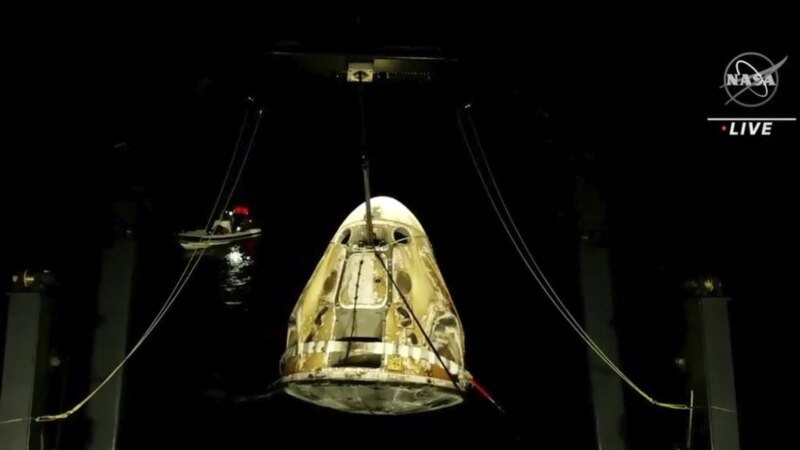 SpaceX brought four astronauts home with a midnight splashdown in the Gulf of Mexico on Friday, capping the busiest month yet for Elon Musk’s taxi service.

The three American astronauts and a German in the capsule were floating off the coast of Florida, near Tampa, less than 24 hours after leaving the International Space Station. NASA hoped to have them back in Houston later in the morning.

“That was a great trip,” said Raja Chari, the capsule commander. As for the reintroduction to gravity, he noted: “Just one complaint. These water bottles are super heavy.”

Chari, NASA’s Tom Marshburn and Kayla Barron, and the European Space Agency’s Matthias Maurer emerged from the capsule an hour after splashdown, waving and thumbing as they were wheeled out for medical checks.

Their departure from the space station on Thursday was bittersweet as they hugged the seven remaining astronauts.

“It’s the end of a six-month mission, but I think the space dream lives on,” Maurer said.

SpaceX flew in its replacements from the US and Italy last week, after completing a charter trip to the station for a trio of businessmen.

That equates to two manned launches and two splashdowns in just one month. Musk’s company has now put 26 people into orbit in less than two years, since it began transporting astronauts for NASA. Eight of those 26 were space tourists.

“Satellites are nice, but the people who fly them are a little bit special and a little bit different, and the team here understands that,” he told reporters. “There’s a sense of relief and a sense of accomplishment that you know you’ve done something good.”

NASA is more impressed than ever, given the hectic pace of SpaceX lately. The only issue of note on the last flight was a mechanical nut that came loose and floated away from the SpaceX capsule after undocking on Thursday. Officials assured everyone that it would not pose a danger to the space station.