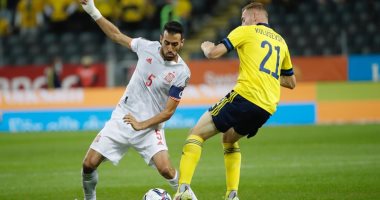 Spain fell 2-1 to its host Sweden, in the match between the two teams, Thursday evening, at the “Friends Arena” in Solna, as part of the fourth round of Group B of the European qualifiers for the 2022 World Cup..

The loss of Spain against Sweden is the first for the Matador team in the World Cup qualifiers in more than 28 years.

The “Opta” statistics network reported that the Spanish national team He suffered his first World Cup qualifying defeat since March 1993 against Denmark (1-0), to end a series of 66 qualifying matches without defeat (52 wins and 14 draws).

The Spanish national team also continued its contract against Sweden outside its stadium, where La Roja played 6 international matches against Sweden (4 Draws, 2 Losses), more than any other visiting team without a win at all.

Spain coach Luis Enrique excluded from the list of Matador, young midfielder Pedri, the Barcelona star, after he had a two-week break due to stress as a result of matches last season, and his participation in the European Nations and then the Tokyo Olympics..

Spain entered the match with the following formation.