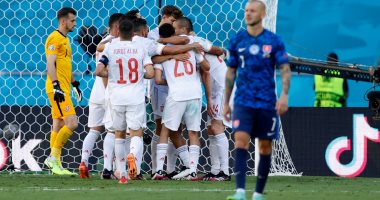 Sweden will host Spain at 9:15 pm today, Thursday, at the Friends Arena in Solna, as part of the fourth round of Group B of the European qualifiers for the 2022 World Cup.

Spain enters the match tonight, occupying the top of the group with 7 points from two wins and a draw, while Sweden is in second place with 6 points.

Georgia and Kosovo will meet in the same group at 6 pm, while Greece will not play in this round.

Spain coach Luis Enrique excluded from the list of Matador, young midfielder Pedri, the Barcelona star, after he received a two-week break due to fatigue as a result of matches last season, and his participation in the European Nations and then the Tokyo Olympics.

The Spain squad also witnessed the absence of all Real Madrid players, so Enrique continued to exclude the royal team players, as he did in the recent Euro 2020 championship, while the Swedish team is absent, the veteran star Zlatan Ibrahimovic, AC Milan striker.

Spain will face Sweden today, then on Sunday the 5th of the same month against Georgia, and finally Kosovo 3 days later.

The Spain squad for the 2022 World Cup qualifiers came.