Spinning tot! Adorable moment giggling toddler tries to copy his dog as she chases her tail


Spinning tot! Adorable moment giggling toddler tries to copy his dog as she chases her tail

This is the adorable moment a toddler makes himself dizzy when he tries to copy his dog as she chases her tail.

Hilarious footage shows Riley squealing with delight as he watches Bella spin in circles trying to bite her own tail.

Riley then giddily begins his own spinning session while laughing and watching the five-year-old dog.

After completing a few rotations Riley gets dizzy and clumsily falls to the ground. 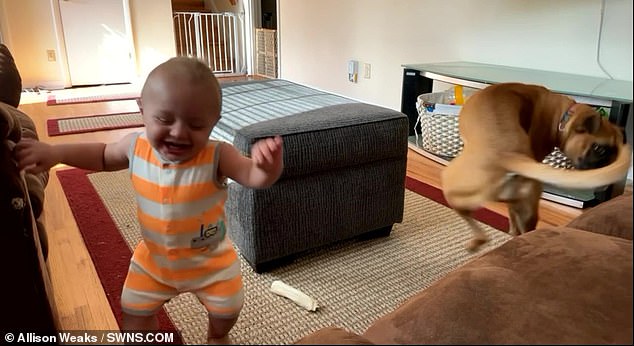 Allison Weaks, 25, caught her one-year-old son Riley attempting to copy their boxer dog Bella, five, while she chased her tail at the family’s home in Huntsville, Alabama

He immediately picks himself back up and starts spinning again and it isn’t long before he takes another tumble to the ground.

This time when he stands up he seems a little less sure of his footing and the clip ends with Riley falling into the sofa.

Ms Weaks said: ‘Boxers typically have their tails docked (removed), but Bella doesn’t and she chases it all the time.

‘On this certain day Riley took interest in that and he was just spinning circles like she was, and he thought it was hilarious.’

She added: ‘Bella chases her tail on command. Riley loves it, he’ll laugh forever at it.’ 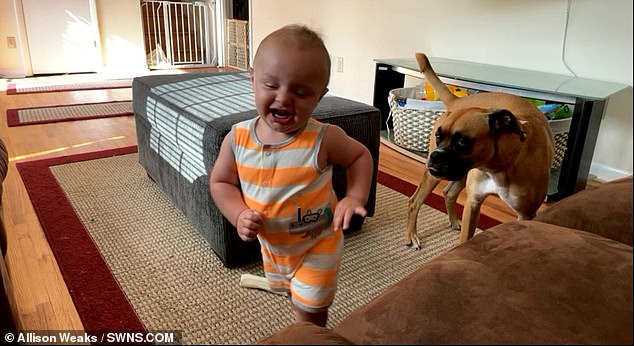 While Riley normally loves to watch Bella’s frantic spins, Ms Weaks said this was the first time he attempted it himself.

In the video, Riley spins on his own for almost 20 seconds before tumbling to the ground, a feat that Allison was impressed by.

‘Doing the whole spinning thing at his age is really hard for them to do, but he did really well,’ she said. 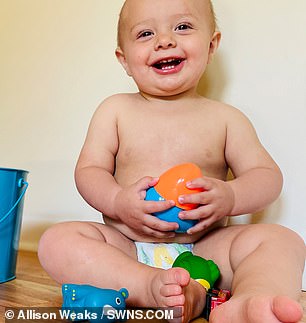 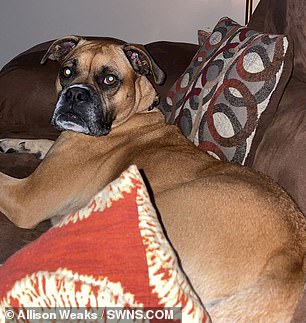 While Riley normally loves to watch Bella’s frantic spins, Ms Weaks said this was the first time he attempted it himself

Ms Weaks said that Riley and Bella have been the best of buddies for Riley’s whole life.