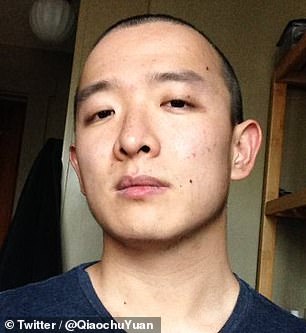 Qiaochu Yuan was slammed on Twitter after posting a 35-tweet thread about his resentment towards his parents for gifting him $100,000 and paying for his college tuition and expenses

A ‘extremely privileged’ man has been slammed on Twitter over the weekend for complaining that his parents give him tens of thousands of dollars.

Qiaochu Yuan wrote a 35-tweet thread on Thursday detailing his resentment towards his parents for always financially supporting him, even though he has not had a job in three years.

He started off the viral thread by saying he took ‘a medium dose of acid’ a few days prior, and ‘admitted some things to myself’ about his financial situation, including admitting to himself that he resented his mother after she gave him $100,000 for his birthday last August when he was not working.

‘In January,’ he continued, ‘I had the thought that I should “figure out money and career stuff” and then I proceeded to mostly avoid the topic, occasionally tentatively having feelings about it, but not in a very satisfying way.’ 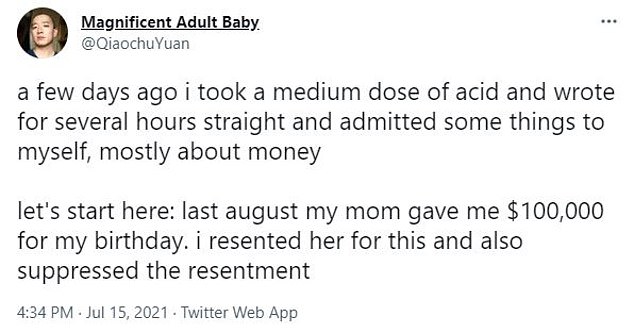 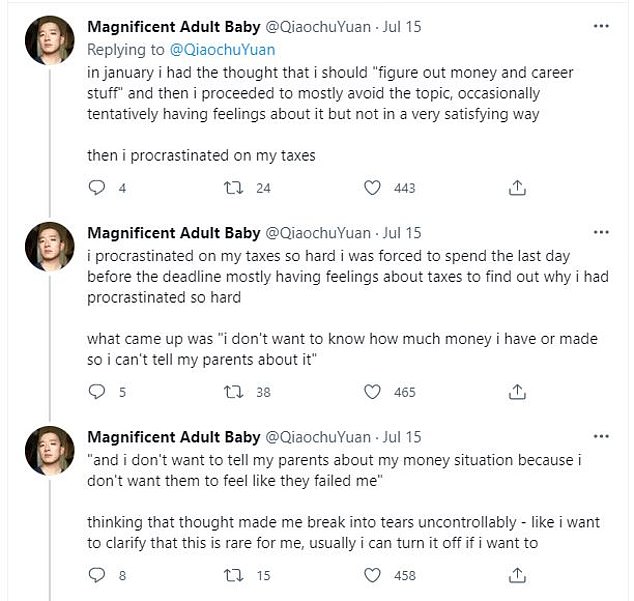 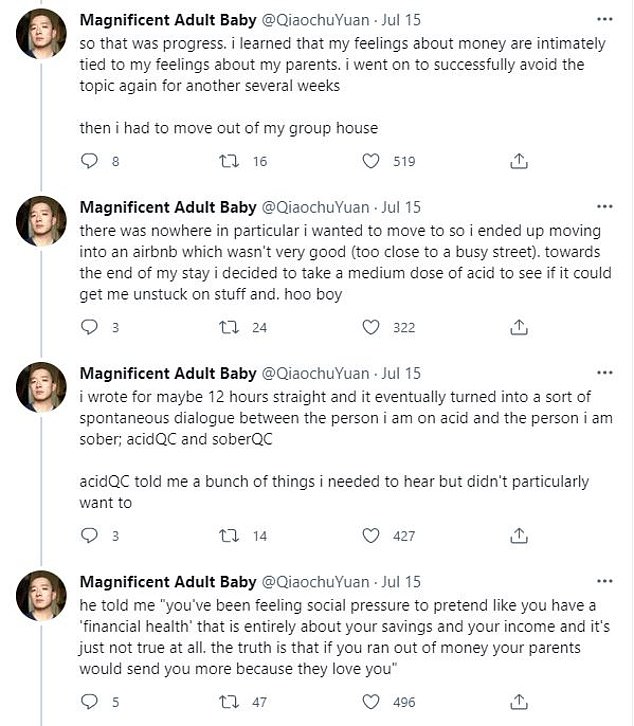 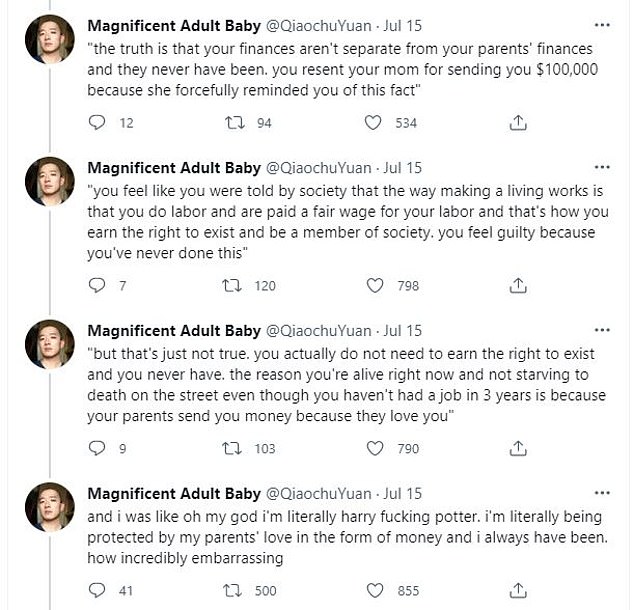 Yuan shared his thoughts about money after an acid trip, in which he said he realized his parents money has sheltered him from the realities around him

He said he wrote ‘for maybe 12 hours straight’ during the trip, ‘and it eventually turned into  sort of spontaneous dialogue between the person I am on acid and the person I am sober.’

The acid version of himself, Yuan said, told him: ‘You feel like you were told by society that the way making  living works is that you do labor and are paid a fair wage for your labor, and that’s how you earn the right to exist and be a member of society.

‘You feel guilty because you’ve never done this,’ his revelation continued. ‘But that’s not true. You actually do not need to earn the right to exist and you never have.

‘The reason you’re alive right now and not starving to death on the street even though you haven’t had a job in three years is because your parents send you money because they love you.’

At that point, Yuan said he had another epiphany. ‘I was like “Oh my God, I’m literally Harry f****** Potter. I’m always being protected by my parents’ love in the form of money.’ 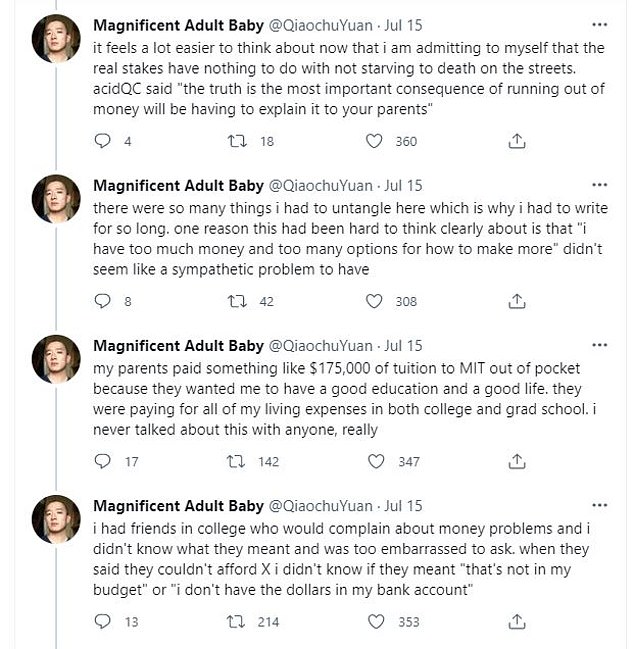 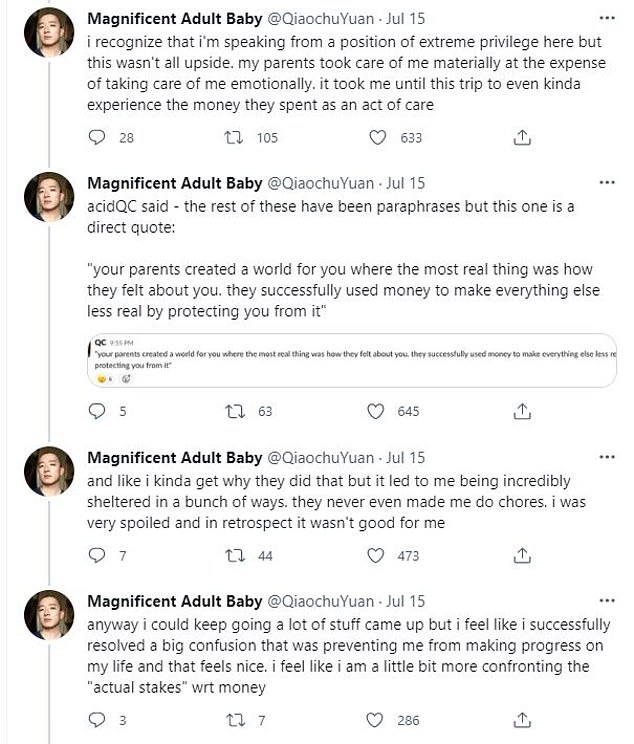 He said he also realized that ‘the most important consequence of running out of money will be having to explain it to your parents,’ who had already paid $175,000 out of pocket ‘because they wanted me to have a good education and a good life.’

‘I had friends in college who would complain about money problems and I didn’t know what they meant, and was too embarrassed to ask,’ he continued, adding that he recognized he was tweeting ‘from a position of extreme privilege here, but this wasn’t all upside.’

‘My parents took care of me materially at the expense of taking care of me emotionally,’ Yuan wrote. ‘It took me until this trip to even kinda experience the money they spent as an act of care.

‘And like I kind of get why they did that, but it led to me being incredibly sheltered in a bunch of ways. They never even made me do chores. I was very spoiled, and in retrospect, it wasn’t good for me.’

He concluded by saying the only stakes he has for not making enough money is that it will be a burden on his parents, noting that his father had already told him he was ‘holding off on retiring because he was worried about me.’ 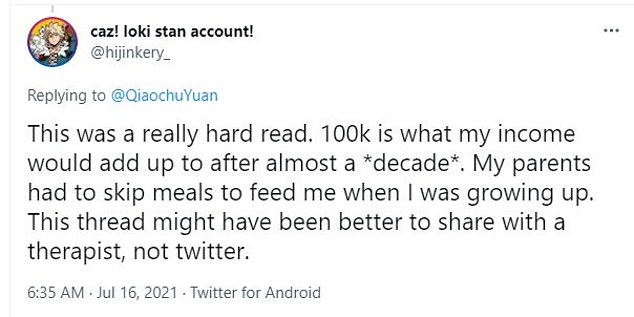 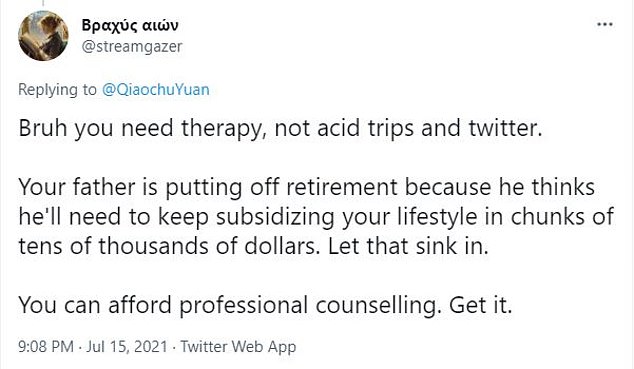 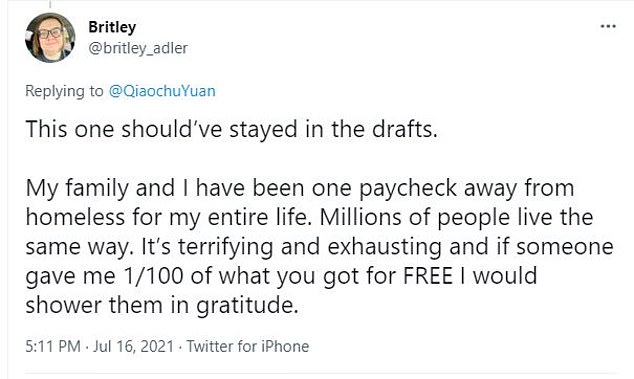 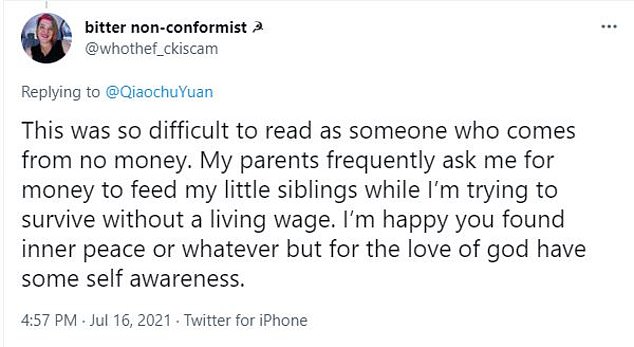 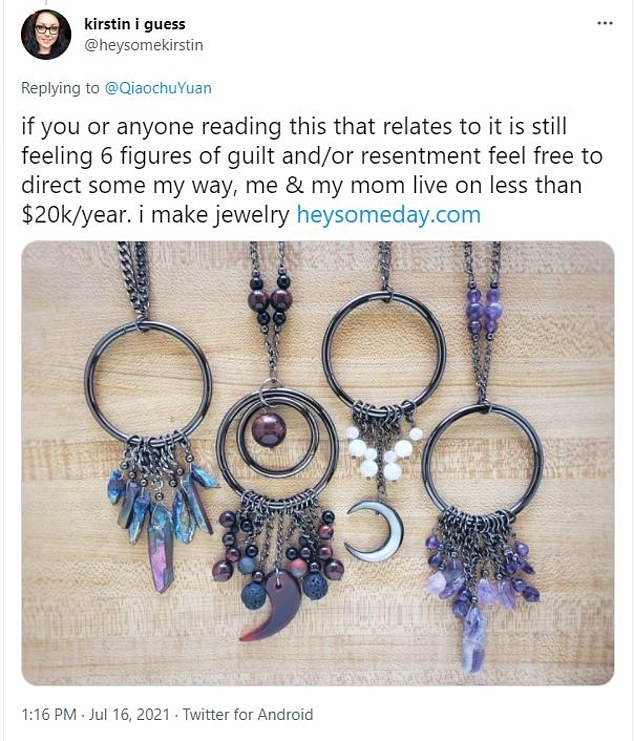 Almost immediately after posting about his realizations, Yuan was attacked on Twitter for being out-of-touch with the realities of many Americans

Almost immediately after posting his thoughts, though, Yuan faced some backlash from people claiming he is spoiled.

One user, @whothef_ckiscam, said they were happy Yuan ‘found inner peace or whatever, but for the love of God, have some self-awareness,’ while another, who identifies themselves as ‘Caz’ on their profile, said it ‘was a really hard read,’ noting $100,000 is ‘what my income would add up to after almost a decade.’

‘My parents had to skip meals to feed me when I was growing up,’ Caz continued. ‘This thread might have been better to share with a therapist, not Twitter.’

‘Your father is putting off retirement because he thinks he’ll need to keep subsidizing your lifestyle in chunks of tens of thousands of dollars. Let that sink in.’

Kirstin also wrote: ‘If anyone reading this that relates to it still feeling six-figures of guilt and/or resentment feel free to direct some money my way. Me and my mom live on less than $20,000 a year.’

Another user, @gsusswept, also wrote: ‘Wow that’s rough man, I mean I’ve been homeless since my apartment burnt down last year, but I guess being handed a hundred thousand dollars could give one a sad too,’ and Britley Adler told Yuan, ‘this one should’ve stayed in the drafts.

‘My family and I have been one paycheck away from homeless my entire life,’ she wrote. ‘Millions of people live the same way. It’s terrifying and exhausting, and if someone gave me 1/100 of what you got for FREE I would shower them in gratitude.’

@Tennisonok, meanwhile, wrote that her mother stole money from her for cocaine when she was in high school, and she ended up in debt because she could not get a job without a car.

‘I faced homelessness four times and an abusive relationship because of my financial situation,’ she wrote. ‘Sucks you got $100,000, though.’

By the next day, Yuan created another thread to defend himself, noting that he received nearly a dozen messages from people ‘being like “thank you for writing the money thread,'” and ‘”I’m in this position too and it’s so hard to talk about.'”

‘That’s who I write these threads for,’ Yuan said.

Chancellor Rishi Sunak is braced for an increase in interest bill

Nagorno-Karabakh: Civilians and churches under fire