And the newest stars confirmed for the docu-soap, which follows the lives of Byron Bay’s hottest influencers, are glamorous sisters Jessica and Lauren Johansen Bell.

Having their own Baywatch moment, the genetically blessed duo stripped down to skimpy swimwear as they ran across the sand and frolicked in the surf in scenes filmed earlier this month. 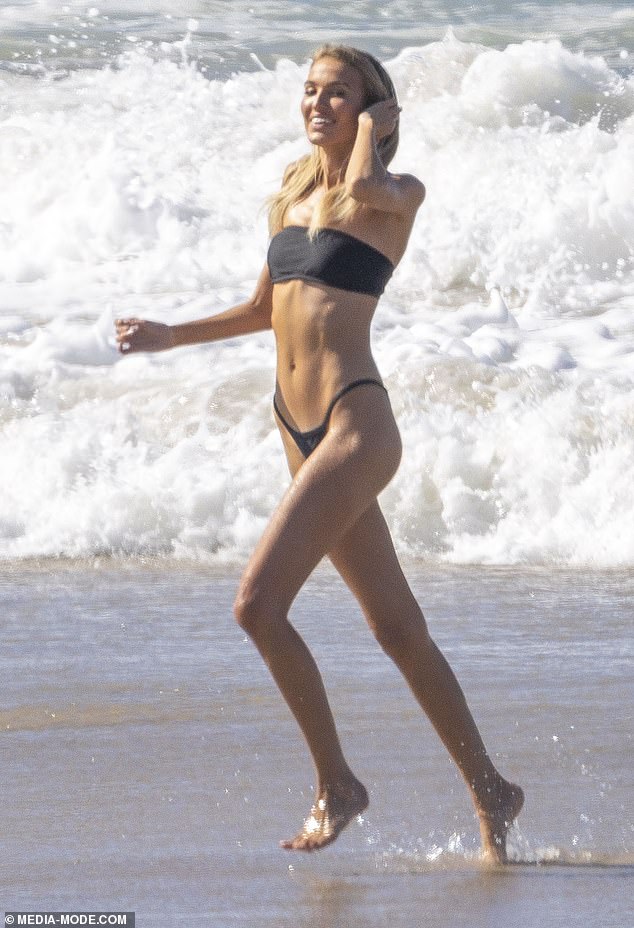 Lauren, who is represented by Que Models and has more than 11,000 Instagram followers, showed off her washboard stomach and trim pins in a black bandeau bikini top and G-string briefs.

She ran one manicured hand flirtatiously through her blonde tresses and smiled for the camera, as she dashed across the sand and splashed about in the surf.

The Norwegian-Australian beauty ensured she was primped to perfection, opting for glamorous makeup. 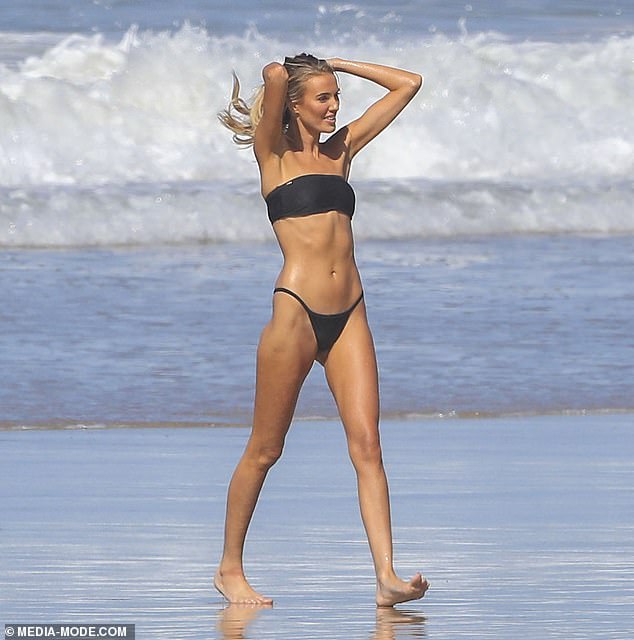 Model figure: Lauren, who is represented by Que Models, showed off her washboard stomach and trim pins in a black bandeau bikini top and G-string briefs 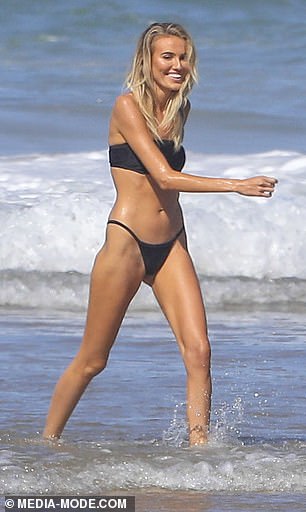 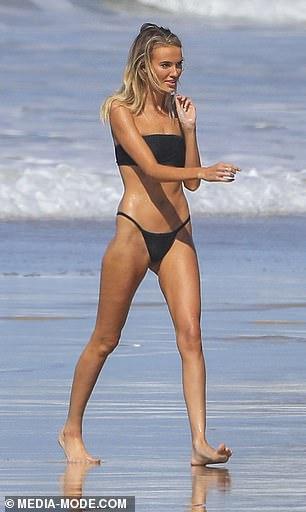 Ready for her close-up! The Norwegian-Australian beauty ensured she was primped to perfection, with glossy blonde tresses and a full face of makeup 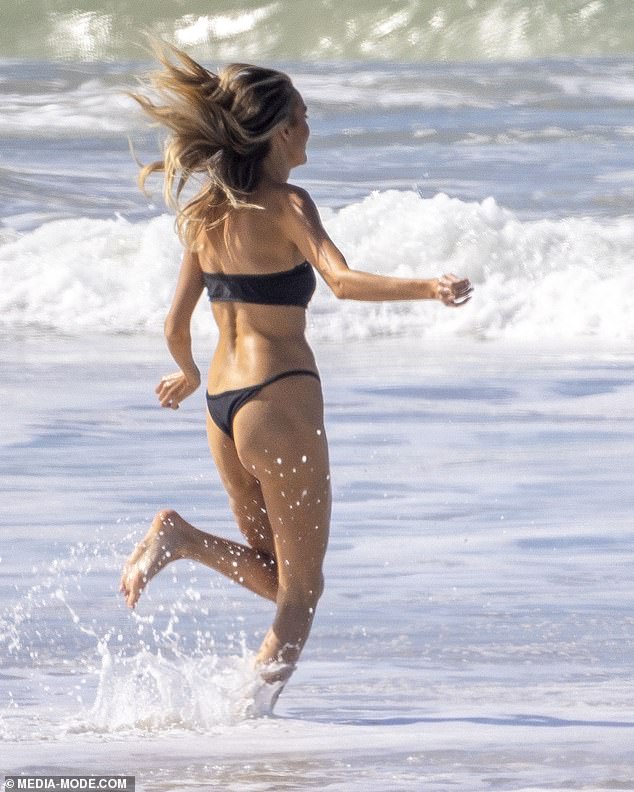 Splish splash: Lauren, who has over 11,000 Instagram followers, splashed about in the surf

After drying off with a towel, Lauren changed into a casual ensemble consisting of ripped denim shorts and a paperboy cap, and kept hydrated with a cool drink.

Lauren’s sister Jessica was close by, filming scenes in a white one-piece swimsuit and denim shorts.

Her long brunette locks flowed in the breeze and, like her sister, her makeup was ultra glamorous. 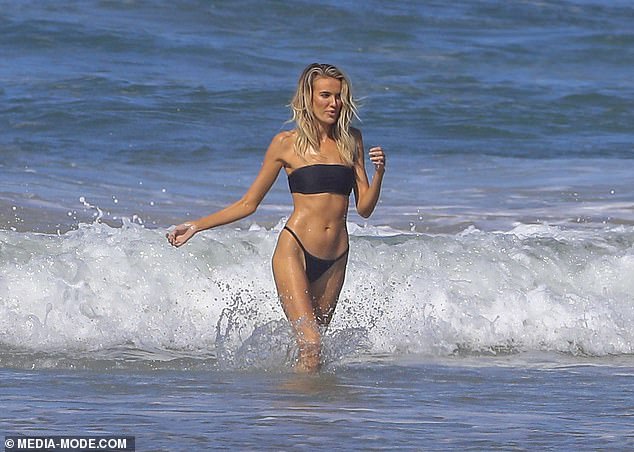 In her element: Lauren looked sensational as she filmed scenes for the docu-soap 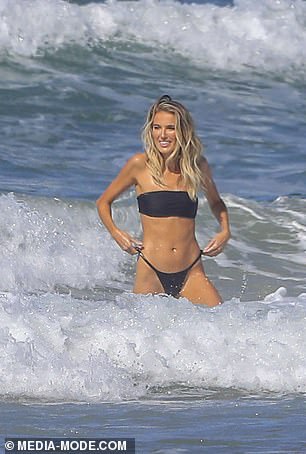 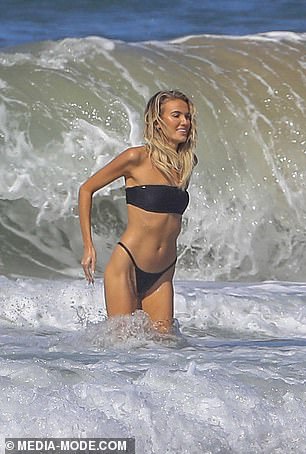 A pro: At one stage, she fixed her skimpy briefs, preventing a possible wardrobe malfunction 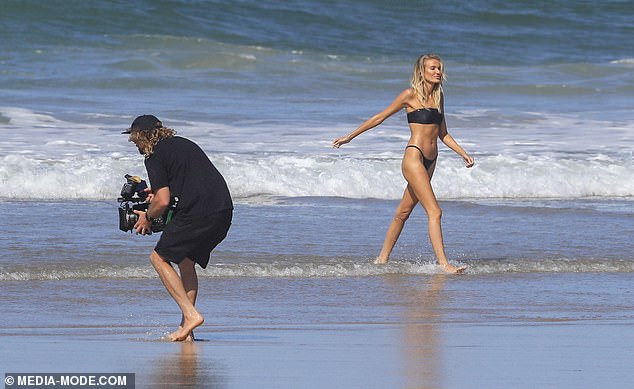 Production: Crew captured every moment for the show, which has attracted much criticism 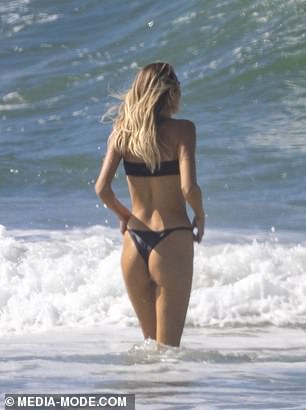 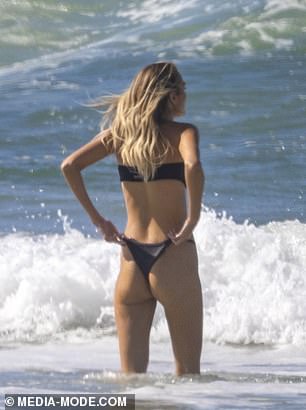 Soaking it all in: Lauren gazed out into the distance during filming

Jessica, who has just over 5,000 Instagram followers, happily chatted with the crew.

Despite her rather modest Instagram following, Jessica’s star is slowly but surely on the rise.

She has her own fashion label, Johansen, and two of her dresses have been worn by none other than reality star and billionaire cosmetics mogul Kylie Jenner.

In 2018, Kylie wore The Corset Jumper dress in white as well as The Silk Cha Dress in shade latte while testing out a new lip shade from her Kylie Cosmetics collection. 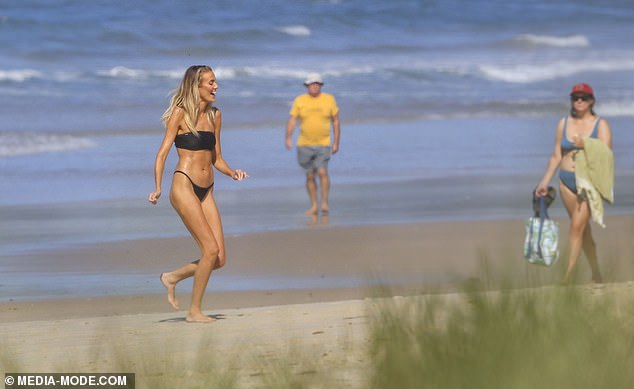 Locals: Lauren beamed as she ran across the sand while locals watched on 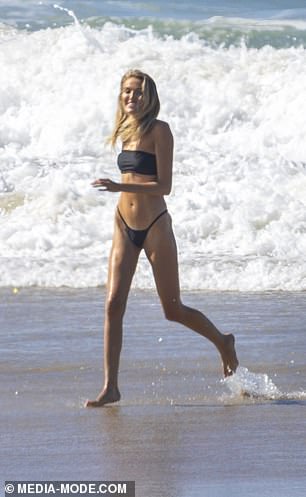 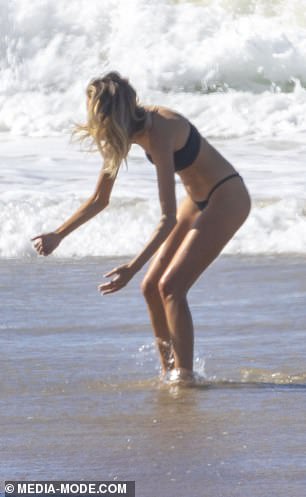 In action: She pulled a number of playful poses as cameramen continued filming

Jessica previously told Daily Mail Australia: ‘It’s not about the clothes, it’s about who is wearing them.’

Her sartorial achievements are all the more impressive given the young creative is entirely self-taught.

‘I started unofficially designing when I was 16, always cutting up my own clothes and altering them,’ she told FEMAIL. 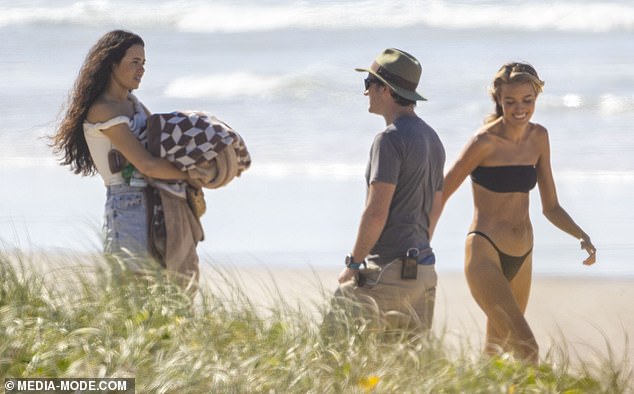 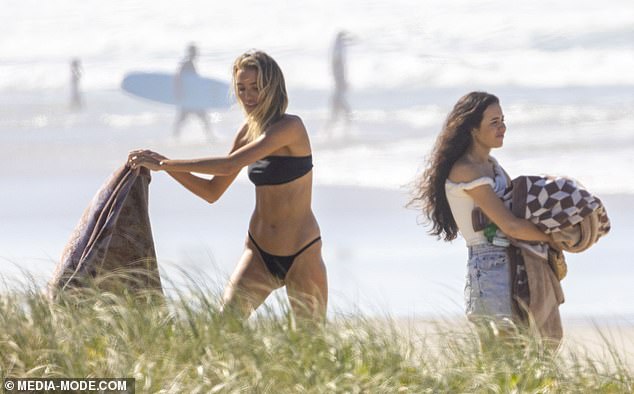 Drying off: Lauren dried off after filming scenes for the show that will no doubt propel her to fame 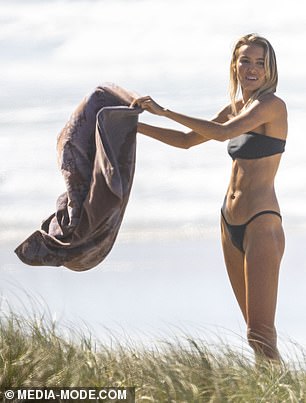 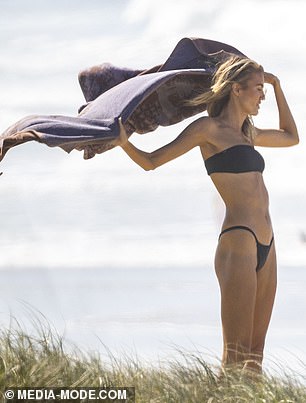 Lean: Lauren’s skimpy swimwear ensured all eyes were on her figure 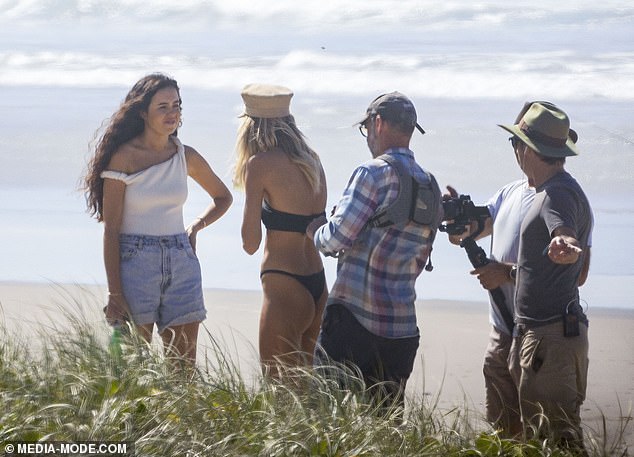 Genetically blessed pair: Jessica, who has her own fashion label called Johansen, accentuated her trim figure in a white one-piece swimsuit and denim shorts

Just eight months after starting the label, she opened her own store in Byron Bay.

Also confirmed to appear on the show are former reality stars Nathan Favro, who rose to fame on The Bachelorette, and Elias Chigros, who appeared on Love Island. 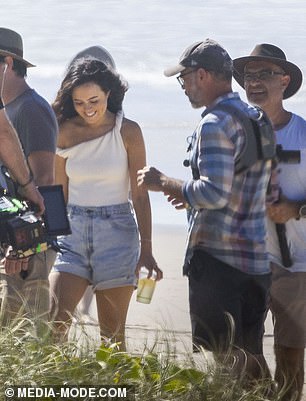 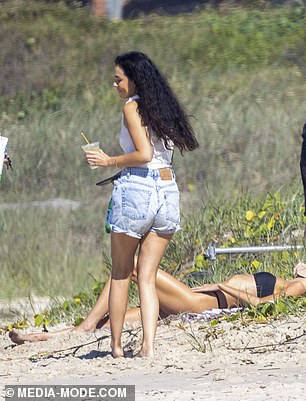 Thirsty work: Jessica chatted happily with the crew and kept hydrated with a cool drink 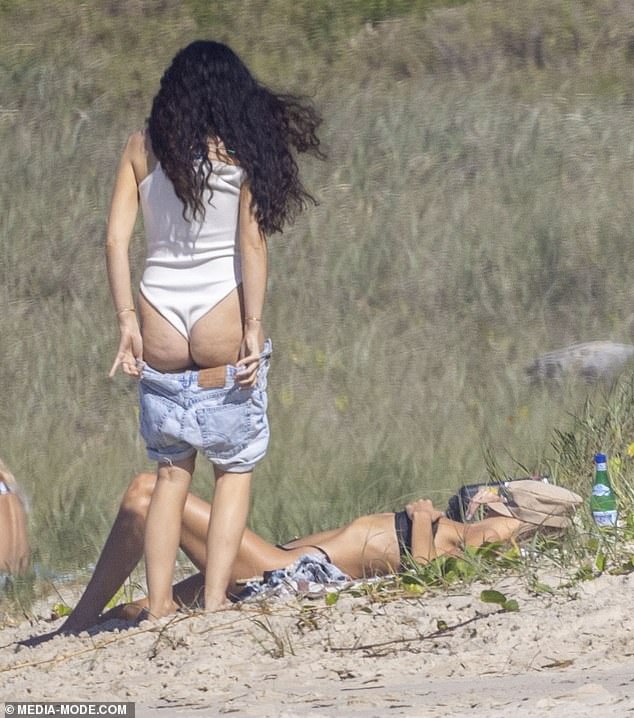 Passionate about fashion: ‘I started unofficially designing when I was 16, always cutting up my own clothes and altering them,’ she previously told Daily Mail Australia

The unveiling of the cast comes after Netflix was recently forced to apologise to the stars of the show for describing them as ‘influencers’ and ‘hot Instagrammers’. 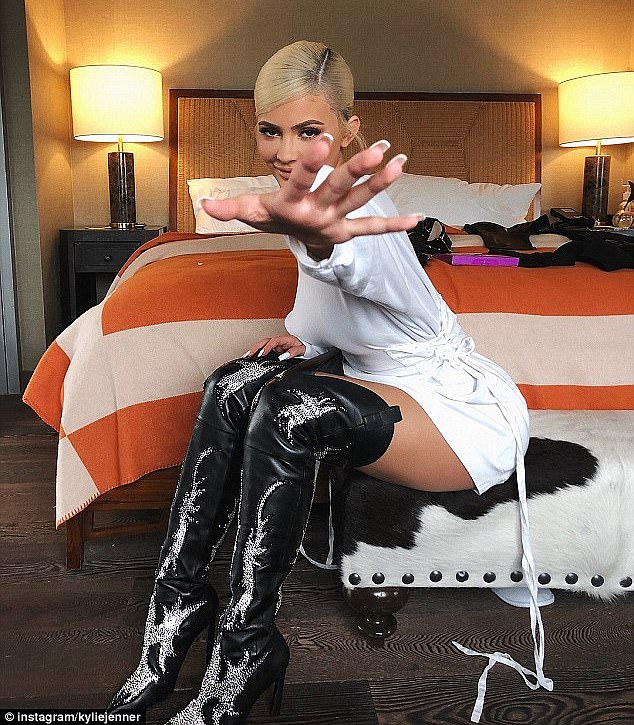 Famous fan: In 2018, Kylie Jenner wore The Corset Jumper dress (pictured) from Jessica’s label in white, as well as The Silk Cha Dress in shade latte 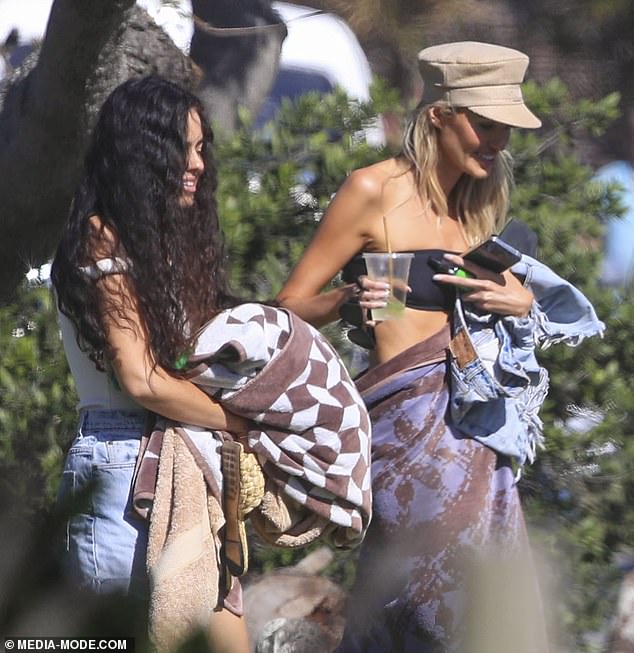 A day’s work: Jessica and Lauren were pictured leaving the shoot, carrying all their belongings 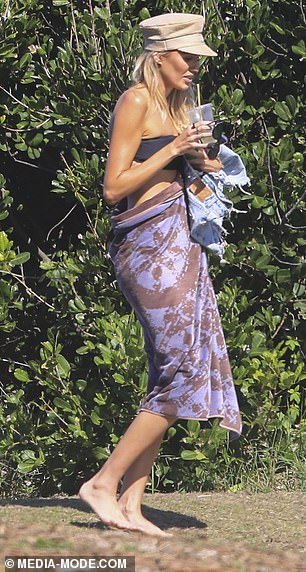 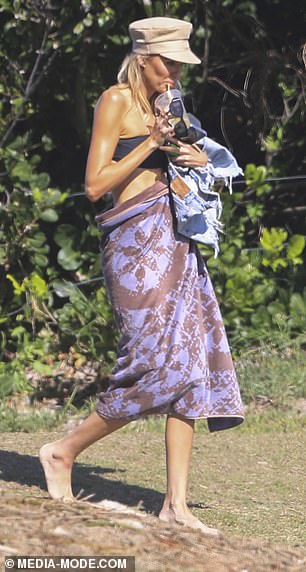 Chic: Lauren draped a towel around her waist and added a chic paperboy cap to her ensemble

‘They are artists, musicians, entrepreneurs, business owners, models, on a spiritual journey and more,’ Ms Luu said, apologising for the wording.

‘Most of them hated the press release too! Did a lot of apologising that week. Fired the PR team (lol joking about firing, we’re all learning together).’ 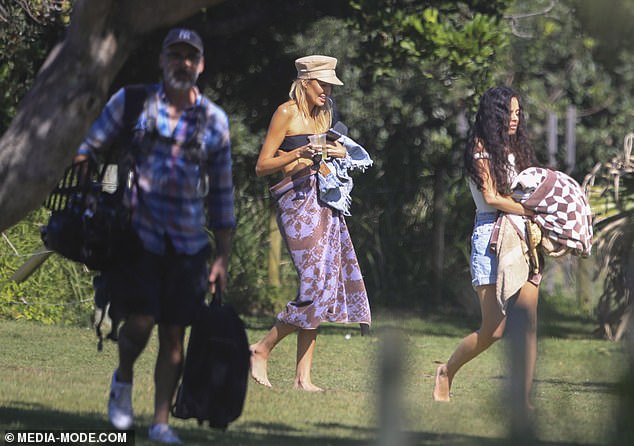 Apology: The unveiling of the cast comes after Netflix was recently forced to apologise to the stars of the show for describing them as ‘influencers’ and ‘hot Instagrammers’