Sport 2050: Climatecast – a weather forecast from the future


Imagine a slow-motion replay of Rafael Nadal in action at Wimbledon, beads of sweat dripping from him, the sparse crowd frantically fanning themselves with sun hats, folded up programmes, anything they can find.

Now, picture an exhausted-looking James Anderson sluggishly stepping up to bowl in Australia’s sweltering Melbourne Cricket Ground. Fielders searching for shade, concentration lapsing – the haze in front of them obscuring their view.

A few hardcore fans are in the stands, warm beer in hand, but most have left their seats already, either unable to cope with the harsh sun and smoky air – a by-product of area’s wildfires – or preferring to watch on the TVs in the air-conditioned concourse.

Too dramatic? These are potentially common occurrences in the near future because of climate change and rising global temperatures.

This article is written using scientifically-backed Met Office (MO) projections, and provides a future vision of how avoidable climate change may affect sport.

(The information in this piece is based on forecasts for 30 years into the future and therefore includes a degree of uncertainty). 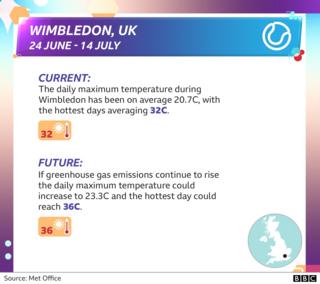 It’s consistently inconsistent year on year, and only in recent times have us Brits experienced temperatures in line with sunnier parts of Europe – the State of the UK Climate Report in 2019 revealed the top 10 warmest years on record have all occurred since 2002.

But for sports fans, one constant, (with the exception of 2020, of course), is the tennis at Wimbledon. Sometimes there are beautiful balmy days, and every now and again, a total wash-out.

But the Met Office’s future modelling predicts play at the All England Club could become an all-too uncomfortable affair by 2050.

“However, the highest maximum temperature experienced during the Championships increases 4C, from 32C in the 2010s to 36C in the 2050s. A temperature of 39C to 40C is plausible in this period,” say the team of climate science experts at the Met Office.

“As such, the potential impacts of heat stress on competitors and spectators will become an increasing issue.

“There will be a need for the Championships to consider potential impacts from elevated heat conditions, however, events where a day of play will need to be suspended due to extreme heat risks will be very rare.”

Although many are using creative and innovative methods of saving water, it is sometimes tricky for them to justify using any sprinklers at all when parts of countries like South Africa are already experiencing long periods of drought.

The Met Office’s modelling shows that there could be 50% more droughts towards the middle of the century than there are now due to lack of rainfall during the essential winter recharge period.

“Not only is it getting drier in the important winter season, when reservoirs recharge, but summers are also becoming drier [in South Africa] too,” say the team of Met Office experts.

“This applies to the whole of the Western Cape, which may mean maintaining golf courses will be challenging in the future and prevent moving tournaments to other locations like in 2018 [When the Cape Town Open was moved due to drought].”

At the other end of the spectrum, coastal courses in areas of high rainfall – including Donald Trump’s Doonbeg in Ireland – are experiencing flooding from coastal erosion caused by rising sea levels.

That particular course has applied for permission to build rock barriers to protect its holes from the encroaching sea.

Baseball and other US sport

In 2017, Hurricane Harvey caused catastrophic flooding and widespread damage to the city of Houston and surrounding towns.

Schools, hotels and homes were damaged and power outages lasted weeks in some areas.

Just over two months later, the Houston Astros won the World Series, despite having to play many of their home games in an alternative location.

The Met Office says cities where hurricanes are already frequent will continue to experience them due to oceans warming and sea levels rising.

This may result in more flooding on a similar scale to Harvey or worse.

Because of human activities such as groundwater abstraction, (the process of taking water from a ground source), the city of Houston is sinking. On top of this, scientists are expecting to see about 30cm sea level rise on the adjacent Texas coast by 2050.

Heat stress is already a consideration for all major football tournaments.

Fifa had to introduce regular first and second-half cooling breaks for players at the Women’s World Cup in 2019, which took place in France’s relatively temperate climate.

There, temperatures reached 35C during the semi-finals, and stadium rules were relaxed in order to make sure fans were allowed drinks within the arenas.

Qatar 2022 will be the first ever winter tournament, with matches being played at night in order to avoid the hottest parts of the day.

So are temperatures expected to rise further, 30 years from now?

With the example of our imagined World Cup in Guangzhou, China, 2050, heat could increase to a point that the number of days on which match play would not be possible increases many times.

Compared with just 4% in the 2010s, a single model has suggested 38% of days would qualify as “extreme”, with temperatures reaching over 36C and humidity levels over 30%.

These are considered unsafe playing conditions, although further projections from other models may bring this total down.

Overall, there is an 11% increase in the number of tournament days which require limits to play intensity such as shorter games and rolling subs.

Cricket, particularly when played in the southern hemisphere, has arguably been one of the sports hit hardest by environmental issues. 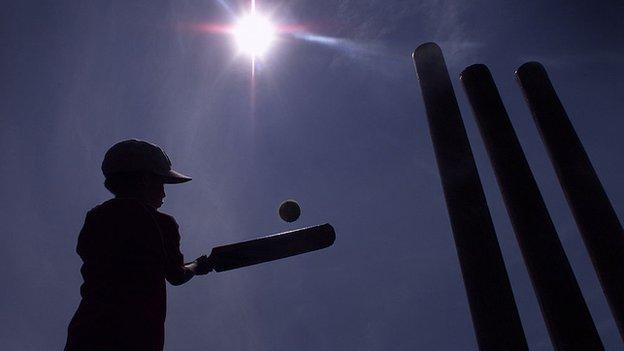 During 2019’s bushfires, Australia spinner Steve O’Keefe described the atmosphere as like smoking “80 cigarettes a day”, and said they were “toxic” conditions to play in.

In 2018, England captain Joe Root was taken to hospital during the final Test of the Ashes in Sydney, when temperatures reached 47.3C.

According to the Met Office projections, things don’t seem to cool off over the next 30 years.

Around Melbourne, there is an average 53% increase in the number of days that will require modification to playing conditions due to heat stresses by 2050 – that’s about seven days out of 21 playing days that could be interrupted in some way.

Further to this, there will be a 67% increase in the number of days requiring a suspension of play – that’s three out of 21 days that could be suspended instead of two out of 21 days.

Cricket Australia says it is committed to supporting the sports industry globally to deliver collective progress on environmental sustainability.

Poor snow conditions have blighted the World Cup ski circuit in recent years, with a number of races being relocated, postponed or cancelled in 2019 and 2020 – not just by global pandemics.

The Winter Olympics in Sochi was the hottest on record and it is predicted many of the former host cities will become unusable by the middle of the century.

The data analysed by the Met Office’s climate science experts show that the number of days below zero will decrease by almost 30% by 2050 for Val d’Isere, a French Alpine resort that hosts a World Cup event.

Vicky Gosling, CEO of GB Snowsport, said: “There is no doubt that changing temperatures are going to have an impact on our athletes and training opportunities, but we have to accept that that’s secondary to the impact it is already having on the wider world.

“As a sport we need to highlight and act on these sustainability issues to enable world class performances, but also to preserve the nature of our sport for generations to come.”

Lebanon in free-fall: 'For me, the country now is a large jail'

You can drink inside a pub, go the movies, hug or take a holiday from tomorrow as Covid rules eased

Haunting final photo of young Hells Angel bikie in an taxi after he was summoned to...