Sports Personality winners: Who won the awards in 2020? 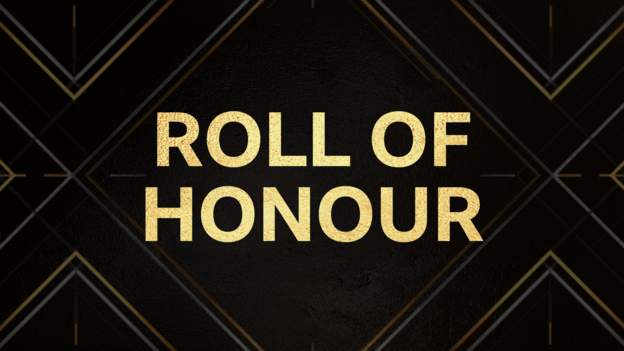 Who were the winners at this year’s Sports Personality of the Year awards?

Sports Personality of the Year

Team of the Year

Key achievement: Won the 2019-20 Premier League title – their first in the top flight in 30 years.

Coach of the Year

Key achievement: Led Liverpool to the Premier League title – their first in the top flight for 30 years.

World Sport Star of the Year

Key achievement: The Russian UFC lightweight champion extended his perfect professional record to 29 wins with victory over Justin Gaethje in October – just months after the death of his father, coach and mentor Abdulmanap. Considered by some to be the greatest MMA fighter of all time, he announced his retirement straight after victory.

Key achievement: The veteran raised more than £32m for the NHS by walking 100 laps of his garden before his 100th birthday.

Sgt Matt Ratana was posthumously named the Unsung Hero award winner. The Met Police officer was killed while on duty in September. He was nominated by East Grinstead Rugby Club, where he was head coach at the time of his death and where he was credited with leading a renaissance at the club.

Key achievement: Tobias, who has cerebral palsy and autism, raised more than £150,000 for charity by walking the equivalent of two marathons on his street despite being unable to stand or walk unaided.

Young Sports Personality of the Year

Key achievement: Won a first senior British title in the women’s 10m platform at the British National Diving Championships, before winning her first solo international gold medal in the same event at the Fina Diving Grand Prix in Rostock, Germany in February.

Key achievement: Raised awareness of child food poverty in the UK with a campaign that resulted in about 1.3 million children in England being able to claim free school meal vouchers in the summer holidays. Further campaigning saw a policy change in November with the government announcing more than £400m to support poor children and their families in England.