If anyone can empathise with Timo Werner right now, it is Sam Kerr. Like Werner, Kerr is one of the best strikers around. Like the German, she was signed by Chelsea with high expectations. And like Werner, the Australian is still finding her feet in English football.

Kerr arrived in the Women’s Super League last November as the all-time leading goalscorer in the American and Australian leagues but a dream start eluded her. Ninety seconds into her debut, she was clean through on goal but blasted over. She found the net only once in six games before coronavirus put a stop to the season. The return to action for one of the league’s highest-paid players did not go to plan, either. 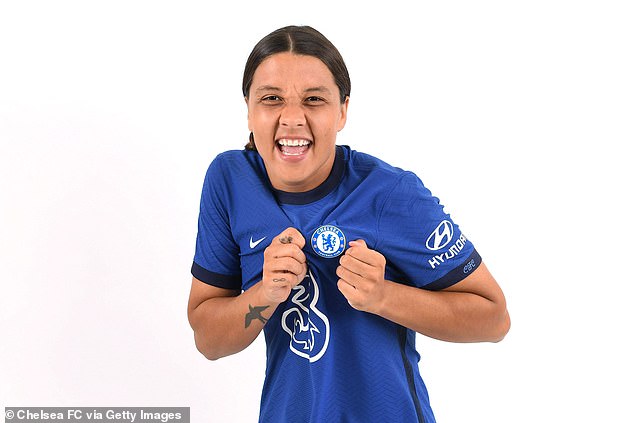 Now the striker is hoping to put those hiccups behind her when she faces City again in a clash between the two title favourites on Sunday.

‘I’d forgotten about that weeks ago!’ she jokes — a trait she is renowned for in the dressing room. ‘Everyone has those days and that’s what I put it down to, get it out of my system and hopefully move on from it. I learned a lot from it and felt like the girls got around me.

‘Any time you have a game like that as a striker, it makes you get back on the training field and work a little bit harder.’

Since then Kerr, 27, has two goals from three league games and there are signs she is starting to rediscover the form she showed across the Atlantic.

What cannot have helped in those early days was the striker quickly learning that her status as the biggest WSL signing in history would not afford her any special treatment. 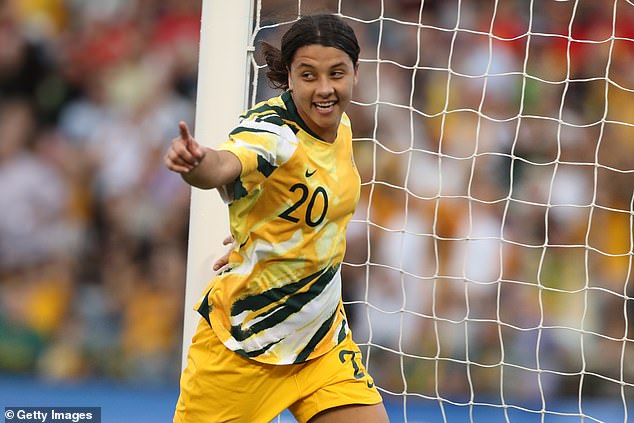 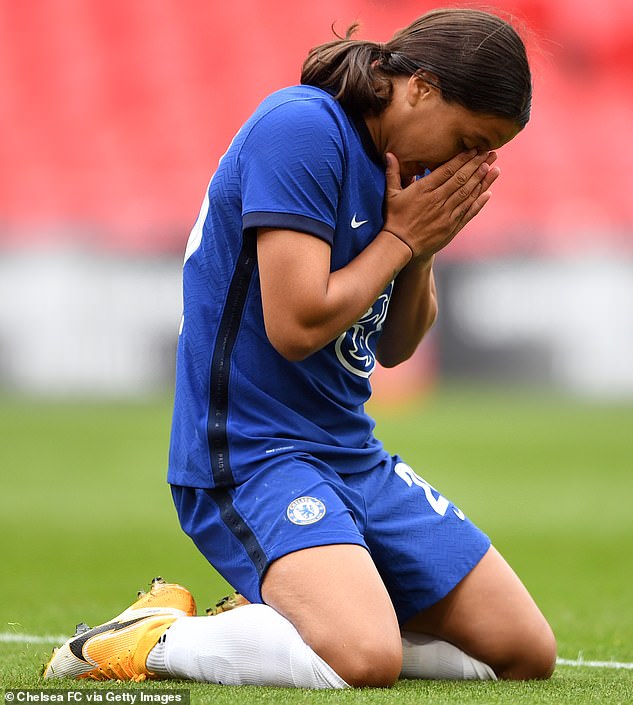 However, 90 secs into her debut with the Blues, she was clean through on goal but put it over

She was unceremoniously taken out by Reading goalkeeper Grace Moloney in her first match, and training with Chelsea’s Millie Bright had given her a taste of what was to come.

‘I had a few of those in training,’ she tells Sportsmail in her first newspaper interview since coming to England.

‘Someone went straight through me and I had a big graze down my leg. Everyone said it was the “Welcome to England” moment but I think the cold weather when I arrived was more of a welcome!’

Kerr, a bubbly character, has overcome her fair share of knocks down the years — most notably at last year’s World Cup.

Australia had come under fire after losing their opening game against Italy but hit back with a 3-2 victory over Brazil. ‘There were a lot of critics but we’re back — so suck on that one,’ a combative Kerr said in her post-match interview that won her a lot of fans.

‘Every interview I just try to be myself, maybe that one was a bit too emotional but I am who I am and I’m not going to change. I think that’s what people really like about me — what you see is what you get. I’m not perfect on or off the field but I’m real, I’m honest.’

Kerr was born in Perth to an Anglo-Indian father and an Indian mother and admits she reluctantly turned to football aged 12 after being forced to quit Aussie rules because she was ‘getting a bit beaten up’ by the boys. 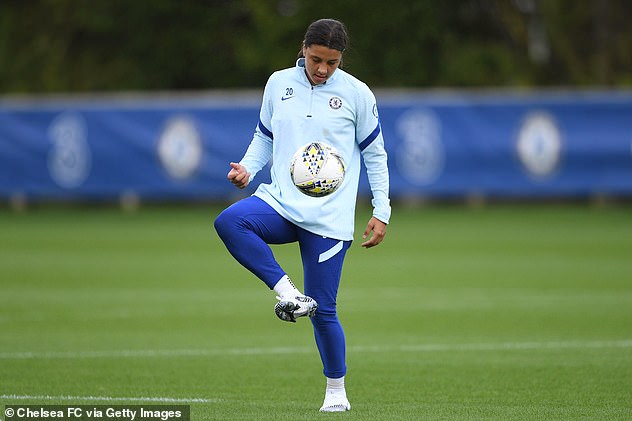 From there, it was a rapid rise to stardom — she made her debut for Australia at 15. ‘I wish I could relive my first game for the national team,’ she says, ‘I didn’t realise at the time how big it was and what it meant for me and my family.

‘It was a little bit surreal, I didn’t really understand the magnitude of what I was about to do. I don’t feel I enjoyed it as much as I would have liked.’

That experience ensured she is used to being in the spotlight but she is having to share centre stage this season following an influx of global stars to the WSL.

‘It’s been awesome to see all the big players coming over,’ says Kerr. ‘The teams are strengthening and you have some big superstars like Alex Morgan (recently signed for Tottenham) coming in. I want the best players going against us so when you win something it’s like, “Yeah, we really earned that”.’ 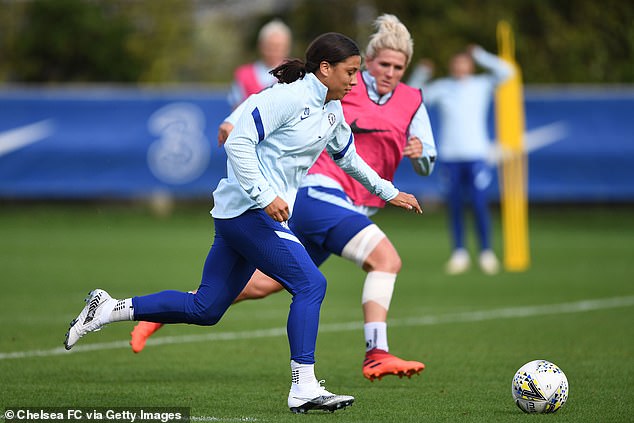 Kerr has been joined at Chelsea by Denmark striker Pernille Harder, who was signed from Wolfsburg for £300,000 — a record transfer fee for the women’s game. Add Beth England to the equation and Emma Hayes’s side have arguably the strongest attack in the league, but with that comes competition.

‘Last year I played with Beth and she was having an amazing year,’ says Kerr. ‘Then you have Pernille, Fran Kirby. We are motivating each other, every time we play there’s competitiveness. That’s what you want — to come to training and feel like you have to perform every day.’

Perform on Sunday against City’s ‘team of superstars’ as Kerr puts it, and her Wembley nightmare will be a distant memory.

Luton Airport: Too many passengers at front of plane caused take-off issue

What to expect from Tesla’s earnings report on Monday?

Tesla Inc. (NASDAQ: TSLA) is expected to announce its second quarter earnings report on Monday after...