Britons woke up to temperatures as low as -8C (18F) this morning on another bitterly cold day as forecasters warned ‘nobody is entirely immune’ to sleet or snow today.

As the UK returns to work after the Easter break, the day started with the mercury at just -2C (29F) in the South of England and -5C (23F) in the North, while isolated parts of northern and central Scotland were even colder.

It comes after a day of chaos yesterday which saw heavy snow, blizzards and sub-zero temperatures before bright sunlight broke out in the late afternoon – one week after last Tuesday brought the hottest March day in 53 years.

Today, Britons in parts of the UK again battled through heavy snow and bitterly cold winds as some commuters returned to the office, with the icy weather set to continue with temperatures feeling barely above freezing.

But as people in England look forward to more lockdown easing next Monday, with the return of al fresco dining, temperatures are set to rise in time with highs of around 16C (62F) expected next week. It comes as: 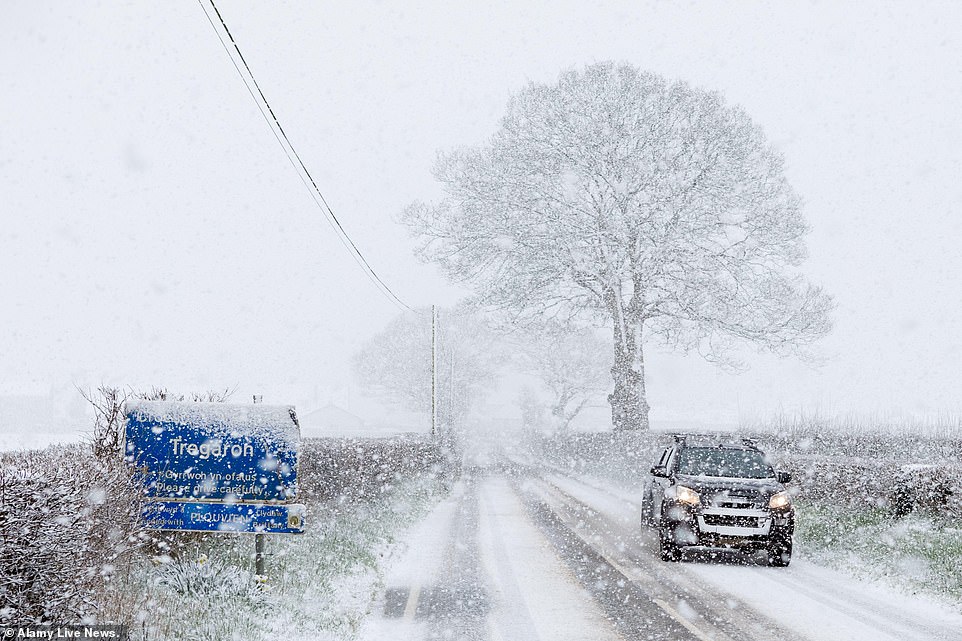 A motorist drives their car through blizzard conditions this morning at Tregaron in Ceredigion, West Wales 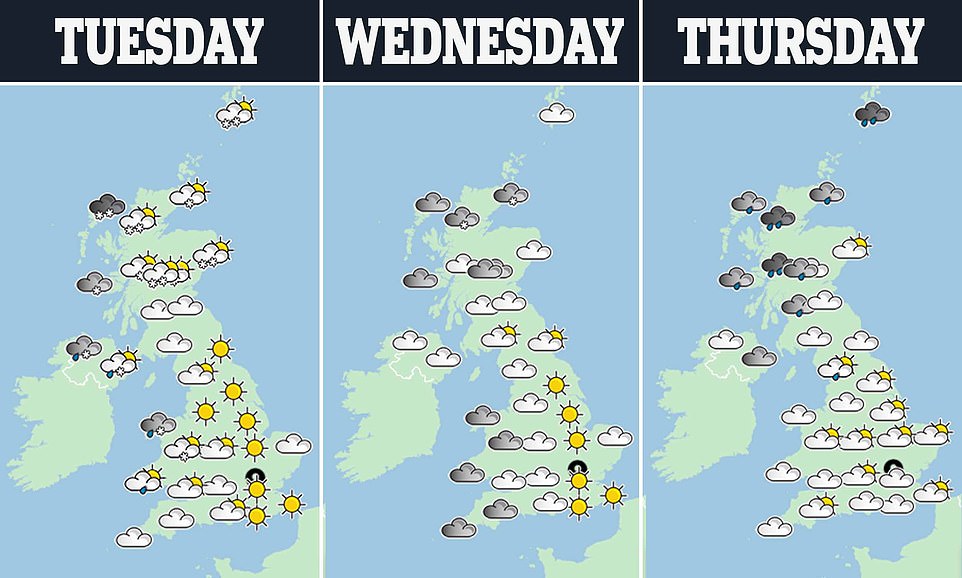 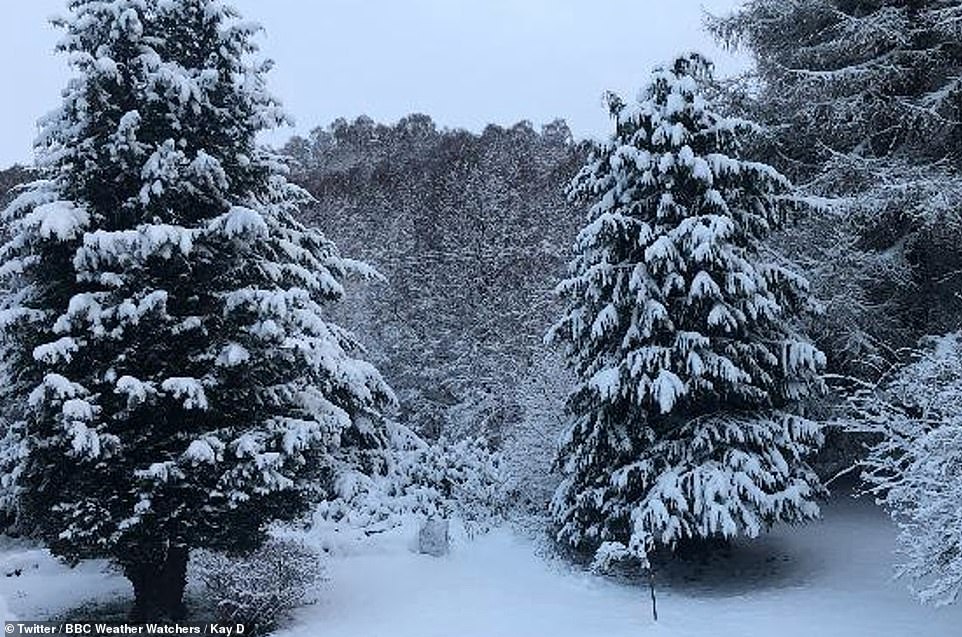 Snow in the village of Balnain in the Scottish Highlands, about 20 miles south west of Inverness, is pictured this morning 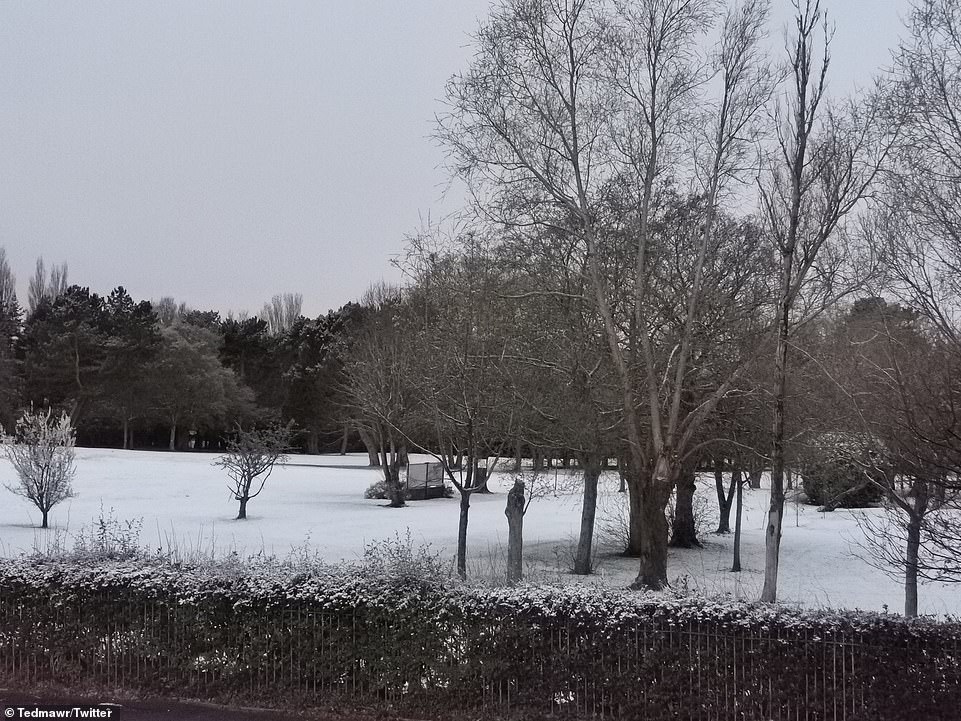 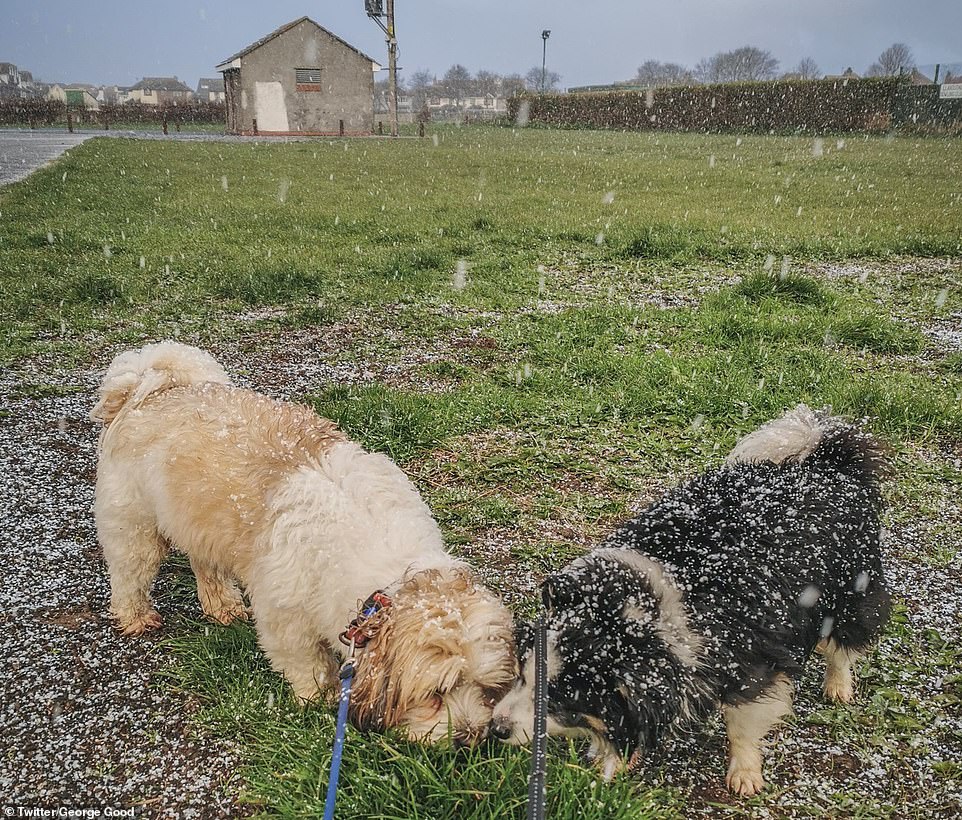 Two dogs out make the most of being out in the snow at West Shore Beach in Llandundo, North Wales, this morning 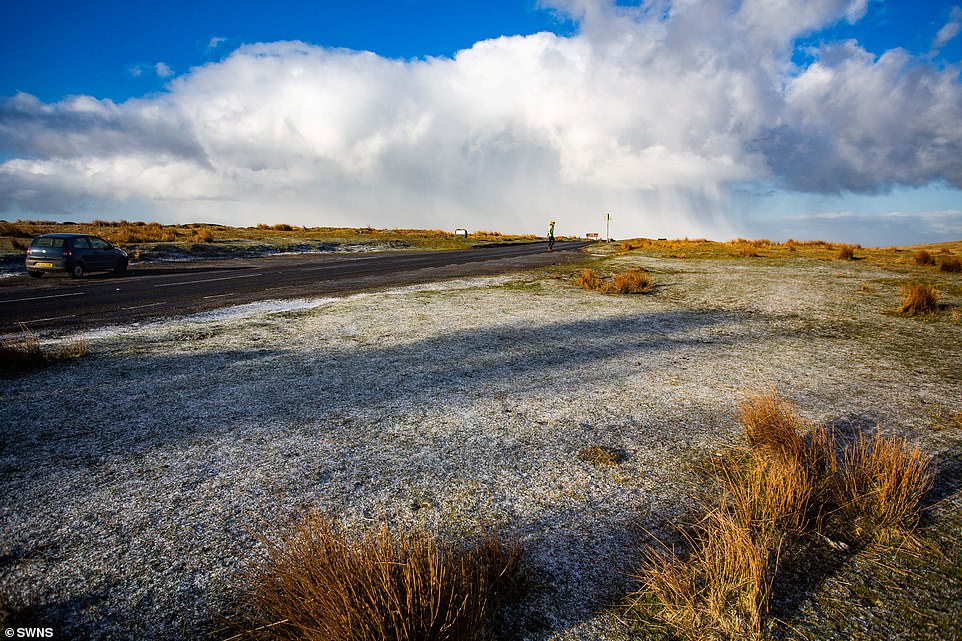 Light snow fell overnight in Princetown, Devon, which is pictured this morning as temperatures drop below freezing

He said: ‘Through the afternoon we might even get a few homegrown showers, so really anywhere tomorrow could catch a wintry shower by the time we get to the end of the afternoon.

‘Nobody is entirely immune to the odd bit of sleet or snow. It won’t last long and it won’t settle for very long either, but nobody is going to be 100 per cent safe from not seeing anything.’ 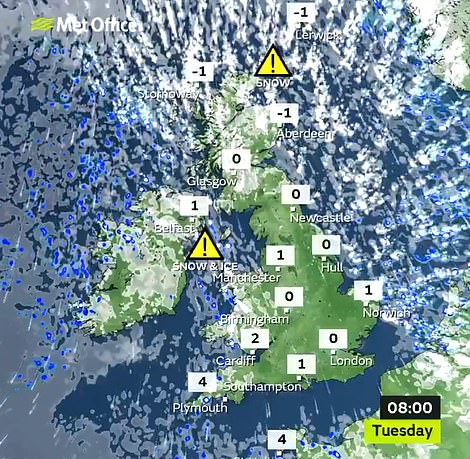 Temperatures are below zero in parts of Britain this morning

Snow warnings are in place for northern Scotland until 10am, with as much as 0.8in (2cm) falling in higher areas.

A separate yellow warning for snow and ice is also in place for west Wales and Northern Ireland until 10am, with up to 1.6in (4cm) expected to fall.

Temperatures are forecast to hit highs of just 8C (46F) in the South of England this afternoon, and around 4C (39F) to 5C (41F) in the North later today.

However, Mr Partridge said the windchill will see most of the south feel ‘a couple of degrees above freezing’, while in Scotland the temperature will feel around -5C (23F).

Tonight is forecast to be the coldest this week, with the mercury plummeting to -5C (23F) in southern and central England in the early hours of tomorrow morning.

In the north of England and into Scotland, temperatures are expected to hover around -6C (21F) to -8C (18F). 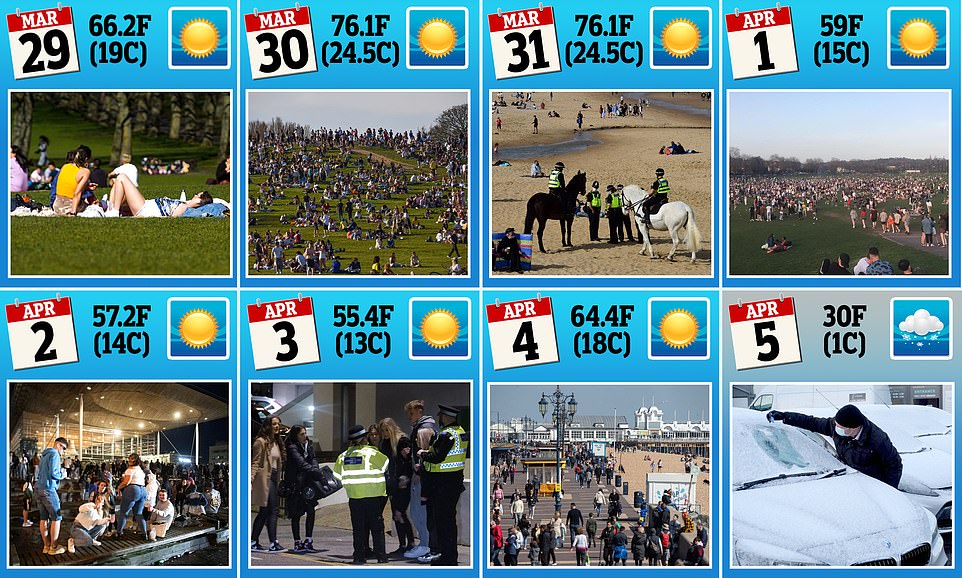 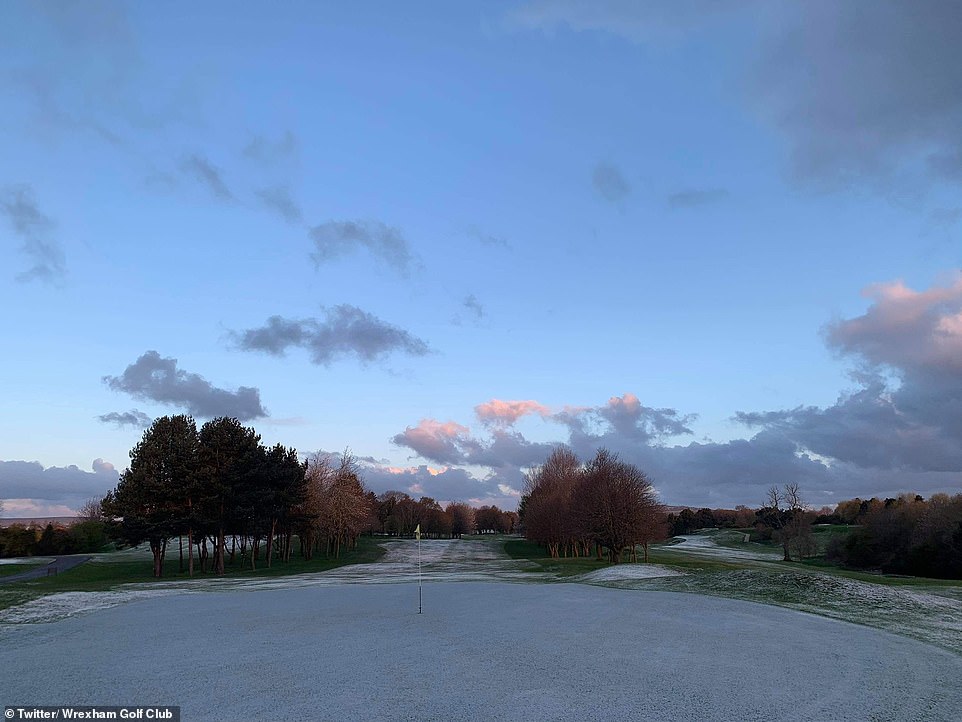 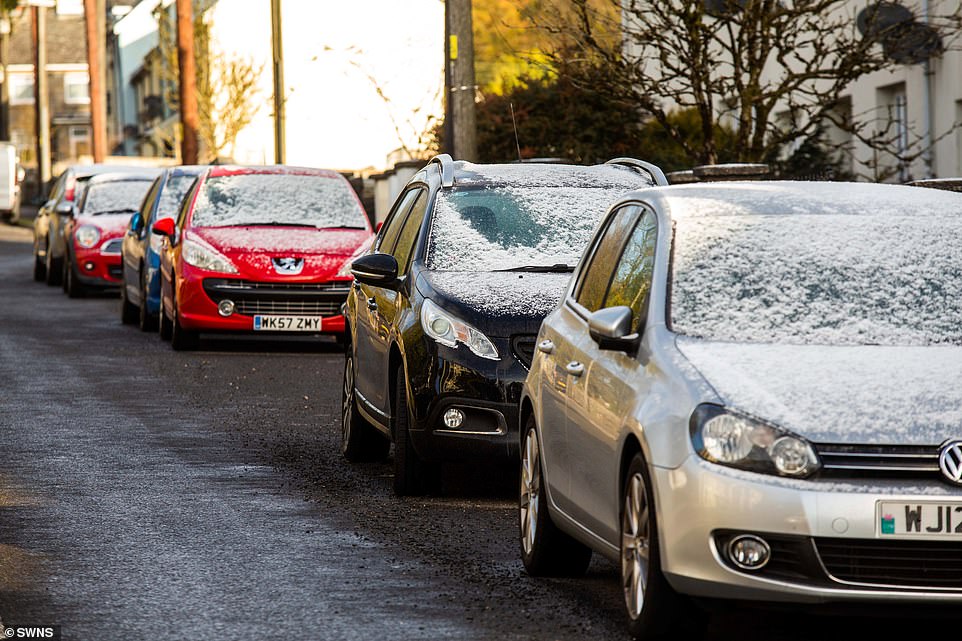 Light snow fell overnight in Princetown, Devon, where it can be seen on car windscreens this morning 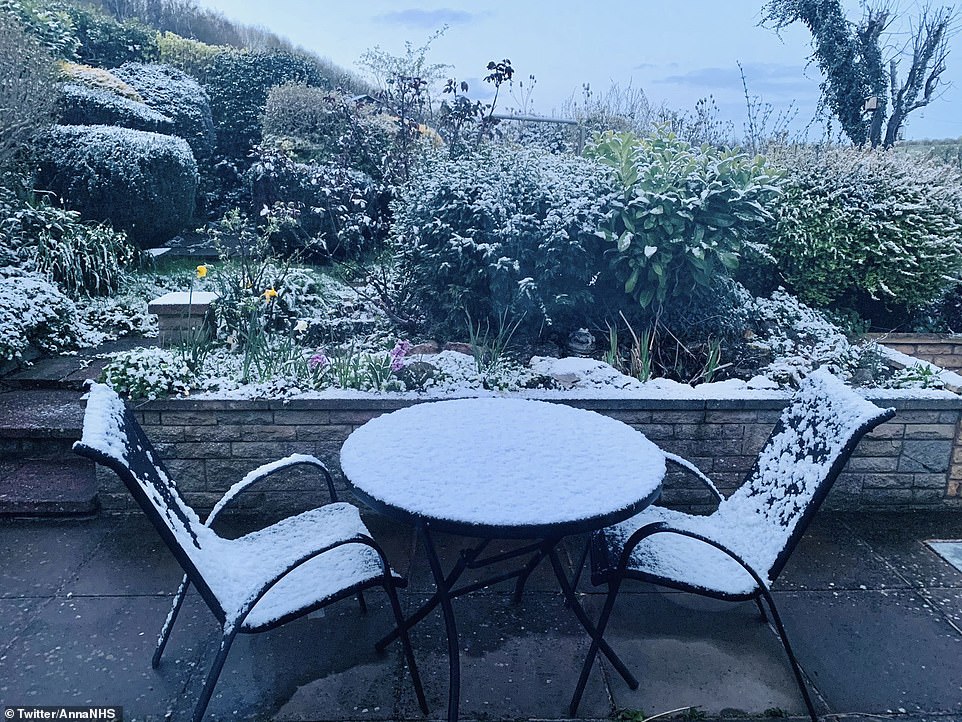 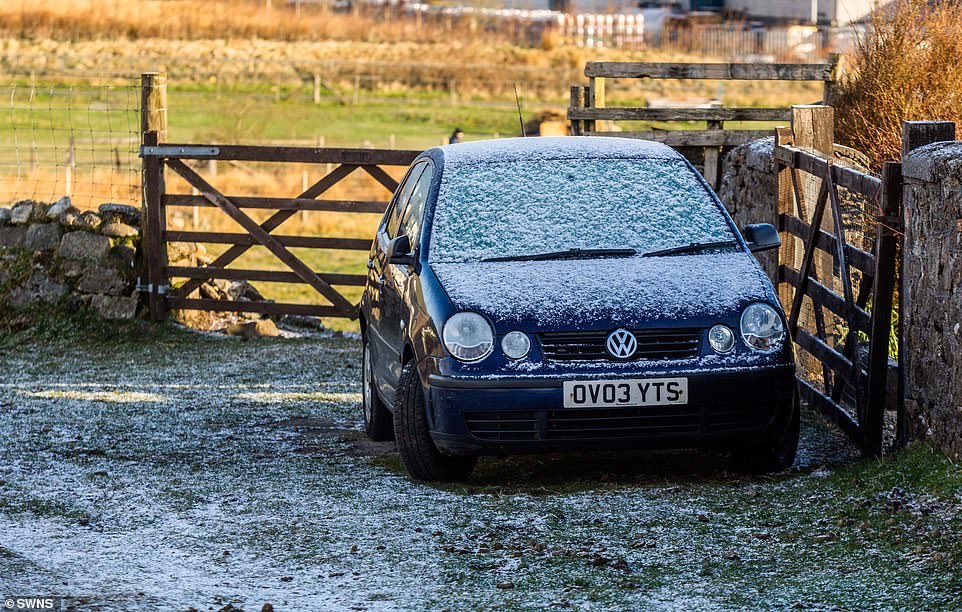 A car windscreen has a light dusting of snow this morning after flurries fell overnight in Princetown, Devon

Tomorrow will be a mostly dry day, with temperatures forecast to be around 8C (46F) to 10C (50F) in the South. 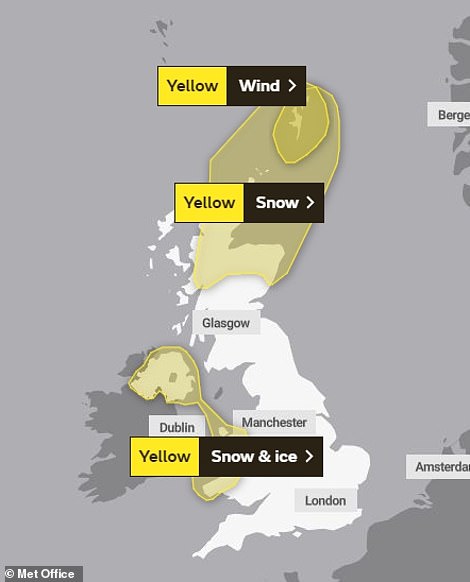 The Met Office has snow warnings in place for this morning

Yesterday, snow, hail and bitterly cold winds made it feel like mid-winter in much of the UK– just 24 hours after families flocked to the beach and packed parks in warm spring sunshine.

Britain’s topsy-turvy weather turned T-shirt conditions on Sunday into a time for warm coats, hats and gloves on the bank holiday.

Some people woke up to frosty scenery after an Arctic weather system moved down from Scotland into England.

Maximum temperatures dropped by up to 11C from a Sunday peak of 17.9C (64F) in Pershore, Worcestershire, to single digits.

Snow early yesterday covered parts of north-east England – especially areas of higher ground in Northumberland and County Durham – and even reached down into London.

However, northern Scotland was by far the hardest-hit. Heavy snowfall caused treacherous road conditions across the region, particularly the Highlands where up to 6in (15cm) fell on high ground.

Meanwhile, fierce wind gusts of up to 75mph were recorded in Shetland and 40mph in England.

Two binmen escaped with minor injuries when their 26-ton lorry was blown over by winds in Leeds yesterday morning. The cab they were in flattened a section of roadside barrier. 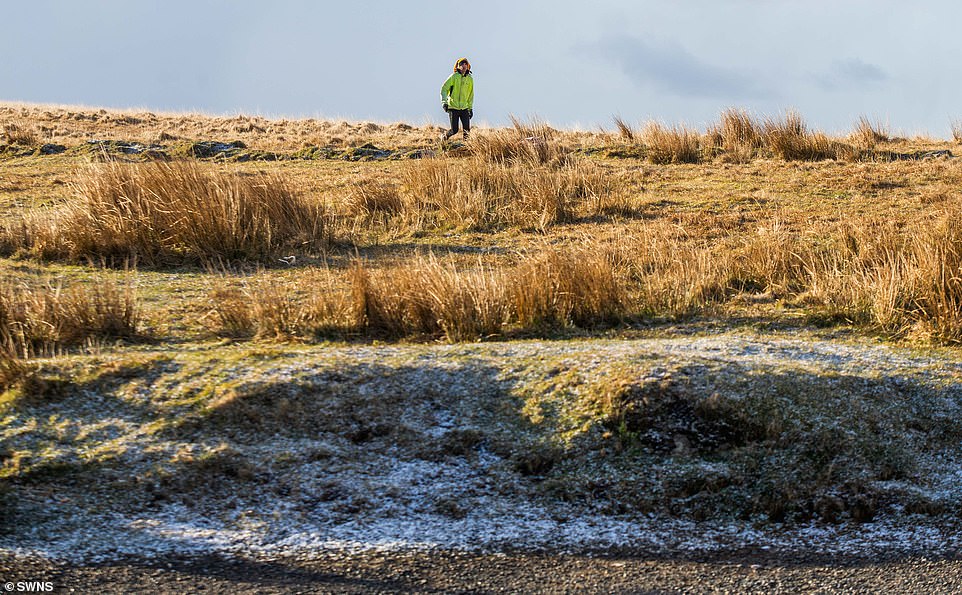 A jogger goes for a run this morning after light snow fell overnight in Princetown, Devon 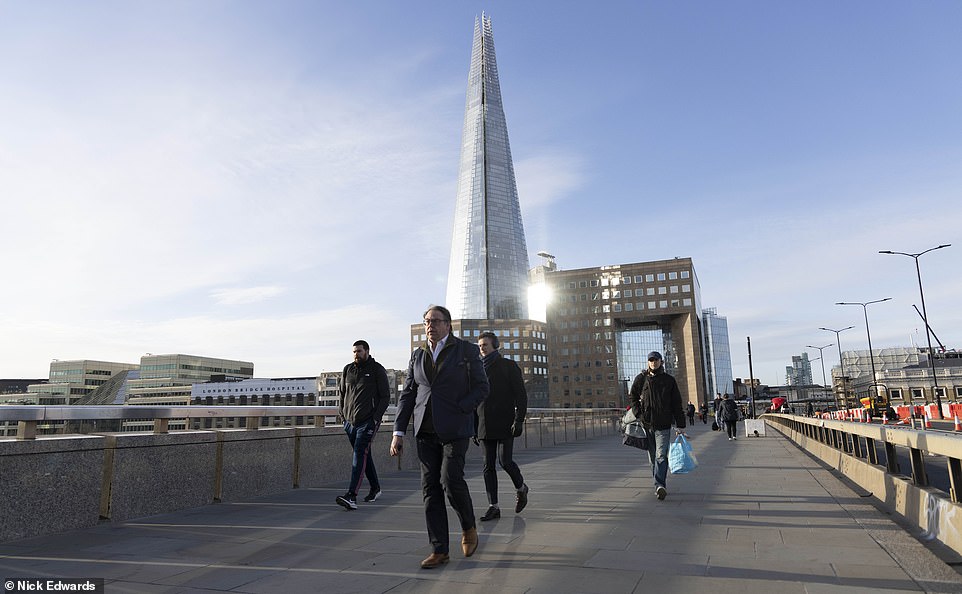 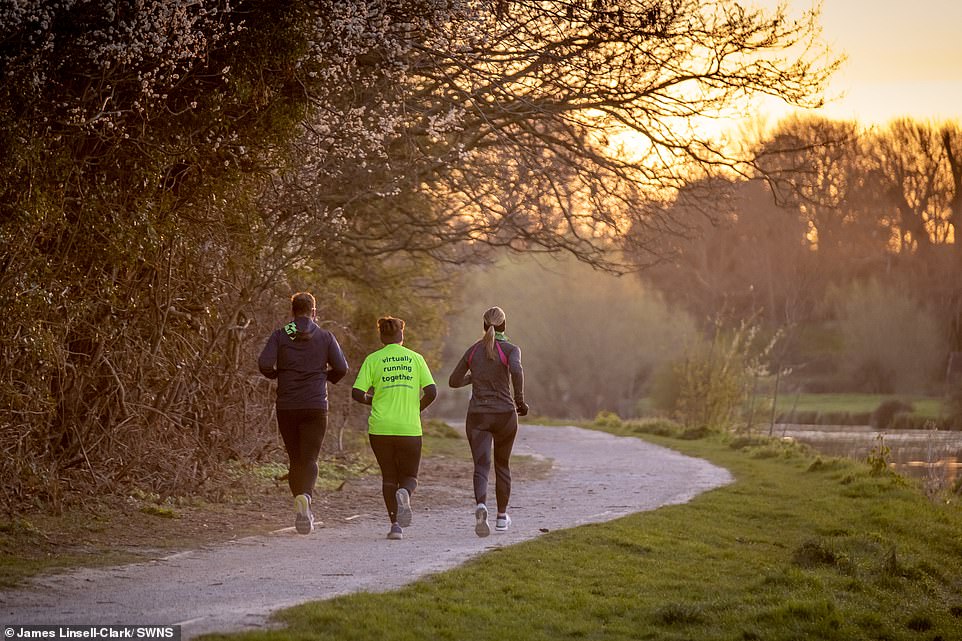 An early morning run on cold but sunny start to the day in Cambridge today, with temperatures staying in single figures 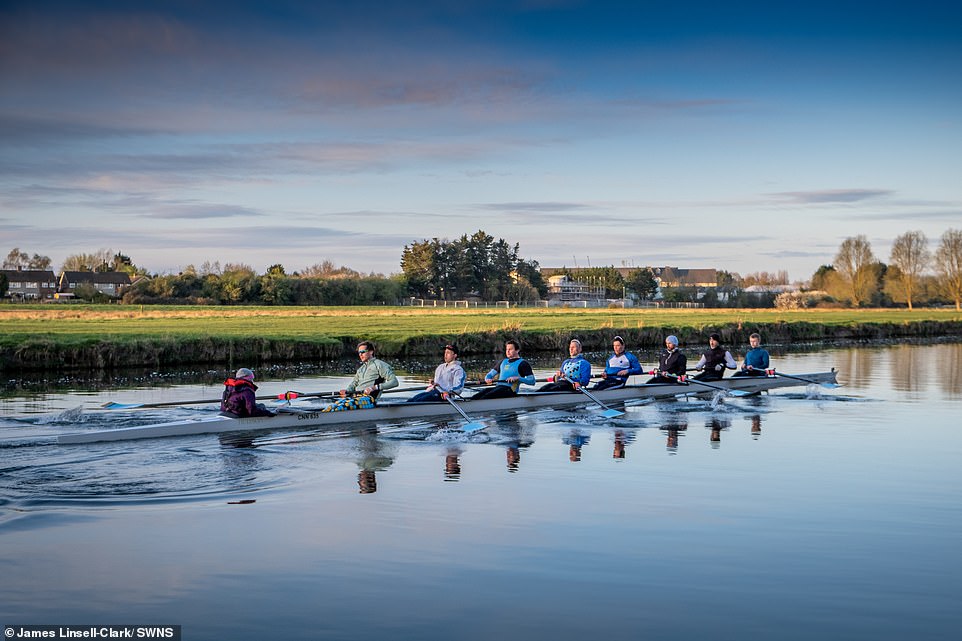 Guy Barter, of the Royal Horticultural Society, warned gardeners not to be in a rush to plant seeds and flowers amid the uncertain weather so far this month.

He said: ‘Overnight frosts in April are dreaded by gardeners.

‘Magnolia and camellia flowers are ruined, fruit blossom and young fruitlets, including pears and apples, are spoiled and the tender tips of potatoes will be burnt off if they appear above ground.’

Mr Barter added: ‘Gardeners’ hearts are in their mouths through April as they anxiously scan the weather forecasts for frost warnings ready to rush out and cover vulnerable plants to ward off damage.’

In Scotland, the country was split in two yesterday as one half of the country shivered in the snow while the other basked in spring sunshine. 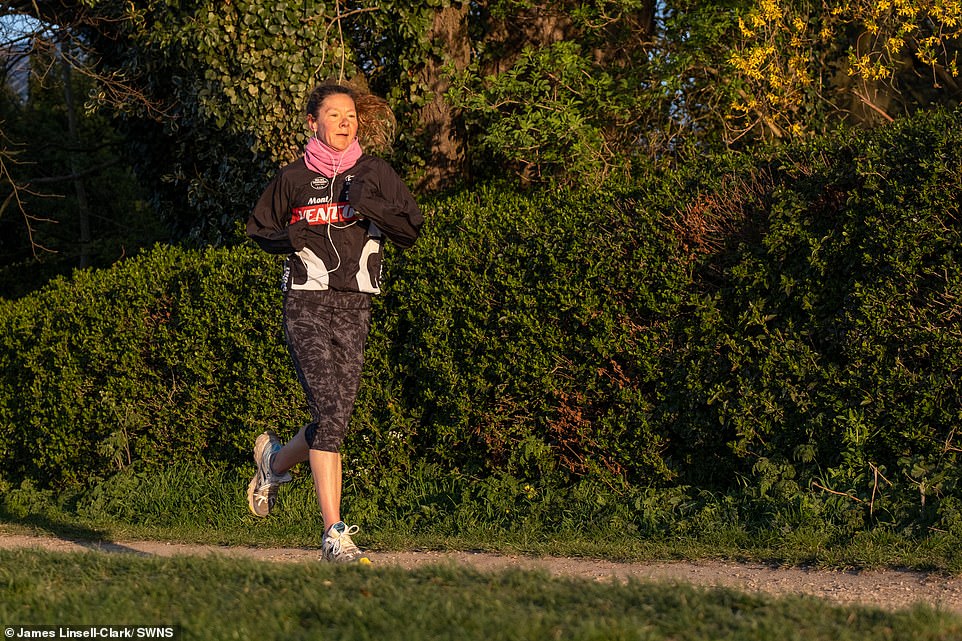 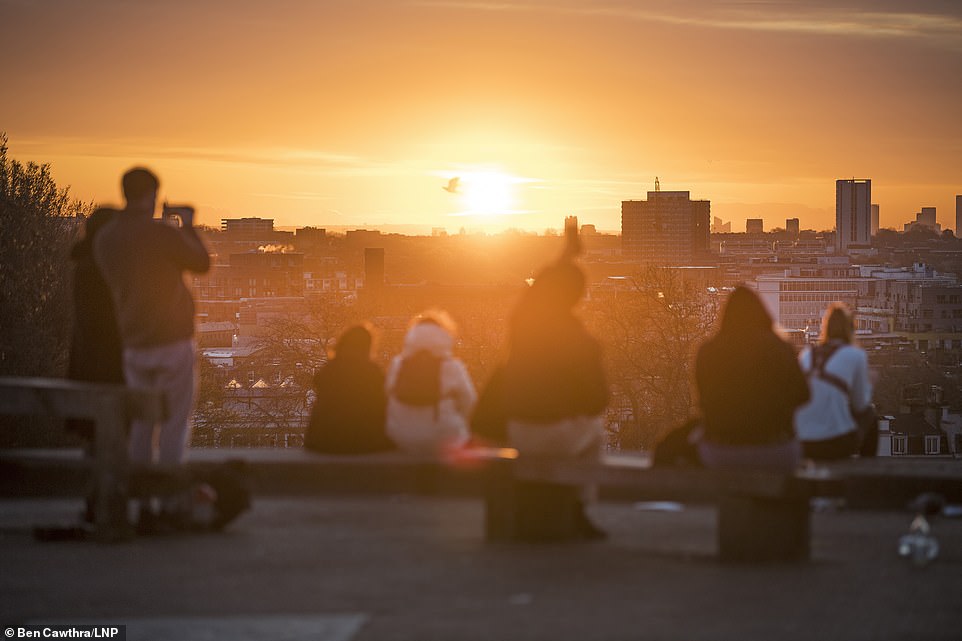 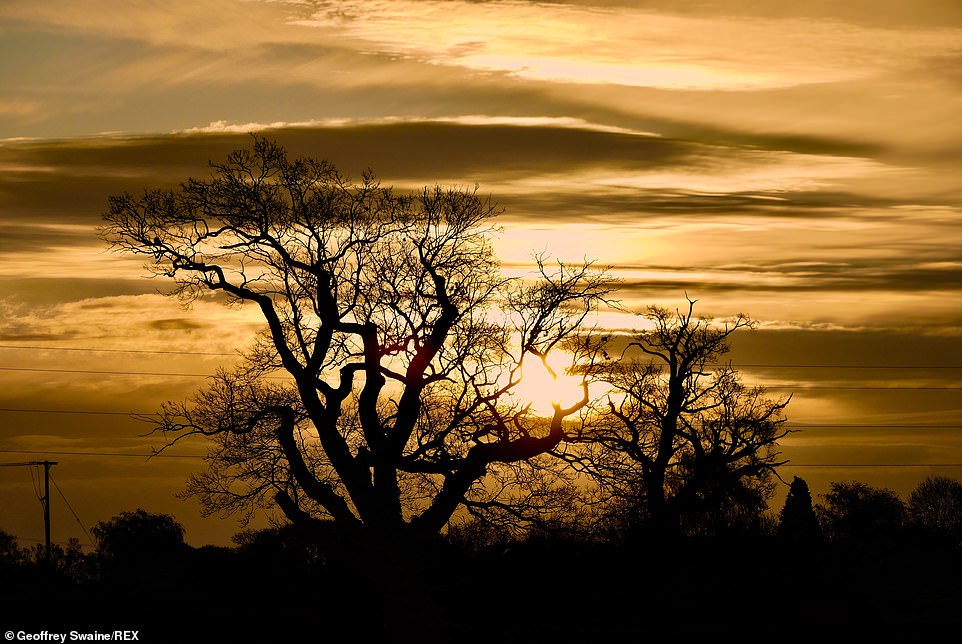 Heavy snow created dangerous driving conditions across Inverness-shire and in Aberdeenshire, where a police car went off the A947 during a white-out near Fyvie.

By JAMES GANT FOR MAILONLINE

The cold snap could bring ‘devastation and soul-destroying loses’ to sheep farmers in the midst of lambing season.

Some farmers keep their sheep in sheds for the lambing season, where they can keep an eye on them and protect them from the weather.

But others prefer them to give birth outdoors from February to April – when most lambs are born.

The snow seen across parts of the UK in the past few days can threaten ewes and lambs with hypothermia and see them die quickly.

Mr Stocker said: ‘Sheep and livestock farmers, especially in the UK’s uplands, are acutely aware of the potential for a spring cold snap which can bring devastation and soul-destroying losses during lambing time.

‘The sector has endured several cold weather events during recent springs and these have wrought considerable hardship to both stock and hill farmers.

‘However, being aware of the approaching change in weather type will allow farmers to buffer the impacts by taking action to avoid the worst losses.’

Yet in the sunny Central Belt, families celebrated the end of a sparkling Easter weekend.

Greg Dewhurst of the Met Office said: ‘You could draw a line from Oban in the West to Dundee in the East. Everything above there has suffered heavy snow showers, while the South has enjoyed prolonged periods of sunshine.’

At Strathpeffer Golf Course in Easter Ross, greenkeeper Donald Krzyzanowski stood in the snow and said: ‘What a difference a day makes. We had a monthly medal played at the weekend and the weather was fantastic.’

The A9 was closed at Latheron in Caithness after a lorry crashed in snow, and the A85 in Argyll was shut between Dunbeg and Connel after a tree fell over the carriageway in strong winds.

Also in Argyll, an experiment began on the landslide-prone A83 at the Rest and Be Thankful to see if the main route can remain open overnight following months of closures.

Sailings between Orkney and Shetland and the mainland were cancelled due to high winds and travellers were warned services today could also be disrupted.

In Shetland yesterday morning, two buses careered off the road in snow near Sandwick. No passengers were on either vehicle, both owned by R Robertson and Son, and neither driver was injured.

Company owner Sonia Robertson said: ‘It shows the ferociousness here of Mother Nature. We have got ridiculously high winds.’

In Aberdeenshire, no one was injured when a police car crashed into a tree on the A947 between Fyvie and Oldmeldrum yesterday morning, and a taxi driver and his passenger escaped unscathed when a large tree crashed onto the vehicle’s roof in Rosemount, Aberdeen in the afternoon.

Meanwhile, in the sunny south, families queued for ice creams at The Boathouse Café in Rouken Glen Park, in Giffnock, East Renfrewshire, where Craig Davison, 32, and Roisain McAteer, 27, took two-year-old Quinn to feed the ducks.

Mr Davison, a construction worker from King’s Park, Glasgow, said: ‘I heard they have snow up north. That’s Scotland for you.’

Aussie bloke who drinks, has a newborn and works night shifts takes on 1,500 calorie a day diet

YFI Price Might Hit $50k Soon With the Launch of v2