Squirrel tucks into CHEESEBURGER near a McDonald’s branch in Florida


This is the moment and unexpected fast food fan was spotted feasting on a  McDonald’s cheeseburger.

The corpulent squirrel was caught on camera by Jamie Walton, 36, as it picnicked on the snack near the golden arches in Venice, Florida.

Video footage shows the squirrel sitting on the grass in a parking lot with the burger, which is almost the same width as the chunky rodent. 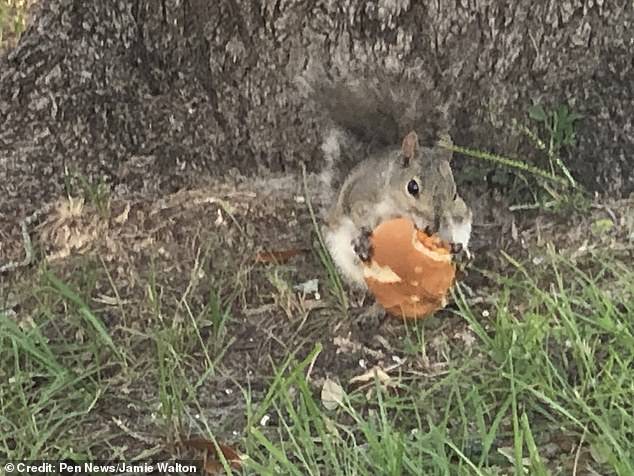 A squirrel was spotted feasting on a McDonald’s cheeseburger near the golden arches in Venice, Florida, video footage shows

Ms Walton said: ‘I pulled into a parking space and it was a few feet from my door. There is a McDonald’s adjacent to the parking lot.

‘I thought it was funny and people have found it amusing.’

She shared her video on Reddit, where it was upvoted thousands of times  and attracted hundreds of comments from surprised viewers.

‘I love the way it’s sat like it’s having a picnic,’ wrote one viewer.

Another said: ‘I think I’ve found my spirit animal.’

Numerous viewers even thought that the portly squirrel was an expectant female, despite the rodents normally delivering their young between March and April, and July and August.

Ms Walton said: ‘There have been many comments saying the squirrel is pregnant. It is not typical for them to give birth this time of year, but I am not an expert.’

Other viewers were baffled to see a squirrel, which is popularly associated with a diet of nuts, acorns and seeds, feasting on the junk food.

The top comment was ‘I didn’t know that squirrels ate meat’.

But the rodents have been known to eat meat when they are faced with hunger, with one squirrel being spotted eating a lizard in south-east Arizona.

Biologist Jeff Nordland, from San Diego, California, captured nauseating footage of the squirrel munching away on a lizard, rather than a nut, on the side of a dirt track.

He believed the hungry creature was a rock squirrel and its meal was a Clark’s spiny lizard, adding that he suspected that the rodent scavenged its snack off the road. 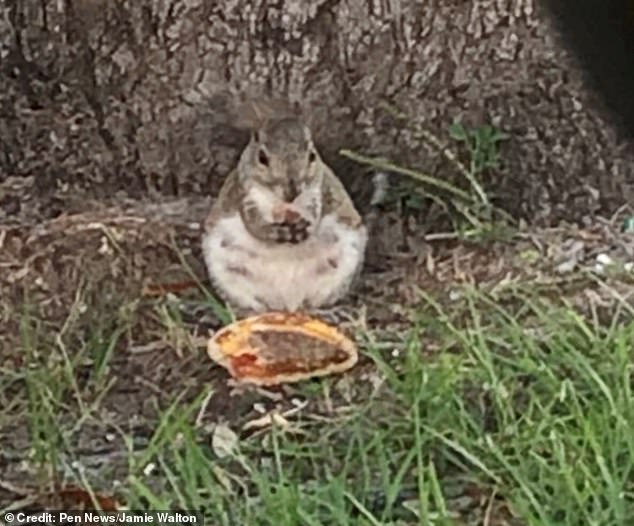 Jamie Walton, 36, filmed the plump rodent, which normally diet on seeds and nuts, casually chomping down its unusual choice of snack

Squirrels have also been known to eat small birds, young snakes and smaller rodents, plus bird eggs and insects.

Ms Walton, who spotted the burger-loving squirrel, was not surprised by the squirrel’s bizarre taste in food, commenting that there are so many rodents in Florida that they ‘eat anything available’.

And it is not the first time that an animal’s surprising fondness for fast food has stunned the public.

In February, a groundhog spent more than an hour casually eating a slice of pizza on a family’s back porch.

Kristin Chalela Bagnell was shocked when she saw the rodent sitting outside her home in Brewerytown, Philadelphia, chewing a large slice of pizza.

After filming the groundhog chomping on its tasty treat, she joked that ‘it’s not just the people that like Philly pizza’.

And only a month later, a lizard met its demise after it had binged on pizza grease in Cocoa Beach, Florida.

The animal was horrifically bloated as it was unable to digest the sand that had got into its food.

Faeces were found to make up 80 per cent of its body mass by the time it was discovered.

Herpetologist Natalie Claunch said: ‘To our knowledge, this represents the largest faeces-to-body-mass ratio recorded in a living animal.’

The bolus-to-body-mass ratio was more than six times greater than the previous record held by a Burmese python.

But the first long-tailed rodent to take social media by storm for its larger than life appetite was Pizza Rat.

In September 2015, New Yorkers were stunned when footage emerged of the rat carrying a  large slice of pizza down the steps of a subway station in Manhattan.

Despite the slice being bigger than it, the rat managed to drag it down several stairs before it was forced to admit defeat.

The video clip of its valiant effort went viral, picking up a staggering 11million views on YouTube.