Sri Lankan authorities say they are bracing for a ‘terrible environmental disaster’ after a cargo ship sank off the country’s pristine western coast following a raging 12-day fire on board.

The Singapore-registered MV X-Press Pearl, carrying 1,486 containers, including 25 tonnes of nitric acid along with other chemicals and cosmetics, was anchored off the port city of Negombo when a fire erupted onboard after an explosion on May 20.

Flaming containers filled with chemicals tumbled into the sea from the ship’s deck as emergency crews sought to contain the blaze over the ensuing two weeks.

The craft, which has nearly 350 tonnes of oil in its fuel tanks, began to sink early on Wednesday and there are fears of a major oil spill.

A salvage crew tried to tow the vessel to deeper water, away from the coast, but the attempt was abandoned after the rear of the ship touched the sea bed.

Environmentalist Ajantha Perera said there was the potential for ‘a terrible environmental disaster’ as hazardous goods, chemicals and oil could be released into the water and destroy marine ecological systems.

Charitha Pattiaratchi, a professor of oceanography at the University of Western Australia, said as many as 3 billion tiny plastic pellets had already been released into the sea and were washing up on beaches. He said the pellets, known as nurdles, ‘will persist in the marine environment forever as they are not biodegradable.’ 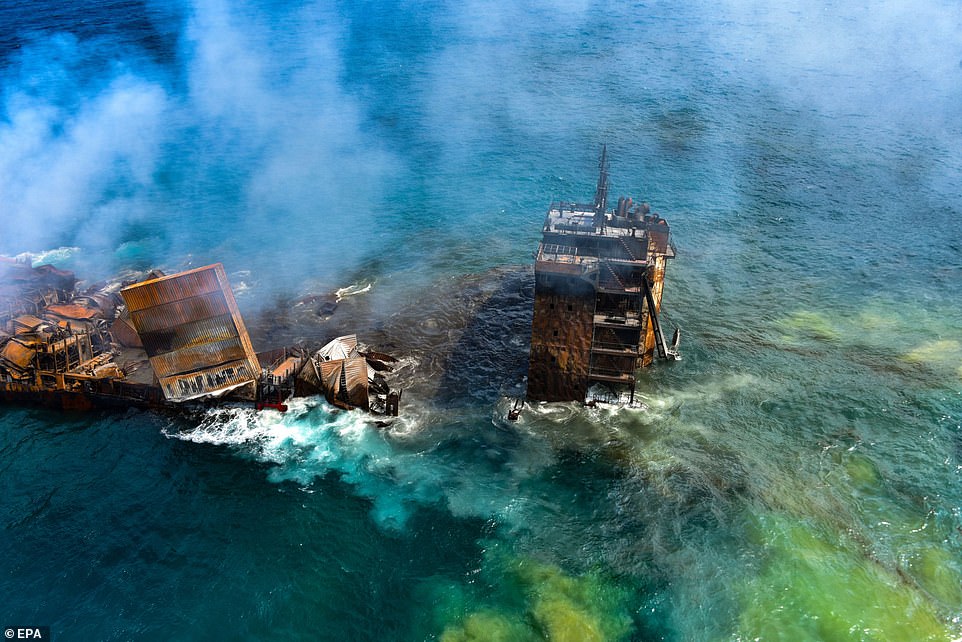 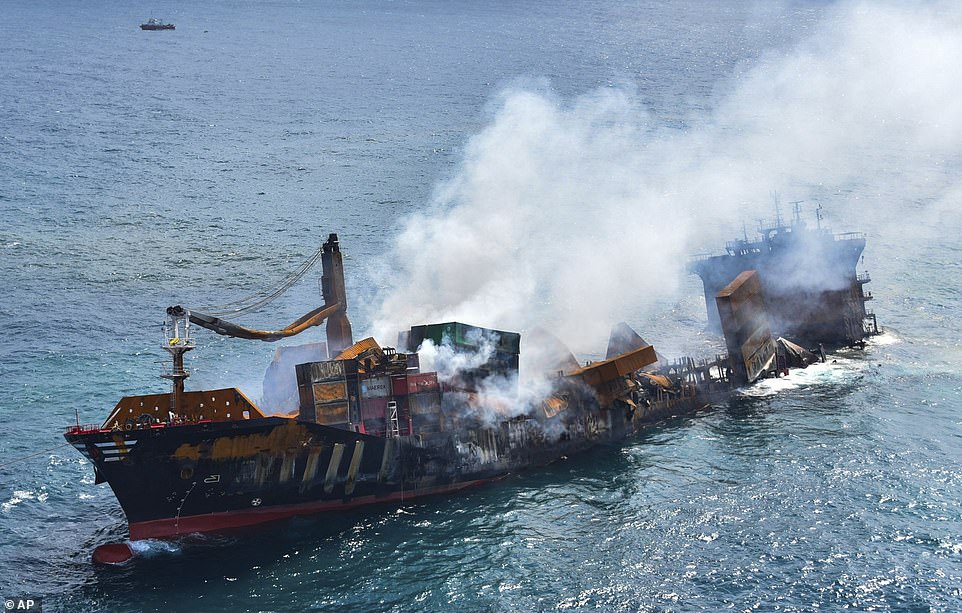 The Singapore-registered MV X-Press Pearl, carrying 1,486 containers, including 25 tonnes of nitric acid along with other chemicals and cosmetics, was anchored off the port city of Negombo when a fire erupted onboard after an explosion on May 20 The ship’s operators, X-Press Feeders, said in a statement on Thursday there were still no signs of a fuel oil spill from the ship, and that much of the toxic cargo had been incinerated in the fire 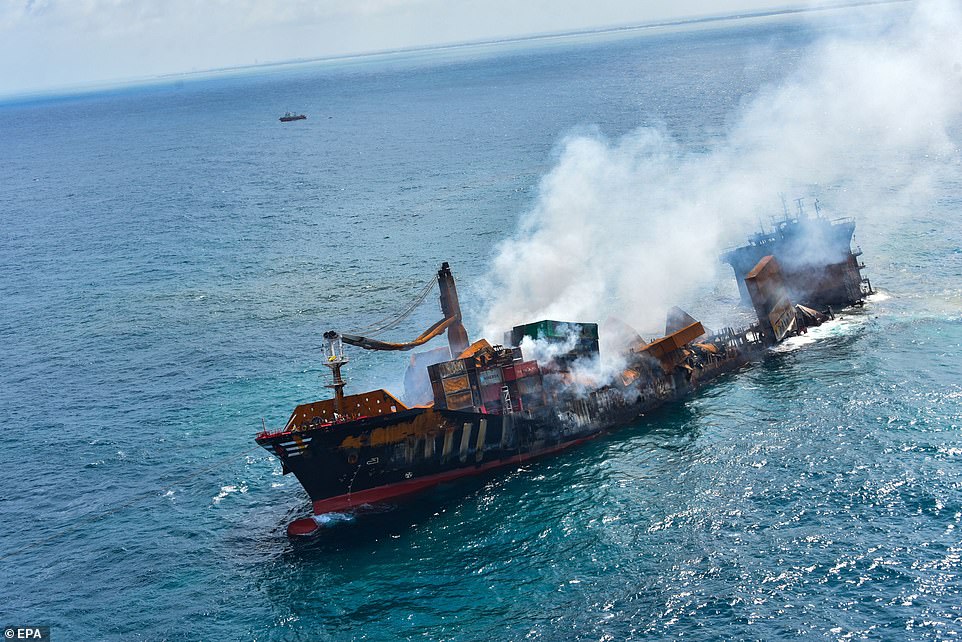 Sri Lanka Navy personnel, wearing protective gear, clear the beach from debris and other materials that washed ashore from the crippled container cargo vessel MV X-Press Pearl, on the beach of Negombo, north-west of Colombo, on Wednesday

Sri Lanka’s private Centre for Environmental Justice (CEJ) said it feared heavy metal pollution in addition to an oil spill from the Singapore-registered vessel, which was carrying 81 containers of ‘dangerous cargo’ including acids and lead ingots.

‘There is a chemical soup in that sea area,’ the CEJ’s executive director Hemantha Withanage told AFP. ‘The damage to the marine ecosystem is incalculable.’

However, he said the silver lining was that 24 hours after the vessel’s engine room submerged there was no visible sign of the oil leaking.

The ship’s operators, X-Press Feeders, said in a statement on Thursday there were still no signs of a fuel oil spill from the ship, and that much of the toxic cargo had been incinerated in the fire.

The statement said: ‘Salvors remain on scene to deal with any possible debris supported by the Sri Lankan Navy and the Indian Coast Guard, who have oil spill response capabilities on standby.’

Navy spokesperson Indika de Silva said: ‘There is no oil leak from the ship yet, but arrangements are in place to deal with a possible spill which is the worst-case scenario.’

But photos from the country’s coast guard showed a layer of green film blanketing the ocean surrounding the vessel. 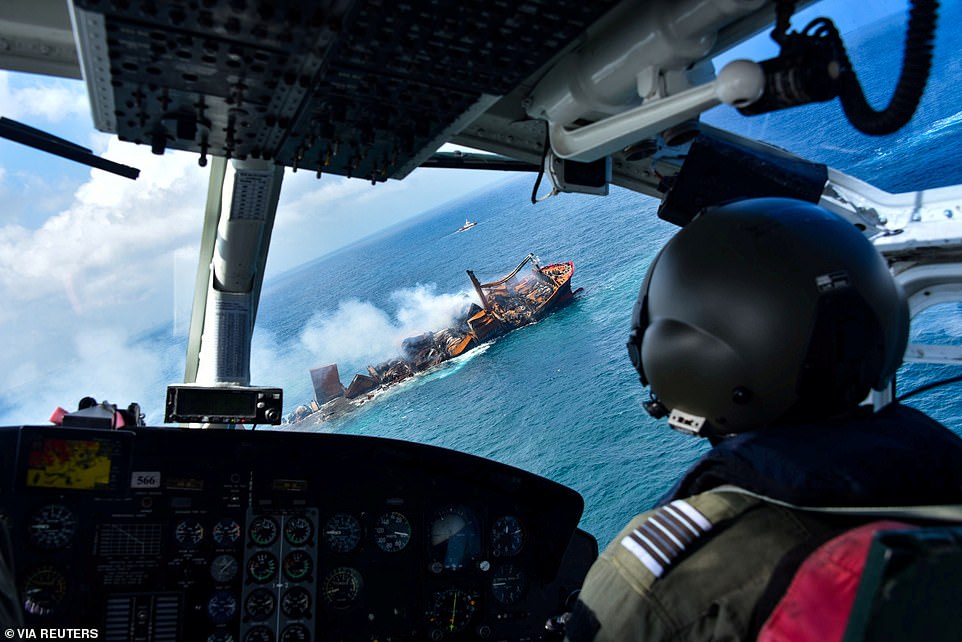 The craft began to sink early on Wednesday and a salvage crew tried to tow the vessel to deeper water, away from the coast, but the attempt was abandoned after the rear of the ship touched the sea bed 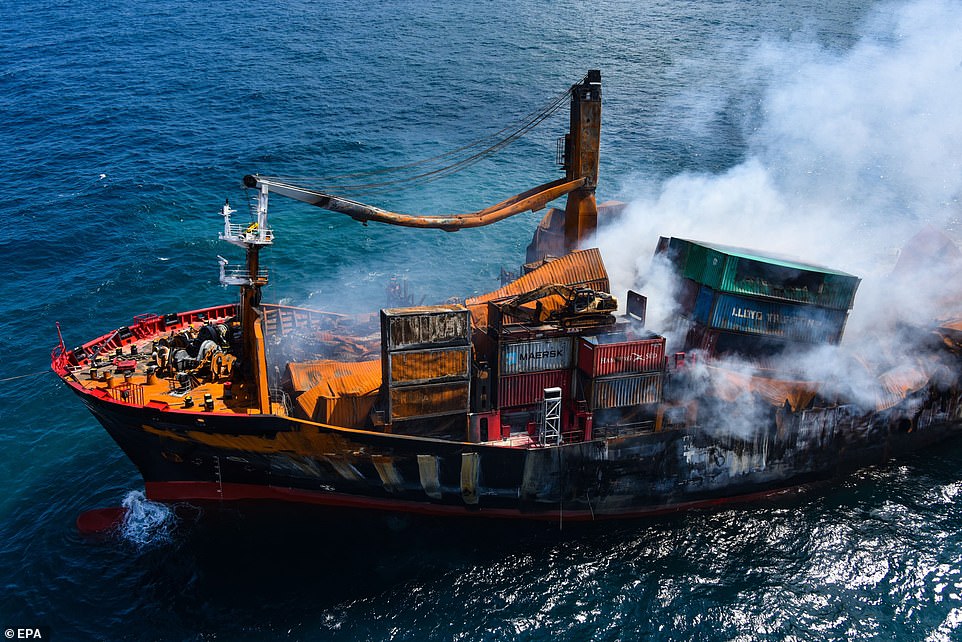 Millions of plastic pellets have already fouled surrounding beaches and fishing grounds, forcing the government to ban fishing along the 80km stretch of coast

The vessel burned for 13 days and millions of plastic pellets have already fouled surrounding beaches, forcing the government to ban fishing along the 50-mile stretch of coast.

The government has said it would seek redress for the incident.

Minister for ports and ports development Rohitha Abeygunewardene told a news conference late on Wednesday: ‘We hope to get compensation in accordance with local and international law. We will never give up on that effort.

‘We will calculate the cost from the beginning of this incident and claim compensation.’

Singapore authorities said on Thursday they have started their own investigation into the incident.

The inundation of microplastic granules from the ship’s containers has already forced a fishing ban and prompted concern for the environment. 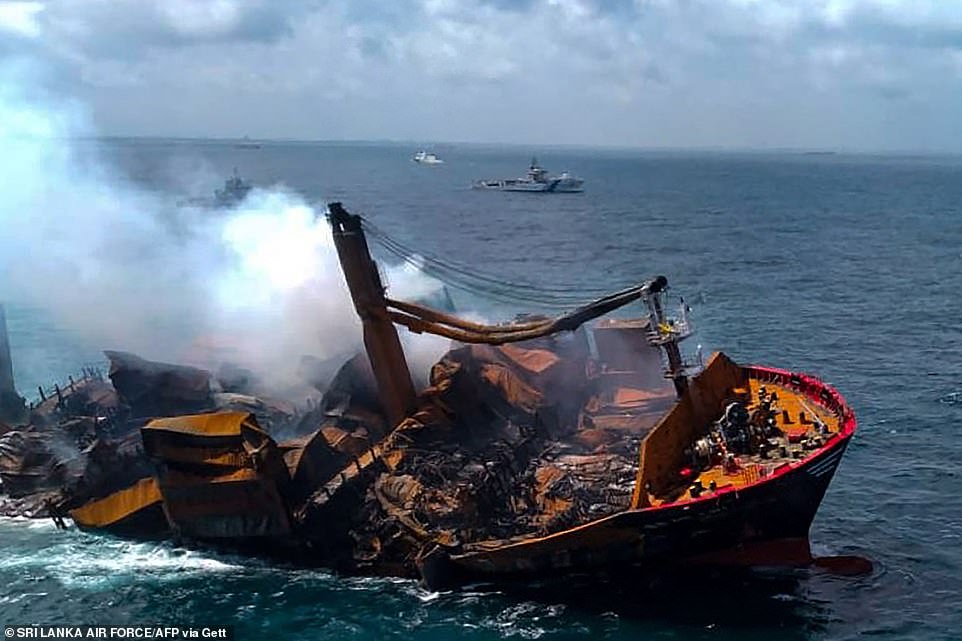 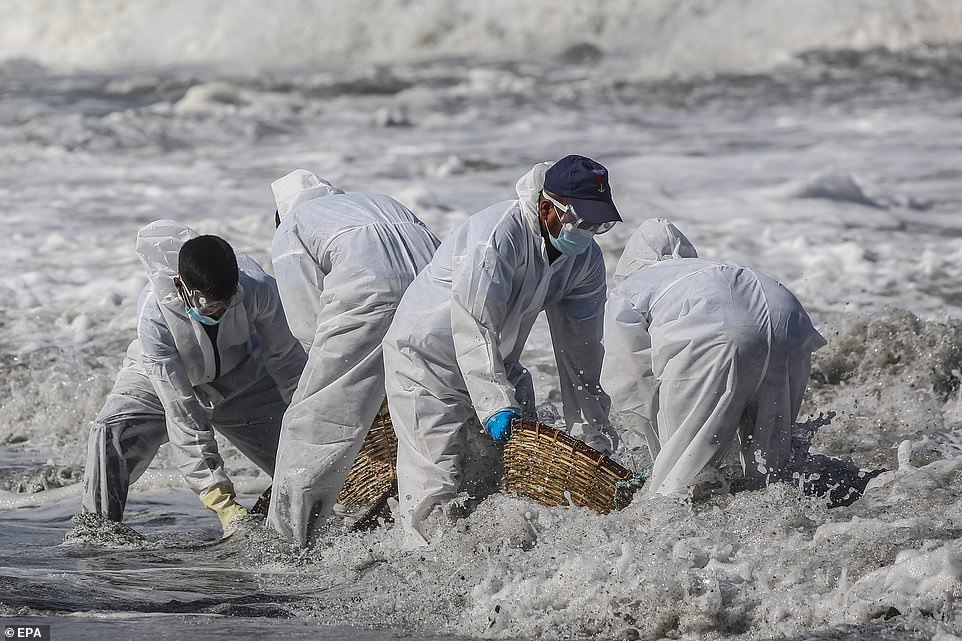 The inundation of microplastic granules from the ship’s containers has already forced a fishing ban and prompted concern for the environment. Pictured a fish washed up on a nearby beach surrounded by plastic granules

‘The ban is affecting 4,300 families in my village,’ said Denzil Fernando, the head of the Sea Street Fisherman’s Association in Negombo.

‘Most people live on one meal a day, how long can we go on like this?’ Fernando told AFP. ‘Either the government must allow us to fish or give us compensation.’

Officials believe the blaze destroyed most of the nearly 1,500 containers on board while some fell overboard.

A cargo manifest showed that in addition to the 81 containers classified as dangerous, it was also carrying a large quantity of lubricant oil.

Authorities believe the fire was caused by a nitric acid leak which the crew apparently knew about from May 11, nine days before the blaze started.

Sri Lanka’s President Gotabaya Rajapaksa asked Australia on Monday to help evaluate the ecological damage to the island, one of the most bio-diverse countries in South Asia.

Police said three officers from the ship – two Russians and an Indian – had been questioned and their passports impounded.

The ship was heading to Colombo from India when the blaze started.

The 25-strong crew was evacuated last week. Two of them suffered minor injuries.

A cargo ship is sinking off Sri Lanka’s main port of Colombo after a 13-day fire that already caused the island’s worst marine environmental damage.

The Indian Ocean nation is now battling to avert a possible oil leak that would compound the pollution caused by tonnes of plastic that have swamped beaches.

How big is the ship?

The Singapore-registered MV X-Press Pearl is almost brand new, made in China and commissioned in February.

Its overall length is 610 feet, about the size of one and a half football pitches. The height is about 150 feet and width is 112 feet.

The ship was heading to Colombo from Gujarat in India when the blaze started, having previously visited Qatar and Dubai.

What was in its cargo?

There were 1,486 containers on board. Out of that, 81 containers were classified as holding ‘dangerous cargo’.

There were 25 tonnes of nitric acid, 28 containers of plastic pellets as well as a container listed as ‘environmentally hazardous substance liquid’.

A large quantity of lubricants, food, cosmetics, lead ingots and a few vehicles were also on board.

How did the fire start?

Sri Lanka’s Environmental Protection Authority suspects it was triggered by a nitric acid leak that had started on May 11 before the vessel entered Sri Lankan waters.

Ports in Qatar and India had refused to offload the leaking nitric acid and the vessel arrived in Sri Lanka with the leak.

The first fire reported on May 20 was put out by the vessel’s crew using its own firefighting equipment, but two hours later the ship issued an appeal for help from Sri Lanka’s port authority.

How was the fire put out?

Tugs from the Colombo port and the Sri Lanka navy attempted to douse the flames but strong monsoon winds spread the fire and made the operation difficult.

Using water to douse the chemical fire may have also fanned the flames.

Help was then sought from India’s coastguard on May 25 and the Dutch salvage firm SMIT was also called in by the owners of the vessel.

Finally, the fire was declared extinguished on June 1 after much of the cargo was incinerated.

What is the ecological damage?

Sri Lanka is yet to estimate the impact and has asked Australia to help prepare an assessment.

However, tonnes of plastic pellets carried on the vessel have already swamped a coastal stretch of over 50 miles along Sri Lanka’s western seaboard, prompting a ban on fishing.

On some beaches, piles of pellets – the raw material to make packaging and other plastic goods – were two feet deep.

They are not biodegradable and can remain for decades in the environment. They can also cause problems for marine wildlife like fish and turtles if ingested.

The Marine Environment Protection Authority (MEPA) is working to salvage the ship and ensure that its bunker oil – 297 tonnes of heavy fuel and 51 tonnes of marine fuel oil – do not leak into the Indian Ocean.

Although this is relatively little – the 1989 Exxon Valdez disaster saw some 35,000 tonnes of crude oil spilled – a leak could still cause major environmental degradation.

An Indian coast guard vessel already in the area has equipment to deal with an oil slick before it could reach beaches, according to the Sri Lankan navy, which has requested additional assistance.

Sri Lanka may try and refloat the vessel and move it into deeper water.

International shipping expert and lawyer Dan Gunasekera said that divers could be used to pump out the bunker oil safely.

‘We can assume that since the ship is only three months old, it had good systems to ensure there is no leak from fuel tanks in an eventuality like this,’ Gunasekera told AFP.

What happened to the crew?

The 25-member crew are safe with only two injured while evacuating the ship on May 25. They are undergoing coronavirus quarantine in Colombo.

The Russian captain and the chief engineer have been questioned for 14 hours by criminal investigators probing the fire and the environmental damage.

A third officer, an Indian national, has also been grilled and all three are banned from leaving the island pending further investigations.

COVID and communication: Lip-readers struggling behind the mask

Bindi Irwin has announced that she is taking a break from public life, after she shared...

Brianna McNeal finishes second in 100-meter hurdles. Will she be cleared to race in Olympics?