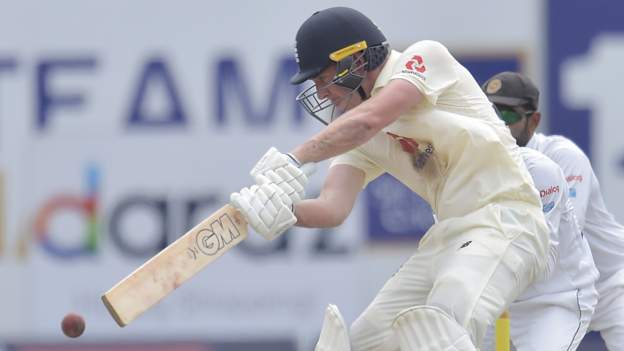 England wrapped up a seven-wicket victory over Sri Lanka in the first Test of a two-match series in Galle.

Resuming on 38-3, needing another 36 for victory, Jonny Bairstow and debutant Dan Lawrence carried England to their target inside 35 minutes on the final morning of an enthralling encounter.

Bairstow ended unbeaten on 35 and Lawrence 21, although the latter survived an lbw review against Dilruwan Perera and Sri Lanka did not refer another shout that replays suggested would have been overturned.

After England slipped to 14-3 during a frantic end to day four, Bairstow and Lawrence’s unbroken 62-run stand guided them to an ultimately comfortable win.

The second Test starts at 04:30 GMT on Friday at the same ground.

England are now unbeaten in nine Tests, have won four consecutive overseas Tests for the first time since 1957, and boast five successive wins in Sri Lanka.

Victory improved England’s chances of reaching the inaugural World Test Championship final at Lord’s in June. They remain fourth in the standings, with the two top sides playing in the final.

England out of the blocks quickly

Joe Root’s side have been slow starters in series in recent years – they lost the opening Test against Australia, New Zealand and South Africa in 2019, and against West Indies last summer.

However, Sunday’s top-order wobble aside, they were rarely troubled in the first of six successive Tests on the subcontinent – an achievement made all the more impressive given they had one day of match practice before this game.

Captain Root scored a magnificent 226 in the first innings, and off-spinner Dom Bess and slow left-armer Jack Leach, who returned match figures of 8-130 and 6-177 respectively, found more rhythm as the game progressed, which bodes well for the sterner four-Test series in India that follows this tour.

Lawrence can take considerable credit for his first-innings 73 and the manner in which he helped negate England’s second-innings nerves alongside the efficient Bairstow, while wicketkeeper Jos Buttler was tidy behind the stumps throughout on a dry, turning pitch.

Sri Lanka, meanwhile, were left wondering what if. Their collapse to 135 all out on the first day was described as “one of the worse we’ve ever seen”, and even an extra 50 runs could have changed the course of this game.

England captain and player of the match Joe Root: “To come here with the little preparation we have had and play in the manner we have is very impressive.

“We worked extremely hard and for the spinners to come out of the game with two five-fors is a great effort. Without the preparation, it is testament to their characters.

“It is a good start to the tour. We know we have to keep getting better but I am really pleased with the start we have had.”

Sri Lanka captain Dinesh Chandimal: “We were outplayed in first innings with bat and ball. As a batting unit, especially playing at home, you have to get a big total in the first innings. It cost us the game.

Former England captain Michael Vaughan on BBC Test Match Special: “It has been a really interesting Test. Sri Lanka were so bad on days one and two but have come back.

“When I think about the preparation England have had, in Loughborough in a tent, one day in the middle in Sri Lanka and then rain, to put in this kind of performance is a great effort.

“This is not a great Sri Lanka team but it is always special when you win the subcontinent.”

Score updates, how to watch Tua

The coronavirus revealed: Computer images show the spiked cell that has killed millions

Poll … the majority of Americans want to impeach Trump immediately