Governor General’s staff to be asked to do woke ‘privilege walk’ so they can identify how entitled they are while being asked bizarre questions like ‘were your parents ever addicted to drugs?’

Staff in the Australian Governor General’s office may be asked to discuss their race, religion, appearance and drug during a ‘privilege walk’.

The bureaucrats have been signed up to do bizarre activity which may require them to identify how privileged they are, but it has been criticised by previous participants as being too personal.

The exercise will require staff to step forward or backwards depending on their answers to prompts such as whether their parents have been arrested or addicted to drugs.

The training is run by Charles Sturt University (CSU), with over 330 staff at the Australian institute completing the exercise in 2019 and offering mixed feedback, reported The Daily Telegraph. 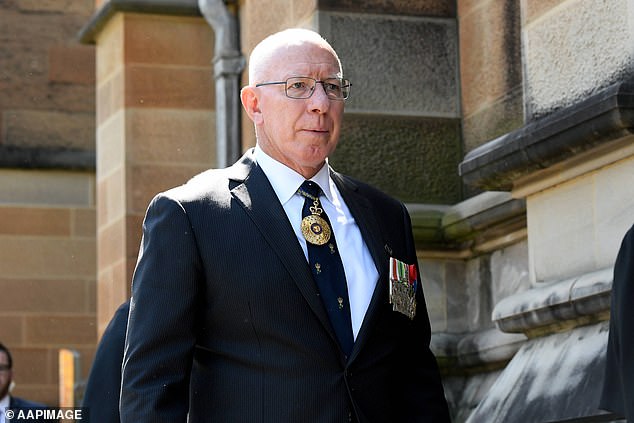 Staff in the Australian Governor’s General office may be asked to discuss their race, religion, appearance and drug during a ‘privilege walk’. Pictured: Governor-General David Hurley 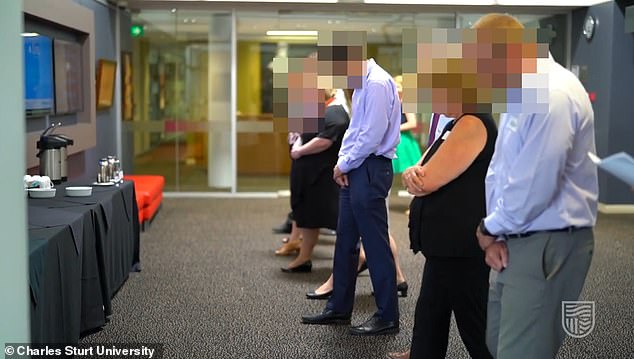 The exercise will require staff to step forward or backwards depending on their answers to prompts such as whether their parents have been arrested. Pictured: CSU staff doing privilege walk in a video on its website

One participant remarked ‘facilitators need to acknowledge some people may find the issues raised in the privilege walk (and open disclosure) too personal’.

Another said ‘I think the walk of privilege needs more work – questions should be contextualised a little more’.

Some staff members described it as ‘confronting but valuable’, ‘very effective’, and ‘interesting and revealing’.

In variations of the activity, attendees have been asked whether parents told them they were ‘beautiful, smart, or successful’, if they feel comfortable with others knowing their sexuality or if they worry about crime or drugs in their neighbourhood.

Questions around family may include whether parents have been incarcerated, been addicted to drugs or alcohol or are still married.

The exercise was developed from a 1998 essay by academic Peggy McIntosh titled ‘White Privilege: Unpacking the Invisible Knapsack’.

The article used a backpack full of tools and maps as a metaphor for the advantages Ms McIntosh said white people have over others. 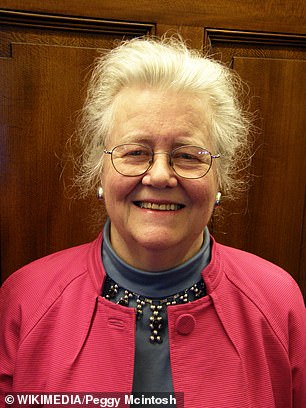 The exercise was developed from a 1998 essay by academic Peggy McIntosh titled ‘White Privilege: Unpacking the Invisible Knapsack’

Some critics say the exercise is too simplistic and can make some people feel forced to disclose deeply personal information.

Commenting on one video showing high school students doing the walk, she said ‘there is body language in the video that suggests that the students are embarrassed to be separated out from their peers in this way’.

Psychologist Michael Mascolo wrote in Psychology Today that the activity can backfire and make people at the front of the ‘privilege line’ feel defensive.

He said while some people ‘experience an enhanced awareness and appreciation of how they have been advantaged’ others are offended and feel ‘personally blamed’.

The exercise is one component of unconscious bias and inclusivity training run by CSU.

CSU’s report into the training said eleven participants found it the most valuable exercise.

The report said it helped people ‘recognize how power and privilege can affect individual lives even when they may not be aware it is happening’.

A spokesperson from the Office of the Official Secretary to the Governor-General told The Daily Telegraph the ‘training is not mandatory.’