Stars inspired by their looks from Hollywood icons in the “2021 Met Gala” .. Who is the sweetest?


Many celebrities attended the “Meet Gala” fashion party, which was held the day before yesterday in America, after it was canceled last year due to the spread of the new Corona virus around the world, and some famous women were inspired by their appearance at the ceremony from the beauties of Hollywood, and these are reviewed in this report, according to the website.insider“.

Celebrities inspired by Hollywood beauties at the 2021 Met Gala

The actress, Taraji B. Henson, wore a shiny jumpsuit inspired by the clothes of the singer, Diana Ross in the seventies of the last century, referring to Ross, as she told the newspapers, where she stressed that she had dreamed since her childhood to be as creative as her.

Taraji B. Henson and Diana

Jeremy Scott designed the black jumpsuit that Henson wore to the party, and it was covered with silver embellishments, the neckline, and geometric cutouts in the chest area, and she complemented her looks with shoes from Stuart Weitzman.

Singer Billie Eilish was inspired by the late actress Marilyn Monroe for her Met Gala look, as she wore an off-the-shoulder 15-foot Oscar de la Renta dress, with a neckline similar to the dress that Marilyn Monroe wore at the 1951 Academy Awards. And also Eilish’s short blonde hair styling is similar to Monroe’s.

Ilyesh Kiki confirmed that her look was inspired by a Barbie doll, but her dress was from Marilyn Monroe and Grace Kelly, according to the “New York Times.” She also indicated that she brought pictures of Monroe and Kelly’s dresses in her meetings with the Oscar de la Renta team while designing the dress.

Actress Yara Shahidi’s dress was inspired by actress Josephine Baker, as she wore a strapless dress from Christian Dior that resembled the dress worn by activist and artist Josephine Baker while she sang at a party held in 1951. Shahidi’s dress was covered with intricate beads from head to toe, with a thin belt around Waist with coordinating gloves.

Supermodel Anouk Yai also inspired her dress by the late Josephine Baker, as it resembled a dress she appeared in in 1928, which was designed with a low neckline and was complemented by a polished snake feather, and embroidered with silver flowers and moons throughout the dress, which was from Oscar de la Renta “.

Actress Gabrielle Union wore a dress inspired by the late actress, Cecily Tyson, designed by Iris van Herpen “, It is similar to the dress that the late woman wore at the 1974 Emmys but earlier, she also wore a black dress from Samantha Designed specifically to honor Cicely TysonAnd she wrote on her Instagram page: “Salute to an American icon.” 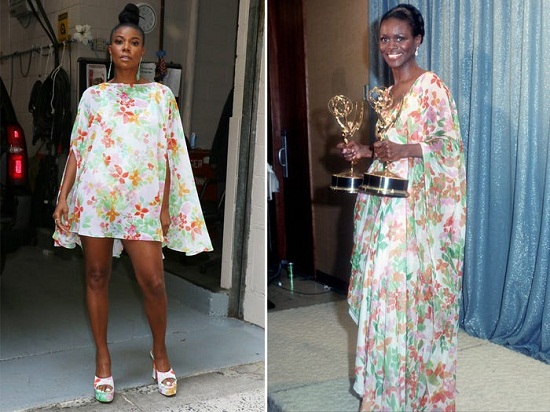 Champions League .. Suarez leads Atletico Madrid against Porto and Griezmann as a substitute

Champions League .. Suarez leads Atletico Madrid against Porto and Griezmann as a substitute