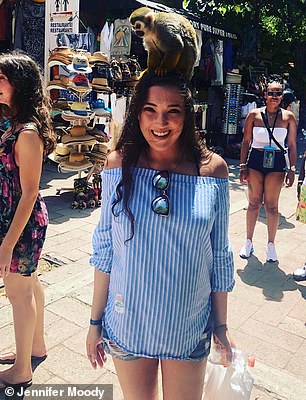 Startup founder Jennifer Moody spoke out to DailyMail.com about how her dreams were dashed in an alleged scam

A startup founder who is suing Shark Tank stars Kevin O’Leary and Kevin Harrington has spoken out, after accusing them in the suit of endorsing a scheme to rip off fledgling businesses.

The lawsuit filed on Wednesday in Los Angeles accused Harrington and O’Leary of fraud and negligence for their alleged endorsement of InventureX and Ideazon, companies that promised to market and launch crowdfunding campaigns for startups. Both men deny the claims against them.

The founder of lead plaintiff Bucket Social, 29-year-old Jennifer Moody, said in an interview with DailyMail.com that her life savings of $6,000 — including cash gifts from her recent wedding — were wiped out in a deal with InventureX.

Moody, like the other 19 plaintiffs in the suit, said she decided to work with the company after seeing videos of Harrington and O’Leary endorsing that firm or Ideazon.

In reality, the suit alleges, the two companies were ‘intertwined’ entities staffed by fictitious employees, whose photos on the companies’ websites were actually stock images. The lawsuit claims the companies took fees but never delivered the promised crowdfunding launches.

‘I was devastated,’ Moody said. ‘I felt this was my one chance to get my company going, and I felt humiliated and a failure when no campaign happened.’

Harrington and O’Leary have slammed the allegations against them as false, with both men saying that they had no involvement in the fraud, claiming their names and likenesses had been used without permission. 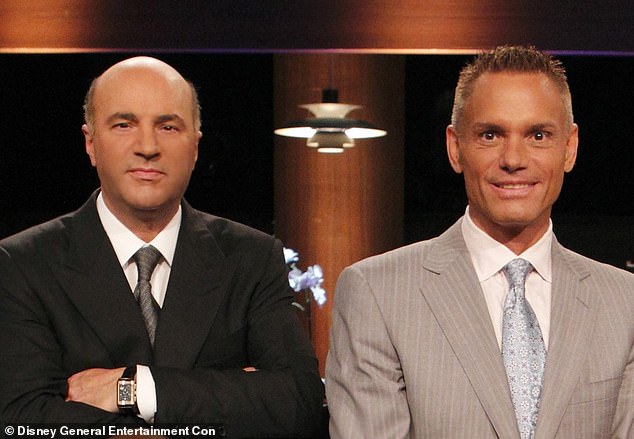 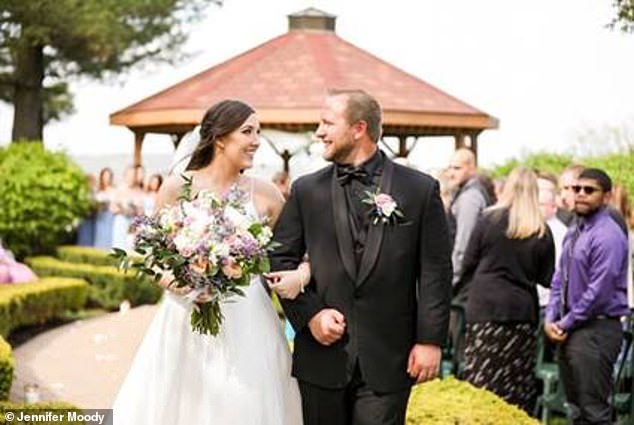 Moody, said in an interview with DailyMail.com that her life savings of $6,000 — including cash gifts from her 2019 wedding (seen above) — were wiped out in a deal with InventureX

O’Leary, a Montreal native, has been seen on the ABC series Shark Tank since 2009, while Harrington, a Cincinnati native, was seen on the series in its first two seasons.

The suit claims O’Leary ‘endorsed the primary executives of both companies in the scam’ including ‘referring to them by name’, and claims that Harrington is a ‘partner and primary executive’ of InventureX.

An attorney for Harrington, Steve Mandell, slammed the allegations against him as false in a statement to DailyMail.com, saying that his client had no involvement with InventureX other than making a video for them, and that he had been ‘taken advantage of’ by the alleged fraudsters.

‘Kevin never had any business arrangement or contract with any of the Plaintiffs. This should be a dispute between the Plaintiffs and InventureX,’ Mandell said.

‘Kevin simply did a video for this Company. Kevin has never owned any piece of the Company nor served any executive role within the Company,’ he added.

The attorney said that Harrington was ‘disturbed by the accusations and has been taken advantage of as a businessman’ and intends to ‘defend the allegations contained in this complaint vigorously.’

O’Leary told DailyMail.com in a statement: ‘It appears that someone has been using my name and likeness without my knowledge, permission, or consent.’

‘I’ve never heard of any of these purported companies and have never conducted business with any of the plaintiffs who filed this suit,’ the star added.

‘Obviously, I want to get to the bottom of it too, as my rights have been violated. We will makes sure that the bad actors are held accountable,’ O’Leary said.

Just hours after the suit was filed, the websites of both InventureX and Ideazon announced that the companies had shut down, with one citing ‘the economic slowdown’. The companies could not be reached for comment. 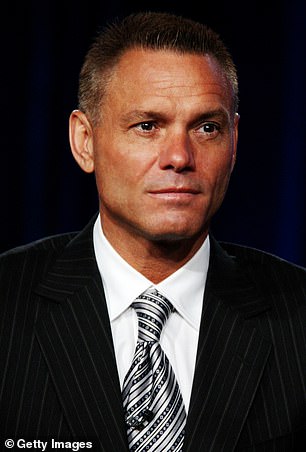 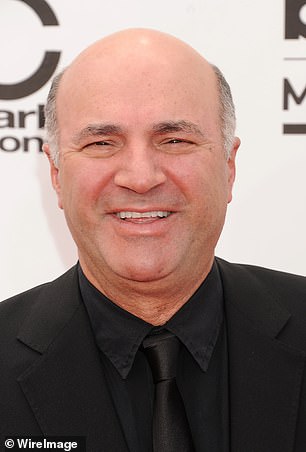 Harrington (left) slammed the allegations as false through his attorney, saying he had never partnered with InventureX, merely made a video for them. O’Leary (right) did not immediately respond to a request for comment

Hours after the suit was filed, InventureX announced that it was shutting down 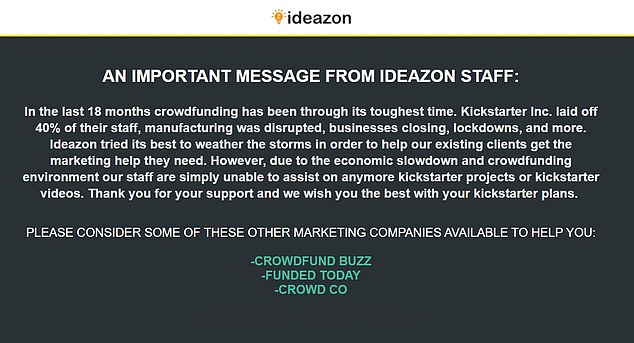 Ideazon made a similar announcement, blaming the ‘economic slowdown’

The new lawsuit was filed by 20 frustrated startup founders who collectively lost some $400,000 in the alleged scam, and lead attorney for the defendants Tre Lovell said that there could be hundreds of more potential victims.

The suit accuses O’Leary of negligently endorsing the fictitious executives of InventureX and Ideazon with video messages.

‘Everybody has virtually the same story, they were kind of lured in to work with these companies based on the the purported involvement of Harrington and endorsement of O’Leary,’ said Lovell, a Los Angeles attorney.

‘They paid their money, and were excited to get their campaigns launched, and out of 20 clients zero campaigns were launched,’ he said.

‘These are upstart entrepreneurs — they’re not wealthy, and some put their last dollars into these campaigns and these dreams, and that is the real egregious and disgusting aspect of what happened here,’ added Lovell.

Ideazon and InventureX ‘turned out to be nothing less than facades designed to lure in unsuspecting victims, extract their money and then virtually disappear under the guise of delays, minimal to no performance, and no results,’ the plaintiffs said in their legal complaint.

The legal complaint stated the investors ‘were lured by the involvement, endorsement and credibility’ of the Shark Tank stars and ‘bought into the dream, paid their money, and then went through agonizing months, if not years, of frustration and distress of trying to get their products launched and businesses started with no results.’ 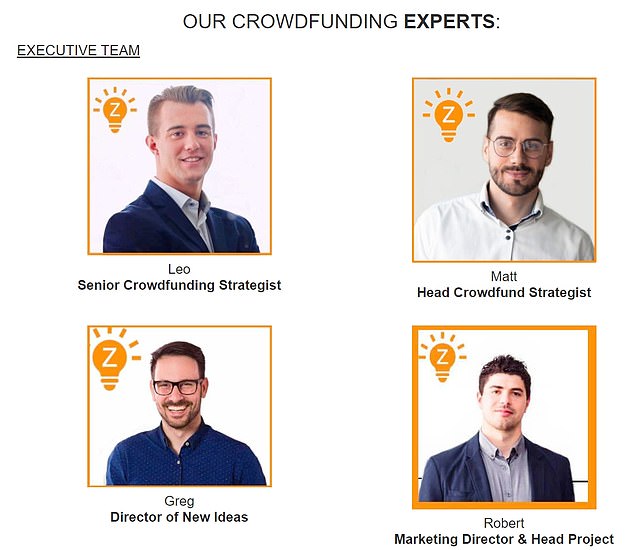 Before it was taken down, the Ideazon website displayed the company’s ‘executive team’ 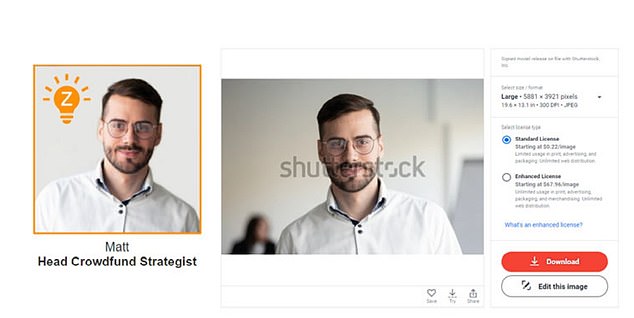 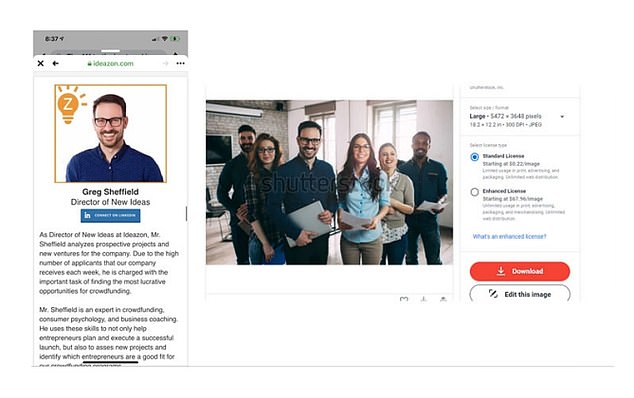 Moody, the lead plaintiff and founder of Bucket Social, told DailyMail.com about how her dreams were dashed in the alleged scam.

The young entrepreneur from Detroit said that she came up with the idea for her app after seeing exotic and interesting travel locations on social media, but being unable to find the original post or remember the location.

She planned to launch an app that would archive posts of interest from different social media site and map them for users, allowing them to visualize their bucket list of world travel destinations.

‘This was two months before my wedding day, and I was more obsessed with this app than my wedding day,’ she recalled. Moody noted that she did not come from a wealthy background, and took on a second job to help pay for her wedding.

She said that she was convinced to team up with InventureX after being led to believe that Harrington was a partner in the company, and seeing video and marketing materials containing O’Leary’s endorsement of the firm.

The lawsuit says that purported InventureX executive Mark Campbell told Moody on a phone call that she was a great candidate for InventureX, and that Kevin Harrington himself was going to be reviewing her project

After sending her a proposed contract, InventureX also sent Moody a video of Harrington ‘stating that he saw her project and was excited to work with her,’ according to the complaint. 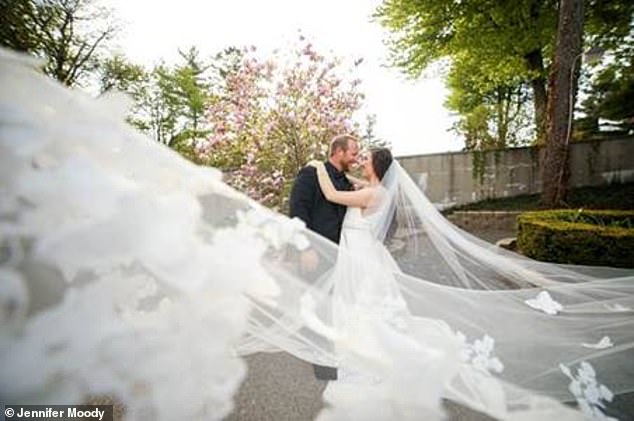 Moody worked a second job to pay for her wedding (above) and save up to launch her app, but says that her savings were wiped out by fraud

‘This was a big step for my husband and I, we took our wedding gift money and savings, and cashed out our stocks,’ she said in an interview.

‘I tried to do my due diligence and look into this company,’ she recalled. ‘It was a big deal to see Kevin Harrington on this website endorsing it.’

But after paying the $6,000 fee to InventureX, Moody says that things fell apart.

The company began demanding a $500 monthly fee, according to the complaint, and endlessly delayed the start of her crowdfunding campaign — kicking back the date five times, and not launching it to date.

‘This case arises from a diabolical and brazen scam to defraud what is believed to be hundreds, if not thousands, of innocent, hard-working entrepreneurs out of their last dollar,’ the complaint states.

It adds: ‘Make no mistake; this is a structured fraud scam from beginning to end.’

‘It has come to our attention that Kevin Harrington has been accused of various false allegations regarding a recent lawsuit. Kevin has been a proponent of entrepreneurs globally.

‘Kevin never had any business arrangement or contract with any of the Plaintiffs. This should be a dispute between the Plaintiffs and InventureX. Kevin simply did a video for this Company. Kevin has never owned any piece of the Company nor served any executive role within the Company.

‘Kevin is disturbed by the accusations and has been taken advantage of as a businessman. Kevin intends to pursue each and every person accountable and will defend the allegations contained in this complaint vigorously.’