NRL star Nathan Cleary has been cruelly trolled by fans over his acne before being sent from the field in the State of Origin after suffering a gruesome cut to the face .

The talented Blues halfback, 23, suffered a suspected fractured cheekbone after clashing with the elbow of teammate Tom Trbojevic early in the first half in front of 30,000 fans in Townsville.

It wasn’t until the 376h minute that the referees finally sent Cleary to the blood-bin as a steady stream continued to pour out of the deep laceration.

Social media was flooded with comments about Cleary’s blood-soaked face and his ‘horrible’ skin, with one even asking Nine to stop showing close-ups of him. 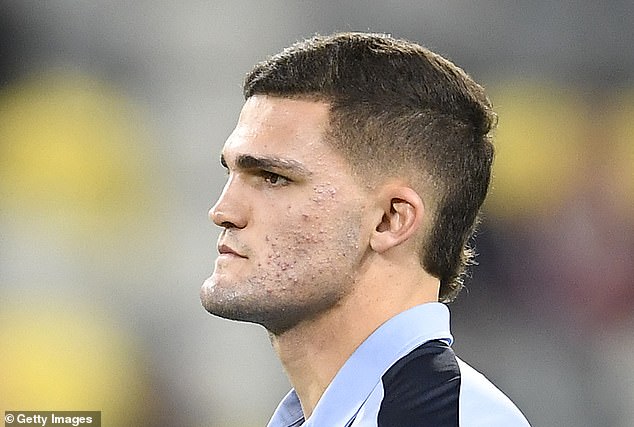 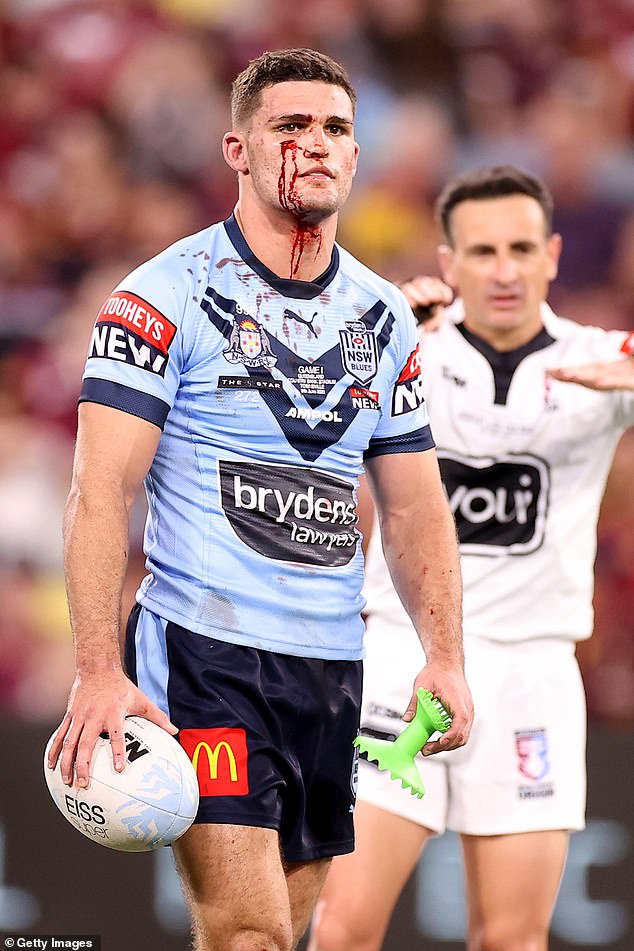 Viewers quickly began to mercilessly troll the player, with one user going as far to say they hated seeing close-ups of his face

‘Seriously, you’re on a million dollars a year and you can’t afford to see a dermatologist?’ wrote one cruel spectator.

‘My god it is insanely bad. He needs Roaccutane,’ wrote a third.

‘I hate to be the one to suggest it, but Nathan Cleary would be a great adversary for #Clearasil’, another man tweeted.

‘I suffered with acne for years and was so glad to get through it.  Poor sod in the bad light.’

Others questioned why Cleary was allowed to play for so long without being taken off the field to clean up the nasty cut on his face.

‘Siri, how many litres of blood can you lose until you die? – Nathan Cleary at half-time,’ joked one.

‘Nathan Cleary’s heroics after losing six pints of blood in that first half will go down in Origin folklore,’ added another. 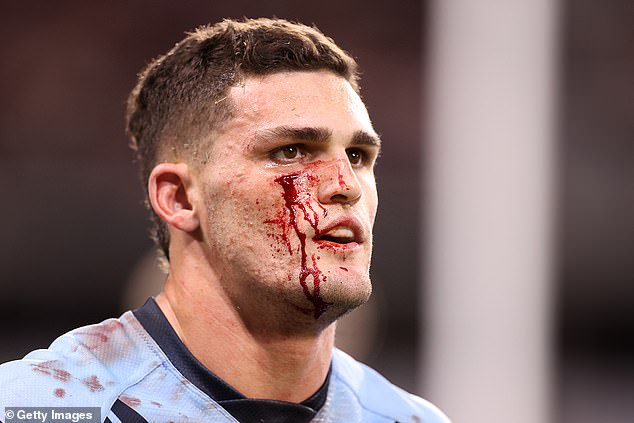 Cleary was brilliant in leading the Blues to an emphatic 50-6 victory after copping criticism he underperformed in big games.

Trbojevic scored his second Origin hat-trick and set up another as he popped up all over the field, helping NSW blow the Maroons off the park in the series opener.

The Blues backs were too strong and too fast for Queensland, who weren’t able to take advantage of a one-sided home crowd of 27,533 in Townsville’s maiden Origin.

Key forward Christian Welch lasted just 13 minutes before being ruled out with a concussion, while Kyle Feldt endured a horror debut on his home turf as his side went down 20-0 after 29 minutes.

Feldt ended up on report for a late and high shot along with Moeaki Fotuaika, while Cameron Munster was pulled up for striking Liam Martin with his feet.

The Maroons’ last-tackle options were also poor, while they broke the NSW line just once.

In comparison, the Blues were brilliant.

Almost untouchable for the past two months at Manly, Trbojevic virtually created his own position as a roaming player whenever the Blues went into attack mode.

Mitchell was also a constant threat, slicing through the line early in the lead up to NSW’s first try and later scoring twice from kicks.

He also made a crucial up-and-in tackle on Valentine Holmes to force an error just before half-time, as the Maroons eyed a comeback through a second straight try

Tariq Sims provided the play of the game for To’o’s first try with a two-man cut-out ball offload, as the Penrith winger also finished with 215 metres out of his own end.

Luai and Cleary were also both great in the halves, each busting the game open at times as they brought their Penrith form into Origin.

Viewers were quick to advise the player on acne treatments, one woman suggesting Cleary try Tretinoin, while another said he needed Roaccutane

Euro 2020: Croatia 'will NOT take a knee at Wembley ahead of opening game against England on Sunday'

How much does spin rate factor into the success of MLB's top pitchers?

Blake Lively through the years, including some of her best style moments

An astonishing archive of 100,000 photographs, including never before seen images of the Gallipoli landing and...