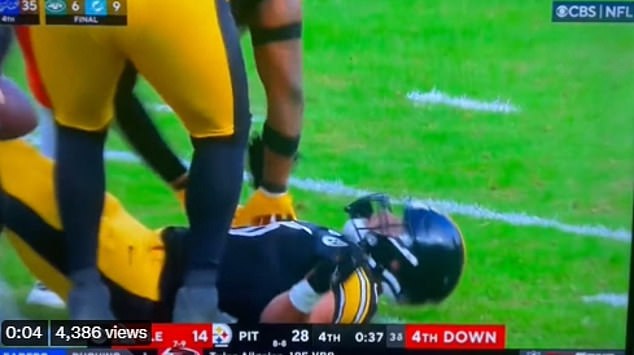 ‘Unprofessional and disgusting’: Steelers SLAMMED after players celebrate a sack by performing mock ‘CPR’ on linebacker Alex Highsmith, days after Damar Hamlin had a cardiac arrest playing for the Bills and needed reviving on the field

By Jack Bezants For Dailymail.Com

Football fans were left disgusted by a tactless moment in the Steelers game on Sunday, where a Pittsburgh player appeared to celebrate a sack form Alex Highsmith by pretending to give him CPR.

The incident comes just days after Damar Hamlin collapsed playing for the Buffalo Bills against the Cincinnati Bengals and needed to be revived on the field after having a cardiac arrest.

After Highsmith challenged Deshaun Watson of the Cleveland Browns, he laid on his back on the ground. Then, a teammate was filmed rushing over to congratulate him before performing a mock chest compression on Highsmith.

The camera angle didn’t clearly indicate who the player in question was, but Highsmith didn’t appear to find the incident too amusing and quickly got up and back to his feet.

But football fans watching on noticed immediately and many took to social media in outrage.

‘I’ve lost all respect for that team. If Mike Tomlin doesn’t address that despicable act, he’ll lose my respect too,’ one said, while another posted: ‘Not a good look Steelers, not even close! Unprofessional and disgusting.’

Another wrote: ‘What the hell was that CPR celebration from that Steelers player?!’

A different fan said: ‘Nice to see the Steelers paying tribute and showing love to Hamlin by doing a CPR celebration on that sack.’

The CPR celebration has been seen before in football to celebrate a sack, but the timing of it this weekend left many viewers feeling uncomfortable due to what happened with Hamlin.

Earlier this week, four Steelers players volunteered to deliver toys for a children’s daycare center where Hamlin’s mother has worked. Levi Wallace, Tre Norwood, Terrell Edmunds and Cameron Sutton carried out the gesture as a symbol of support.

The NFL came together across the weekend to send well wishes to Hamlin after Monday’s shocking scenes. The Steelers and Browns gathered in the midfield to pray for Hamlin on Sunday – a scene that has unfolded similarly across a number of the final weekend of regular season games in the NFL.

Hamlin, 24, has shared the first image of himself from his hospital bed in Cincinnati

Hamlin himself shared his first picture on social media since being taken ill, from his hospital bed, and released a range of t-shirts to raise money for those who have taken care of him.

On Saturday, Hamlin thanked people for the relentless support he has received, writing on Instagram: ‘When you put real love out into the world it comes back to you 3x’s as much.

‘The love has been overwhelming but I’m thankful for every single person that prayed for me and reached out. We brung (sic) the world back together behind this.

‘If you know me you know this only gona make me stronger. On a long road keep praying for me.’

The Steelers, meanwhile, recorded a 28-14 victory on Sunday but it wasn’t enough to take them into the playoffs. They finish third in the AFC North standings.