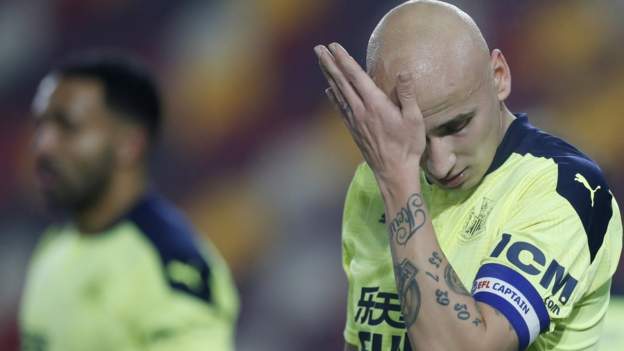 Newcastle United boss Steve Bruce says he will “have to accept the criticism” after his side’s Carabao Cup quarter-final loss to Championship Brentford.

Bruce has faced questions over his side’s conservative style of play.

“There’s no-one more disappointed than me. I’m as frustrated, disappointed and bitterly upset as the huge following we have,” said Bruce.

“I have to accept the criticism – which is fully justified – get ready for the challenge of a difficult Christmas period, dust ourselves down and get on with it.

“We were too slow in possession. We didn’t do enough, we didn’t cause them enough problems, especially with the attacking players we had on the pitch.

“So we have to accept what’s coming our way.”

Why are fans unhappy?

On the surface, it would appear there is not too much to worry about at Newcastle.

The Magpies are 12th in the Premier League, eight points clear of the relegation zone. They have scored 17 goals – the 13th best in the league – and have only drawn a blank four times all season.

And even going out in the quarter-final of a cup competition might not seem like the worst state of affairs.

But many Newcastle fans will be frustrated by the manner of their exit to a second-tier side who made several changes to their strongest line-up, with few chances created for their top scorer Callum Wilson.

It was a performance evocative of the Magpies’ approach this season, with some statistics in the Premier League highlighting a lack of attacking intent:

“Yes, he has limited tools, but what you want is a bit more adventure, aggression, bravery,” said former England keeper Rob Green on BBC Radio 5 Live.

“You look at the games they’ve played and it was predictable. As a Newcastle fan, you think: ‘We’ll probably go out of the cup not creating a lot.”

Former England winger Karen Carney added: “I couldn’t see what Newcastle were trying to do.

“You’ve got players with good crossing ability and a good aerial threat and yet, up until late on, there weren’t any crosses. It was really baffling.

“I’m scratching my head thinking it’s overcomplicated and you’re making it more difficult than it actually was.”

‘Are the players playing for me? I think they are?’

Newcastle now face a difficult run of fixtures over the Christmas and New Year period, travelling to Manchester City on Saturday before home games against leaders Liverpool on 30 December and second-placed Leicester City on 3 January.

But Bruce believes he has the trust of his players in what could prove a tricky period.

“Are the players playing for me? I think they are,” he said.

“Maybe they’re not playing well enough, but it’s not without effort and determination.”

And Carney also said a lack of effort is not the issue for Bruce’s players.

“Players always try, but for me it’s about intensity and I don’t know if that comes from the staff, who say drop off,” she said.

“When you’re playing a team from a lower league, you have to stamp your authority. You have to bring pace and intensity and put the opposition on the back foot. I never saw that once from Newcastle.

“If I were a Newcastle fan, that’s why I’d be disappointed. I’m not saying they didn’t try – but there’s not enough for me tonight.”