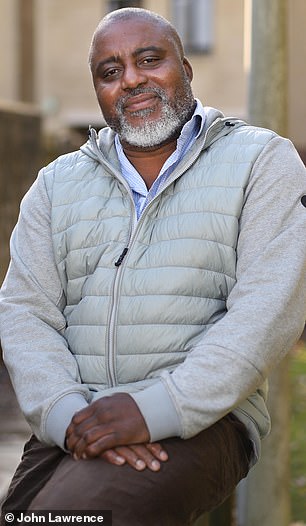 As a former England rugby player and aged just 48, Steve Ojomoh might have seemed an unlikely candidate for a stroke. Indeed, he thought he was perfectly fit and healthy

As a former England rugby player and aged just 48, Steve Ojomoh might have seemed an unlikely candidate for a stroke. Indeed, he thought he was perfectly fit and healthy.

So two years ago, when he developed an excruciating headache, he put it down to stress and a poor night’s sleep.

‘I became aware of an awful fizzing sensation across my whole head,’ recalls Steve, who had 12 caps for England during the 1990s and played for Bath and Gloucester.

But he took a couple of paracetamol and carried on with a business lunch.

Less than 24 hours later, though, Steve was in hospital fighting for his life.

When the headache didn’t abate, he says, he had thought it might be a tumour — ‘but a stroke never crossed my mind. I thought only old people had strokes.

‘I couldn’t believe someone as young and as apparently healthy as me could have one.’

Yet Steve’s experience is not that unusual. A study by Public Health England in 2018 found that 38 per cent of first-time strokes occur in people aged between 40 and 69.

And according to the Stroke Association, a quarter of strokes in the UK are now happening to people of working age.

A stroke occurs when blood flow to the brain is interrupted, either by a clot (known as an ischaemic stroke) or when a blood vessel bursts (a haemorrhagic stroke).

Explaining the rise in younger patients, David Werring, a professor of clinical neurology at the National Hospital for Neurology and Neurosurgery in London, says they are less likely to be aware that they have raised blood pressure, blood sugar or cholesterol than older people, as they are less likely to bother with annual health checks available from their GP which can identify such stroke risks.

Lifestyle has a very strong role to play in stroke risk. ‘Lack of exercise, poor diet, being overweight, having diabetes and/or high cholesterol are all contributing risk factors for stroke at all ages,’ says Professor Werring.

‘But the strongest risk factor, particularly for haemorrhagic stroke, is high blood pressure.

‘People now in their 30s and 40s might not think they have problems and many lead unhealthy lives not realising their blood pressure is dangerously high.’ 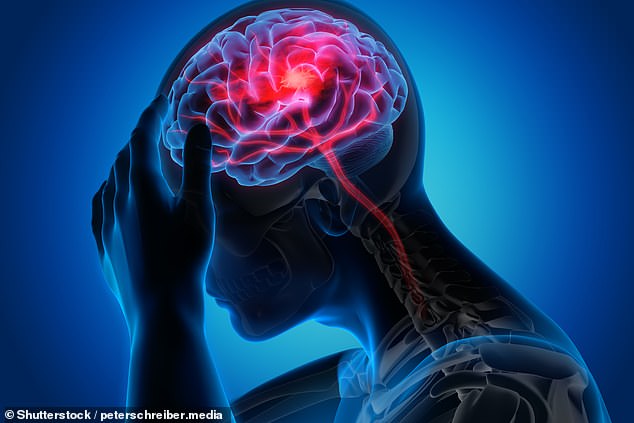 According to the Stroke Association, 55 per cent of people who have a stroke have hypertension. And for every ten people diagnosed with high blood pressure, seven remain undiagnosed and untreated — which could add up to more than five million people at risk in England alone.

‘High blood pressure damages the blood vessels by making them less elastic and increases the likelihood of stroke due to artery-blocking blood clots and brain haemorrhages from a ruptured small artery,’ says Professor Werring.

Before his stroke, Steve, now 50, had no idea that his blood pressure was dangerously high. Nor did he realise that his ethnicity — he was born in Nigeria — also put him at greater risk of a stroke (studies show that people of West African and Asian descent are more likely to suffer from hypertension).

It is not known what causes high blood pressure, but genetics and an unhealthy diet play a part.

In many ways, Steve, who runs a childcare business and lives in Trowbridge, Wiltshire, with his wife Lisa, 48, a business consultant, and their children Max, 20, and Ava, 12, can now see that he ticked the boxes for many of the risk factors for stroke.

‘I was so busy with work that I wasn’t making time to exercise,’ he says. ‘I loved carbs and a meal wasn’t a meal unless my plate was piled with rice and potatoes. I tended to binge drink when I went out, and I was incredibly stressed.’

Professor Werring says that stress alone won’t cause a stroke — ‘but stress does cause inflammation in the body, which raises blood pressure and levels of fat and sugar in the blood, so it could be a contributing factor’.

The day of his stroke, back at home after his lunch, Steve’s headache built and built.

‘Over the next 18 hours, the agony became so intense that just breathing hurt,’ says Steve. ‘I kept telling myself it was stress — there was so much going on and I’d been feeling like a pressure cooker.’

With his wife away on business, Steve did not get checked until the following morning as he didn’t want to disrupt his children’s sleep. By 6am, he felt like his head might explode and he was dizzy and confused. He vaguely remembers crawling into his son Max’s bedroom and begging for a lift to the local A&E in Bath.

Tests showed he had had a haemorrhagic stroke and he was transferred to a specialist stroke unit at Southmead Hospital in Bristol, 13 miles away. In theatre, blood was drained from his brain and he came round in intensive care to find Lisa by his side.

‘When I was told I’d had a stroke and was lucky to be alive, I was confused and traumatised,’ says Steve, who spent the next four weeks in hospital. He needed the drain in his head for another fortnight and his blood pressure was monitored to ensure he wasn’t at risk of having another stroke.

Back at home, he had to take it easy. Although he had no severe physical impairments from the stroke, his memory and processing skills were badly hit. He had to take a year off from his business and says that even now he struggles to be around too many people as he is easily overwhelmed.

‘I feel fortunate that I didn’t have my stroke during the pandemic as that has made things much more difficult, but I often still feel vulnerable,’ says Steve.

But the stroke gave him the fright he needed to change his lifestyle. He has addressed his stress levels and overhauled his diet. He is also on medication to help get his blood pressure down.

‘I started playing golf a couple of times a week as it was a wonderful distraction and great exercise,’ says Steve. He also makes sure he walks at least 10,000 steps a day.

‘I have lost a stone-and-a-half and stopped drinking completely. I’ve also cut out carbs and now eat lots of fruit and veg.’

Regardless of age, recovery from a stroke doesn’t follow a specific timetable, says Professor Werring. Around a third of stroke patients end up with long-term disability.

‘We know that younger people recover more fully than older patients, possibly because their brains have more capacity to reorganise and adapt to injury from stroke,’ says Professor Werring.

‘The pandemic has made the recovery process more challenging for people, but virtual rehabilitation and therapy is proving possible and effective.’

Steve recognises that his own recovery is going to take time. ‘I can’t multi-task any more and it definitely takes my brain longer to work,’ he says. ‘But I am still here, and I am learning to live my life in a different way. I have been lucky to get a second chance.’

Understanding the make-up of cells can provide vital clues to a wide range of diseases.

The Etch a Cell science project, launched in 2017 and run by the Francis Crick Institute in London, asked members of the public to analyse images of cells produced using electron microscopes (which show particularly high resolution images).

After online training, volunteers used their computer to draw around a cell feature known as the nuclear envelope — the barrier that separates genetic information or DNA, inside the cell brain (the nucleus), from the chemicals and reactions going on in the rest of the cell. Scientists believe the ‘nuclear envelope’ plays a key role in the cell, which means changes to the area can cause a range of diseases.

More than 104,000 classifications were submitted by thousands of volunteers and will now be used to better understand the biology of cells and train computers to analyse data even faster.

Claim: A wedge made from silicone that’s placed under the heel inside the shoe, it’s said to help with flat feet, high arches or knee pain by providing support.

It also has a soft ‘cushioning’ on the heel to relieve pain from heel spurs — growths that can cause pain.

Expert verdict: Mike O’Neill, a podiatrist at the private Princess Margaret Hospital, Windsor, says: ‘A heel spur is often associated with plantar fasciitis — painful inflammation of the fibrous band of connective tissue [plantar fascia] that runs along the bottom of the foot. Shock absorption under the heel is important in helping resolve this heel pain.

‘These wedges are small enough to fit in most footwear, which is helpful as many support insoles are too large to use and have to be cut down. Though exactly how they help with knee pain or high arches is unclear.’ 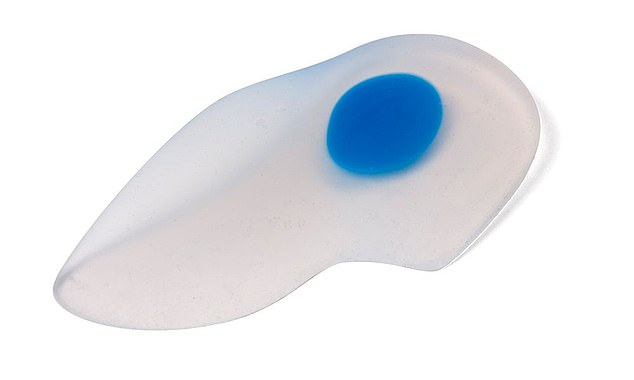 Will there be enough Christmas trees this year?

Why are doctors STILL failing to tell patients they may never be able to give up antidepressants?

DR ELLIE CANNON: What it’s like helping Britain to jab its way to freedom

Reunited after the Manchester Arena bombing

What can be done about a 'clicky' ear? DR MARTIN SCURR answers your health questions

Gold price is down 6.7% in the past two weeks. Here’s what we can expect in February