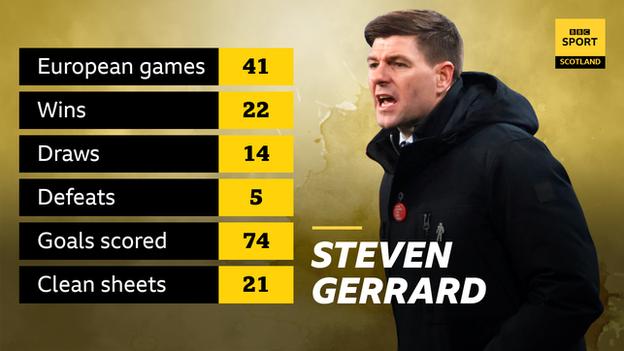 Rangers have reached the last 32 of the Europa League for the second successive season and manager Steven Gerrard’s European stats continue to impress.

It was his 22nd European win in his third campaign as manager – equalling the mark set by Ibrox predecessor Dick Advocaat and one short of Walter Smith’s tally.

Here, BBC Scotland looks at how the former England captain has propelled himself into the realms of the club’s most successful European managers.

Gerrard’s most notable successes have come against Portuguese opposition.

Braga and Porto last season, and Benfica this term, could not get the better of Rangers, though the Ibrox side twice lost two-goal leads to draw home and away with the latter this term.

Feyenoord were beaten at Ibrox last year before Rangers claimed a draw in Rotterdam against the Dutch. And this season, the Scots won home and away against Belgians Standard Liege and Lech Poznan of Poland.

“To be at this level now and beating teams shows the big steps we have taken as a group,” Gerrard said after Thursday’s 2-0 win over Poznan.

“The challenge now is can we keep building on it? This is the best I have felt in terms of our squad strength and I do have confidence in the 24 or 25 players that we have got.” 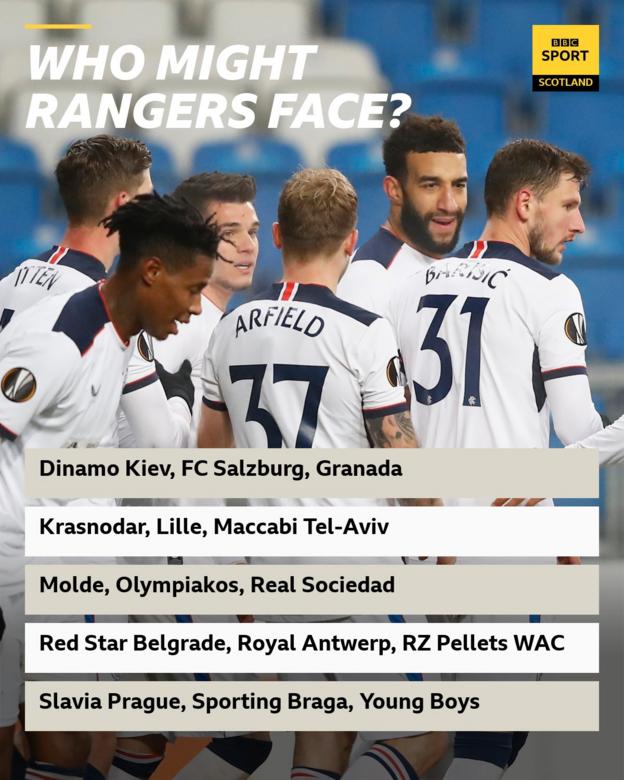 Consistency of performances and results

Prior to 2019, the club had not won two home games in a group stage campaign in either the Champions or Europa League. But that stat ended last season and was emulated this time round.

This season was also Rangers’ first unbeaten group campaign in either competition since 1992-93.

Rangers have lost three group games in three years under Gerrard and won or drawn every one of their qualifying matches since 2018.

Handling the pressure of qualifying

In total, Gerrard’s Rangers have come through 11 qualifying ties over the past three seasons, including eight two-legged ties and three one-off games in this season’s Covid-19 affected competition.

Those draws and wins no doubt boost the manager’s overall stats in Europe, and the likes of Walter Smith, Dick Advocaat, Graeme Souness and Alex McLeish had fewer qualifying rounds to contend with. 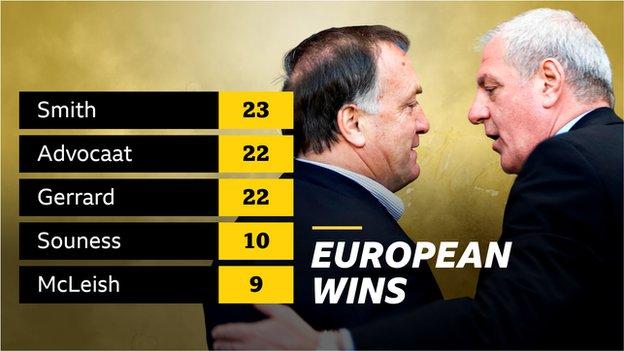 But given Rangers were knocked out by Luxembourg’s Progres Niederkorn the year before Gerrard arrived, navigating those matches were not a given.

And Gerrard’s team have not been embarrassed in Europe. Of their five defeats over the past three years, four have been away from home by a single goal, with the 3-1 home loss to Bayer Leverkusen the only exception.

“I think it is a huge achievement to win the group and it is thoroughly deserved,” the manager added.

“Going on our performances over the six games, we deserve to be in the number one position and with a bit more experience we could have won the six games.”

‘A really intimidating side to play’ – analysis

With a performance that wasn’t scintillating, they still comfortably beat Lech Poznan, scored two goals and kept a clean sheet. You can’t ask too much more. They’re so efficient and clinical and it’s a wonderful trait to have.

They’re creating a fear factor now. They’re a really intimidating side to play in how they function. They don’t change. They say, ‘right, this is how we play, you know how we play, can you deal with it?’ And so far, they’ve not been able to be stopped.