A charity boss is suing Laurence Fox after the actor labelled him and others ‘paedophiles’ during a bizarre online spat.

Simon Blake, the deputy chair of LGBT charity Stonewall said in a Twitter statement on Monday that he was suing Fox for defamation.

Earlier on Monday, Fox was embroiled in a heated exchange with a number of Twitter users which included Mr Blake and Coronation Street actress Nicola Thorp.

The Lewis star called them ‘paedophiles’ after they had claimed he was ‘racist’.

On Saturday, Fox had accused Sainsbury’s of ‘promoting racial segregation and discrimination’ and promised to boycott the supermarket chain after it promoted Black History Month.

As he faced a backlash for his views, he clapped back at people ‘falsely accusing him of racism’ by retaliating with unsubstantiated slurs calling them ‘paedophiles’.

Mr Blake then tweeted asking Fox to delete the ‘untrue’ slur but when Fox did not initially do so, he released a statement saying Fox had ‘defamed’ him and that he had instructed lawyers to pursue legal action. 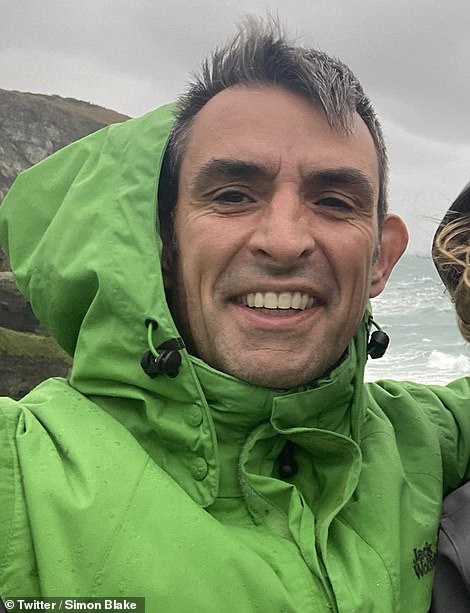 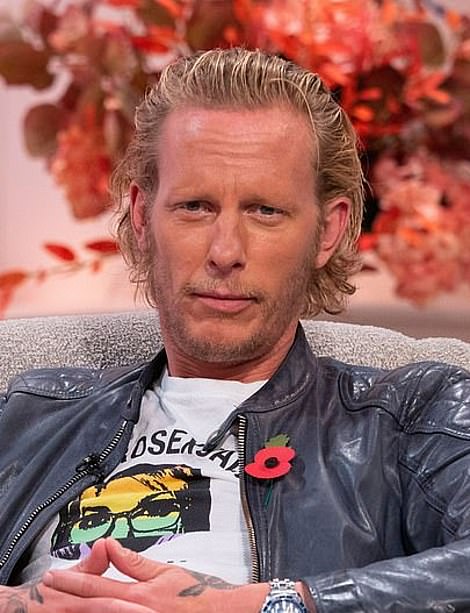 Simon Blake, the deputy chair of LGBT charity Stonewall, is suing Laurence Fox after the actor labelled him and others ‘paedophiles’ during a bizarre online spat

He wrote: ‘On Sunday afternoon I saw a tweet from Laurence Fox suggesting that he would stop shopping in Sainsbury’s and calling on others to do the same. This was his reaction to Sainsbury’s statement that they are an inclusive retailer.

‘He suggested that Sainsbury’s actively anti-racist stance is promoting racial segregation and discrimination.

‘I disagreed strongly with his view and I expressed that in a tweet. Whilst I regret the unnecessary language I used, which is not in line with the way I like to conduct myself, I feel strongly about this issue.

‘In response Mr Fox seriously defamed me and I have instructed Mark Lewis from Patron Law to sue for defamation.

‘I want to make it absolutely clear that I will always stand against racism and will do my best to be a strong White ally.

‘This is particularly important because we know the negative impact that racism and oppression has on the mental health and wellbeing of Black people and People of colour.

Fox has since removed his posts, writing on Sunday: ‘I have deleted the tweets posted yesterday, in response to being repeatedly, continuously and falsely smeared as a racist.’

In response to Mr Blake’s announcement of legal action, a spokesman for Fox’s newly-formed political party, named Reclaim, told MailOnline: ‘We note the stated intention and the judicious wording of the tweet.

‘However, unless and until intent becomes reality, we have no further comment.’ 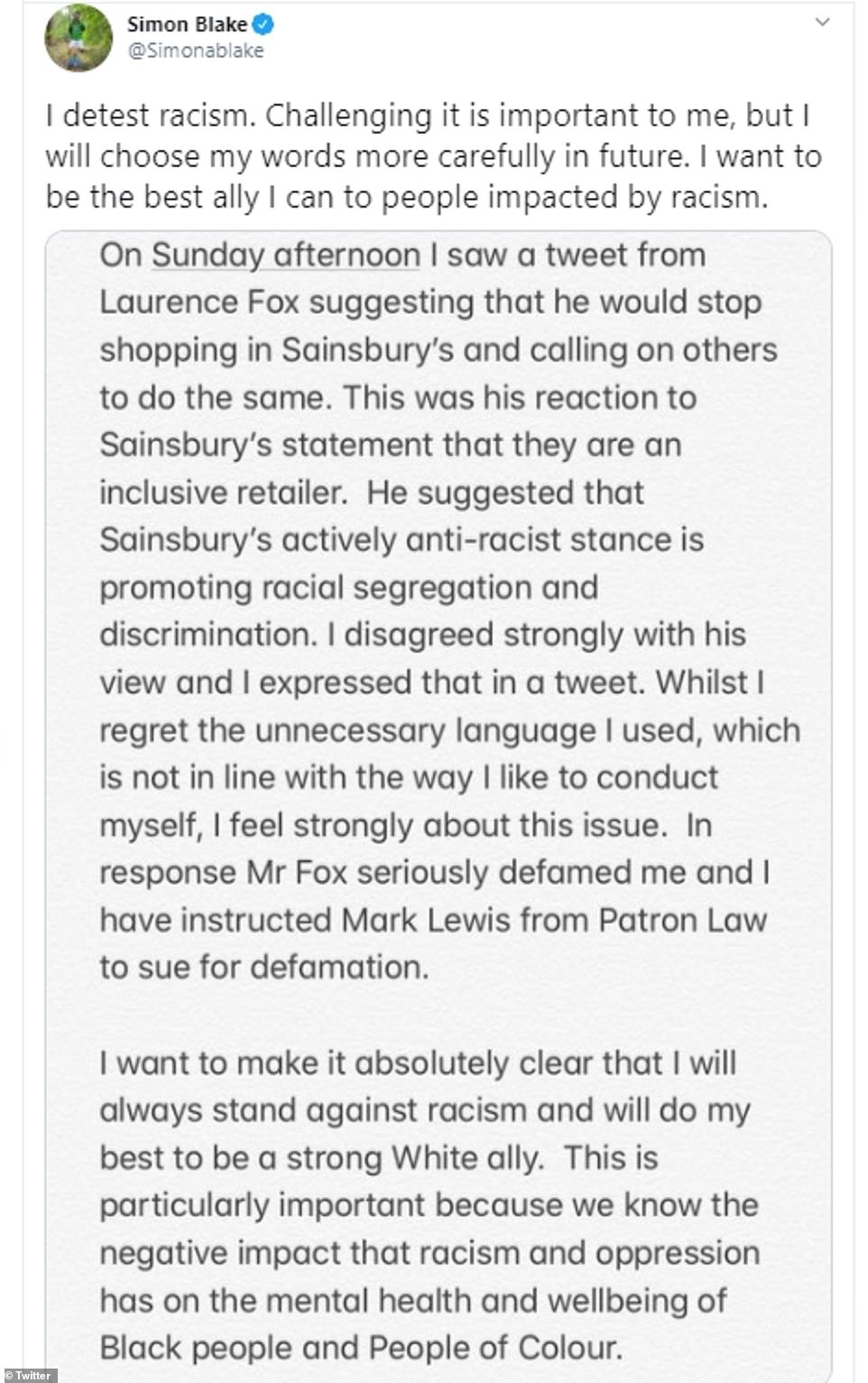 Mr Blake said Fox had defamed him and that he was pursuing legal action against him. He also said he regretted the language he used in his criticism of Fox’s opposition to Sainsbury’s 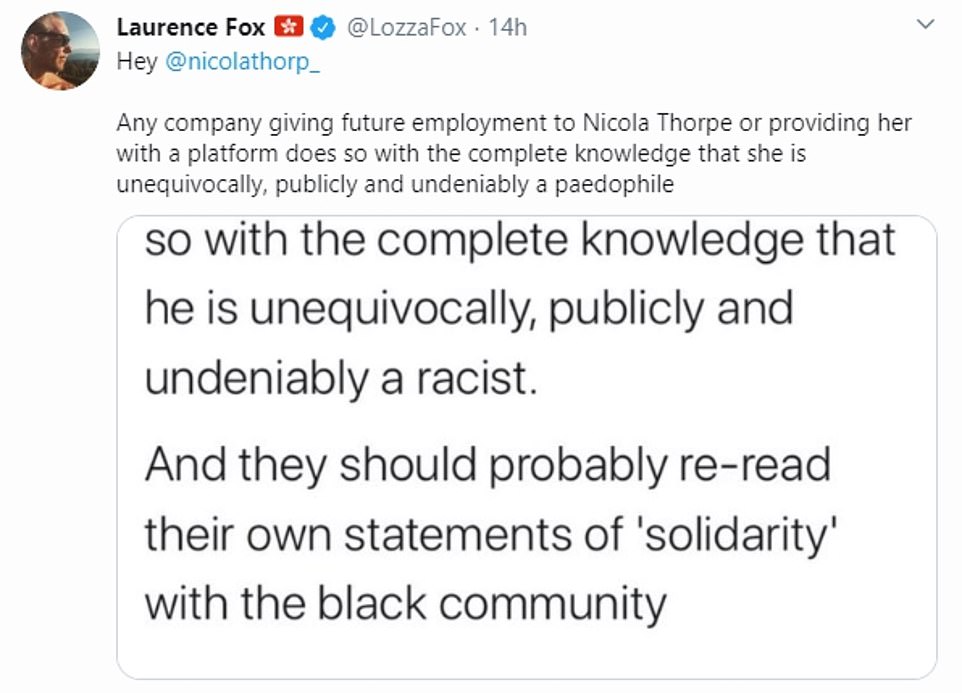 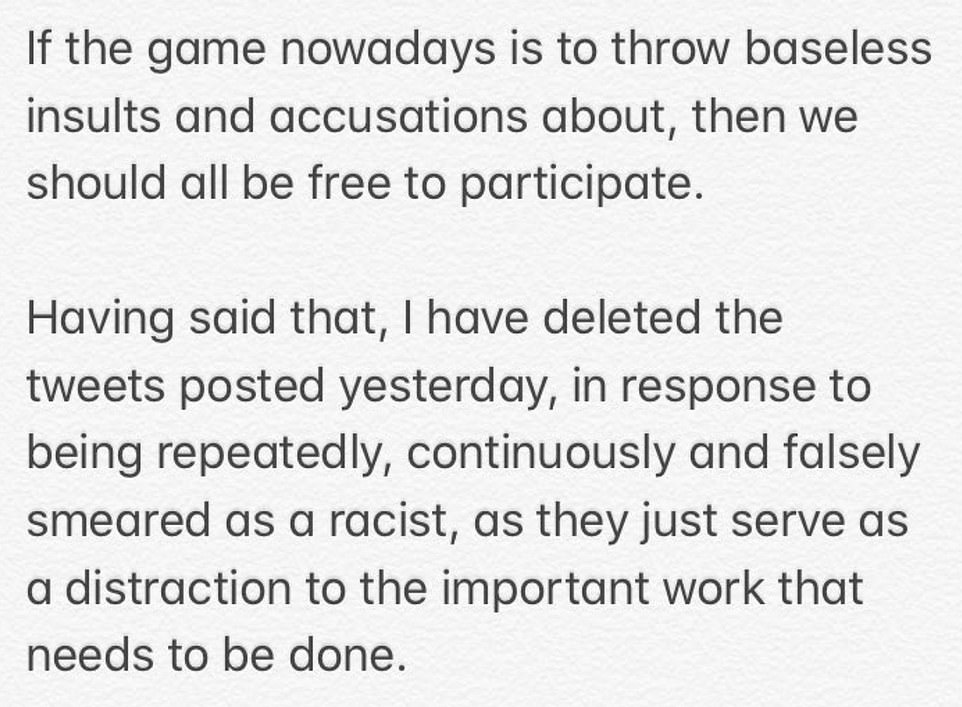 Fox has since removed the posts, writing: ‘I have deleted the tweets posted yesterday, in response to being repeatedly, continuously and falsely smeared as a racist.’

At the weekend Fox found himself in a fiery debate with former Coronation Street actress Nicola Thorp after she said Fox was ‘unequivocally, publicly and undeniably a racist’.

He hit back: ‘Any company giving future employment to Nicola Thorpe or providing her with a platform does so with the complete knowledge that she is unequivocally, publicly and undeniably a paedophile.[sic]’

Fox said on Sunday: ‘Language is powerful. To accuse someone of racism without any evidence whatsoever to back up that accusation is a deep slander.

‘It carries the same stigma and reputation destroying harm as accusing someone of paedophilia. Here endeth the lesson.’

The row comes after the actor, who recently announced he was launching his own political party to ‘reclaim British values’, denounced the supermarket on Twitter.

He said: ‘Dear Sainsbury’s. I won’t be shopping in your supermarket ever again whilst you promote racial segregation and discrimination. I sincerely hope others join me. RT’

It came in the wake of Sainsbury’s announcing they would be marking Black History Month, an annual celebration of achievements of the black community, recognising the central role black people have played in history.

The supermarket says its aim is to be ‘the most inclusive retailer’ where ‘every single one of our colleagues feels safe and supported at work’.

The company said it is actively pushing for change for black people in the UK and want all their customers and colleagues to be themselves and feel celebrated when they shop at Sainsbury’s.

In a statement, Sainsbury’s said: ‘We are proud to celebrate Black History Month, together with our Black colleagues, customers and communities and we will not tolerate racism.

‘We proudly represent and serve our diverse society and anyone who does not want to shop with an inclusive retailer is welcome to shop elsewhere.’

Fox told his 239,000 Twitter followers that despite it being his closest supermarket, they would not be getting his custom until they ‘address their regressive and segregationist policies’.

His response sparked debate on Twitter with some backing his views while others said Sainsbury’s tweet had had the desired effect.

One wrote: ‘Beautifully put! I cannot believe how wrong Sainsburys has got this.

‘This idiocy has to have come down from Board level. Really feel for their staff – how the hell do they handle this?’ 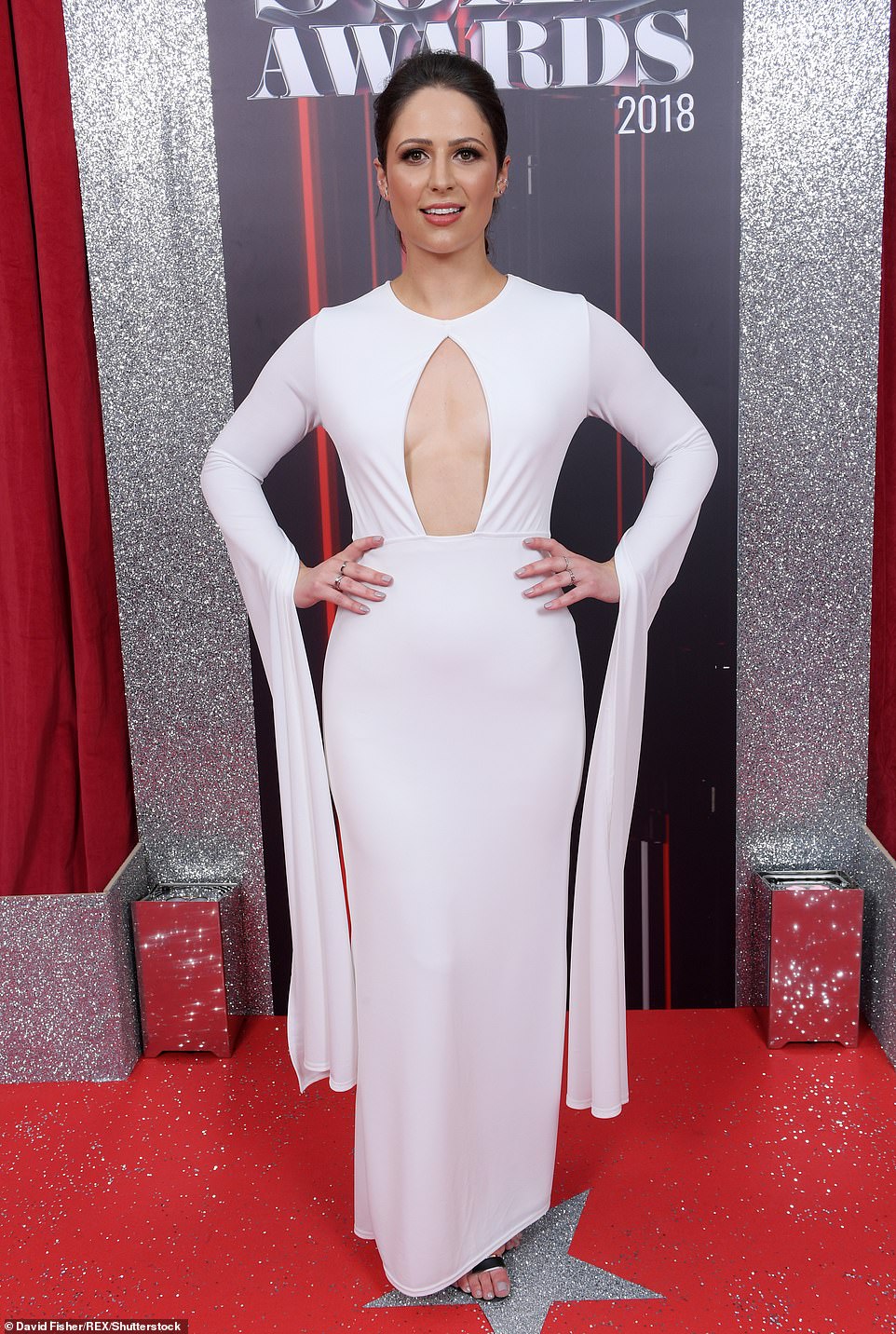 At the weekend Fox found himself in a fiery debate with former Coronation Street actress Nicola Thorp (pictured) – after she said Fox was ‘unequivocally, publicly and undeniably a racist’ 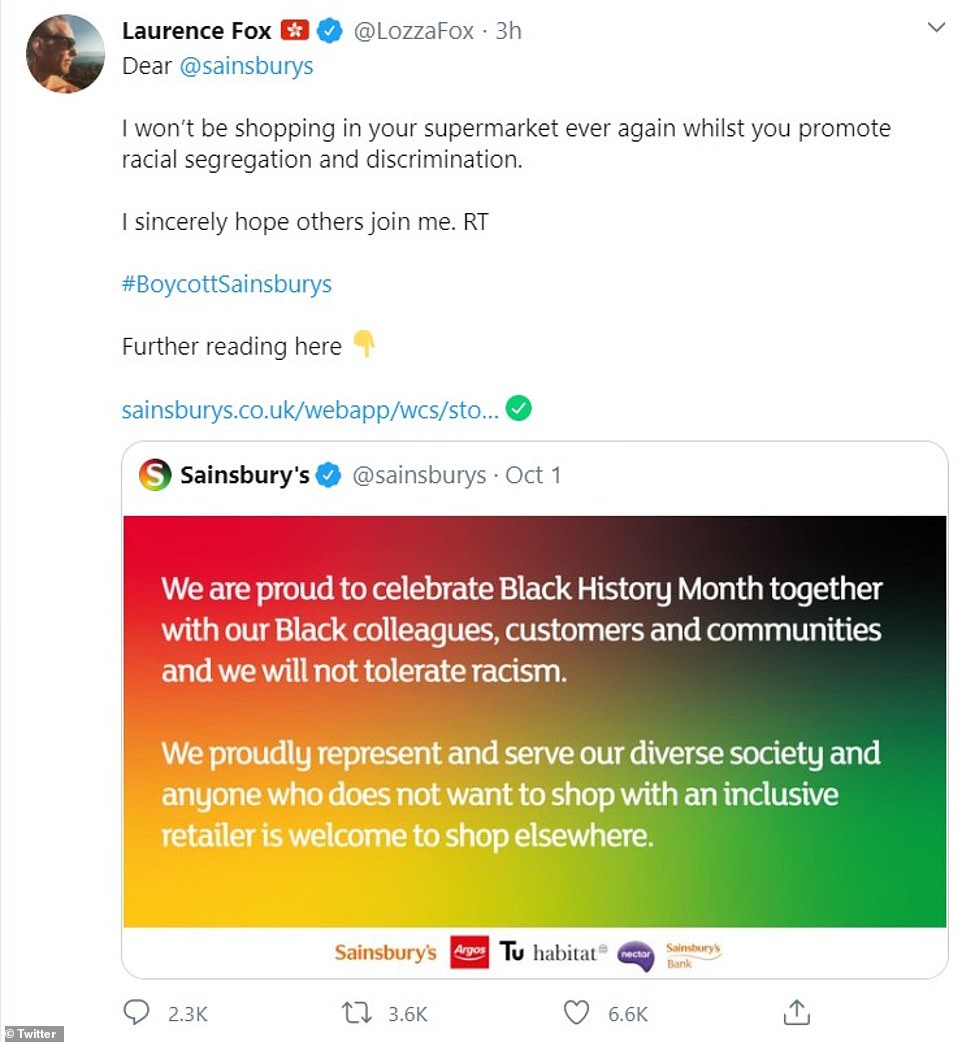 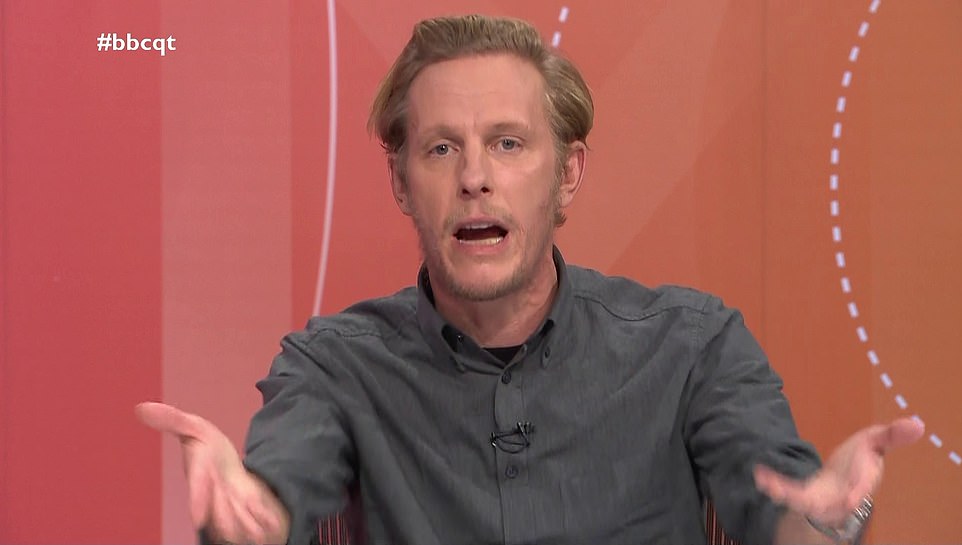 Fox, who sparked controversy when he said suggestions of ‘racism’ over how the Duchess of Sussex was treated in some quarters was ‘boring’, says among his new party’s aims are reforming the BBC, protecting free speech and celebrating Britain’s contribution to the world

The actor has received substantial sums from former Tory donors to launch his own political party provisionally called Reclaim and hopes to stand dozens of candidates across the UK, he says

Fox, who has been a fierce critic of the BBC, sparked controversy when he said suggestions of ‘racism’ over how the Duchess of Sussex was treated in some quarters was ‘boring’.

He also hit out at black and working class actors for complaining about the industry once they have ‘five million quid in the bank’.

A Westminster source said the new party is a version of UKIP for the culture wars and believes it could attract hundreds of thousands of unhappy Conservative voters.

Sources close to Fox said the party does not see itself as strictly left or right wing but will be a broad church.

Planning has been underway for the last two months and backers include former Tory donor Jeremy Hosking.

Staff are already being recruited for the party after Fox was launched into the political arena after his performance on Question Time in January.

Laurence Fox announced last month that he was launching a new political party called the Reclaim Party in a bid to ‘reclaim British values’.

The actor, 42, has received substantial sums from former Tory donors and hopes to stand dozens of candidates across the UK.

The Lewis star says he wants to provide a movement for people who are ‘tired of being told that we represent the very thing we have, in history, stood together against’.

He hopes to launch the party next month and the name is subject to the Electoral Commission’s approval.

Laurence Fox and his past controversies

January 16, 2020: Fox was involved in a heated debate with the academic and ethnicity lecturer Rachel Boyle after she called him ‘a white privileged male’ on BBC’s Question Time.

The 41-year-old accused Ms Boyle, an academic at Edge Hill University on Merseyside, of ‘being racist’ after she called him ‘a white privileged male’ for denying the Duchess of Sussex was hounded from Britain for being mixed-race.

As the row continued the following day he quoted Martin Luther King’s 1963 ‘I have a dream’ speech about living in a nation where children ‘will not be judged by the colour of their skin but by the content of their character’.

He said: ‘This is the position I took last night and I live by in life. If you can improve on it, I’m all ears. Or you can keep screeching ”Racist!” at me and I can carry on having a jolly good giggle at your expense. The tide is turning’.

January 17, 2020: The actor later went on to reveal that he does not date women under the age of 35 because they are ‘too woke’ and many of them are ‘absolutely bonkers’ during an interview with the Delingpod podcast.

During the podcast , Fox said that he called off a relationship with a former partner because she praised a Gillette advert which highlighted ‘toxic masculinity.’

January 23, 2020: Fox apologised for his comments about the inclusion of a Sikh soldier in the First World War film 1917 by Sir Sam Mendes.

The actor had initially referred to ‘the oddness in the casting’ of a Sikh soldier and was met by widespread criticism by historians who confirmed that Sikhs had served in the British Army.

Fox later tweeted: ‘Fellow humans who are Sikhs, I am as moved by the sacrifices your relatives made as I am by the loss of all those who die in war, whatever creed or colour.

‘Please accept my apology for being clumsy in the way I expressed myself.’

June 18, 2020: In a piece for the Spectator, Fox, questioned if Meghan Markle stepped down as a working royal because she did not get the ‘limelight’

In September 2020, Fox said that he had been ‘cancelled’ by fellow actor Rebecca Front because she had blocked him on Twitter over his use of the ‘All Lives Matter’ counter-slogan in response to the Black Lives Matter movement.

Fox later apologised for revealing this through tweeting a private text conversation between the pair, in which Front had explained her reasons for blocking him.