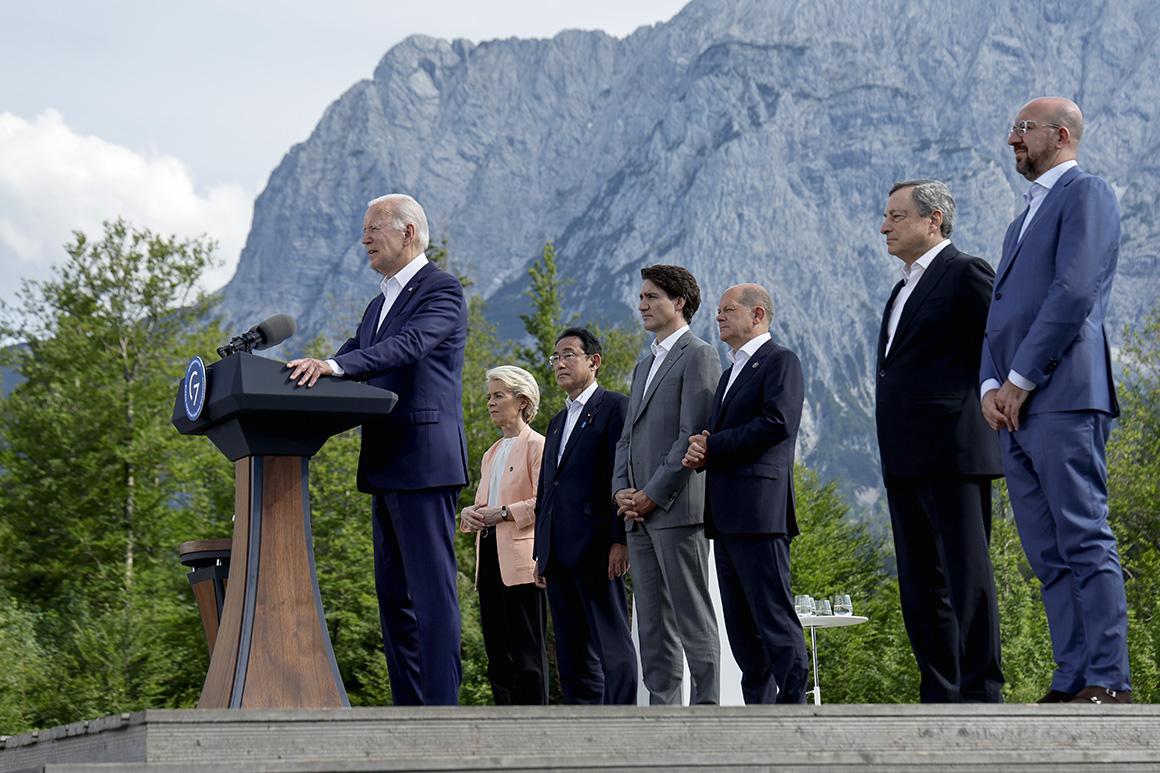 Among the fiercest critics of the decision were some of the world leaders flanking Biden at the German castle on Sunday. British Prime Minister Boris Johnson deemed it “a big step backwards,” while Canadian Prime Minister Justin Trudeau declared, “No government, politician or man should tell a woman what she can and cannot do with her body.”

French President Emmanuel Macron tweeted in the hours after the ruling that “abortion is a fundamental right for all women.”

“I wish to express my solidarity with the women whose liberties are being undermined by the Supreme Court of the United States,” Macron wrote.

Biden has forcefully condemned the Court’s decision and has pledged to use the federal government to protect the ability of women to choose. But there was little under the purview of his executive powers to help millions of American women.

The decision on abortion came just days after Biden also forcefully denounced the Supreme Court’s ruling that dramatically weakened gun control measures. The rulings, driven by justices appointed by Republican presidents who lost the popular vote, added to the sense of powerlessness around Biden, who has suffered setbacks on voting rights and climate change and has seen his poll numbers pummeled by rising inflation.

The difference from last year’s G-7, held on the rocky English coast, was stark.

Twelve months ago, Biden enjoyed strong public support after overseeing the distribution of Covid relief and vaccines, and was greeted by his peers at the G-7 as a return to normalcy after four turbulent years of former President Donald Trump. Even before Russia’s invasion, he pushed the other leaders to demonstrate that democracies could still deliver for their citizens.

But a series of domestic challenges have laid Biden low, particularly inflation that has soared to 40-year highs.

Though Democrats are hopeful that anger at the Supreme Court could boost voter enthusiasm, many in the party fear that rising costs will lead to a wipeout at this November’s midterm elections. The world leaders on Sunday noted that inflation is a global problem, exacerbated by Putin’s invasion, which has led to significant energy and food insecurity across the world.

The West has unleashed a punishing array of sanctions against Russia and rendered Putin a pariah on the world stage. The ban on Russian gold, to be announced officially Tuesday, could amount to a penalty of tens of billions of dollars on Moscow’s second-largest export.

One aim will be to prevent Russia — which has dodged the impact of previous sanctions — from getting around the new ban. White House officials on Sunday suggested that additional sanctions could be announced, but it was not clear if they would come this week.

Much to Moscow’s fury, a move to expand NATO to include Sweden and Finland is poised to dominate the alliance’s summit in Madrid, which is to be held later this week. Though Turkey has registered objections to the expansion, others in the alliance look to move swiftly.

But there are signs of growing tension between the European allies as the limits placed on Russian energy imports have strained the region’s economies. Fearing they could be Putin’s next target, the smaller Baltic states near the front lines have pushed for unwavering resistance, while some of the larger Western European economies have begun nudging Kyiv to consider a negotiated settlement.

Biden aims to push the allies past any reluctance this week amid Russia’s grinding progress in Ukraine’s eastern Donbas region. Russia has inflicted heavy losses on Ukrainian forces and on Sunday launched its first air strikes on Kyiv in weeks — just as the world leaders began to gather about 1,100 miles away in Germany.

Biden on Sunday declared the strike more of Russia’s “barbarism.” Later, some of the other world leaders took a lighter tone, with Johnson asking if the men should take their jackets off “to show that we’re tougher than Putin.” That prompted Trudeau to joke they should have a “bare-chested horseback riding display,” a nod to an infamous old photo of the Russian leader.

In light of escalating violence, Ukrainian President Volodymyr Zelenskyy was set to use his virtual G-7 address on Monday to urge the West to send more weapons to the front.

Biden has received high marks — even from some Republicans — on his management of the war, but White House aides have resigned themselves to the reality it likely will not change a single vote this fall, as the election seems certain to be dominated by inflation and other issues. Instead, they’re moving to prevent domestic public opinion from souring on the war and hampering Biden’s ability to execute his preferred approach to it.

Russia wasn’t the only global rival to receive attention from the world leaders gathered under sunny skies in the Alps — but the other nation wasn’t named.

The leaders looked to kick-start a new $600 billion global infrastructure program — to replace one a year ago that never got off the ground — meant to compete with China’s “Belt and Road” initiative to build projects in the developing world. Biden said if the democracies worked together, they would be “offering better options for people around the world.”

But even then, Biden couldn’t escape the shadow of the Supreme Court. After the announcement of the program, the president stepped off the stage, chatting with his peers, when a reporter shouted a question not about infrastructure — but whether the other leaders had followed their public remarks by privately raising the abortion ruling with him.

Biden ignored the inquiry and stared straight ahead.