Welcome back! Hilarious snaps reveal the VERY strange sights people have returned home to – from a snake in the kitchen to brutal break-up notes

Most of us don’t expect things to change significantly while we’re out of the house – but these snaps prove a lot can happen in a short period of time.

Shareably rounded up a selection of hilarious photographs that capture the strange objects and creatures people from around the world have returned home to, revealing pets and spouses can be very mischievous.

One person got the fright of their life after walking over to their sink to wash up, only to find a snake having a relaxing bath in the water instead.

Elsewhere, a man came home to a note written on toilet tissue saying: ‘Call me when you get your s*** together.’

Here, Femail reveals some of the random occurrences that will make you extra vigilant when you return home… 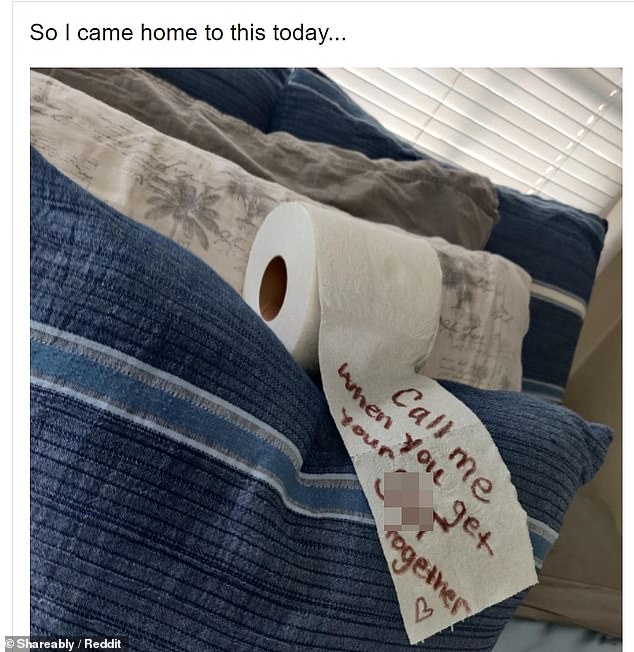 Ouch! Elsewhere, a man, whose location is unknown, bizarrely came home to a note written in brown pen on toilet tissue from his partner 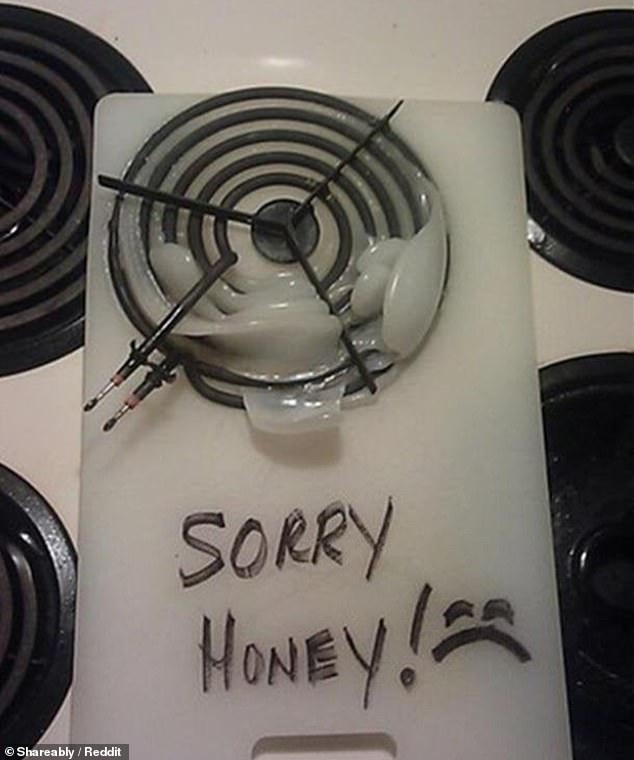 One extremely apologetic person left a note for their partner saying ‘sorry honey!’ after they accidentally melted a plastic chopping board into their stove ring – fusing the two together 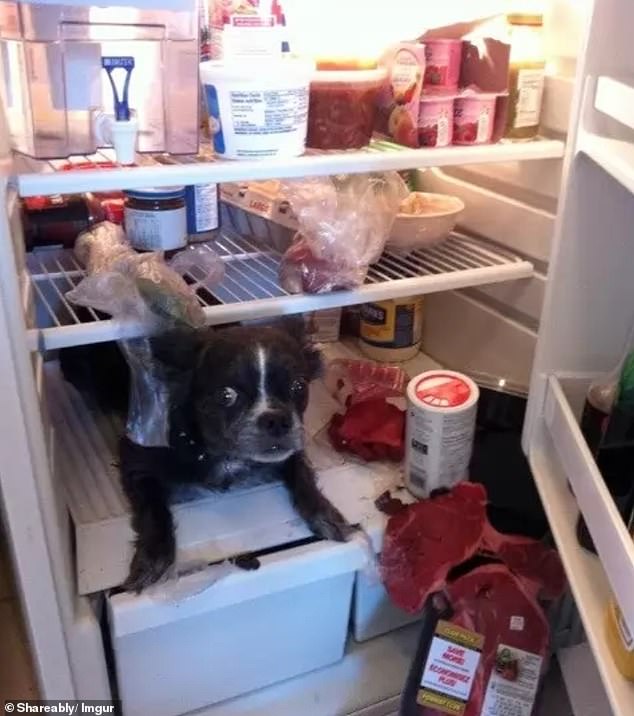 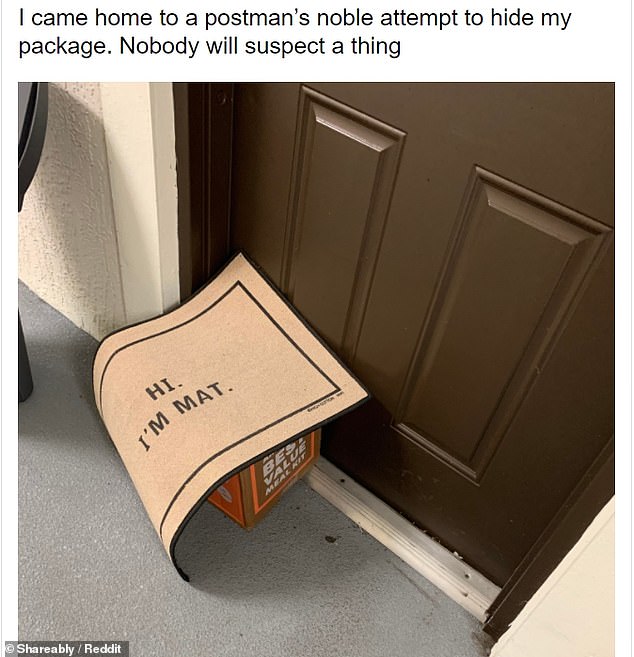 One postman, whose location is unknown, proved he needed to brush up on his talents at hiding parcels after one person came home to find their mat less than skillfully placed on their parcel 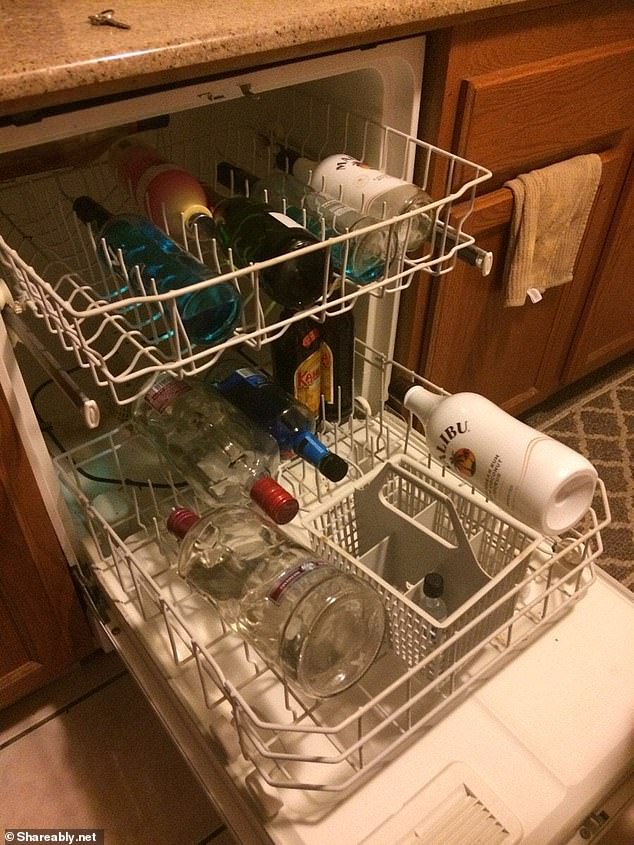 They’ll never find my stash! In one household where nobody ever uses the dishwasher, a clever room mate found the perfect spot for storing booze 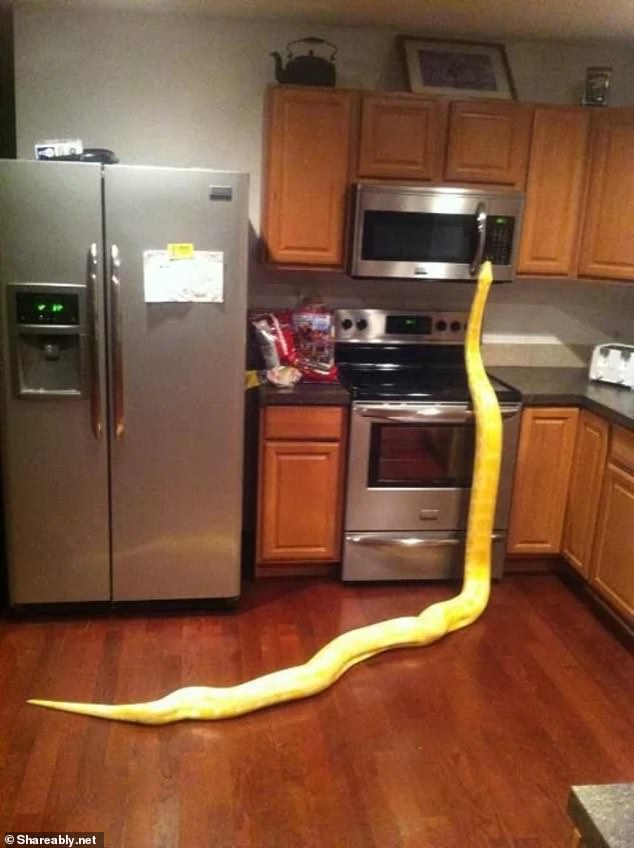 Snakes and ladders! One homeowner got a huge shock to find an escaped exotic in the kitchen checking out the microwave 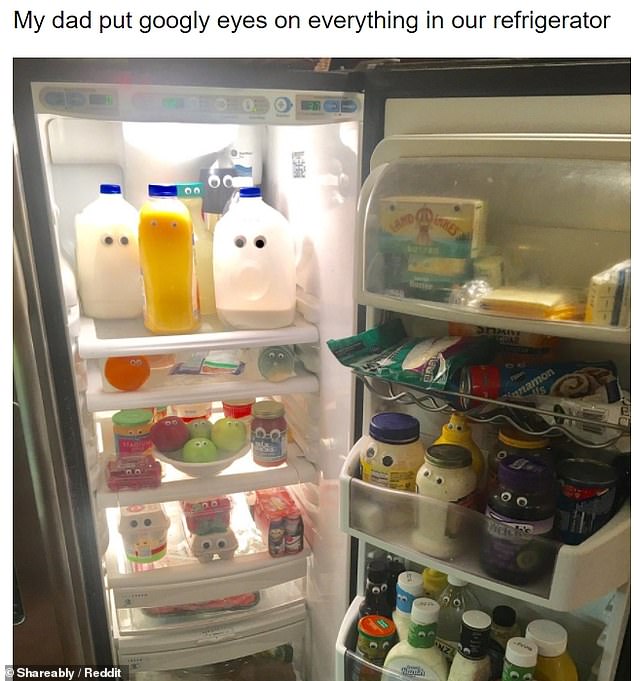 One child, whose location is unknown, was left in stitches after opening their fridge for a quick snack, only to discover that their father had put goggly eyes on everything 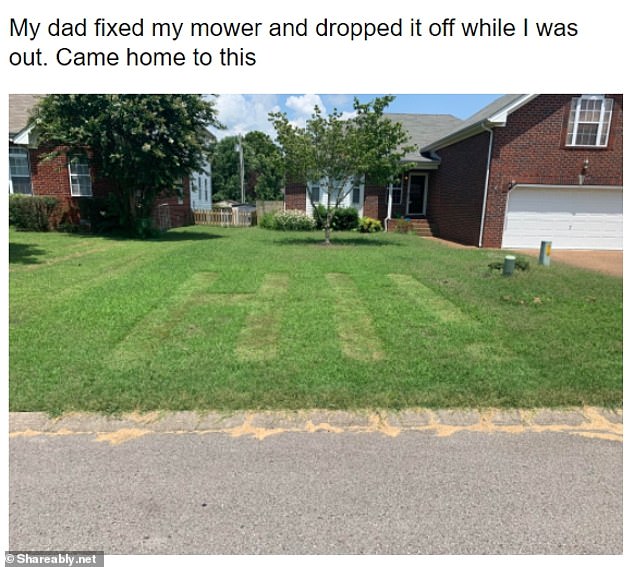 Thanks for nothing, Dad! This probably wasn’t what a daughter had in mind when her father said he’d cut the grass for her 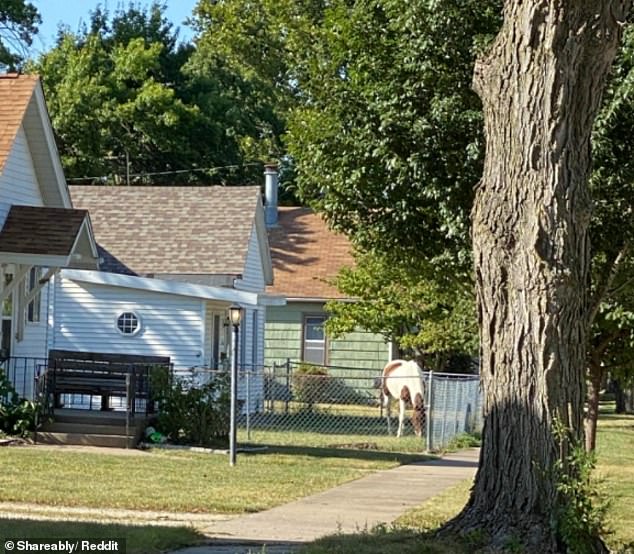 Shareably rounded up hilarious photos of strange things people have returned home to -including an individual believed to be in the U.S, who spotted a horse in their neighbour’s front garden 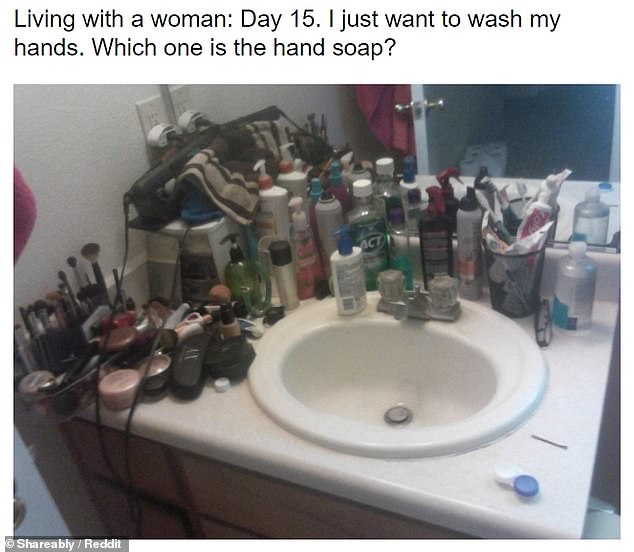 This is my side of the vanity! One man, whose location is unknown, was left taken aback after his partner had completely taken over their sink with her various make-up and beauty supplies 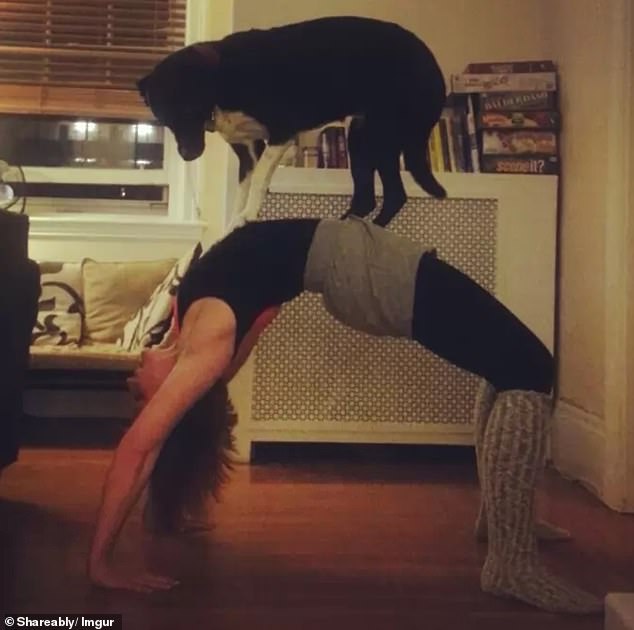 One man, whose location is unknown, was left shocked when he discovered that his wife had got their dog involved in her yoga session 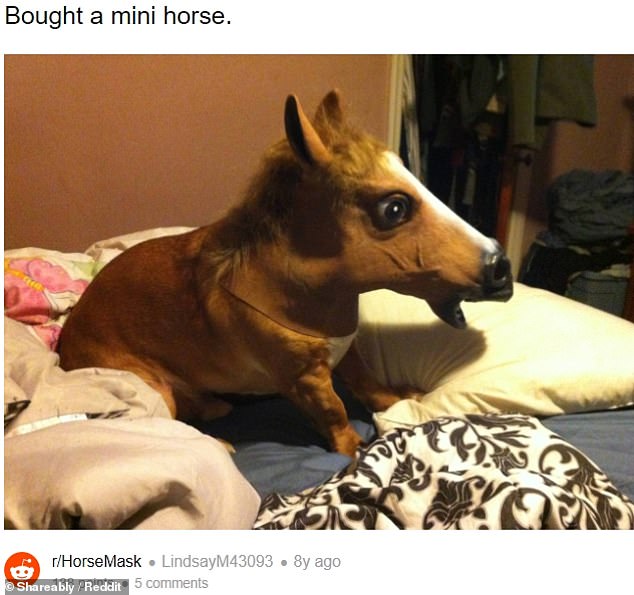 Dogs are known to do some bizarre things, but this pet left its owners baffled after it managed to get its head inside a horse mask, creepily resembling a ‘mini pony’ 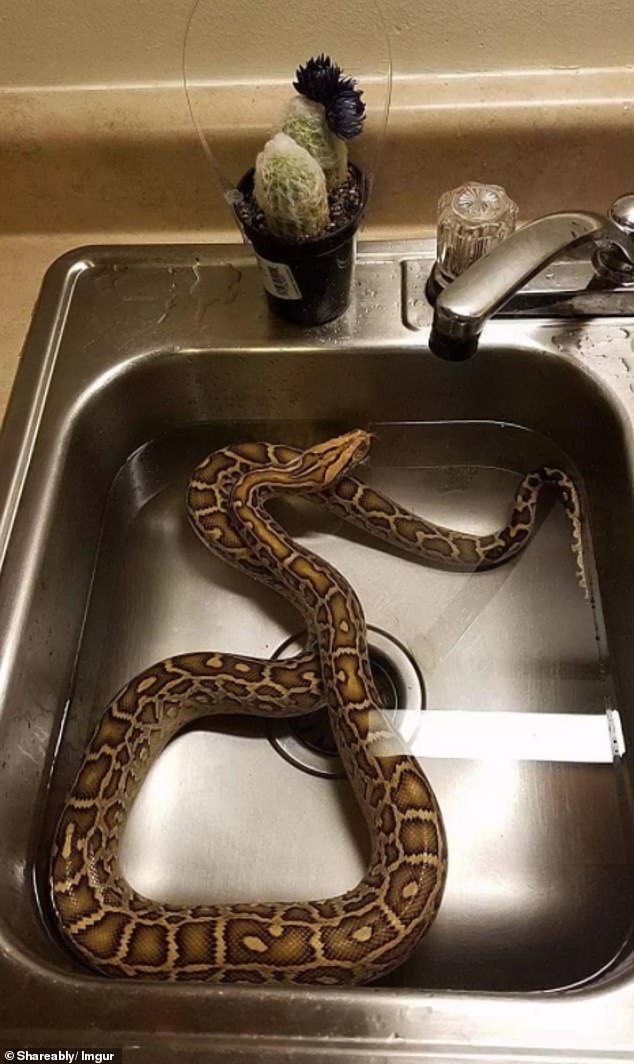 Sssssscary! This person must have had the fright of their life after walking over to their sink to wash up, only to find a snake having a relaxing bath in the water instead 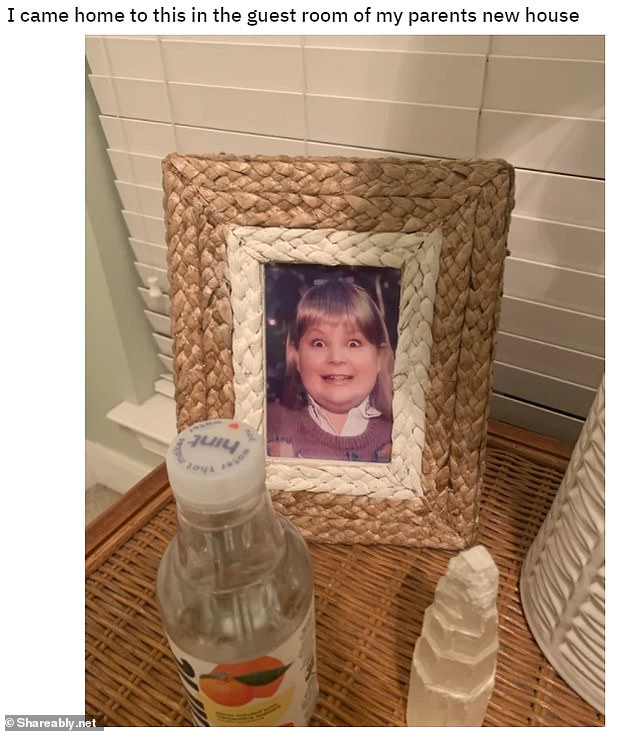 Getting out the family album is one thing, but framing one of your embarassing photos for all to see in the guest room is quite another

Britain’s coronavirus R rate is BELOW one and now at 0.9, Covid Symptom Study claims

Woman who sprayed her hair with Gorilla Glue finally has it removed during $12,500 procedure

EXC: Chloe Inexperienced enjoys day at sea along with her boyfriend Manuele Thiella

‘It simply slips proper out’: use a MICROWAVE to peel your messy garlic cloves with ease

Republican congressman Jim Jordan has admitted he spoke with Donald Trump on January 6 but refused...

Two out of 5 Aussies Will Purchase Crypto: Survey 2021

EXC: Chloe Inexperienced enjoys day at sea along with her boyfriend Manuele Thiella