The model, 22, spoke candidly about how her partner competing on the show has impacted their life, adding that they now enjoy quiet nights in watching TV.

Ella also said that Nicola, 37, is a big fan of her ‘sexy dresses’, such as the racy semi-sheer one she recently wore to Proud Embankment in London.

Discussing how Nicola taking part in Strictly, where she is paired with professional Katya Jones, has hit their sex life, Ella revealed there’s been some changes. 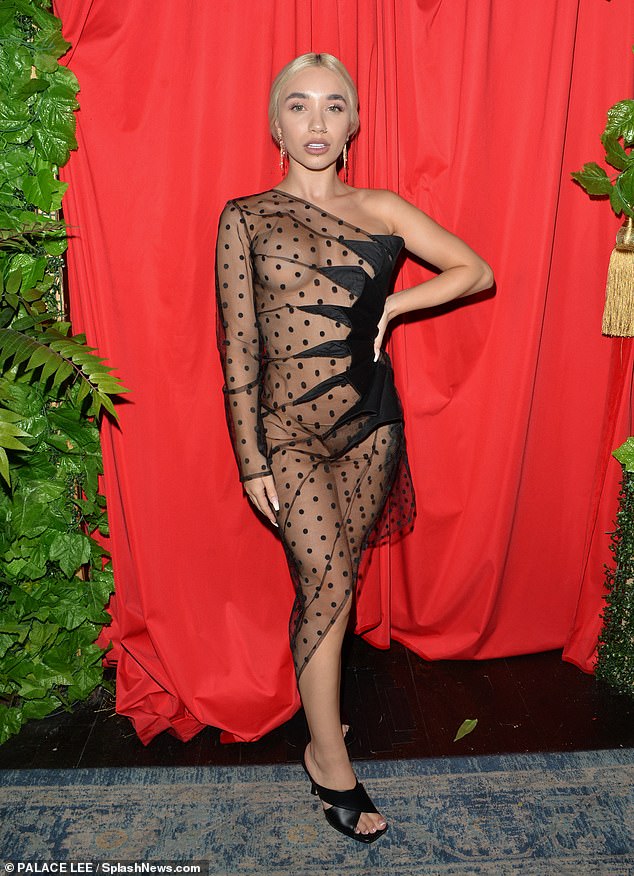 She told The Sun: ‘We’re too tired! We’re just watching a lot of Netflix and taking advantage of Deliveroo.

‘Nicola is putting in such gruelling hours. She’s exhausted by the time she comes home.’

Ahead of Saturday’s first live show,  athlete Nicola and Katya are training for 10 to 12 hours a day to ensure their Quickstep to Get Happy by Ella Fitzgerald is perfect.

Ella also revealed that, although her racy ensembles may raise some eyebrows, she has the full support of her partner when it comes to wearing the daring clothes. 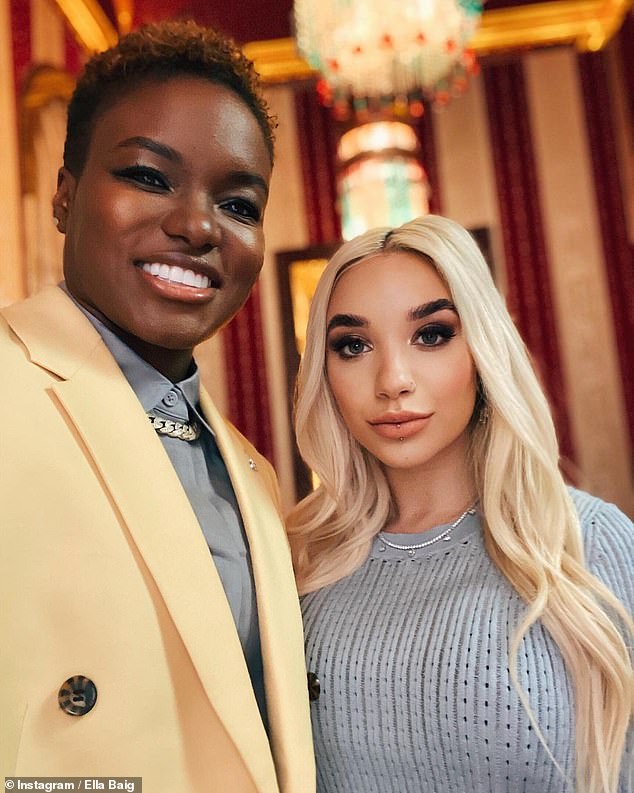 Couple: Talking about their sex life since Nicola joined the show, Ella said: ‘We’re too tired! We’re just watching a lot of Netflix and taking advantage of Deliveroo’

She said: ‘Nicola loves my sexy dresses, even the see-through ones… if I’m feeling happy and confident in something, she’s all for it.

Adding that she’s a fan of testing the limits, Ella said she knew their recent visit to Proud Embankment in London was the ‘perfect’ time to see how far she could go.

The blonde beauty donned a very racy black mesh dress for the outing, which boasted a polka-dot pattern over it and gave the illusion Ella was naked.

Nicola has the full support of her girlfriend as she heads into the live show stage of Strictly this Saturday night. 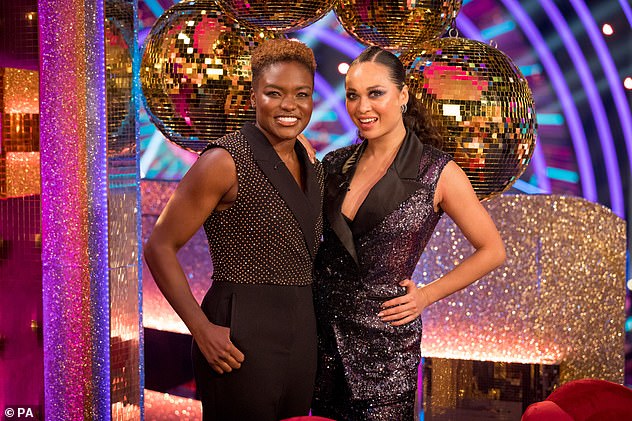 ‘Dancing is dancing’: Katya, 31, said she believes she and Nicola will be ‘a powerhouse together’ as they’re both ‘strong-minded women’ in a chat with the Radio Times

The couple, who bought a house together in Leeds after dating for just one-year, met in 2018 while on a night out.

Ella explained that she had recently finished studying at university in the city and was completely unaware of who Nicola was at the time.

She recalled how she had drunkenly asked a pal who the pro boxer was when other people started to take pictures.

After telling her friend that she didn’t at first think Nicola was attractive, the pair started to talk and soon hit it off as they started to date.

It comes after Nicola laughed off any worries of the so-called Strictly Curse, with the Olympian telling Grazia magazine that the curse doesn’t actually exist. 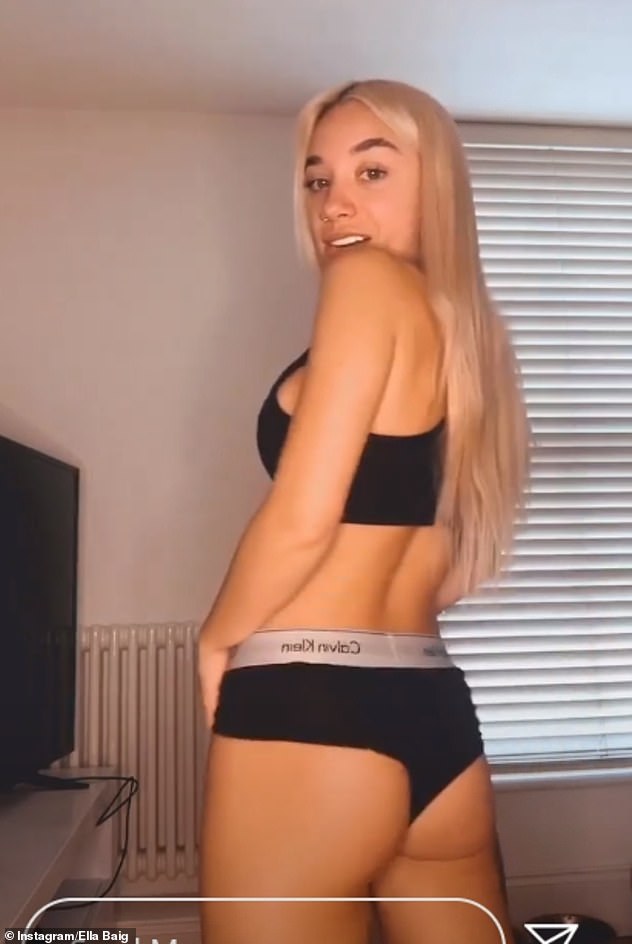 Love: After the launch show, Nicola’s girlfriend Ella said she doesn’t think they’ll be hit by the ‘Strictly Curse’ 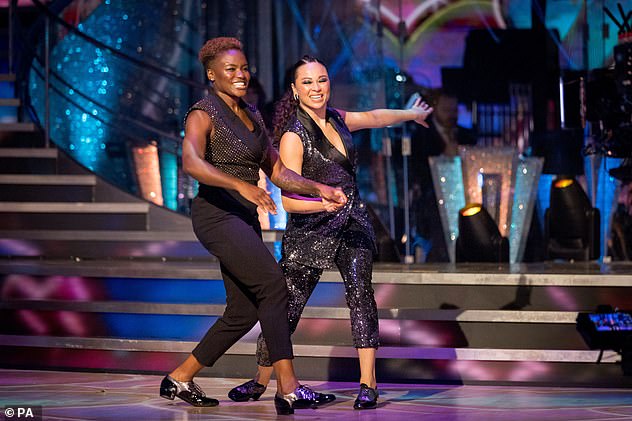 Confident: The professional dancer said she thinks the duo will be ‘a powerhouse together’ as they’re both ‘strong-minded women’ (pictured dancing during Saturday’s launch show)

‘It’s not a big deal. It’s not even a curse. You’re either happy with your partner or you’re not!’ she insisted.

The Strictly curse has been speculated about for years, after celebs and pro dancers on the series have fallen for one another, ruining their relationships – and even marriages – in the real world.

The couple is typically torn apart by time-related issues or one partner’s attraction to another person on the show, which in the past has led to divorces, breakups, called-off engagements and more.

Katya is no stranger to this idea, as she was caught kissing her dance partner Seann Walsh in 2018 when she was married to fellow pro Neil Jones, 38. The couple split 10 months after the scandal. 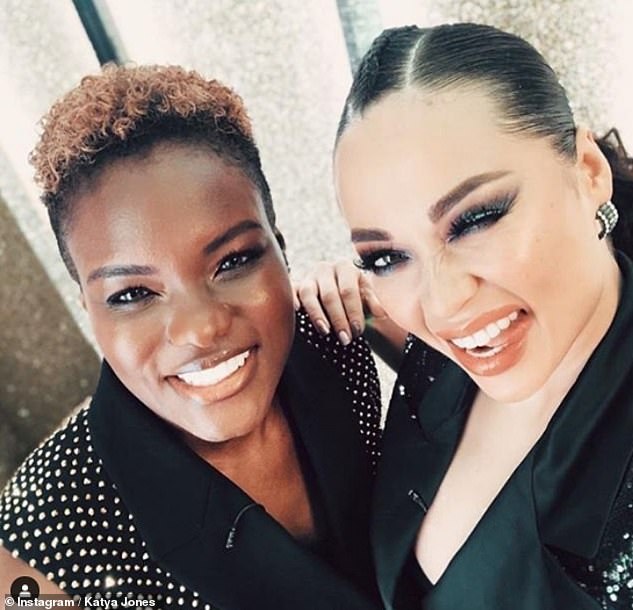 Dance partners: Katya also took to Instagram on Monday to reveal she and Nicola are using the team name ‘team outside the box’ alongside a sizzling selfie of them together

In a previous chat with The Sun, Nicola remarked that Katya is ‘smoking hot’ but echoed her sentiments that she and Ella ‘are so strong we will never be a victim of the Strictly Curse’.

Ella also added: ‘I’m not worried about the curse. Nicki and me are best friends so I don’t really see anyone as competition and she doesn’t either.

‘The grass is never greener on the other side and me and Nicki have a lot of history together, so I don’t think anyone is going to steal her off me.

‘We did have a conversation about the curse and we agreed I would meet her dance partner so there are no hard feelings or jealousy there.’

Katya, 31, also spoke about her partner, in a chat with the Radio Times. She praised Nicola and added that she thinks the duo will be ‘a powerhouse together’ as they’re both ‘strong-minded women’. 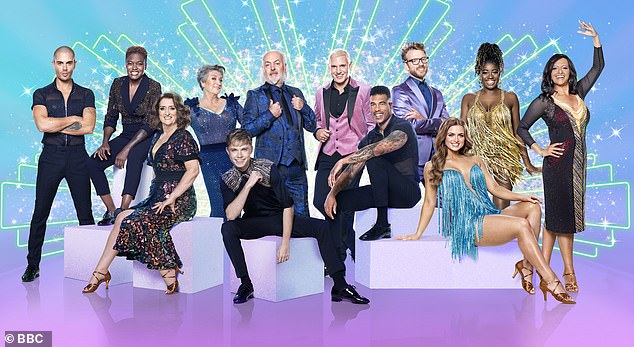 Greening the grey: London to turn 50% of its urban environment green by 2050