‘Billy Ocean should be the one going home!’ Strictly viewers cringe as singing legend appears off-key while performing a medley on results show

By Andrew Bullock For Mailonline

The legendary crooner, 70, performed a medley of his hits, but sounded a tad off-key – which didn’t go unnoticed.

‘Oh dear… Billy Ocean on Strictly – sounds like me after a few gins!’ one person posted on Twitter. 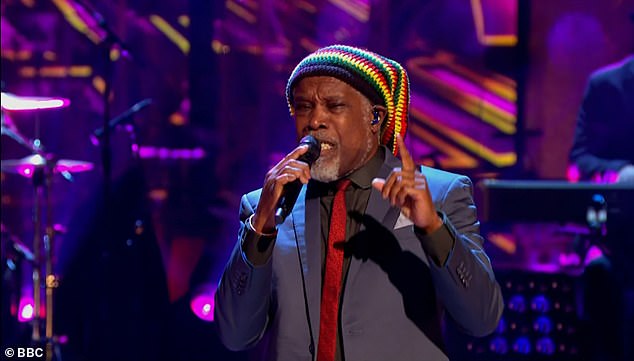 Another quipped: ‘Billy Ocean should be the one going home #awful!’

‘I feel like perhaps Billy Ocean’s in-ears aren’t working,’ someone else remarked.

‘A bit pitchy!’ another tweeted, followed by someone else who typed: ‘Is this a Billy Ocean tribute act? Am I watching Phoenix Nights?’

‘My Big Billy Ocean Bae is struggling a bit here,’ someone else posted.

Followed by: ‘Billy Ocean being badly out of tune on Strictly Come Dancing, is breaking my heart.’

Others didn’t seem to mind however.

‘Billy Ocean on #Strictly! Damn, 2020 suddenly doesn’t seem too bad. Can’t beat a bit of 80s pop, we all know it was the best music decade!’ one tweeted.

‘Billy Ocean singing Red Light Spells Danger on Strictly is all anyone needs on a Sunday evening!’ gushed a second.

The performance preceded the results announcement, which saw Caroline Quentin booted from the show.

The 60-year-old actress became the fourth celebrity to be sent home from the BBC competition, after she and her professional partner Johannes Radebe failed to impress the judging panel and the voting public with their Cha Cha.

Caroline and Johannes lost out to EastEnders star Maisie Smith and her partner Gorka Márquez, who found themselves in the bottom two for the second week in a row, despite wowing the judges with their Salsa routine.

All three judges – Craig Revel Horwood, Shirley Ballas, and Anton Du Beke, who was standing in for Motsi Mabuse – chose to save Maisie and Gorka.

After the result was announced, Caroline was asked if she had fulfilled her childhood dream of becoming a dancer, and she said: ‘Yeah in a way slightly more than that.

‘I have had the honour and privilege of working with some of the greatest dancers this country has ever known I mean I really believe it, I think they are absolutely fantastic.

‘But of course my greatest gift coming on this show is this man.’

The conservative currents are full of fanaticism, repression and hatred towards that different world that goes out of its guidelines. Watch over life, yes, but only when your...

(Trends Wide) -- Authorities found 44 migrants dead inside a truck in San Antonio, Texas, according to City Councilwoman Adriana Rocha Garcia, who says she was told about...