Suarez: Koeman treated me with contempt and Bartomeu leaked that I was a bad character in the dressing room 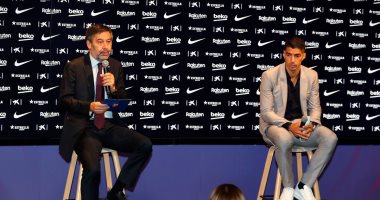 Atletico Madrid striker Luis Suarez confirmed that Barcelona coach Ronaldo Koeman treated him with contempt as if he was a 15-year-old boy, adding that Bartomeu had leaked to him that he was a harmful figure in the dressing room.

Barcelona is preparing to face Atletico Madrid on Saturday in the eighth round of the Spanish League, amid speculation that the match will be the last chance for Dutchman Ronald Koeman.

Luis Suarez revealed in an interview with the Spanish newspaper “Sport” that he felt treated like a 15-year-old by the Barcelona coach after he bid farewell or someone in charge of hairdressing and clothing..

Luis Suarez told the newspaper: “Koman treated me with contempt as if I were a 15-year-old boy, and Bartomeu leaked that I was a bad character in the dressing room.”

Atletico Madrid striker Luis Suarez added: “In Barcelona, ​​there is a war that harms the players.““.

Suarez continued by saying: “Leo Messi told me he wanted to end his career at Barcelona and that made him happy, I wouldn’t celebrate if I scored against Barca.”

Tips to get rid of autumn depression.. exposure to the sun in the morning and a good sleep with healthy food