Summary and goals of Poland’s match against England in the World Cup qualifiers.. Video 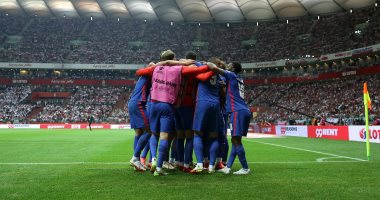 Poland managed to achieve a 1-1 draw with its guest England, in the match that brought the two teams together, on Wednesday evening, at the “Slaskie International Stadium”, as part of the sixth round of Group I in the European qualifiers for the 2022 World Cup..

Harry Kane scored the England national team goal in the 72nd minute with a superb shot from outside the penalty area, which landed to the left of Juventus goalkeeper Chesney.

Kane raised his score to 41 international goals with the England national team, to be ranked fifth in the historical top scorer, with a goal difference from Michael Owen..

In the second minute of stoppage time, Damien Szymanski scored the equalizer for Poland with an assist from Robert Lewandowski..

The end of the first half witnessed a strong argument between the players of the two teams, specifically between the duo Harry Maguire and Kamil Celik, which led to the referee revealing the yellow card in the face of both players..

With this result, the England team maintains the lead in Group I with 16 points, while the Polish team slipped to third place with 11 points, one point behind the runner-up Albania.

The England national team entered the match with the following formation.

The benefits of cloves.. It will strengthen your immunity and protect your bones and is useful for diabetics