Summary and goals of the Chelsea match against Aston Villa in the English Premier League.. Video 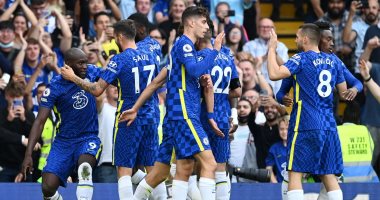 The Chelsea team regained the tone of victories in the Premier League again, after it achieved an easy victory over its guest Aston Villa, with three goals for free, in the confrontation that took place between them this evening, Saturday, at “Stamford Bridge”, in the fourth round of the English Premier League competition. For the current season 2021-2022.

Summary and goals of the Chelsea match against Aston Villa

With this result, Chelsea occupies second place in the English Premier League table with 10 points, with a goal difference only from Manchester United, the leader, with the same balance of points, after they swept Newcastle United 4-1 earlier today, while Aston Villa’s balance froze at 4 points in the center. fourteenth.

The Chelsea team managed to escape the trap of defeat at the hands of Liverpool and tied with them with a goal each at Anfield in the last round, to return again to the winning streak today.

And he was absent from participating with Aston Villa, the Egyptian international Mahmoud Hassan Trezeguet, as the date of his return to participate in the team’s team training, and therefore participation in the matches, has not been set.