Summary and goals of the Paris Saint-Germain match against Clermont in the French League.. Video 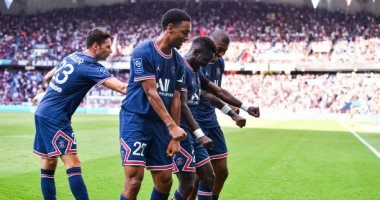 Paris Saint-Germain scored a 4-0 victory over Clermont-Foot, during the match that brought the two teams together, on Saturday evening, at the Parc des Princes, in the fifth round of the French League.

NSThe French giants made 2-0 in the first half, and Paris’s double came through Spanish midfielder Ander Herrera in the 20th and 31st minutes.

In the second half, Paris added two more goals through young star Kylian Mbappe and midfielder Idrissa Gaye in the 55th and 65th minutes, respectively, to end the match with a clean four in favor of Paris.

With this result, Paris Saint-Germain reached 15 points at the top of the French League standings, while Clermont is in third place with 8 points.

Argentine star Lionel Messi and Brazilian Neymar are the most prominent absentees from today’s match against Clermont, in addition to Angel Di Maria, defender Marquinhos and midfielder Leonardo Paredes.

And the absence of the newcomer this summer, Spanish defender Sergio Ramos, from the ranks of Paris Saint-Germain, as he continues to recover from the injury that prevented him from participating in matches since the beginning of the season..

Thus, Messi’s first appearance in front of his fans at the “Park of the Princes” is postponed, after the Argentine star participated in his first 25 minutes of the French League at Reims Stadium on August 29 last in the last round.

Also missing from today’s match was Portuguese left-back Nuno Mendes, who was signed to support this position at Paris Saint-Germain..