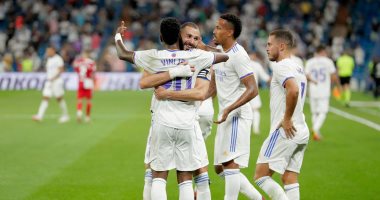 Real Madrid swept its guest, Celta Vigo, 5-2, in the exciting match that brought the two teams together on Sunday evening, at the “Santiago Bernabeu”, where the royal team returns to play after an absence of 560 days, due to comprehensive renovations, in the fourth round of the league competition. Spain’s La Liga.

Real against Celta Vigo.. Ancelotti: We played a great match worthy of returning to the Bernabeu

After scoring a hat-trick, Benzema breaks into the list of the top 10 scorers in the history of La Liga

After scoring a hat-trick, Benzema breaks into the list of the top 10 scorers in the history of La Liga