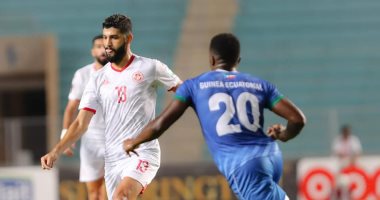 The first group also includes Zambia and Mauritania, and the Zambia team won 2-1 away to Mauritania earlier.

The first half ended in a goalless draw, as Tunisia posed a threat to the goal of Equatorial Guinea, in the first half, especially from the left side through Ali Maaloul, but without translating them into goals, in light of the good defense of the opposing team.

Midfielder Elias Skhiri scored Tunisia’s second goal in the 78th minute with a powerful shot from outside the penalty area, before Wahbi Khazri concluded the Carthage Eagles’ goals in the 83rd minute with a penalty kick.

At the head of the formation of the Tunisian national team in today’s match, Ali Maaloul, the back of Al-Ahly, and Fakhr El-Din Ben Youssef, the Ismaili striker, in addition to Ferjani Sassi, the former player of Zamalek and the current Qatari Al-Duhail, while he participated as two substitutes in the second half of the Zamalek duo Hamza Mathlouthi in the 46th minute and Seif El-Din Al-Jaziri in the minute 68 who participated instead of Ben Youssef.

In the next round, Tunisia will host Zambia next Tuesday, while Equatorial Guinea will host Mauritania on the same day..