Boris Johnson has hailed a ‘big day’ after voting in the dramatic Super Thursday battle – amid signs he is on course to take a wrecking ball to the Red Wall again.

The PM cast his ballot along with fiancee Carrie Symonds at Methodist Hall in central London as the crucial set of elections got underway.

In a video shared on social media afterwards he said: ‘It’s a very big day at the polls today. I hope everybody will go out and vote.’

The Tories have been boosted by a final poll showing they have a huge 10-percentage point lead – driven by the success of the vaccine rollout.

Keir Starmer is braced for a disastrous ‘hat-trick’ of defeats in the Hartlepool by-election, as well as the two key mayoral races in the West Midlands and Tees Valley.

Allies believe a hard-Left challenge is inevitable if the results in his first major electoral test are as bad as feared – but they are also confident he can survive.

Sir Keir voted at Greenwood Centre in Kentish Town this morning accompanied by his wife Victoria. Asked by reporters how he was feeling about the contest, he said: ‘Good.’

Votes will be cast in every part of Great Britain, with the Scottish and Welsh Parliaments, London Assembly, and Hartlepool by-election up for grabs.

More than 5,000 council seats in England will also be contested, along with 13 mayoralties and 39 police and crime commissioner positions.

YouGov’s final poll before the big day found the Tories were on 43 per cent nationally, ahead of Labour on 33 per cent.

The research, conducted over the past two days, found 40 per cent had a favourable view of Mr Johnson, compared to just 31 per cent for Sir Keir Starmer.

Importantly more than nine in ten voters thought the government handled the coronavirus vaccination programme well, with just over half of those credited the success to Boris Johnson. 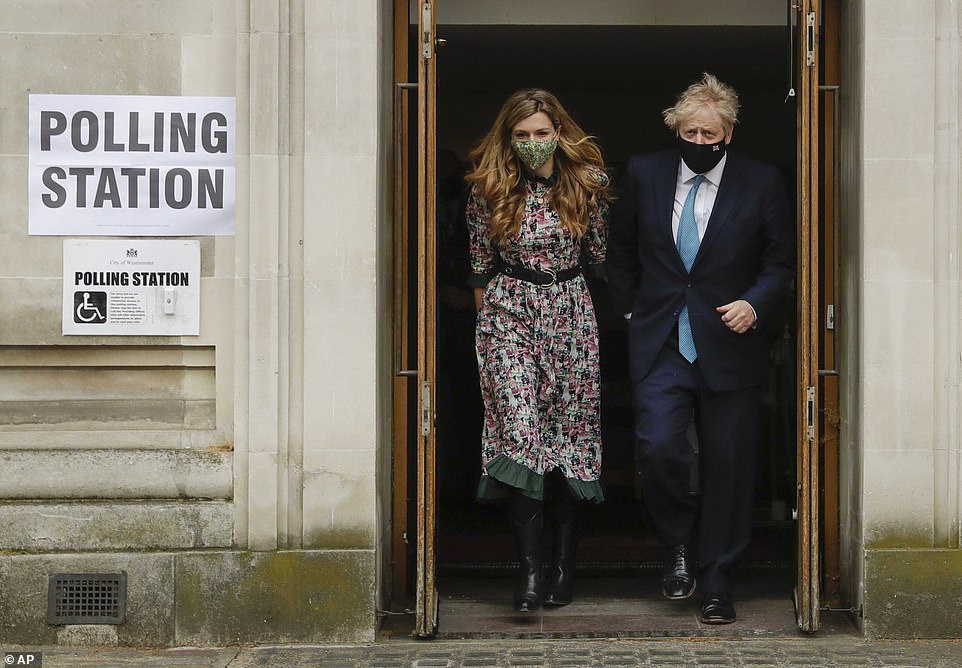 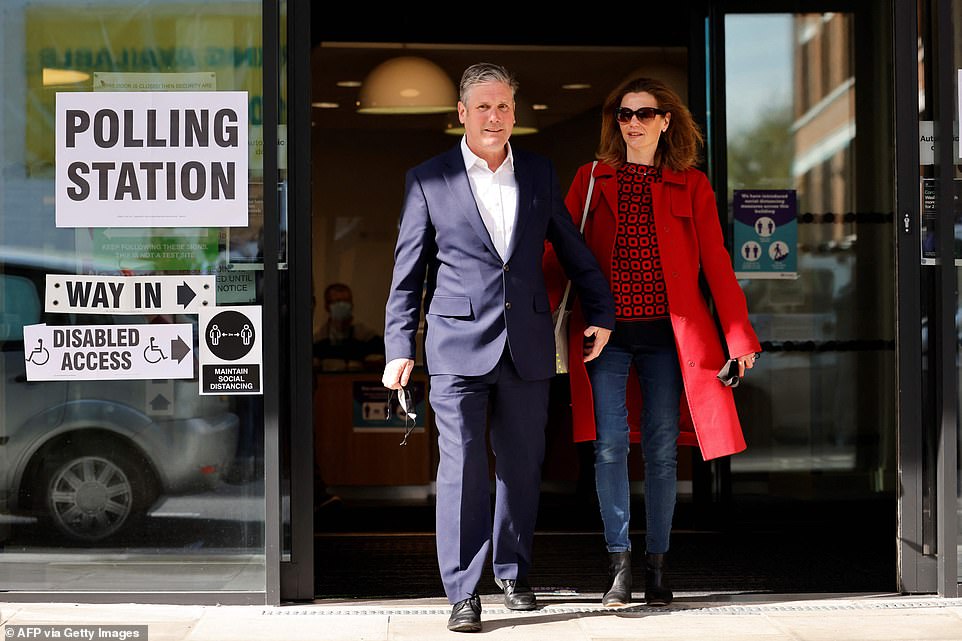 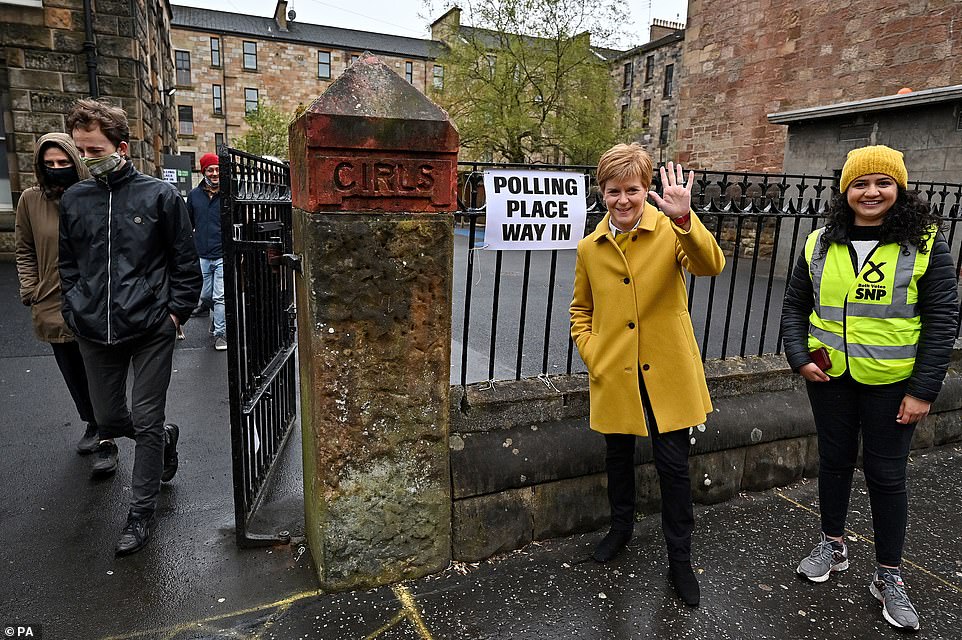 First Minister Nicola Sturgeon outside the polling station at the Annette Street school in Govanhill, Glasgow, this morning 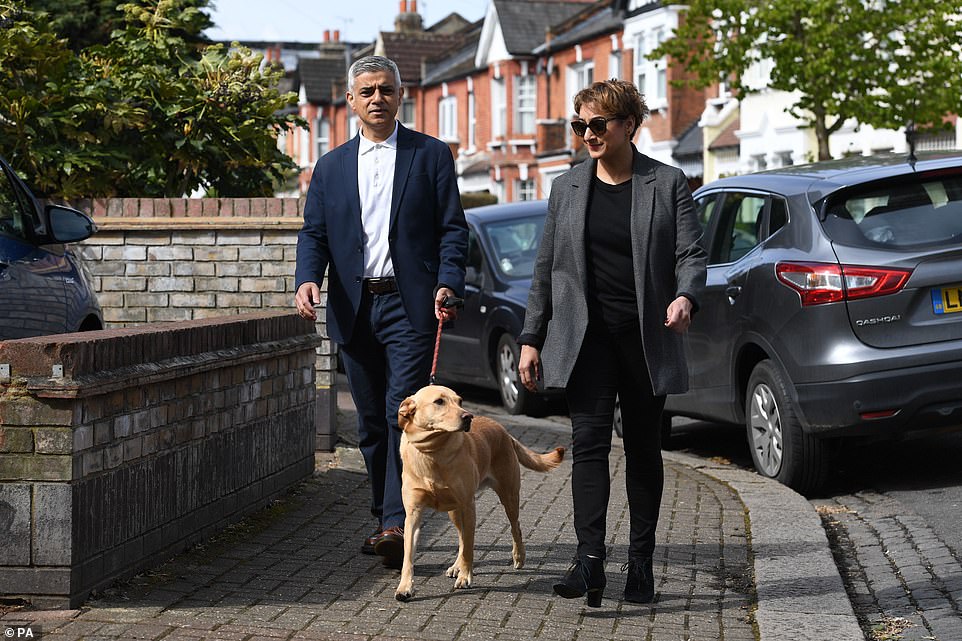 Sadiq Khan accompanies his wife, Saadiya, and his dog Luna to the polling station at St Albans Church in South London today 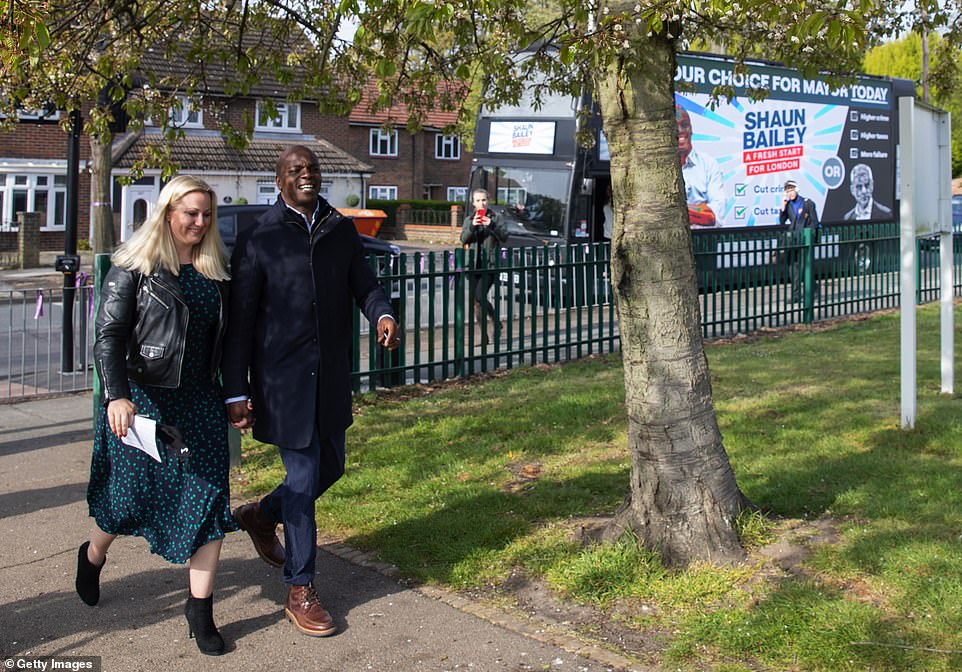 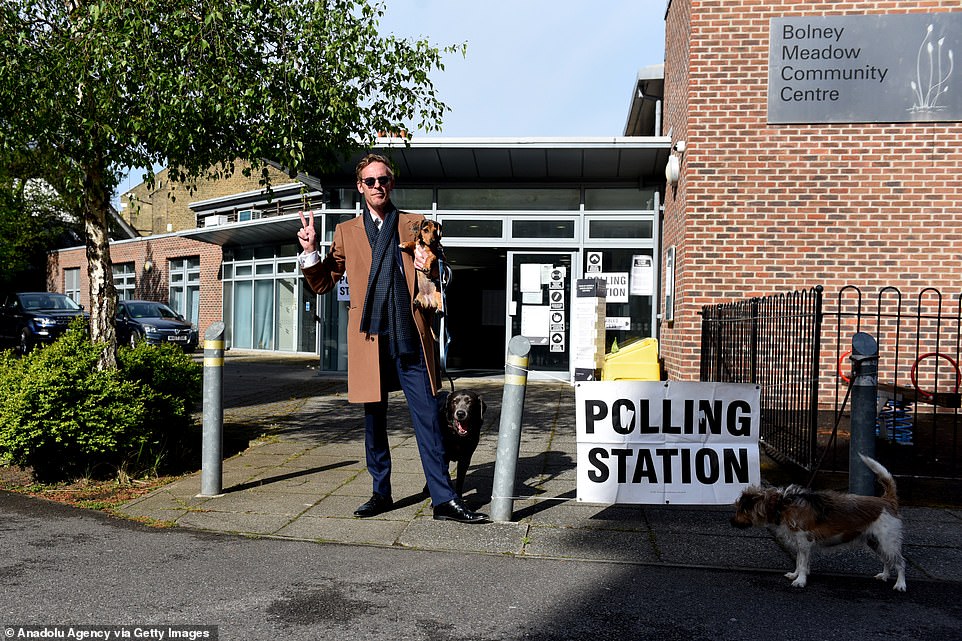 Laurence Fox arrives at a polling station in Vauxhall, London, with his dogs Blaze, Sparky and Mrs Thatcher to vote today 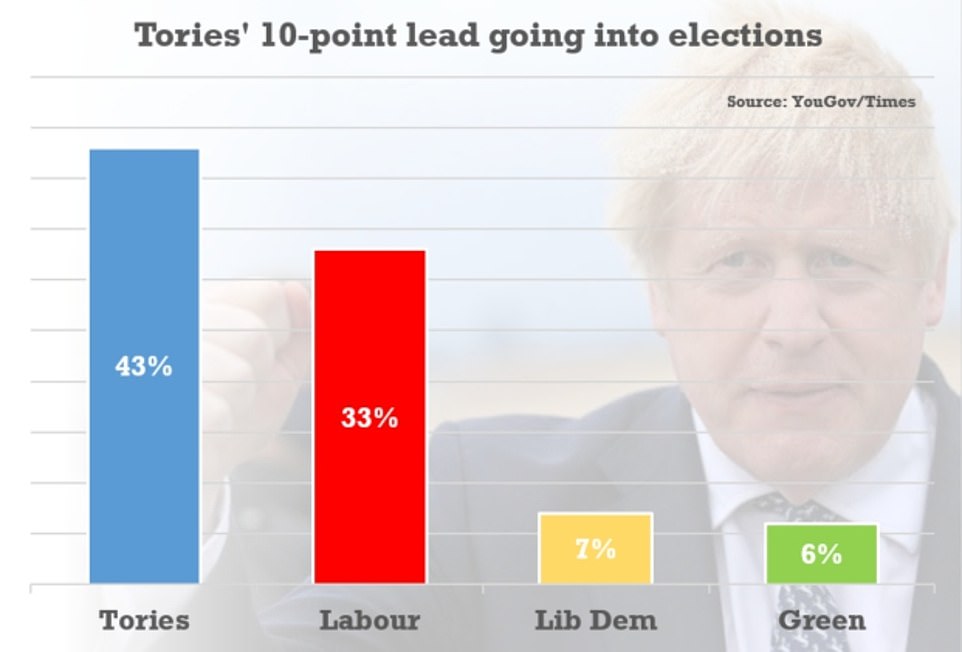 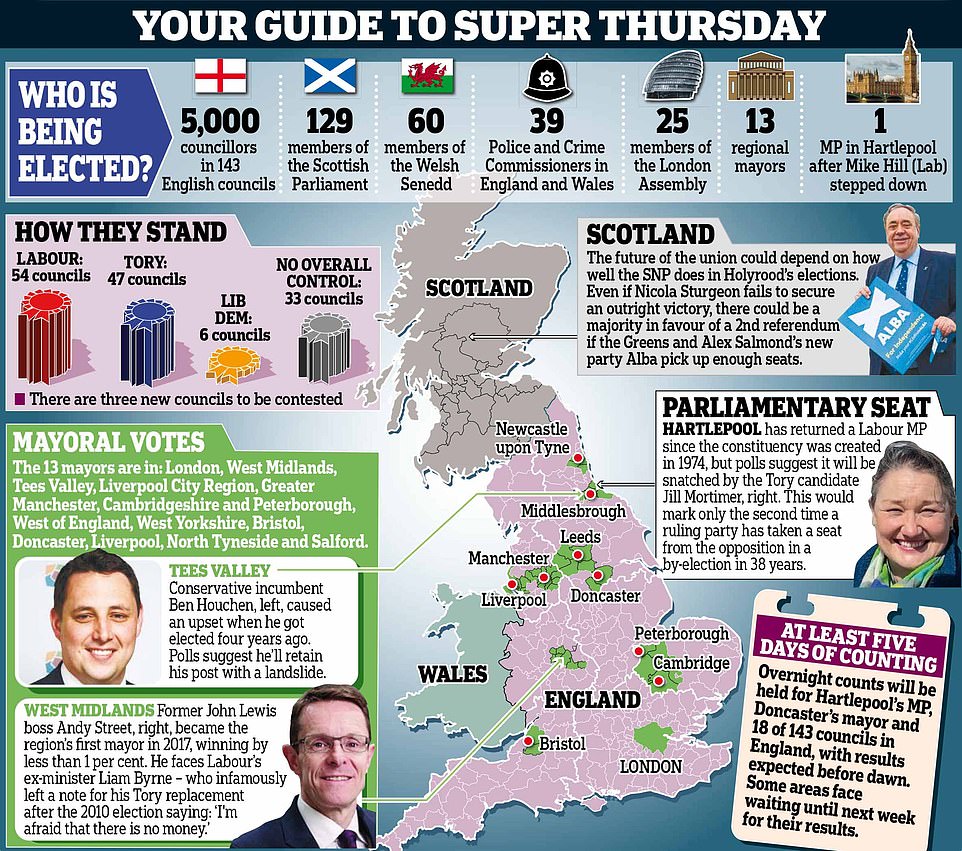 Other polls have suggested that the race has been narrowing amid the ‘wallpapergate’ and lobbying rows.

But a bombshell Survation poll for ITV’s Good Morning Britain this week found that the Conservatives are 17 points clear in the pivotal Hartlepool contest – a seat that Labour has held ever since it was created.

A Tory win in Hartlepool would be only the second time in 38 years that the Government has snatched a seat from the Opposition in a by-election.

Lord Mandelson yesterday said he will ‘go into a meltdown’ if the constituency, where he was MP from 1992 to 2004, turns blue for the first time in its 47-year history.

Sir Keir last night pledged to ‘carry the can’ if Labour fares badly at the ballot box, but insisted his focus is on ‘winning the next General Election’. 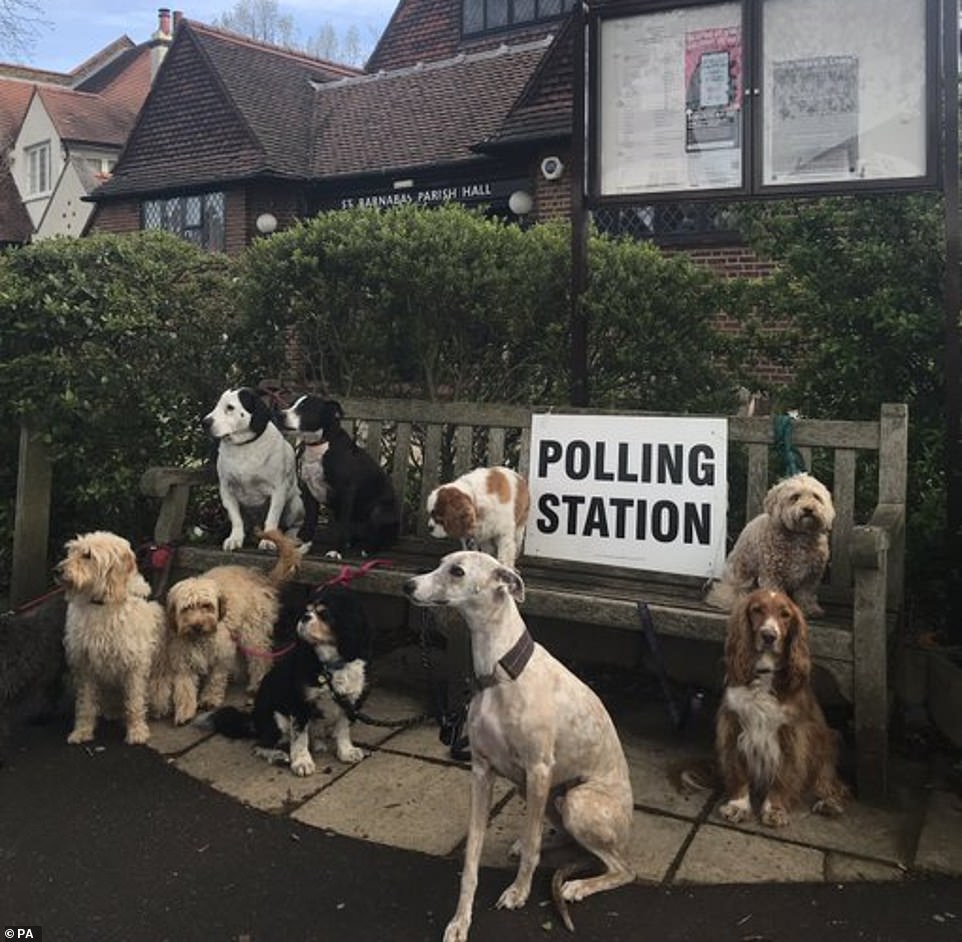 Dogs outside the polling station in Dulwich, South East London, this morning as the local and mayoral elections take place 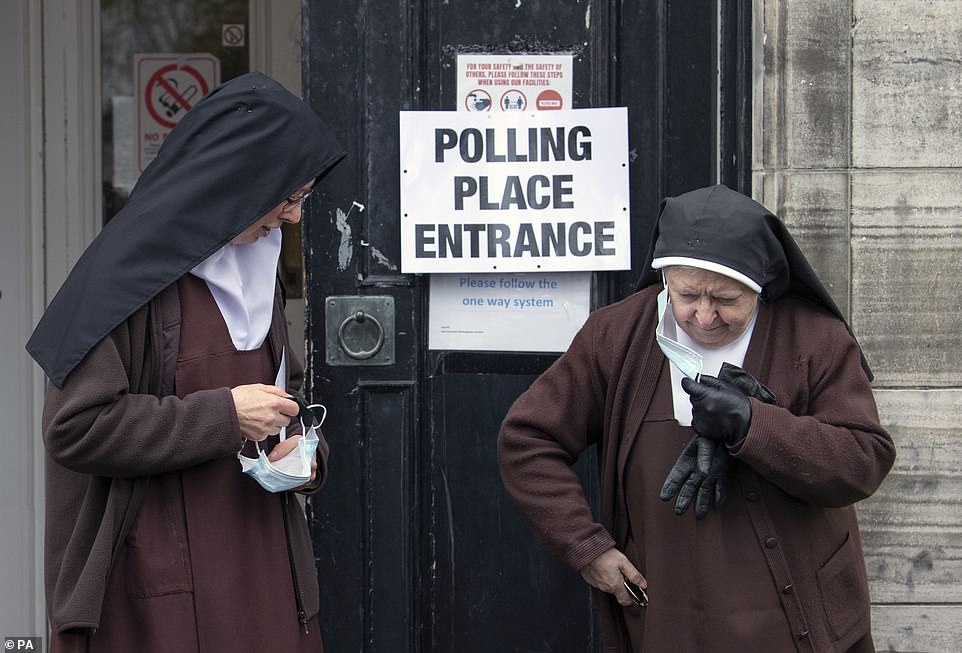 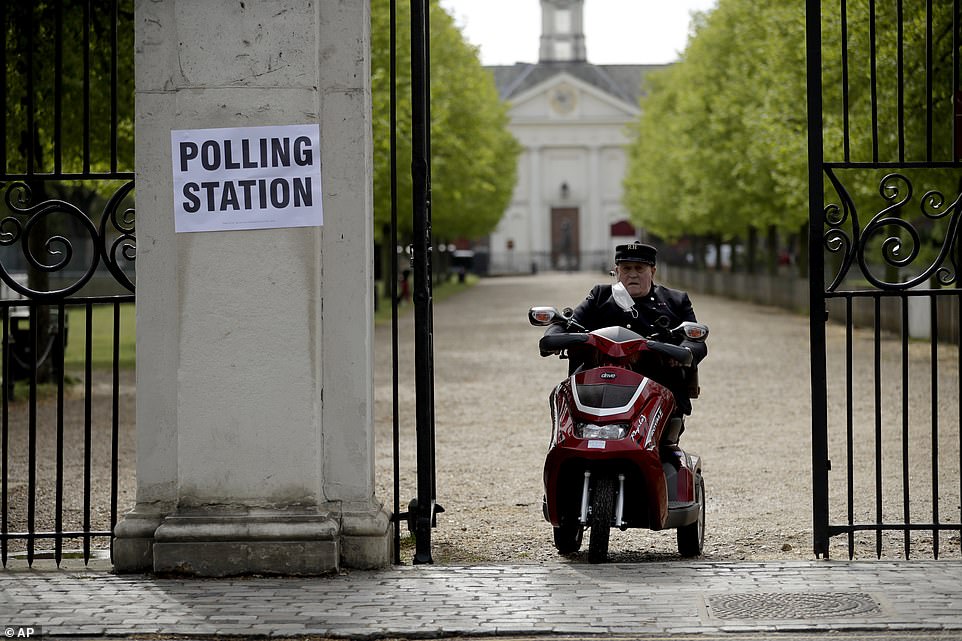 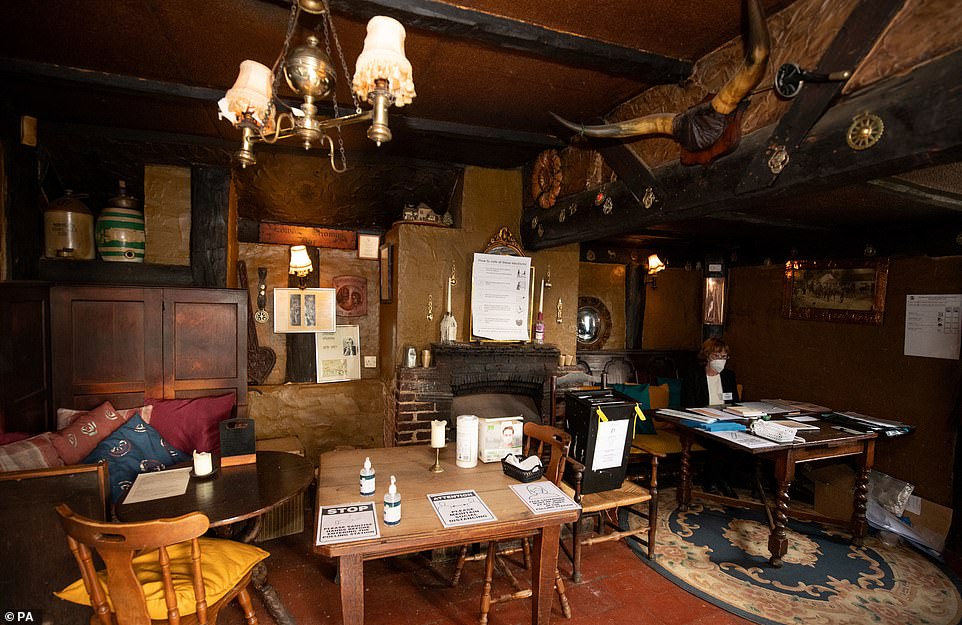 The polling station at the White Horse Inn in Priors Dean, Hampshire, today – also known by locals as the ‘Pub with no name’ 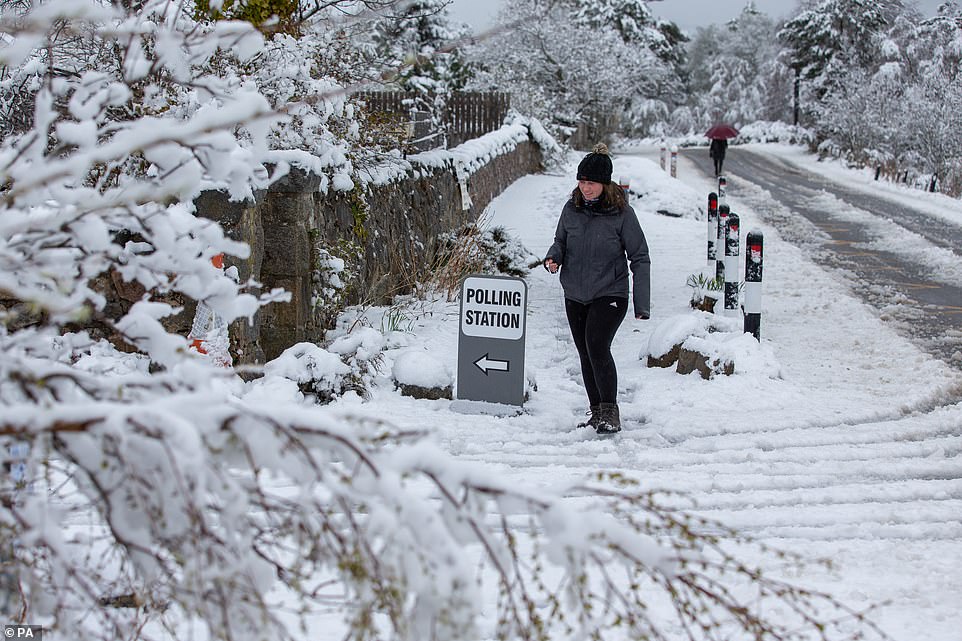 Snowy conditions at a Scottish Parliamentary election polling station in the village of Farr, near Inverness, this morning 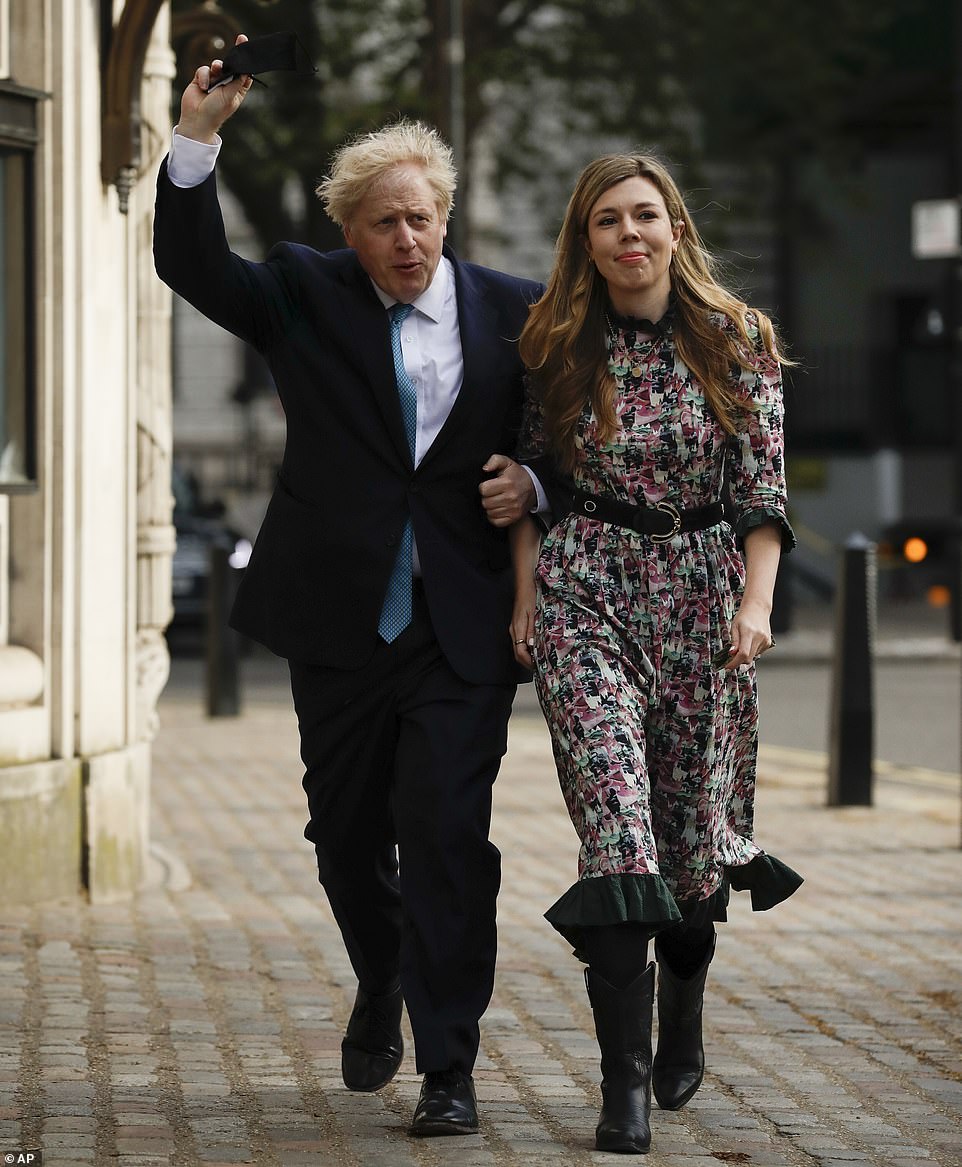 The Labour candidate is set to win a second term – but worries following a spate of knife killings could deprive him of a first round victory in today’s election.

An Opinium survey yesterday showed 52 per cent of Londoners think tackling knife crime should be the next mayor’s top priority.

The London election has tightened, with a YouGov poll yesterday giving Mr Khan a 12-point lead, based on first preference votes, down from 21 points a month ago. It suggested Mr Khan will win the contest in a second round run-off with Mr Bailey by 59 per cent to 41 per cent.

Knife crime in the capital has increased by more than 60 per cent between May 2016, when Mr Khan took office, and March last year, according to the Office for National Statistics.

‘That’s what I will do with these elections, as I will do in everything that the Labour Party does.’

Mr Johnson sought to downplay expectations as he insisted it will be a ‘very tough set of elections’ for the Tories.

The Prime Minister joined West Midlands mayor Andy Street for a cycle ride on a canal path in Stourbridge. Mr Street, the former boss of John Lewis, is expected to be re-elected, along with Ben Houchen, who is Tory mayor in Tees Valley.

In an eve-of-poll message last night, Mr Johnson argued the pair had done more in a few years than Labour did in the decades it had a stranglehold on the regions.

He said: ‘It’s Conservative mayors who are bringing new investment and local jobs to their areas. A new freeport and green jobs are on their way to Teesside and new trams, Metro lines and station upgrades to the West Midlands.

‘More has been delivered by Conservatives in four years than complacent Labour politicians have delivered in decades.’

Earlier, Mr Johnson tried to calm talk of the Tories winning the Hartlepool seat, saying it would be a ‘very tough fight’.

As Sir Keir’s hard-Left critics sharpened their knives, his allies insisted he be given more time to turn around Labour’s fortunes.

Shadow work and pensions secretary Jonathan Reynolds said parts of the UK were a lot ‘warmer’ towards Labour than they were in the General Election.

Speaking on BBC Radio 4, he said: ‘We hope the public will see how we have changed since 2019 – we have a new leader, we have a new direction, but to be frank it’s not been the easiest of years to make those wider messages. That’s just how it is, there’s no use complaining about that.’

Mr Reynolds added: ‘It’s a lot warmer for Labour than it was in 2019. People might not be totally convinced yet but they want to have that conversation.’

Nicola Sturgeon has denied she will hold a ‘wildcat’ referendum if the SNP wins a majority in today’s Holyrood elections.

The First Minister dismissed a claim by Scottish Tory leader Douglas Ross that she plans to organise an illegal independence ballot if Boris Johnson refuses to give formal consent for one.

During a BBC Scotland leaders’ debate Miss Sturgeon insisted: ‘No we won’t.’ 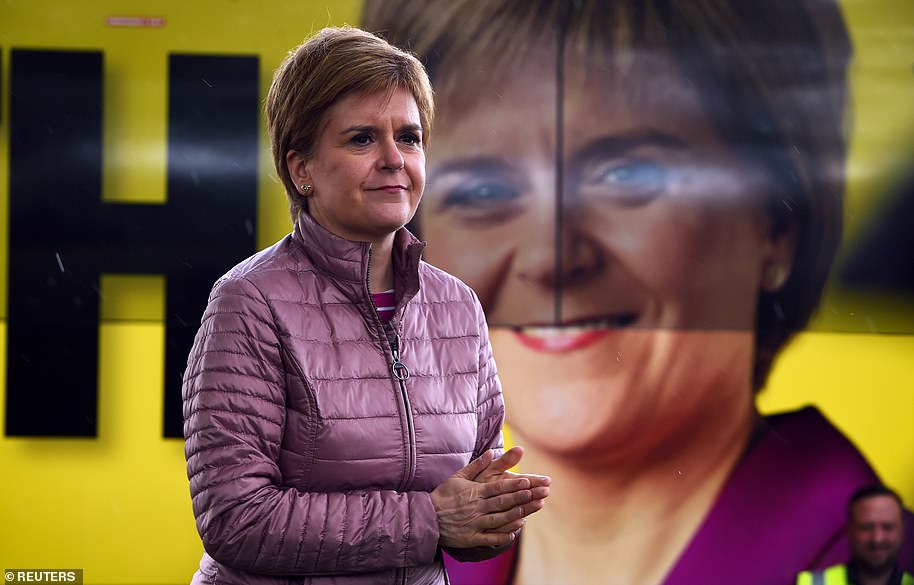 She also accused Mr Ross of spreading ‘smears and untruths’ about her position.

Polls suggest the SNP’s chances of majority are on a knife edge.

Mr Johnson, who has not campaigned north of the border in the run-up to the election, was asked if he would grant a referendum if Scots elect a majority of independence-supporting MSPs.

He said: ‘I think that most people in Scotland [and] around the UK feel this is not the time … to have a reckless, and I think irresponsible, second referendum.’

Derailed freight train that crushed homes and killed one person