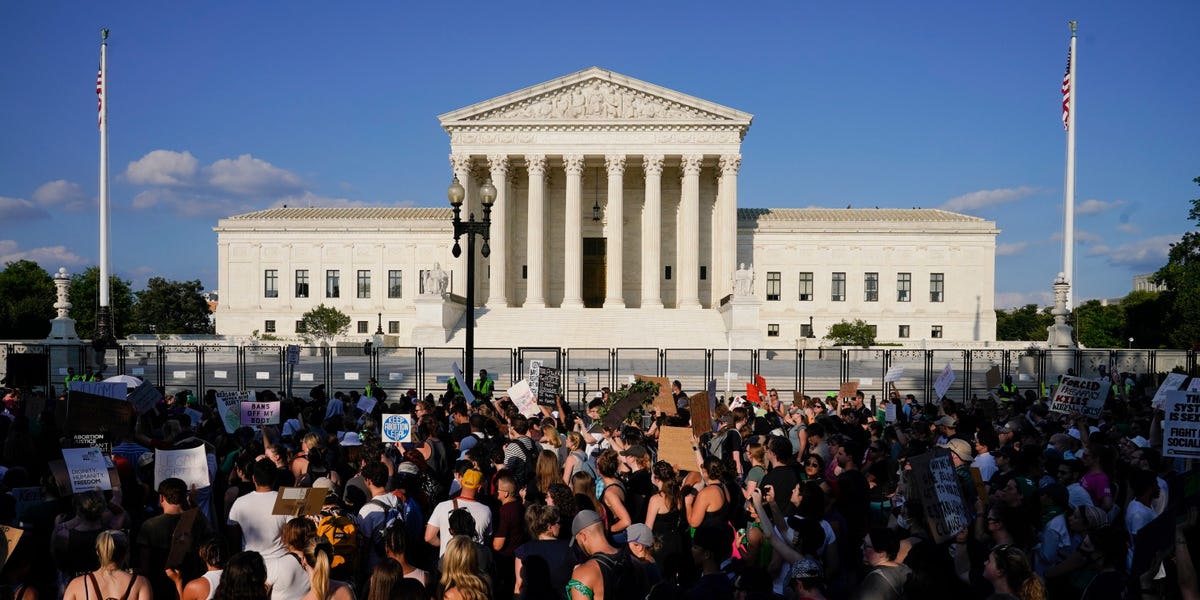 The Supreme Court has recently driven American law and life quickly to the right, handing down seismic decisions in June that eliminated constitutional protections for abortion, expanded gun rights, and bolstered religious liberties.

That rightward trend will likely continue when the justices take the bench on Monday for what’s shaping up to be another consequential term, featuring high-profile cases on affirmative action, election laws, and free speech, among many others.

“There’s no reason to think this coming term, or any term in the foreseeable future, will be any different. On things that matter most, get ready for a lot of 6-3s,” Irv Gornstein, executive director at Georgetown Law’s Supreme Court Institute, said during a term preview event in September.

The 6-3 conservative majority returns as it faces sinking public approval ratings, which plummeted in the wake of its recent decisions, most notably the overturning of Roe v. Wade on June 24. The ruling triggered a wave of abortion bans in Republican-led states, with one in three women losing access to the procedure. Undoing 50 years of precedent, the decision has spurred questions about the court’s legitimacy, prompting some of the justices themselves to publicly defend the institution.

The court has also been shaken by the unprecedented leak on May 3 of a draft opinion in the abortion case, which an internal committee is still investigating. The leak sparked nationwide protests during a time of already intense political polarization. Law enforcement officials on June 8 arrested an armed man who made threats against Justice Brett Kavanaugh near his home in Maryland, eventually resulting in President Joe Biden signing a bill into law that extends security protections to Supreme Court justices’ families.

“The bottom line is, I think it’s probably the worst environment in the Supreme Court that has ever existed in history,” Richard Pierce, a law professor at the George Washington University Law School, told Insider.

Monday is the first time the court will re-open to the public since the start of the COVID-19 pandemic. And it’ll be Justice Ketanji Brown Jackson’s first term following her historic confirmation as the first Black woman nominated to the high court.

The court will continue to add more cases to its docket in the coming months, and decisions will be handed down by next June. Here are some important cases to follow:

For more than 40 years, the Supreme Court has held that universities may consider race as a component of their admissions processes. But the justices could toss out that precedent as it’s being challenged in two major cases.

Students for Fair Admissions, a nonprofit founded in 2014 by Edward Blum, an opponent of affirmative action policies, alleged that the University of North Carolina discriminated against Asian and white applicants and violated the Constitution’s equal protection clause by considering race in its admissions.

The group also sued Harvard University, claiming the Ivy League school discriminated against Asian applicants, in violation of the Civil Rights Act of 1964, which prohibits private institutions that receive federal funding from discriminating on the basis of race.

Both of the universities have denied claims of discrimination, and argued that their race-conscious admissions programs are lawful. The lower courts agreed with them.

But the Supreme Court decided to take up the pair of cases, clearing the way for the conservative majority to potentially eliminate affirmative action in higher education – a hot-button issue that’s long been publicly debated. A ruling in favor of the challengers could upend college admissions processes and likely lead to fewer minority students enrolled.

“That will have enormous implications for universities all over the country, and then ripple effects in every other area: employment, for instance,” Pierce said.

Arguments for the cases are scheduled for October 31.

The court could upend how elections are run

Another blockbuster case concerns a radical legal theory that, if the Supreme Court embraces, could have the power to upend how elections are run nationwide.

North Carolina House Speaker Timothy Moore, along with other Republican members of the state’s general assembly, have asked the justices to review the “independent state legislature” theory, which asserts that the Constitution gives state legislatures the power to draw voting maps and set election laws, without any oversight from other authorities, like the state courts or the governor.

The legislators invoked the theory in response to the North Carolina State Supreme Court striking down their newly drawn congressional map as a partisan gerrymander that favored Republicans. The Republican lawmakers want the Supreme Court to reinstate their map and to support their independent state legislature doctrine.

The little-known theory gained ground in the 2020 elections, as former President Donald Trump and his allies relied on it to support their unsuccessful bid to overturn President Joe Biden’s victory.

Legal experts have widely debunked the theory, arguing that it has no place in the Constitution. They’ve also sounded the alarm about the potential consequences of the Supreme Court accepting it, tossing out the way elections have been handled for hundreds of years.

“This would effectively remove all checks and balances at the state level, handing virtually unchecked power to set federal election rules to politicians in the state capitol, cutting out the governor and the state courts and the state constitution,” Thomas Wolf, deputy director for the Brennan Center’s Democracy Program, told Insider, adding that such an outcome would be “catastrophic.” Arguments for the case have not been scheduled by the court yet.

A redrawn congressional map is also at the heart of another significant case before the Supreme Court, in which the justices will hear a challenge to Alabama’s 2020 redistricting plan.

A group of Black voters claimed the state legislature diluted their voting power by packing Black Alabamans into one of the state’s seven congressional districts, instead of creating two majority-Black districts.

Republican state lawmakers argued that they drew the map from a race-neutral standpoint, and that the Constitution does not require them to create districts based on race.

Federal judges sided with the challengers, ordering Alabama to create a new map as the current one likely violated Section 2 of the Voting Rights Act, which prohibits voting practices that discriminate on the basis of race.

“We trust that after reviewing our argument, the United States Supreme Court will protect the Voting Rights Act as well as the rights of the very communities who marched to ensure its passage,” Evan Milligan, executive director at Alabama Forward and the lead plaintiff in the case, told Insider in a statement.

Alabama called on the Supreme Court to reverse the decision, which it did, and consequently took up the case for review.

The justices have chipped away at the Voting Rights Act through a series of rulings over the past several years, and could do so again in this case.

“It would undermine the entire reason why we have the Voting Rights Act in the first place. It’s a landmark piece of legislation that really is about how the history of discrimination interacts with present political conditions,” Yurij Rudensky, senior counsel for the Brennan Center’s Democracy Program, told Insider.

Arguments for the case are scheduled for October 4.

The court will review free-speech, Native American rights, and more

The court is set to review a slew of other important matters, including those involving water pollution, Native American rights, and free speech.

The first case the court will hear on Monday is Sackett v. Environmental Protection Agency, which deals with an Idaho couple who sought to build on their land but the EPA blocked them from doing so on the grounds that the area contained wetlands regulated by the agency under the Clean Water Act.

“It’s a very, very hard case, a hard question, because on one side you have people like the Sacketts and lots of other people, particularly rural people who don’t have freedom to use their own property the way they would like to,” Pierce said. “But on the other side, you’ve got people who are harmed by pollution and would be harmed by any pollution that begins in, say, some isolated pond on somebody’s property, but then whenever there’s heavy rainfall, finds its way into a river.”

Later in the term, the court will hear arguments about whether parts of the decades-old federal Indian Child Welfare Act are unconstitutional. Congress passed the legislation in 1978 in response to growing concerns that Native American children were being separated from their families and adopted by non-Native families. But challengers say the law discriminates against non-Native Americans.

And in a free-speech case, the court will revisit religious and LGBTQ+ rights as a Colorado designer refuses to create wedding websites for same-sex couples because of her religious beliefs. The case is reminiscent of a Colorado baker who refused to create a wedding cake for a same-sex couple because of his religious beliefs. The Supreme Court narrowly ruled in favor of the baker in 2018, but did not address the major free-speech questions at issue.

Altria and Juul end noncompete deal: Here is what that means for e-cigarette gross sales and marketing and advertising

Altria and Juul end noncompete deal: Here is what that means for e-cigarette gross sales and marketing and advertising