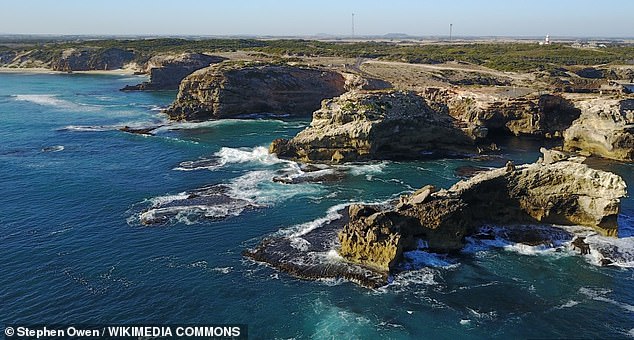 A snorkeller is thought to be the victim of a shark attack after going missing in front of his horrified family during a holiday swim.

A Victorian man disappeared in the waters off Surfers Way near Port MacDonnell in the south-east of South Australia, at around 5pm on Thursday, sparking an immediate search.

The 32-year-old man was holidaying with his family, when they lost sight of him snorkelling close to the beach.

‘We do have grave fears for this person but we will do everything we can and we’ll put every effort into trying to locate him,’ Limestone Coast Police operation manager Campbell Hill told The Advertiser.

PolAir, SES Crews, Fisheries SA and local volunteers continued their search for the man on Friday morning, but police now suspect he may be the victim of a shark attack.

A damaged wetsuit and flippers, believed to belong to the missing man, were found by PolAir and Police Water Operations members on Friday morning.

SA Police have described the situation as ‘tragic’, when PolAir spotted a shark in the area during the search and rescue operation.

Following the new discovery, the air and sea search is now being scaled back.

Inspector Hill said he was grateful for the ‘tremendous assistance’ from local members and the public on the search.

‘They’ve been able to come help us with the local knowledge of the water and local landmarks, we did have people out on paddle boards and people are very willing and we’re incredibly grateful.’

The police investigation now leading to a report to be prepared for the Coroner.

Bloomberg: The Pentagon is delaying commercial production of the F-35 fighter indefinitely