Swampy and Son:16-year-old HS2 protestor joins his father living up a tree


The 16-year-old son of veteran eco-warrior ‘Swampy’ has joined his father in a sit-in protest against the HS2 rail line after the activist returned to the front line of environmental activism after a ‘quiet ten years’.

The activist, real name Daniel Hooper, has teamed up with an HS2 rebellion group along with son Rory as it holds out against eviction from woodland marked out for clearance.

Swampy, 47 and eight other activists have been living in a tree, nicknamed ‘The Beancan’, in Jones’ Hill Wood in Aylesbury, Bucks., since October 1.

Eleven protestors have so far been arrested at the ancient woodland site. 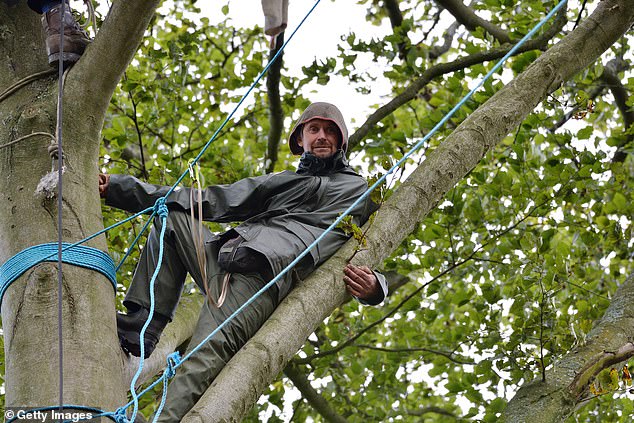 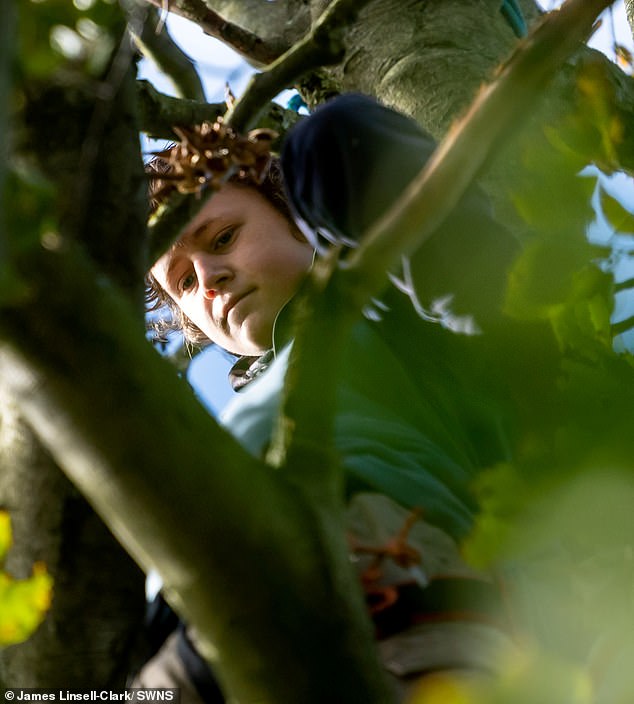 Teenager Rory joined his father in occupying the tree in in Jones’ Hill Wood, protesting against HS2 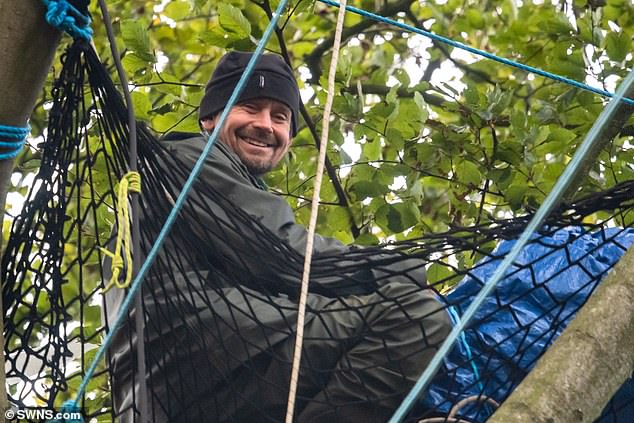 After ‘a quiet ten years’  Daniel Hooper is back, in a sit-in protest against the HS2 rail line

The woodland is one of 20 sites that have been identified as targets for clearance and ground works by HS2 from October 1st.

Father-of-four Swampy has remained firmly up the tree as the HS2 National Eviction Team have removed similar treehouse structures from the treetops around them.

Swampy has remained tight-lipped about his part in the HS2 rebellion protest.

He refused to talk to a reporterm telling another campaigner he did not like ‘the cult of celebrity.’

But protestor Mark Keir, 59, who is one of 30 people camped on the ground in the woodland, said: ‘His being up the tree is saying all that it needs to say.

‘Everybody knows he is up there – and it’s a great endorsement for us, because it’s getting our campaign a lot of attention.

‘It’s been bringing lots of people down here, which really gives us a platform to spread our message as to why we are here.

‘He is very welcome here.’

Swampy, son of middle-class Berkshire parents Peter and Jill, was first involved in environmentalism when he became the poster boy for protests against the A34 Newbury bypass in 1996.

He then spent seven days and seven nights living in a tunnel dug by campaigners to stop the £50 million A30 dual carriageway link road in Devon a year later.

He told ITV he didn’t enjoy being seen as a figurehead when he was young.

He said then: ‘I hated it, it wasn’t what I wanted to do, and I don’t think it did the movement much good.’ 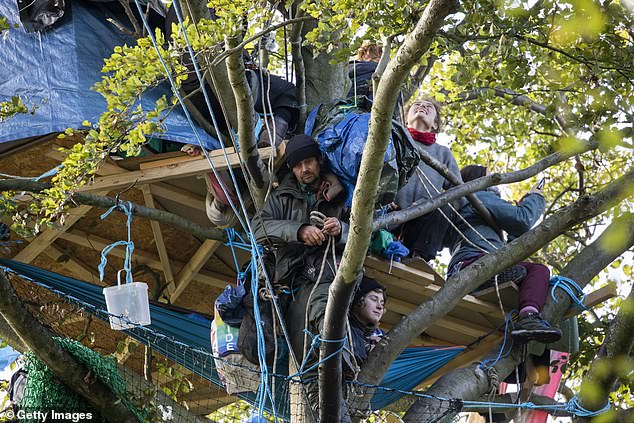 Swampy and eight other activists have occupied a tree in Jones’ Hill Wood in Aylesbury, Bucks

The activist then disappeared from public view. In 2013 he was found working as a tree surgeon for the Forestry Commission while he lived with his four children including Rory in a yurt alongside 100 hippies, New Age travellers and nudists in a 200-acre stretch of farmland near Llandeilo in Carmarthenshire.

And although hie and his children were sleeping on sheepskins in the yurt, he had made sure the children do attend the local school each day, even dressed in traditional uniform.

The council used to sent a school bus up the dirt track to the commune to pick them up.

He said then: ‘I’ve got a family now and a home. I can’t run off for weeks at a time. But my views on the environment are just the same.

‘There is part of me that misses that life. Spending a week up a crane in protest to the construction of Terminal 5 at Heathrow was something special, but I leave it to others at the moment.’

But last year he was out campaigning once more – fined for blockading one of Britain’s largest oil refineries in an Extinction Rebellion protest by attaching himself to a concrete block at the entrance to the giant Valero plant in Pembrokeshire, Wales.

Hooper was fined £40 after he pleaded guilty at Haverfordwest magistrates’ court in October 2019.

Swampy and son and the other activists who have now vowed to stay in the trees.

This is despite building pressure from the National Eviction Team (NET), dwindling supplies and the continuing storm that has battered England over the last five days. 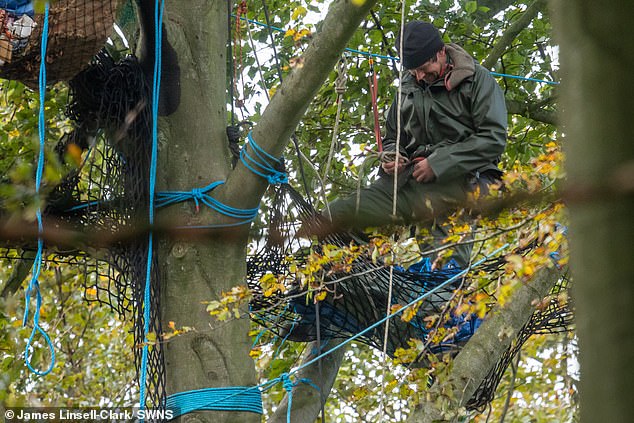 The group who have been occupying Jones’ Hill Wood have declared part of their intention is to highlight the loss of habitat, and irreversible damage being done by HS2 across the line.

Lawyers for Nature yesterday released the following statement on Facebook: ‘The scenes of destruction as HS2 begins to start felling woodlands along the route are heartbreaking.

‘Over the last 24 hours, we’ve been working with independent ecologists who have recorded evidence of rare barbastelle bats in Jones Hill Woods near Wendover.

‘Further enquiries suggest that HS2 does not have a licence from Natural England to disturb bats at the site, or to damage or destroy their roosts.

‘Therefore, prima facie, it would spread that further work and/or felling at Jones Hill is illegal.

‘We have helped to draft letters to both Natural England and HS2 pointing out the legal position and requesting that works at the site are halted pending further investigation into the existence of bats and bat roosts at the woods.

‘We hope that HS2 will respect and obey the law and that, if not, Natural England will enforce it. 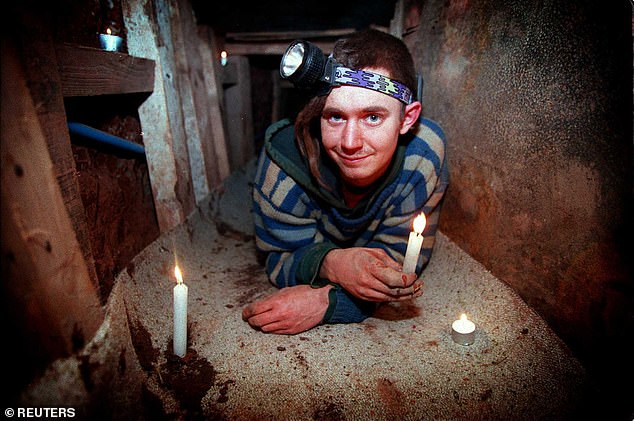 Hooper, was first involved in environmentalism when he got involved  in protests against the A34 Newbury bypass in 1996.  He is pictured in one of his tunnels in 1997

‘If not, however, we need to bring public pressure to bear to stop wildlife crimes being committed by way of the destruction of this woodland.’

Despite the threat of violence and arrests, the remaining activists defending the trees within the threatened land are resolved to stay and they accept any and all consequences of their actions.

Mark Keir who has been live-streaming from the site, added: ‘We’re all feeling really good and really strong.

‘We have lots of people here, both in the tree and on the ground, who every bit as much energy and as much skill for this cause as Swampy does.

‘Ultimately, we just need to stop this thing, or slow it down so much that people will start really hearing what it is all about.

‘We know that HS2 have none of the licences they need to work here.

‘It’s such a biodiverse piece of land, it’s so beautiful here.

‘They do not have the bat licence they need, or the dormouse licence, or anything. We’re hoping that we can try and stop this on those grounds.

‘We’ve had people who have been removed from the tree and taken to a cell – and then come straight back here after being released. We will stay here as long as it takes.’

The pregnant spouse of a San Jose Sharks participant who alleged her husband was a compulsive...