Queen Silvia and King Carl XVI Gustaf of Sweden hosted a state banquet for Finnish President and his wife on Tuesday night.

President Sauli Niinisto and his wife, Jenni Hauki, are on a two-day state visit to the country as both Sweden and Finland prepare to submit their bids to join NATO tomorrow.

They were honoured with a state banquet at the Royal Castle in Stockholm, where guests included Crown Prince Victoria and her husband, Crown Prince Daniel.

Queen Silvia , 78, looked typically elegant in a long-sleeve pink gown with a dramatic train as she arrived alongside her husband and the visiting dignitaries. 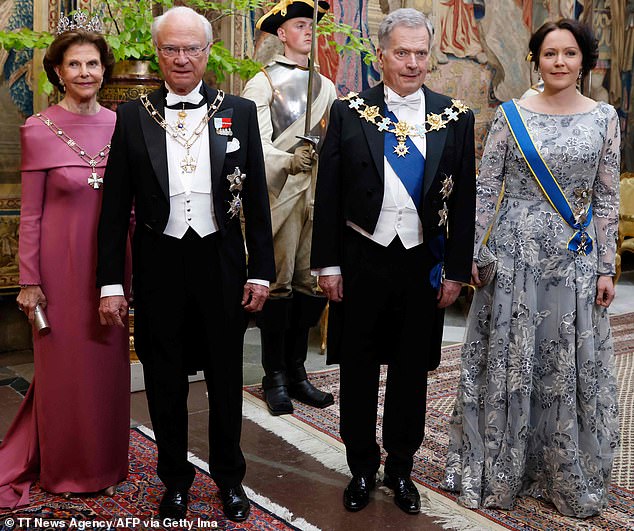 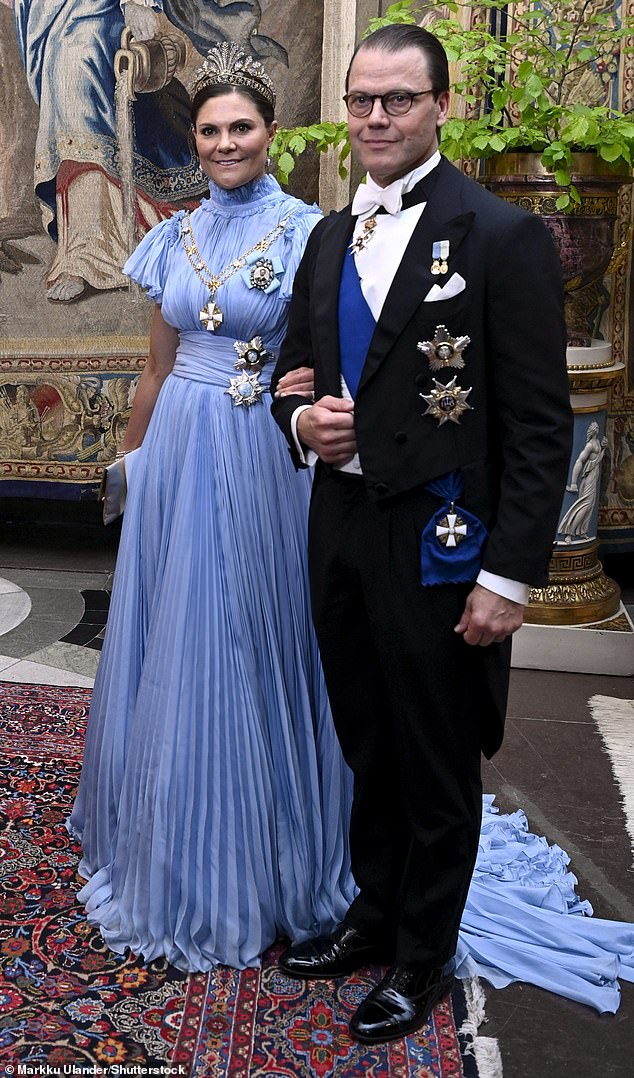 Crown Princess Victoria, 44, pictured with her husband Daniel, opted for a pleated periwinkle blue gown with an unusual Victoriana neckline and a matching sash around her waist 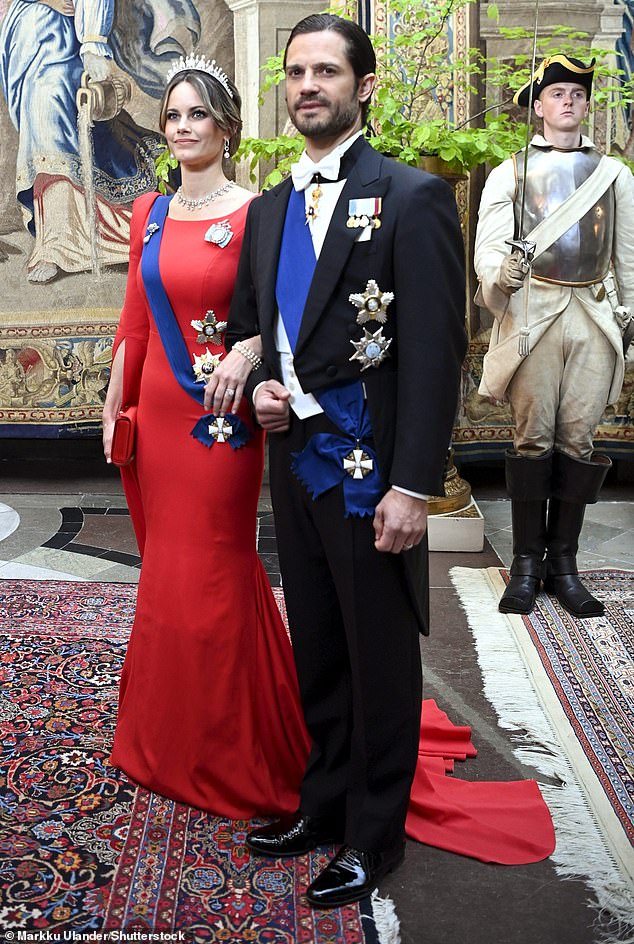 Her eldest daughter, Crown Princess Victoria, 44, opted for a pleated periwinkle blue gown with an unusual Victoriana neckline and a matching sash around her waist.

She finished the ensemble with a twinkling tiara and a simple silver clutch.

The state visit is a public signal of the strengthened cooperation and bilateral relationship between Sweden and Finland as they both prepare to submit applications to join NATO. 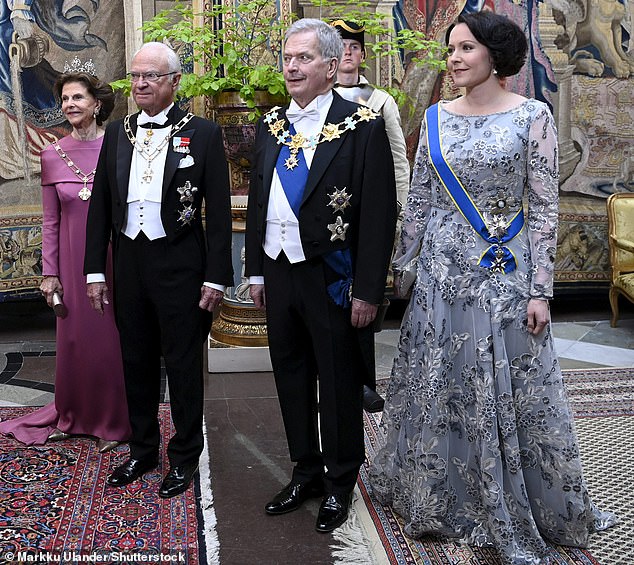 President Sauli Niinisto and his wife, Jenni Hauki, pictured right with the Swedish King and Queen, are on a two-day state visit to the country as both Sweden and Finland prepare to submit their bids to join NATO tomorrow 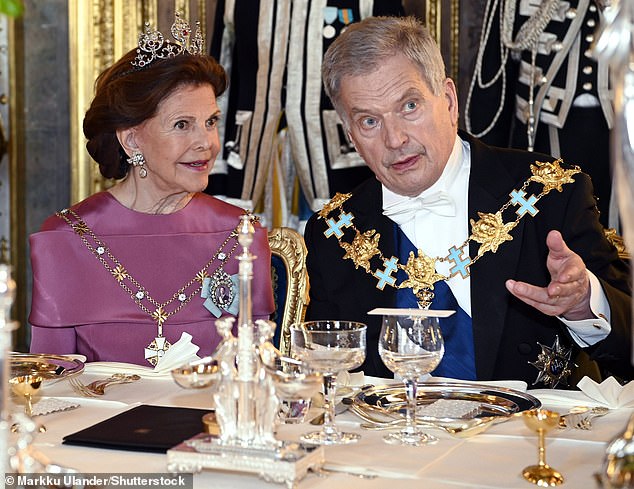 ‘I’m happy we have taken the same path and we can do it together,’ Swedish Prime Minister Magdalena Andersson said Tuesday during a joint press conference with Finnish President Sauli Niinisto.

Finland, which shares a 1,300-kilometre border with Russia, and Sweden have been rattled by Russia’s invasion of Ukraine.

Their applications will jettison decades of military non-alignment to join the alliance as a defence against feared aggression from Russia. 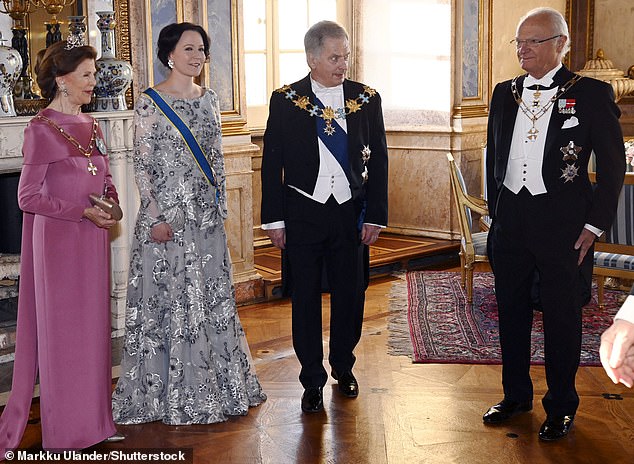 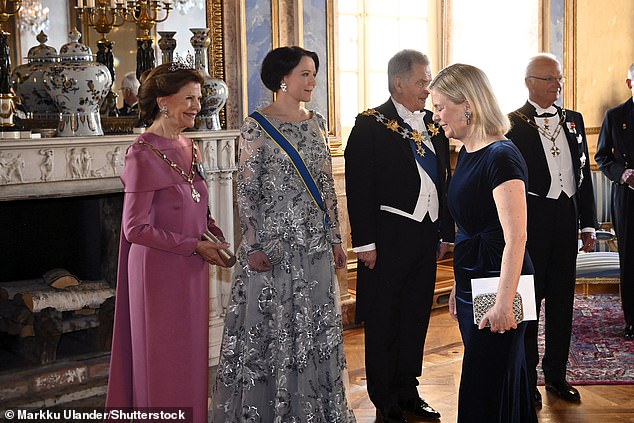 But the main obstacle to their membership comes from within the alliance despite NATO Secretary General Jens Stoltenberg repeatedly insisting the two countries would be welcomed ‘with open arms’.

Turkey has accused Sweden and Finland of acting as a hotbed for terrorist groups and its president insists Ankara will not approve expansion.

Any membership bid must be unanimously approved by NATO’s 30 members.

Niinisto said Tuesday he was ‘optimistic’ Finland and Sweden would be able to secure Turkey’s support.

Andersson and Niinisto are to meet US President Joe Biden in Washington Thursday to discuss their historic bids.

‘This will increase the number of member states that are also members of NATO. And this will strengthen and increase the cooperation and the security in Europe,’ he said.