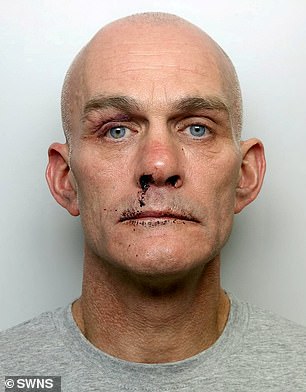 Andrew Wrigglesworth, from Birstall, West Yorkshire, deliberately drove into his colleagues in a ‘horrendous’ and ‘barely conceivable’ attack

A sweet factory worker was today jailed for 30 years for trying to murder six of his colleagues by running them down in his car after a fight at the Christmas party.

Andrew Wrigglesworth, from Birstall, West Yorkshire, deliberately drove into his colleagues in a ‘horrendous’ and ‘barely conceivable’ attack while at the wheel of his red soft-top Audi A4.

The 50-year-old shouted ‘I’m going to f***** kill them’ and ‘I’m going to run them over’ before ploughing into the group, leaving one with permanent brain damage.

Staff had been enjoying a Christmas party at Moorlands Working Men’s Club in Cleckheaton on 22 December last year.

But an argument broke out at last orders and Wrigglesworth was punched in the face during a scuffle.

Enraged, Wrigglesworth dashed to his Audi, yelling threats about killing his co-workers

He then mounted the pavement and deliberately drove at the six men on Bradford Road. One of the six men, aged 43, sustained life-changing injuries.

The other five men were all also wounded and some were knocked unconscious.

Wrigglesworth did not stop at the scene, but drove off at high speed, with his windscreen shattered.

He was later arrested at his house in Birstall.

He was found guilty of all six counts of attempted murder in August after a seven-day trial at Leeds Crown Court. 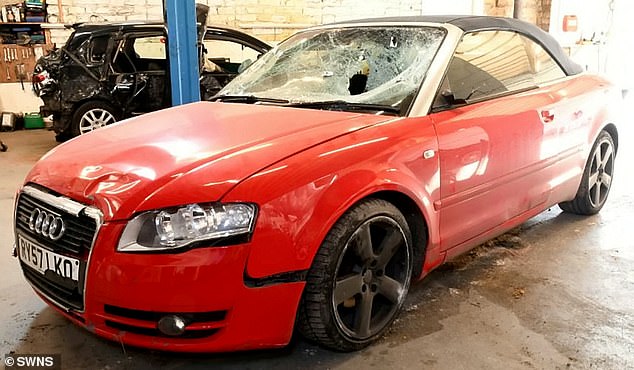 After a fight, Wrigglesworth dashed to his Audi, yelling threats about killing his co-workers (the car is seen after the attack)

Prosecutor Dafydd Enoch QC said Wrigglesworth drove at his victims from behind at more than 34mph.

Mr Enoch said: ‘He professed not to realise what had happened. He described it all as an ‘unfortunate accident’.’

Mitigating Abdul Iqbal QC for Wrigglesworth had initially had good intentions in the car park of the working men’s club after the Christmas Party.

Mr Iqbal said Wrigglesworth was helping two women who claimed that they had been physically assaulted.

But he got into a verbal argument that led to him being punched or pushed, which ‘enraged’ him.

Mr Iqbal described Wrigglesworth as a ‘good father’ who worked hard to bring up his children, and said that the attempted murders were ‘out of character’.

Wrigglesworth has been disqualified from driving for life.

Wrigglesworth has been sentenced to 30 years imprisonment for the six counts of attempted murder.

He will serve two thirds of his sentence before being released on licence.

Sentencing, Judge Tom Bayliss QC said there was a ‘scuffle’ in the car park in which Wrigglesworth was involved.

In that fight somebody punched the defendant and gave him a bloody nose. This ‘incensed’- him and caused him to commit violence.

The judge said that he wanted to get revenge for being punched and that it was premeditated. 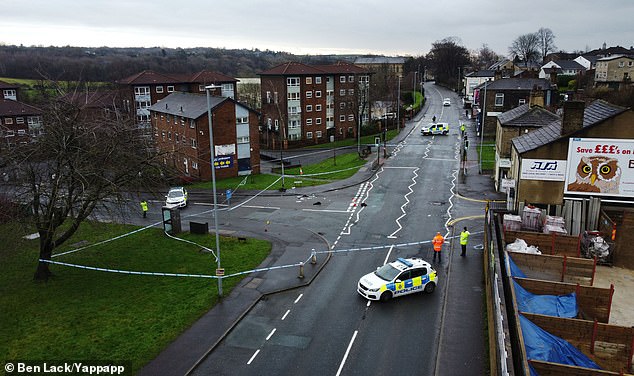 Wigglesworth mounted the pavement and deliberately drove at the six men on Bradford Road (pictured). One of the six men, aged 43, sustained life-changing injuries

Outside court, Detective Inspector Andrew Cass, from the Homicide and Major Enquiry Team, Senior Investigating Officer in the case, said:

‘This was an absolutely horrendous offence and we welcome the strong sentence handed down to Wrigglesworth today.

‘It is barely conceivable that someone would attempt to carry out such an outrageous and brutal act, especially against their own colleagues.

‘His actions resulted in six men being literally mown down with one man receiving injuries which will stay with him for the rest of his life.’

He added: ‘A jury of Wrigglesworth’s peers determined he had attempted to murder all six of his victims on that Christmas evening, and there is no doubt in our minds that such an outcome must have been his intent in acting in the way he did.

‘He has never shown any remorse for his actions on that evening, but I hope the lengthy sentence he now faces will be of some comfort to his victims.’