Swim instructor Kyle Daniels knew there was so much movement underwater that nobody would see if inappropriately touch his young students, jury hears

A Sydney swim instructor knew there was so much movement underwater that nobody could see him inappropriately touching his young students, a jury has heard.

With so much activity at the busy north shore pool, ‘kids and parents everywhere,’ Daniels took advantage of his students by deliberately touching them on, in, or near their vaginas, he said. 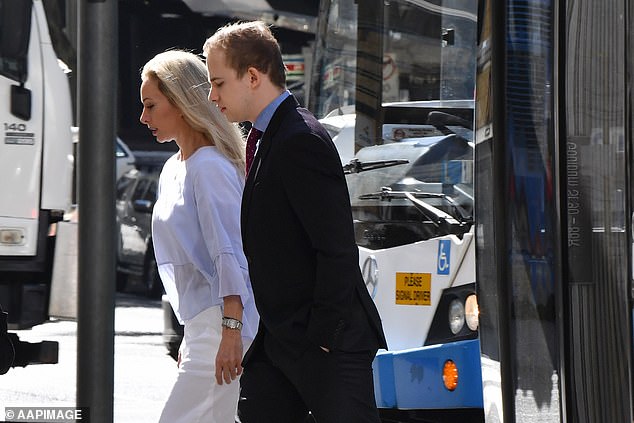 But Daniels continued to deny all allegations he assaulted the children for his own sexual gratification on his second day in the witness box on Wednesday in the NSW District Court.

He has pleaded not guilty to 26 charges, including multiple counts of having sexual intercourse with a child under 10 and indecently assaulting a person under 16.

He is accused of touching nine students aged between five and 10 on or near their genitals while instructing them between February 2018 and February 2019.

The Crown has accused Daniels of tailoring his answers after listening to more than five weeks of evidence.

Low-quality CCTV footage showed Daniels instructing a group of students and holding one by the stomach while giving hands-on stroke corrections and another student swimming a short distance toward him and performing a drill.

Defence barrister Leslie Nicholls asked Daniels if he had any cause or opportunity to closely view the CCTV footage, located at the far back corner of his manager’s office.

‘No not at all,’ he responded.

After the jury has sat through pre-recorded police interviews and cross-examinations of each of the nine girls as well as one or both of their parents, pool staff, psychologists and other experts, Daniels’ defence said the evidence would come to an end.

The trial before Judge Kara Shead in the Downing Centre continues.

Cut meat and dairy by a FIFTH to save planet: Report tells Brits to slash car trips and curb flights

Winners and losers from the third College Football Playoff rankings

Suzi Quatro reveals how Covid has impacted her long-distance marriage

Is Bank of America a buy or sell in April?