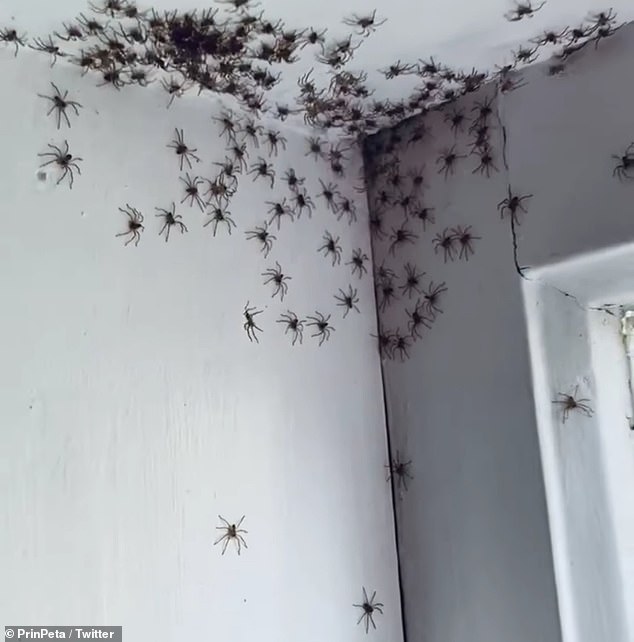 Not your average home invasion: Australian mom gets the shock of her life when she spots dozens of spiders on the ceiling of daughter’s bedroom

Horrifying pictures show an army of unwanted visitors in a little girl’s bedroom, after her terrified mum made the alarming discovery of a platoon of spiders.

The mother found a swarm of leggy spiders crawling out of a roof crack and down the white walls of her daughter’s room in Sydney.

She shared the terrifying images with a friend, who confirmed the spiders had been removed.

She shared the terrifying images with a friend, who confirmed the spiders (pictured) had been removed

A friend shared the chilling photos on social media and said, ‘They’re bigger than the tiny babies I’ve seen. You can see how big they are by the window.’

‘They are fast and they jump and they’re big. I catch them and put them outside. This, however, would totally freak me out,’ she commented.

The woman said the spiders appeared to be huntsman spiders, a fairly harmless species commonly found in Australian homes.

Male and female huntsman have a long and relatively peaceful courtship which includes caressing one another.

The mother will lay a sac of silk with about 200 eggs and stay with her babies to protect them for a few weeks as they grow by moulting their skin.

Many Australians have encounters with the spindly-legged creatures, such us another woman who found baby huntsman infesting her home last year.

She found the babies with mum underneath a painting that was hanging on the wall.

‘Only in Australia,’ the woman captioned the short clip of the unwelcome house guests on TikTok.