Mum is slammed by cruel parents for serving her son spam in his lunchbox – so do you agree?

A young mother has been slammed for serving her kindergarten son processed food in his lunchbox.

The woman, from Sydney, shared a picture showing a sushi sandwich she made with pan fried spam, scrambled eggs and cooked shredded carrots, along with a bottle of Yakult, potato chips, grapes and apple pieces.

She explained it was her ‘first attempt’ at making a sushi sandwich for her little son to enjoy at school, saying she hoped ‘it will be eaten’.

But after sharing her creation, she was met with nasty remarks from fellow parents who criticised her for packing the processed spam, while some suggested other kids would make fun of her son for eating it at school. 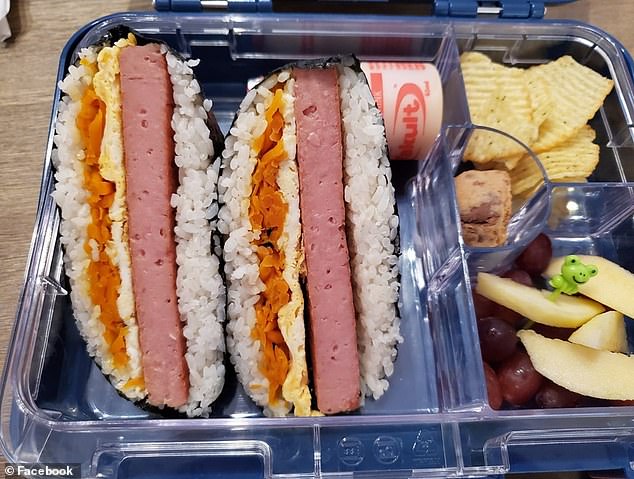 Is spam inappropriate in a school lunchbox?

However, dozens of parents quickly jumped to the mother’s defence, with one saying: ‘Why does everyone have such a problem with the Spam? I personally don’t eat it, but isn’t the goal to have fed happy children?

‘And any kid who picks on another just for their food choices has unfortunately probably been raised with a small minded parent.’

Others told the cruel trolls to ‘find your manners’ while one mother said: ‘If I ever heard my children making fun of someone else’s food, I’d be pulling them up on it so fast their head would spin.’

Many praised the mother for creating a ‘delicious’ lunchbox while others said their own children would be ‘jealous’ if they saw her son’s food.

‘That looks delicious and I commend you on your creativity! I’ve never seen a sushi sandwich but I may have to try and make it now,’ one wrote.

Other parents revealed they ‘love’ spam, and have been serving their children the meat for years with no complaints.

‘I grew up on spam and so did my kids, love it. I always have a can in the cupboard. Will have to try this,’ one wrote.

Another added: ‘I grew up in Hawaii – classic staple. Don’t really enjoy spam as an adult but it still remember how much I loved them as a kid.’