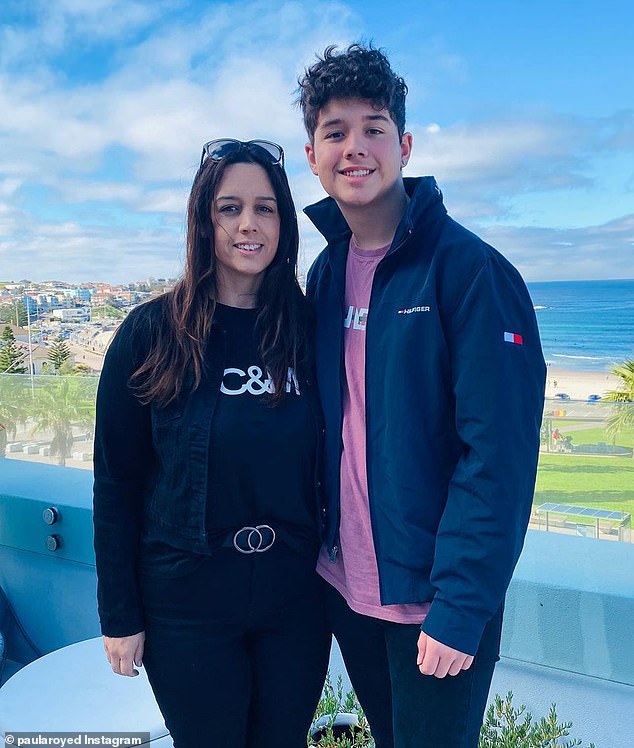 A single mother is bravely battling an aggressive form of cancer to stay alive for her beloved son after a surgeon discovered a tumour while performing a breast reduction.

After losing an incredible 65 kilos, Paula Royed had her 24JJ chest reduced to relieve chronic back pain on August 22, 2020.

Two weeks later, the 41-year-old sales manager from Kings Langley, Sydney, was shocked to receive a phone call from her doctor who revealed he had found a lump during surgery.

Further testing revealed the nature of the growth and on September 20, Ms Royed was given the devastating news that cancer had spread from her breast tissue into nearby lymph nodes.

She was diagnosed with stage two metastatic breast cancer, which is where cancer cells have spread from the original cancer site in the breast to more distant parts of the body.

Sydney mother Paula Royed (left with son Seb, 17) had a breast reduction to relieve her chronic back pain on August 22, 2020

Ms Royed told Daily Mail Australia the ordeal has been ‘an emotional rollercoaster’ she never expected to experience in her wildest dreams.

She said her son Seb, 17, initially ‘broke down’ but quickly swung into protection mode for his mum.

‘I’m very proud of him for what he’s done whilst I’ve been sick,’ she added.

‘He’s been working at a fast food store and modeling to save for the car he just bought, so now he can take me to my tests.’

Following a series of scans and blood tests, doctors prescribed a course of experimental chemotherapy to give Ms Royed the best chance of survival.

Ms Royed (left, on her first day of chemo and right, on her fifth) has been sharing her cancer journey on Instagram and said she has spoken to countless women living through the same nightmare

Her treatment began on October 29 with four rounds of doxorubicin hydrochloride and cyclophosphamide, followed by a 12 weeks of taxol infusions which she is halfway through.

Ms Royed will then undergo 16 rounds of radiation in a bid to eliminate all traces of the insidious disease, which doctors say she has a strong chance at beating.

While she said she feels lucky to have secured a place on the experimental trial, chemo has been a difficult road.

Debilitating side effects include nausea, vomiting, diarrhoea, fever and fatigue, as well as the most obvious sign: hair loss.

Ms Royed said she also lost her sense of taste and developed excruciating mouth ulcers as well as aches and pains all over her body in the early stages of treatment.

– Constant back, bone or joint pain

– Difficulty with urinating (either incontinence or not being able to go); this can be a sign that nerves in your back are being pinched by a tumour

– Numbness or weakness anywhere in your body

– Loss of appetite or weight loss

A crowdfunding campaign created by a friend to help Ms Royed and her son financially during treatment had raised $3,235 at the time of writing.

Paula is one of an estimated 19,974 Australian women diagnosed with breast cancer each year.

In 2020, the year of her diagnosis, breast cancer was the fifth leading cause of cancer death in Australia and the second most common cause of death from cancer for women.

The most common breast cancer metastasis sites are the bones, lungs, brain, and liver, with symptoms varying depending on the location.

These can include joint pain, difficulty urinating, nausea, dizziness and shortness of breath, as well as a constant dry dough and numbness in the extremities of the body such as fingers and toes.

Fortunately, advances in treatment mean that some women with metastatic breast cancer now live for many years after their diagnoses.

Ms Royed (pictured with son Seb before treatment) is one of an estimated 19,974 Australian women diagnosed with breast cancer each year

However Ms Royed’s story could be very different.

She was facing a 12-month wait for her breast reduction at a public hospital until the risk of contracting Covid frightened many into cancelling their appointments.

‘For some miracle people weren’t having surgeries so I was able to have mine earlier,’ she said.

‘Otherwise I would be sitting here today with cancer, not knowing. Who knows how much further it would have spread.’

Ms Royed has been sharing her cancer journey on Instagram and said she has spoken to countless women living through the same nightmare.

She urged men and women to be vigilant with their health and get tested for the three types of cancer that are screened for in Australia, which are breast, cervical and bowel.

‘Cancer does not discriminate,’ she said.

Tehran: Suspending the additional protocol does not mean our withdrawal from the nuclear agreement