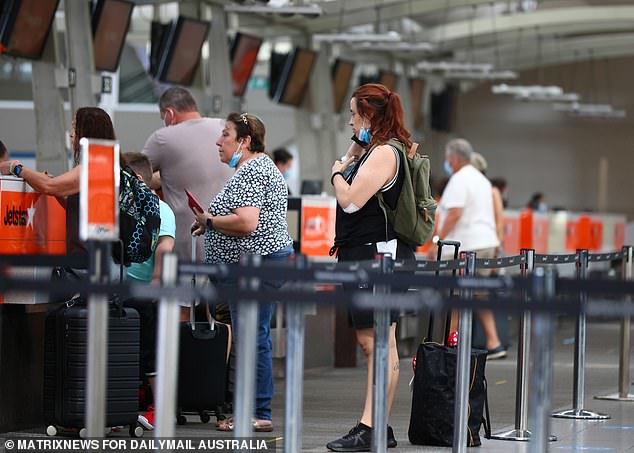 Sydneysider is kicked out of Queensland and fined $4,000 after falsely telling cops he was a Gold Coast local so he could spend Christmas with his mum

A Sydneysider’s plans to celebrate Christmas with his parents on the Gold Coast were abruptly cut short after he was busted lying about his address on his border declaration pass.

The interstate visitor, 37, was fined $4,003 and booted out after police discovered he lived in Rose Bay in Sydney’s eastern suburbs after he put down a Queensland address when he arrived by plane earlier this week.

He went into quarantine at his parents’ home on the Gold Coast after flying into Coolangatta a few days ago.

The man’s interstate holiday has since ended after police discovered ‘he had no actual right to be in Queensland at this time’.

A Sydney man has been kicked out of Queensland after lying about his address on his border declaration pass. Pictured are travellers at Sydney airport earlier this week

‘Police did some further checks on that man and found that he had another border pass in the system that he’d made an application for, outlining a NSW address,’ Gold Coast Chief Superintendent Mark Wheeler told reporters on Friday.

‘The man was initially put into home quarantine and then two days later we were able to establish that he actually came from Rose Bay and was not a Queensland resident.

‘Unfortunately for that gentleman, a $4,003 fine was issued and he was shown the door to the state.’

It comes as Queensland recorded two new cases on Friday, including a second person traveling on a superyacht in the state’s north, which is now at the centre of a police investigation.

The other case was a recent international arrival in hotel quarantine in Brisbane.

The visitor lied on his border declaration after flying to the Gold Coast from Sydney. Pictured are passengers lining up to be screened after arriving at Coolangatta airport earlier this week

Queensland reinstated NSW border checkpoints on Tuesday to turn away Sydneysiders amid a growing coronavirus outbreak on the city’s northern beaches, which currently stands at 118 cases.

Premier Annastacia Palaszczuk announced the return of border closures on Monday after almost 200 Sydneysiders were caught trying to get into the state illegally last weekend.

Regional NSW residents are welcome to cross the border but anyone from Greater Sydney will be turned away.

Around 420 people in 190 cars had been turned around at road border checkpoints on the Gold Coast in the last three days.

Police warn motorists to expect delays at border checkpoints on Boxing Day and during the long weekend.

There are plans to set up a fourth border checkpoint to help ease delays.

A motorist displays their  border passes as they pass through the Queensland/New South Wales border checkpoint, where Sydneysiders are being turned away

The “old guard,” the password … CNN comments on Biden’s choices to form the US administration