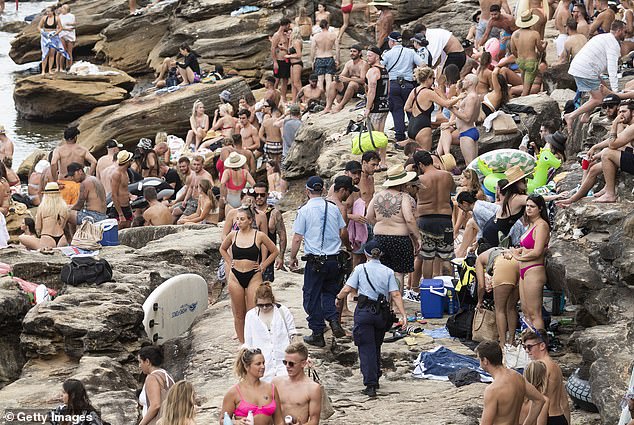 Wild scenes broke out on Sydney’s eastern beaches on Australia Day, with the sand crawling with people by late afternoon as temperatures soared beyond 34C.

Further footage shared from Lilli Pilli in Sydney’s south showed partygoers tethering their boats to one another as they danced and partied on the sandbank.

Police deployed additional officers across Bondi, Coogee and Bronte in an attempt to keep additional numbers under control. 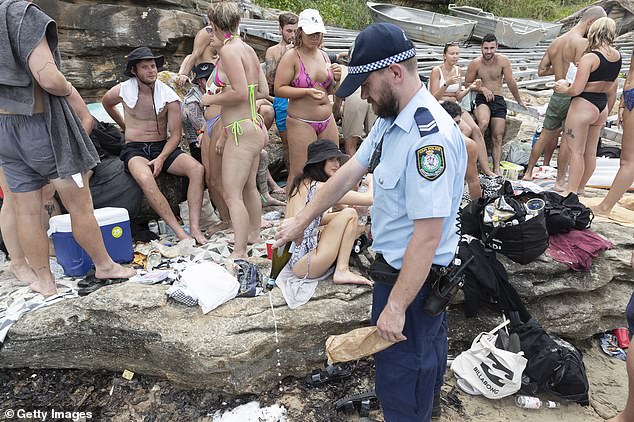 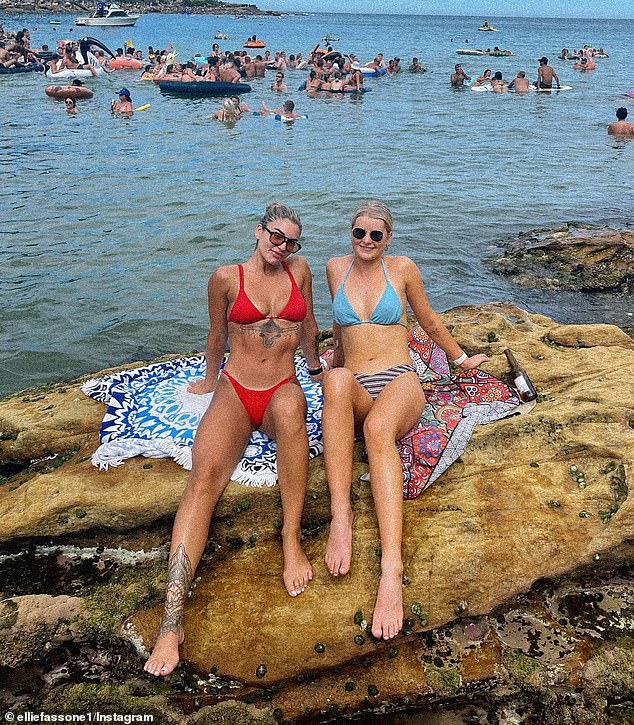 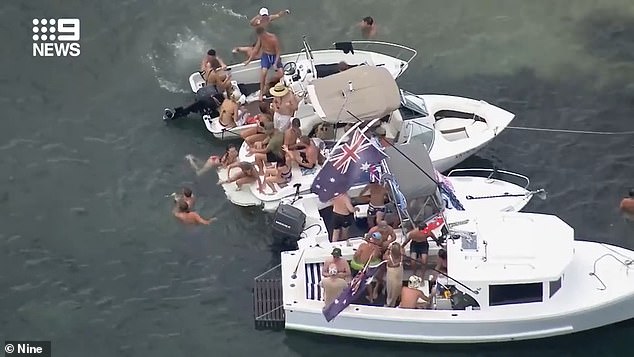 Crowds appeared to totally ignore social distancing restrictions as they sunbathed close together and swam in the water.

Others were furious that large groups weren’t dispersed, even as protesters were warned they could not go ahead with organised events.

A protest organised on Gadigal Land was cancelled after police allegedly said they would react ‘with force’.

But organisers were livid after seeing pictures taken at Gordon Bay and the peaceful response from local officers.

‘Just saw a photo of Gordons Bay. Place is teeming with people. No social distancing. ‘The threat by police towards those who are marching on Gadigal is driven by racism, nothing to do with public health and safety orders.’

But a NSW Police spokesman told Daily Mail Australia crowds appeared to be on their best behaviour for the celebrations. 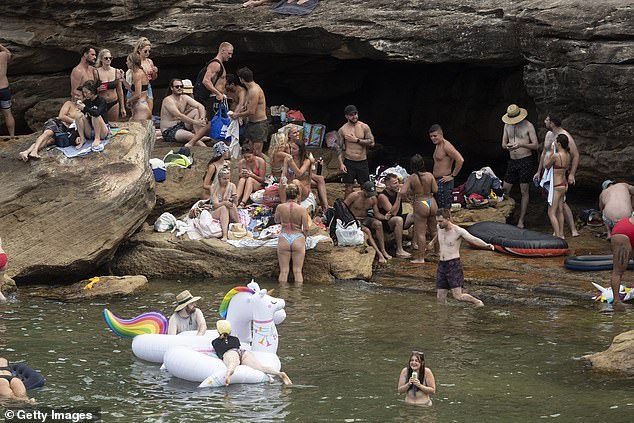 Crowds appeared to totally ignore social distancing restrictions as they sunbathed close together and swam in the water (pictured, crowds packed together at Gordons Bay) 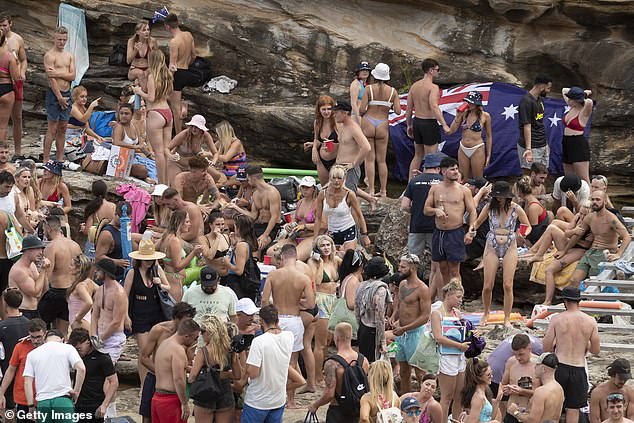 Others were furious that large groups weren’t dispersed, even as protesters were warned they could not go ahead (pictured, crowds packed together at Gordons Bay) 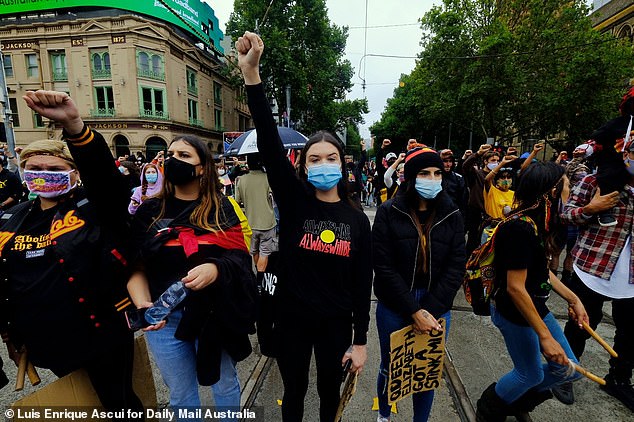 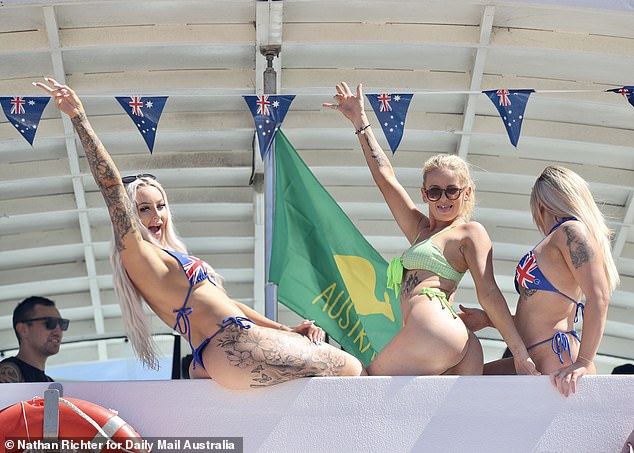 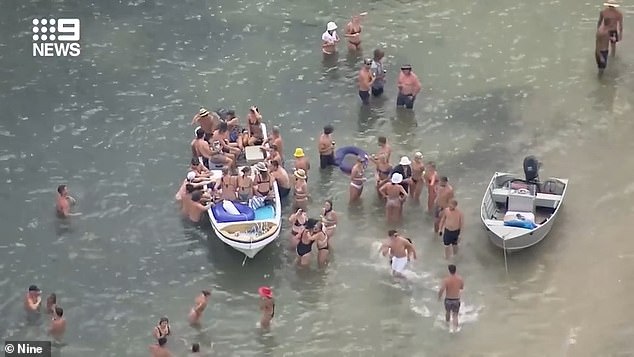 A similar event occurred in Lilli Pilli in Sydney’s east, as boats were tethered to shore and beachgoers crowded the sand banks

A similar event occurred in Lilli Pilli in Sydney’s south, as boats were tethered to shore and beachgoers crowded the sand banks.

A significant amount of boats were tethered together as partygoers gathered on the shore.

‘They were drinking alcohol and gathering too closely together,’ a NSW police spokesman said, but no arrests or fines were issued.

In fact, police said they were particularly pleased with the behaviour of attendees. Two males were temporarily detained for breaching the peace but later released without charge. 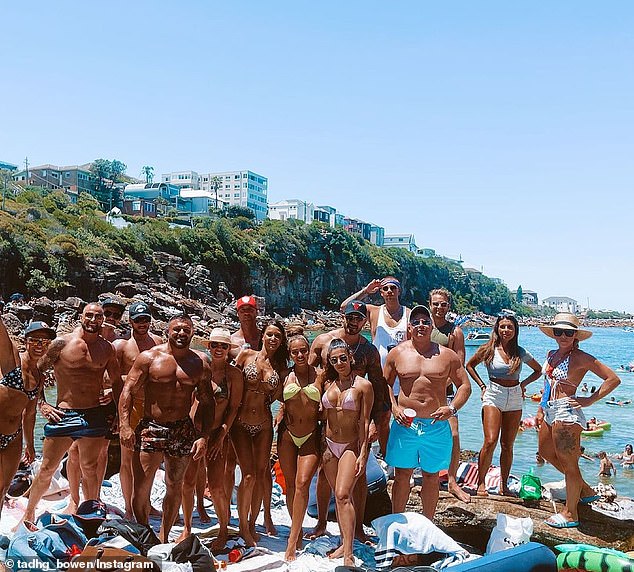 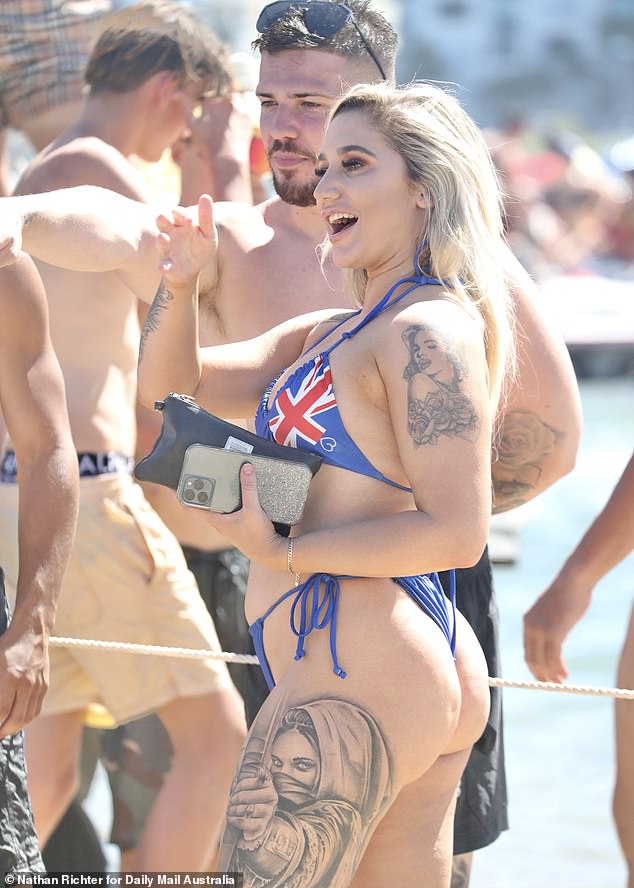 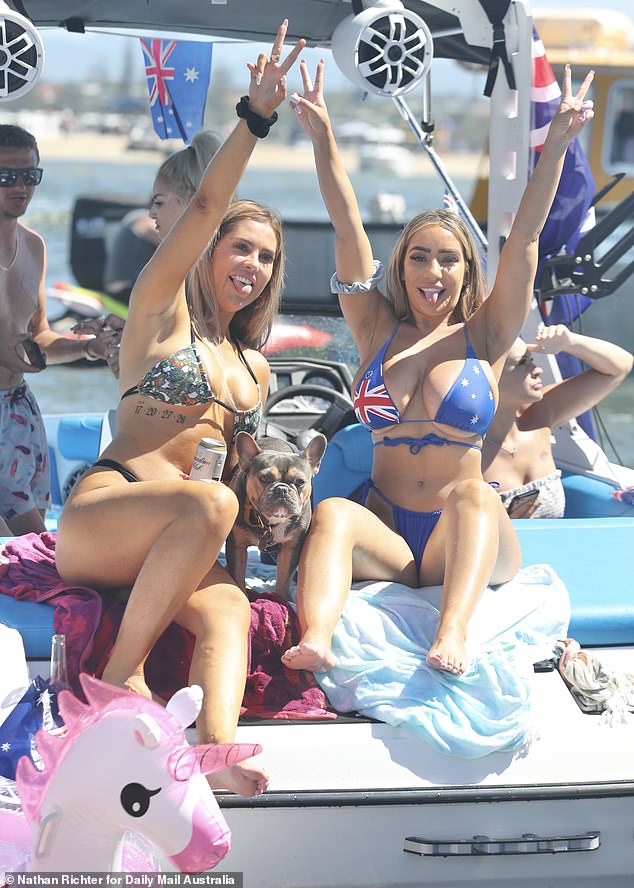 Police said a comprehensive overview of fines and arrests would be issued later on Tuesday.

‘We put an end to the party and they all moved along,’ the police spokesman said.

There were thousands who shunned the parties to turn out for ‘Invasion Day’ demonstrations calling for Australia Day to be abolished forever.

A long-running campaign to abolish Australia Day or change the date has a growing number of Aussies feeling uneasy national day celebration.

Indigenous activists, along with many others Australians, regard the day British settlers who first landed in Port Jackson on the First Fleet in 1788 as an event to be mourned, not celebrated.

But while thousands of Australians still carried on the traditional Australia Day cheer with sun-soaked barbecues and a trip to the beach, it appears evident the nation’s appetite for an overtly traditional celebration complete with Australian flags and boxing kangaroos has greatly diminished. 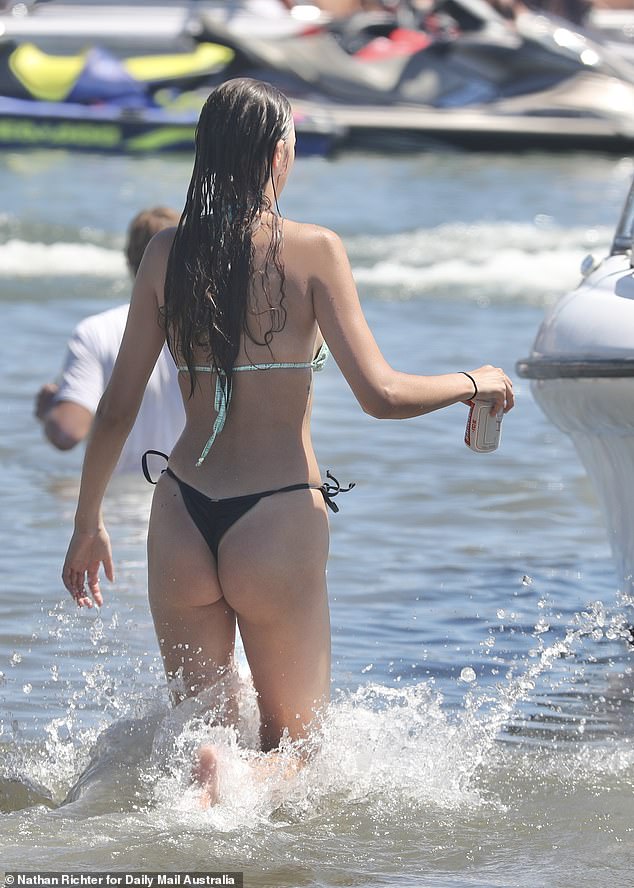 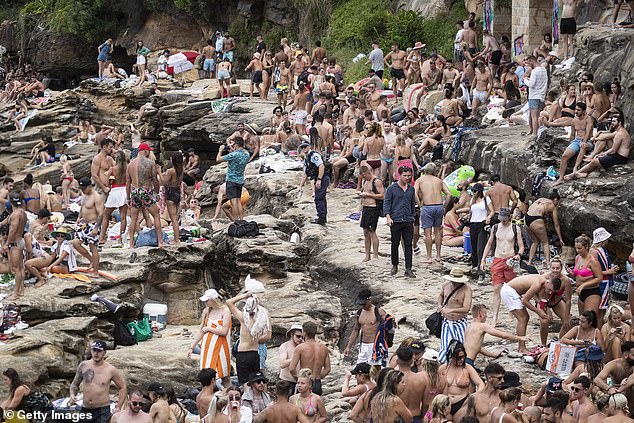 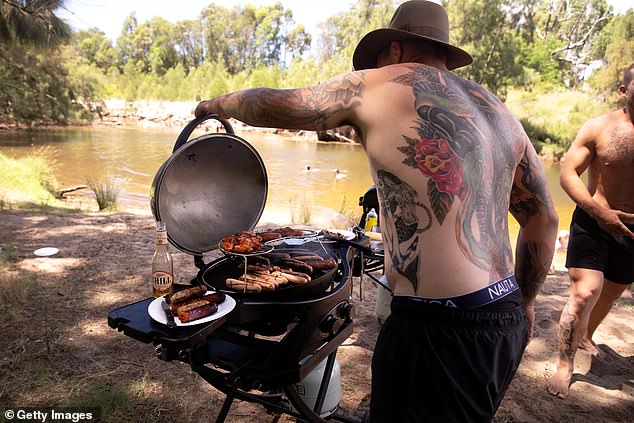 A man checks on the meat cooking on a BBQ next to the river at the Nepean River Reserve in Menangle Park on January 26, 2021 in Sydney

Less than a decade ago supermarkets and stores would stock up on Australiana-themed merch like boxing kangaroo beer coolers and southern cross stickers.

It used to be the norm for everyone from school kids to grown men and women to proudly display temporary tattoos of Australian flags under each check as they celebrated what it means to be from Down Under.

Many young Australians with the day off would be bundled into an afternoon barbecue with mates, a fully stocked esky and Triple J’s hottest 100 blaring across the backyard.

Pubs throughout the country even five years ago would be decorated as though a Crocodile Dundee gift shop had exploded.

But after increased numbers at Invasion Day demonstrations and a number high-profile organisations pulling the pin – the days of the boisterous, nationalist Australia Day celebration are all but over. 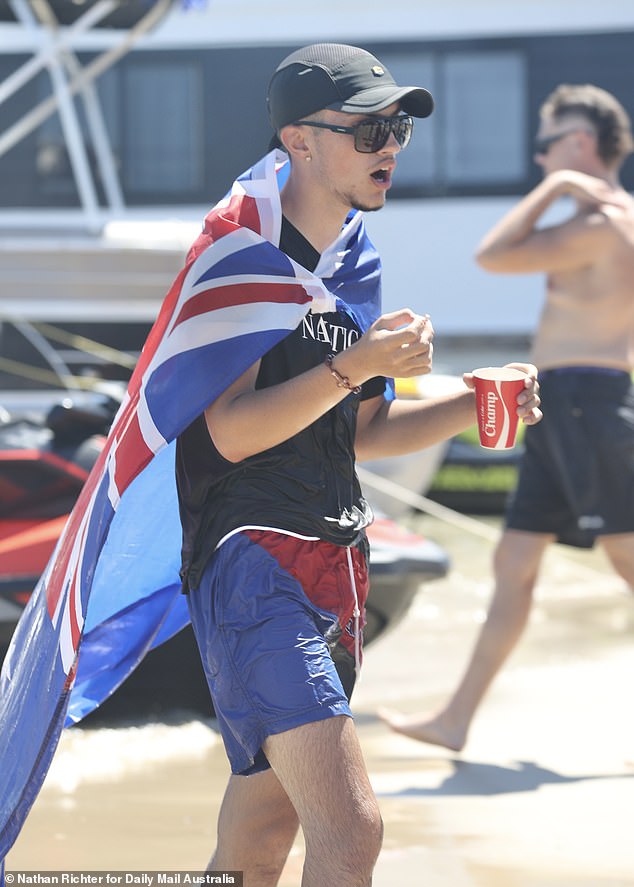 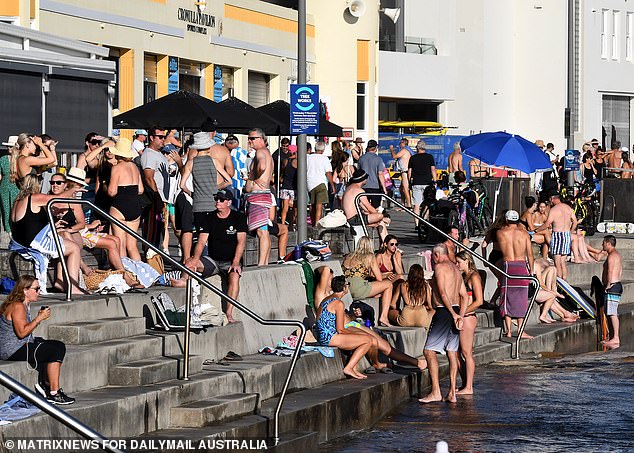 Triple J announced three years ago they would no longer hold the iconic radio countdown on January 26 stating that it should be an event that ‘everyone can enjoy’.

Cricket Australia also made headlines after announcing this summer they would refer to the public holiday as ‘January 26’ celebrations and not Australia Day.

While demonstration across Australian cities were mostly peaceful, some protests turned ugly.

There were four arrests made in Sydney after 5,000 people descended on the Domain near the city’s CBD.

Coronavirus restrictions preventing the huge marches of last year and ones before.

Relations between police and protesters were friendly during most of the event, with officers even snapping selfies with some participants, but turned ugly when some of the crowd moved to Hyde Park after the rally ended.

Four protesters were arrested and dragged away in handcuffs while dozens of officers for med lines and forced them out of Hyde Park. 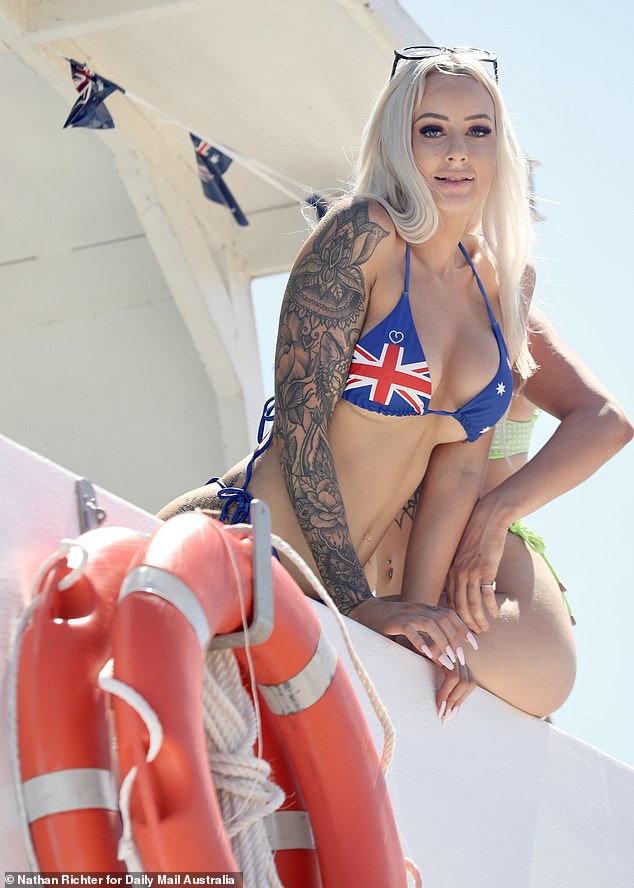 The best Amazon deals this Saturday