Sydneysiders are fined $1,000 on Manly Beach for travelling to the Northern Beaches without an exemption

Two Sydneysiders have been fined after they allegedly breached coronavirus restrictions by trying to enter an area under strict lockdown.

Around 270,000 residents in Sydney’s northern beaches can only leave their homes for four essential reasons amid a growing outbreak which currently stands at 68 cases.

Police minister David Elliott has revealed two Sydneysiders have been slapped with infringement notices after they were caught trying to enter the area without a lawful excuse.

‘After nine months of people living with these restrictions, they still want to run the gauntlet.’ 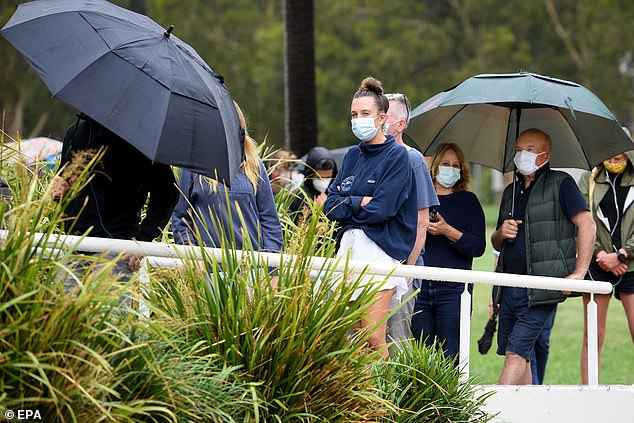 Residents on the northern beaches can currently only leave their homes for four essential reason. Pictured are residents lining up to be tested in Avalon on Saturday

Mr Elliott added police have the resources to enforce the rule if the NSW government makes the wearing of masks mandatory.

NSW Health will provide an update on the cluster on Monday morning, where the number of new cases is expected to rise.

From 11.59pm on Sunday until 11.59pm on Wednesday all Greater Sydney residents can only have a maximum of 10 people in their homes.

There are also new restrictions for venues including a 300 person cap, a one person per four square metre rule and a ban on singing and dancing.

Turkey suspends flights with Britain due to the Corona virus