God, I miss playing music on stage. For me, and for a million other artists as well as everyone who loves live performance, the pandemic has locked away one of life’s greatest joys.

My wife Dawn says: ‘What you miss is people clapping and screaming at you.’ All right, there’s some truth in that, I’ll admit.

But there’s another side to the story, and it’s something every musician will understand. I’m only completely me when I’m playing music for an audience. 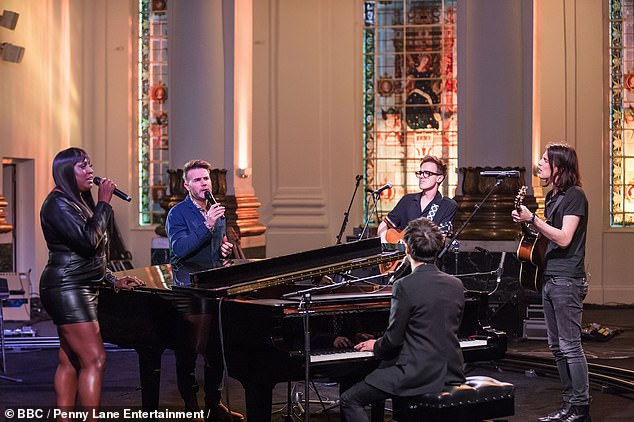 Through successive lockdowns, I’ve been finding ways to keep making live music. On Friday you can sample it for yourself when my supergroup special, I’m With The Band, airs on BBC One

It’s what I’ve done, since I was a teenager gigging in social clubs in the 1980s and trying to keep in time with the bass and the drums.

Nobody was screaming at me then — or if they were, it wasn’t printable.

So through successive lockdowns, I’ve been finding ways to keep making live music. On Friday you can sample it for yourself when my supergroup special, I’m With The Band, airs on BBC One.

It features some people who are genuinely good mates as well as superb musicians, including Jamie Cullum, Mica Paris, Tom Fletcher and James Bay. We’re playing a bunch of songs for the sheer fun of it.

With just two days to rehearse together, I was not at all sure how it would sound. But when we hit the first chord of the opening number, our cover of Blinding Lights by The Weeknd, I felt the reaction in the studio.

Our audience was hairy roadies, operating the lights. I felt the excitement and their pleasure at hearing live music again. It was like a bolt of lightning. Everyone is craving that experience.

When I was young, you could see fantastic live performances on the small screen. There were shows such as The Tube and The Old Grey Whistle Test that had a sense of danger and adventure about them. Every edition was different, because it went wherever the music took it.

The acts on Top Of The Pops might have been miming, the DJs were often cheesy, but that show generated such a thrill — because it was all about the music.

These days, music is often just the manufactured filler. It’s forced into a slot between the video diaries and voting on Saturday night talent contests that seem to have forgotten what real talent is.

I’ve been pleading with TV executives for years to put live music back on screen. I keep hearing the same line: ‘Music doesn’t work on television any more.’

Music always works, I promise you that. I’ve spent my professional life seeing the profound emotional effects that live music produces, whether that’s on a single listener or a crowd of 25,000. 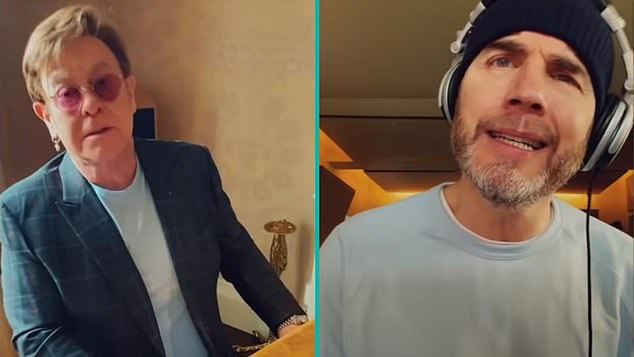 Altogether I taped 90 duets. The last was with Elton John, doing Your Song. After that, I decided to stop. No one follows Elton, and you shouldn’t try

If it isn’t working on TV, that’s because we’re doing it wrong.

The biggest musical event of the calendar now is Eurovision. It’s become our Superbowl. This year, though I couldn’t help being swept up in all the spectacle, I realised that the title is wrong.

They still call it the Eurovision Song Contest … and it’s no longer about the song. What wins the votes is the choreography, the visual drama. If it was only about the music, France should have won, as Barbara Pravi’s number, Voila, was magnificent, just wonderful.

What a great song — but the Italian band Måneskin put on a better show and they won.

That’s why I wouldn’t want to enter. Never mind the fireworks, I’d be thinking most about the song, which isn’t the point of Eurovision any more.

Then there’s the international politics behind the voting. You can’t blame James Newman for coming last — The Beatles would have got nul points this year.

Still, it was amazing to see a live performance in a real auditorium, after more than a year spent on hold.

I have enjoyed some aspects of lockdown. My wife and I have three children and the older two are at an age, 18 and 20, when we might expect to see less of them.

Due to these topsy-turvy times, Dawn and I feel like we’ve stolen some great quality time with all our kids. That’s the upside.

And, I confess I’ve welcomed the chance to slow down and concentrate on the things I love most about my work, such as songwriting. Plenty of artists have told me they feel the same, that enforced downtime has given them the chance to rediscover music they’d forgotten, or to read or paint.

But none of that satisfies the need to perform. As I walked the 50 ft from our home in West London to my studio next door, one day last year, I had a brainwave.

I couldn’t drop in on a friend for a jam session. But we could duet over the phone.

The first person I called was Ronan Keating, from Boyzone. I knew he’d be up for the idea, even if we didn’t take it too seriously. I think it was me who suggested we did Boyzone’s beautiful song, Baby Can I Hold You, which was originally performed by Tracy Chapman. I’ve always been a little jealous that they did that — what an inspired cover.

We were mucking around a bit. Ronan pretended he wasn’t sure when the first verse came in. Then he sang the opening words, ‘I’m sorry…’ and I pulled a serious face. ‘That’s OK,’ I told him.

After that, we got a bit lost in the moment, and sang our hearts out. That song always makes my eyes well up.

The recording was remarkably clean. I did a little mixing in my studio and put the result online, with our phone videos side by side, in a split screen. With everyone learning how to do Zoom calls, I thought our fans might enjoy it.

I wasn’t prepared for what happened next. TV news picked up the story and broadcast a clip. As I was staring in disbelief at my television, my phone went off. ‘Are you seeing this?’ yelled Ronan.

The Crooner Sessions, as we called them, became a sensation… and then went even bigger.

Alfie Boe sang Queen’s Don’t Stop Me Now with me, Robbie Williams and I did our hit Shame, and I was joined by everyone in All Saints to reprise Never Ever. Cliff Richard performed We Don’t Talk Anymore in his bathroom, because he likes the echo. Rod Stewart delivered a roaring take on Rhythm Of My Heart.

All these people were in my contacts menu. I didn’t go through managers or agents to reach any of them — the bonus of 30 years in the business is I’ve got a lot of friends. And because they were as eager to be making music as I was, the enthusiasm was tremendous.

Every morning I was leaping out of bed to see who’d sent me sound files or lists of suggestions from time zones around the world. Some people knew exactly what they wanted to sing straight away — others spent weeks choosing.

A couple really went down the rabbit hole. Queen’s Brian May came up with the incredible concept of a trio…featuring just the two of us. He recorded himself playing the rhythm part of Get Back by The Beatles, then duetted with me over the top of that — him singing and playing lead guitar, me on piano and vocals.

It did my head in, but wow, it sounded good. Brian is a phenomenal musician. When I listen to him play, I understand what it takes to stay at the top for 50 years — as he has. 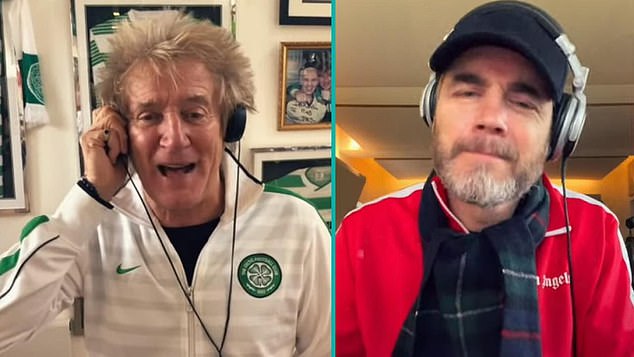 Cliff Richard performed We Don’t Talk Anymore in his bathroom, because he likes the echo. Rod Stewart delivered a roaring take on Rhythm Of My Heart

Altogether I taped 90 duets. The last was with Elton John, doing Your Song. After that, I decided to stop. No one follows Elton, and you shouldn’t try.

That’s the calibre of special guest I dream of seeing join the supergroup. Rod singing The First Cut Is The Deepest, or Baby Jane? I dare any TV suit to see that and tell me, ‘Music doesn’t work on TV any more.’

One of the big changes, especially over lockdown, is that everyone’s listening to everything. The era when last month’s music was irrelevant is long gone.

Thanks to music-streaming services such as Spotify, we’re making playlists from across the decades — a bit of 1990s, some super 1960s, a new release, then an 1980s banger.

I reckon that’s what TV audiences will love too. It makes no sense to see a pop band playing a shortened version of their new single at the end of a chat show. Why not play something else, something wild, a cover version from way back, just because it sounds fab?

That’s how to make music sensational on television again, and that’s what we aim to do on I’m With The Band. In Friday’s pilot, pop sensation Anne-Marie joins us for a funky version of the Bee Gees’ How Deep Is Your Love.

I’ve played that song countless times with Take That, but we’ve never thought of doing it with a wah-wah guitar.

Craig David comes in too, showcasing a couple of his classics, including Seven Days. Singing harmonies with him was a real buzz.

I interviewed both guests for the show too. I’ve no ambitions to be the next Graham Norton or Dermot O’Leary, but I do like talking to musicians about what makes them tick. Those chats stayed in the show because I wanted to give it a late-evening feel, appealing especially to music lovers rather than the broadest possible primetime audience.

Music should be about passion, the joy of hearing something that moves your soul and your feet at the same time.

If we’ve got this format right and the BBC comes back for more, I’ve huge plans for it.

That includes taking a step back myself, on occasion. I daydream about inviting Sting to lead the band one week. It is a supergroup, after all.

And I’m optimistic about playing live venues and getting back on tour later this year, if possible. The first step is to take my solo band on the road.

Then it would be fantastic for Take That to play arenas. But we need the pandemic to be firmly in the rear-view mirror before this happens. No one wants to see a socially distanced crowd of 50 in a stadium that should hold 50,000.

I’ve had fun in lockdown. But I’m ready for it to be over now.

Can gummy sweets improve your health?

Did you know the NHS is about to share your records?

What Are Crypto Trading Pairs? How Do You Choose Them?