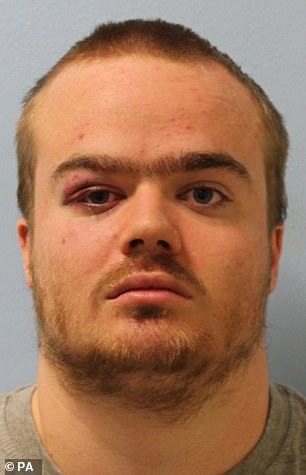 Jonty Bravery, 19, is serving a 15-year prison sentence for attempted murder, but despite repeated violence against others he was not considered a risk and nobody is to blame, a report concluded today

An autistic teenager who threw a six-year-old boy from the Tate Modern was not considered a risk to others at the time, despite at least eight assaults including on other children and police as well as threatening to kill his family

Jonty Bravery even hit a member of his support staff with a brick, threatened to kill his family and punched and racially abused another care worker in a Burger King just six months before the Tate attack.

Bravery was 17 when he told supervisors he was going to visit a local shopping centre on August 4 2019, but instead travelled to the central London art gallery where, after lying in wait, he stalked, snatched and then hurled a young French tourist from the 10th storey viewing platform.

The child survived, but has undergone round-the-clock treatment since, while Bravery, who told horrified onlookers that social services were to blame for the atrocity, is currently serving a 15-year minimum prison term for attempted murder.

A serious case review into Bravery, published today, highlights a series of violent incidents in the two years before he struck, as well as other examples of troubling behaviour including putting faeces in his mother’s make-up brushes or throwing it out of his window at neighbours as well as threatening to kill members of the public.

One support worker said they believed it was ‘only by luck’ he hadn’t killed someone, while Bravery’s attacks were often premeditated and appeared to give him pleasure, especially when he drew blood after he bit another child.

Five months before the Tate attack, he assaulted a member of staff at Burger King in Brighton after punching his care worker, who he also racially abused.  A year earlier he told a support worker he was ‘planning to kill/hurt his stepmother and sister if had an opportunity and wanted to be arrested and go to prison’. But care workers decided that he didn’t mean it and it was attention seeking.

Today’s report, published by Hammersmith and Fulham Borough Council, fails to blame anyone for Bravery being free to attack the poor French boy seeing London from the Tate viewing gallery, where he was grabbed and thrown on to a roof below.

Investigators concluded that Bravery’s violent behaviour had reduced at the time of the Tate Modern attack, while he was living in a bespoke placement with two-to-one care.

The report states: ‘There was no recent evidence that he (Bravery) presented a risk to other children or adults unknown to him.

‘It was in this context that he was progressively given more freedoms, which saw him able to visit central London unaccompanied on the day of the incident.’

But the review also found that, while Bravery’s case was characterised by ‘appropriate efforts by professionals from across agencies to access assessment and treatment for (him)’, those efforts ‘were stymied due to the lack of services, placements and provisions that were suitable for his needs as an autistic young person with a co-existing conduct disorder diagnosis’.

It makes seven findings, including a lack of residential treatment options for young people with high-risk behaviours, emerging personality disorder and co-existing autism, and disincentives for support staff to escalate service gaps, creating an unmet need on behalf of the service user.

The serious case review said Bravery was diagnosed with autism at the age of five, but that there was a clear ‘lack of join-up between different elements of support that were being provided to (Bravery) and his family’, and that he was not known to Children’s Social Care or Child and Adolescent Mental Health Services (CAMHS) until more than a decade later.

Bravery, who was not diagnosed with an anti-social personality disorder until he was arrested for the Tate Modern attack, spent various periods of time being moved from psychiatric intensive care units, specialist residential schools and hotels from the age of 15 as his behaviour became more troubling. 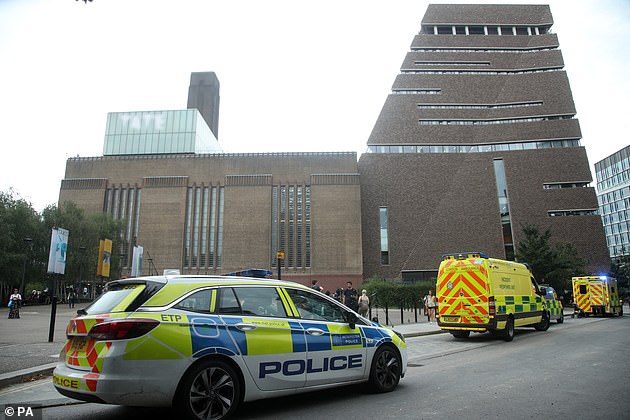 The French boy, who cannot be named for legal reasons, was on holiday in London with his family at the time of the incident. Pictured, emergency crews attending the scene at the Tate Modern art gallery on August 4, 2019 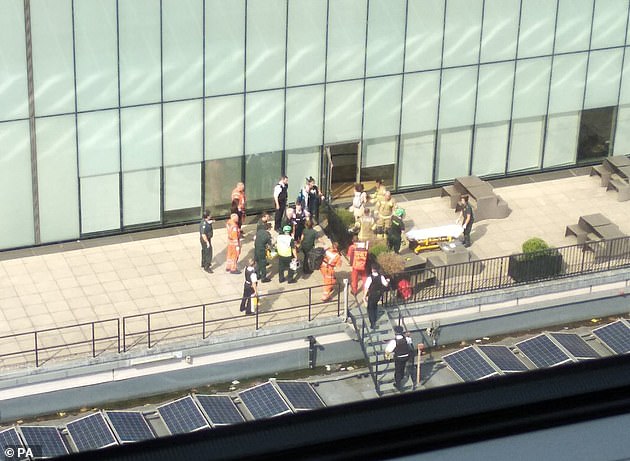 Bravery shoved the boy from the viewing balcony at London’s Tate Modern art gallery in August last year. He was sentenced to life in prison at the Old Bailey in June

His father told the review he felt ‘frustrated’ at the apparent lack of expertise of private care providers in dealing with his son.

A timeline of Jonty Bravery’s movements before and after the Tate attack on August 4, 2019

12.16pm: Jonty Bravery, a then-17-year-old autistic boy living in supported accommodation, leaves his home in Ealing, west London, to buy an Oyster card at a shop on Church Road, Northolt.

12.23pm: He arrives at Northolt Underground station and takes the Tube to London Bridge station.

1.10pm: Bravery arrives at London Bridge station, on the South Bank, and makes his way the short distance to the Shard.

Once there, he asks a member of staff how much it costs to enter but does not have enough money. CCTV footage then shows him walking away before turning back to ask for directions elsewhere.

2.16pm: Bravery arrives at the Tate Modern on foot, speaks to a member of staff and is seen pointing upwards. He then takes the lift to the 10th floor viewing balcony in the visitor attraction’s Blavatnik Building.

2.30pm: CCTV shows Bravery looking over the railings close to where a six-year-old French boy is later hurled.

2.32pm: The victim and his parents arrive on the viewing tower where Bravery has been waiting. The boy skips ahead of his parents briefly, allowing Bravery to scoop him up and throw him over the edge.

Bravery then moves away and can be seen smiling, with his arms raised. The victim’s parents panic – the father challenges Bravery while the mother attempts to climb over the barriers to her son, 100ft (30m) below, before being stopped by witnesses.

Members of the public detain Bravery, remarking he seems ‘calm’ and ‘lacking emotion’. He later is heard saying: ‘It’s not my fault, it’s social services’ fault.’

The review said Bravery was taken to hospital twice in May 2016, once for overdosing on tea tree oil and then for purposefully ingesting paint in an art lesson. His medication was increased and he was treated for two weeks on an inpatient psychiatric unit.

But that unit was said to be an ‘extremely stressful environment’ for someone with autism, as was the psychiatric intensive care unit in northern England where he spent several months – an experience his parents described as ‘extremely damaging to his wellbeing’.

Bravery was then sent to a residential school, where he attacked a fellow pupil after losing a game of 10-pin bowling – the review stated the injuries ‘could have been life-threatening’.

The local authority approached ‘over 60 establishments’ to find a suitable alternative for Bravery, but all ‘either felt that (Bravery) presented a higher risk than they could safely manage, or had no vacancies’, the review found.

He was sent to a specialist children’s home where his brief stay was characterised by ‘several violent incidents’, including one occasion when he assaulted a member of staff with a brick after being told his poor behaviour at a local leisure centre would be documented on his behaviour report.

A few days later, Bravery assaulted a police officer called to his room amid concerns that he was secreting a brick.

The teenager was later sent to live in a flat in west London but had to move to another facility after assaulting a member of care staff by dragging her along the floor by her hair.

A year before the Tate attack, Bravery called police to his flat, saying he was thinking of killing people, during which he assaulted an officer.

The following month he made two claims to support staff that he wanted to go out in the community ‘so that he could assault a member of the public and be arrested and put in prison’.

Staff believed he was making these statements to provoke a reaction from the support worker.

The review said: ‘It is evident that professionals working with (Bravery) at this time did not think he would act on these statements, which were seen as attention-seeking behaviour.

‘This was because all of (Bravery’s) actions were viewed as products of his autistic behaviour and there as no consideration of these threats in a context of conduct disorder.’

Five months before the Tate attack, he assaulted a member of staff at Burger King in Brighton after punching his care worker.

The review said: ‘Unfortunately (Bravery) also had incidents of premeditated instrumental aggression that were not explained by his autism and therefore were unlikely to be resolved through such therapy. 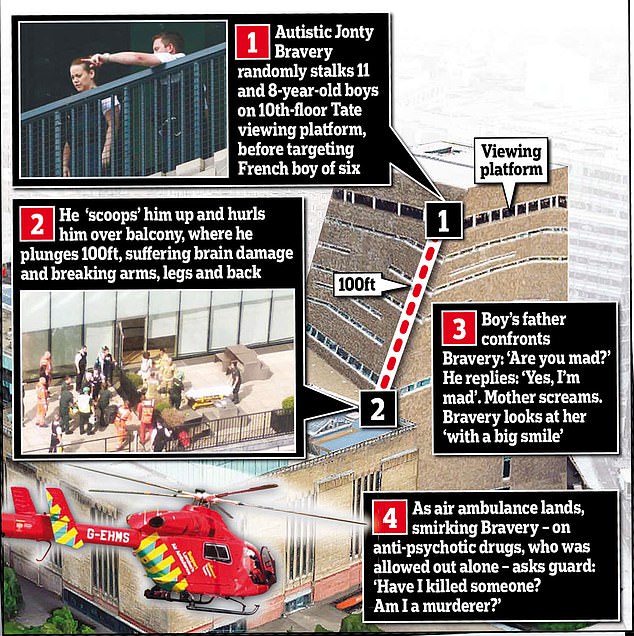 The French boy, who was on holiday with his parents in London, survived the fall from the 10-storey balcony, but suffered life-changing injuries

‘The fact that these incidents were rare, though could be dangerous, made it easier for them to drift from view.’

It found the ‘apparent abruptness of the escalation’ of Bravery’s situation – such as sending him to a psychiatric hospital at the age of 14 – to be a ‘striking feature’ of his case.

It added: ‘The mismatch between (Bravery’s) needs and available provision ran through the whole of (his) case.’

The review said Bravery, now 19, needed residential therapeutic solutions that could enable him, as an autistic young person, to engage in a treatment regime for his conduct disorder.

‘But such a residential option did not exist,’ it added.

‘This meant that the legal frameworks available provided limited options for Bravery at the time.’