Taylor Swift‘s surprise new album Evermore has already been heaped with praise just hours after it was released with critics calling her second record of 2020 a quarantine ‘bubble we may not want to pop’ that is ‘full of unexpected experiments’ and ‘ambitious story songs’.

Swift made the shock announcement about her new album on Thursday just hours before it was released at midnight.

She described the 15-track album as a ‘sister record’ to Folklore, which she produced entirely during the COVID-19 lockdowns and released unexpectedly in July.

That first album, which was a change of style that showed an indie folk sensibility, earned Swift some of the best reviews of her career as well as triggering six Grammy nominations, including for the coveted album of the year.

Her newest album, which is similar in style, is already no different in the review department. 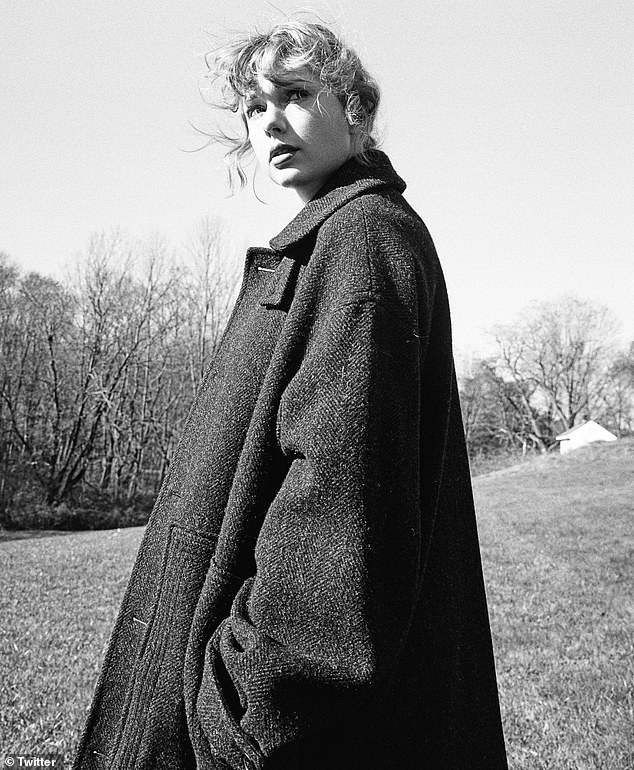 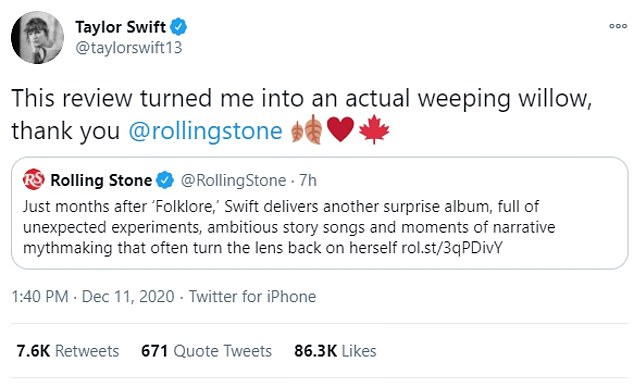 Variety’s Chris Willman called it her ‘second great album of 2020’.

‘It’s an embarrassment of rich, striking albums-ending-in-‘ore’ that she’s mined out of lockdown. This particular quarantine bubble? It’s one we may not want to pop,’ he wrote.

‘As motivations for prolific activity go, relieving and sublimating quarantine pressure is probably even better than revenge. Anyway, this is not a gift horse to be looked in the mouth. Evermore, like its mid-pandemic predecessor, feels like something that’s been labored over – in the best possible way – for years, not something that was written and recorded beginning in August, with the bow said to be put on it only about a week ago.

‘Albums don’t get graded on a curve for how hastily they came together, or shouldn’t be, but this one doesn’t need the handicap. It’d be a jewel even if it’d been in progress forevermore and a day.’

Rolling Stone‘s Claire Shaffer wrote that Swift has deepened her ‘goth-folk vision on the excellent Evermore’.

‘Just months after Folklore, Swift delivers another surprise album, full of unexpected experiments, ambitious story songs and moments of narrative mythmaking that often turn the lens back on herself,’ she wrote.

‘No doubt Swift is still the master of writing a spiteful kiss-off, but the songs of Evermore are a welcomed step in a more mature direction, the result of months and months of her getting lost in the woods and questioning her way forward.’ 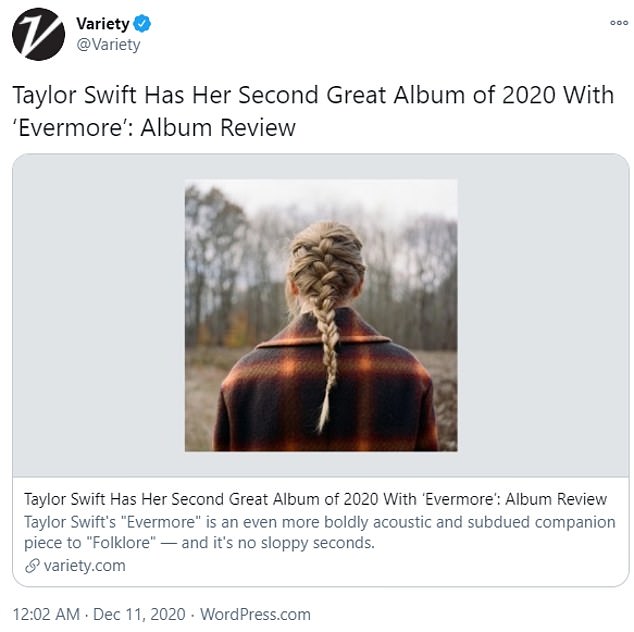 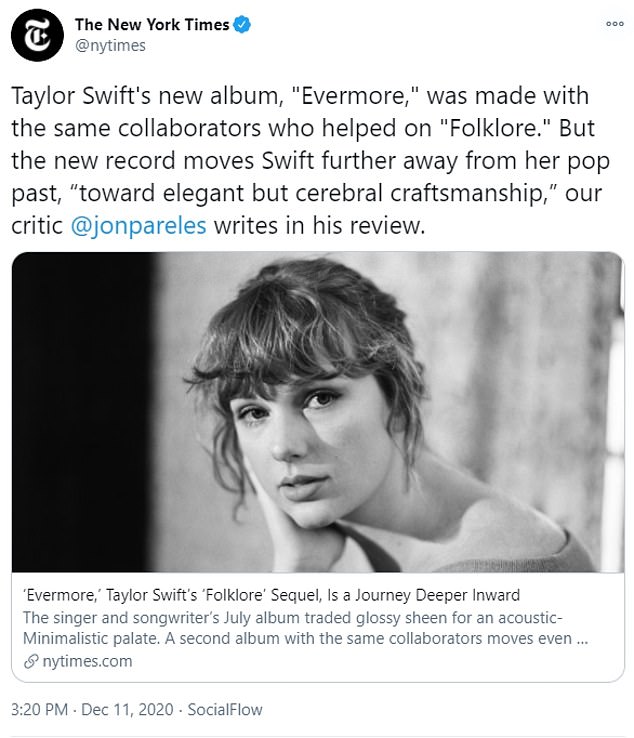 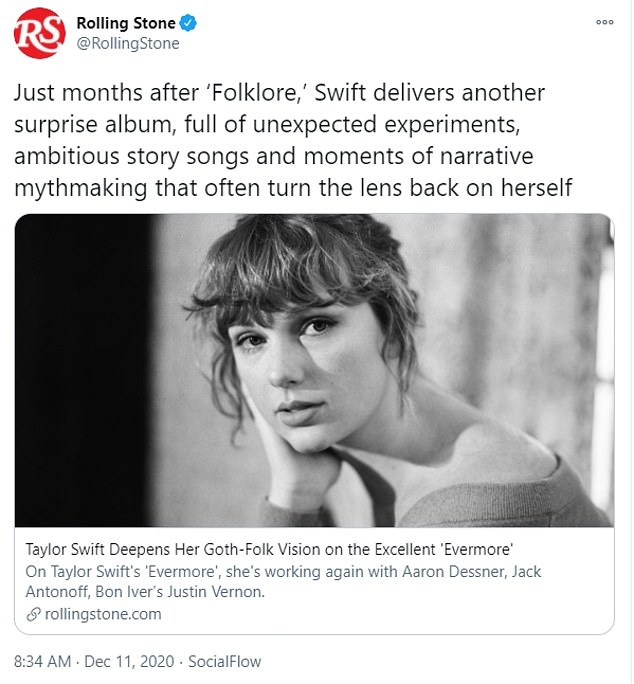 Meanwhile, Jon Pareles of the New York Times noted that Swift was moving ‘even further from her pop past’ with this latest album, which he described as a ‘journey deeper inward’.

‘The sonic details of Evermore are radiant and meticulous; the songwriting is poised and careful. It’s an album to respect. But with all its constructions and conceits, it also keeps a certain emotional distance,’ he wrote.

The Guardian‘s Alexis Petridis described the album as a lockdown over-achievement that is ‘pretty impressive’.

Her fans were also smitten by the new album with Swift trending on social media in the hours after it was released.

Swift tweeted after the release: ‘I have no idea what will come next. I have no idea about a lot of things these days and so I’ve clung to the one thing that keeps me connected to you all. That thing always has and always will be music. And may it continue, evermore.’

Swift had earlier said of her second complete surprise album in five months that ‘we just couldn’t stop writing songs.

‘I loved the escapism I found in these imaginary/not imaginary tales. I loved the ways you welcomed the dreamscapes and tragedies and epic tales of love lost and found into your lives. So I just kept writing them.’

The mysterious William Bowery, who Swift last month revealed was a pseudonym for her British actor boyfriend Joe Alwyn, is also credited as a co-writer on the new album.

The 30-year-old pop megastar dropped the whimsical music video for latest single Willow on Friday morning, at the same time she released her album Evermore, which features lyrics she wrote with boyfriend Joe Alwyn.

While speaking with fans during the Q&A while the video was revealed, Taylor claimed she had written three songs with William Bowery, which is the pseudonym Joe uses while writing with the singer.

Answering a question from a Swiftie, she said: ‘I wrote 3 songs with William Bowery!’

With the release of the album, it has now been revealed she wrote the songs Champagne Problems, Coney Island, and her final track Evermore with Joe.

In the first song, Taylor appears to take on the role of a woman who breaks a man’s heart as she sings the lyrics: ‘Your mum’s ring in your pocket, my picture in your wallet, your heart was glass, I dropped it,’ while in Coney Island, meanwhile, Taylor sang of her own heartbreak. 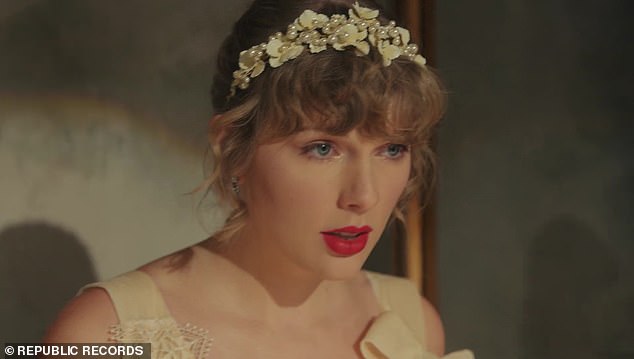 Despite the nature of the lyrics, on Thursday Joe’s family refused to quash the rumours that the actor had secretly married Taylor after she shared a bridal-like snap to promote her new album.

While the Blank Space hitmaker did not refer to a wedding directly, fans took to Twitter in their droves to speculate if she had secretly married actor beau Joe.

And Joe’s family have refused to dispel speculation about any secret union between the loved-up pair, who have been dating since the summer of 2016.

A member of Joe’s family laughed and told MailOnline: ‘I’m sorry, I’m not going to say anything.’

In Taylor’s music video for Willow, where she wears the white dress and which she also directed, the person who plays her love interest is actually a longtime backup dancer of hers.

Taeok Lee joined Taylor on tour for her Red Tour from 2013-14, and he plays her fairytale beau in the new video.

She teased his appearance while chatting with fans during the YouTube premiere: ‘You’ve seen my co-star in this video somewhere before.’

The two have a longtime relationship as in December 2019,  Taeok even shared a cute throwback black and white snap of them together with the caption: ‘A lifetime ago [heart emoji]  #thirtyflirtyandthriving’ 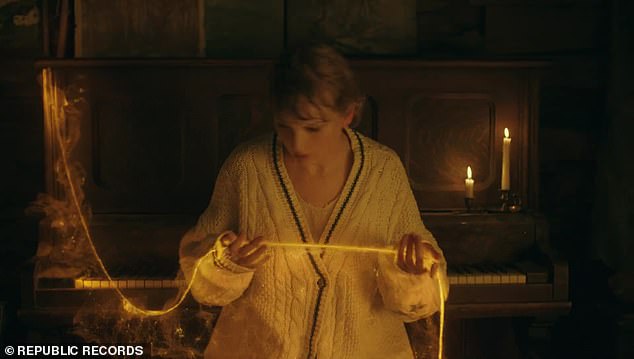 Cozy cardi: The video begins with T-Swift sitting on a piano bench in a chunky white cardigan, as she holds onto a long sparkling gold string 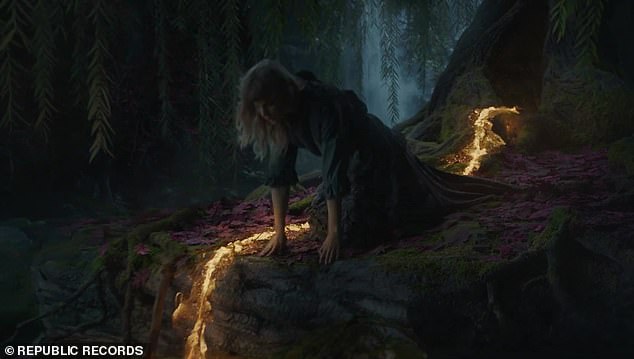 Into the water: Now in a grey Victorian chic dress, she looks into an enchanted pond, where the golden string leads her