Schools that teach ‘white privilege’ could be breaking the law by contributing to the ‘systemic neglect’ of white working-class children from disadvantaged backgrounds, MPs have found.

A report published by the Commons Education Committee last night found that white working-class pupils are one of the worst-achieving groups in the country, and ‘feel anything but privileged’.

It said they are behind many of their similarly disadvantaged peers of other ethnicities at ages five, 16 and 18 – and that ‘politically controversial’ phrases such as ‘white privilege’ may have contributed to poor white pupils being forgotten ‘for decades’.

The report also warned against ‘pitting different groups against each other’ and suggested schools which promote ideas of ‘white privilege’ could be in breach of the Equality Act 2010. 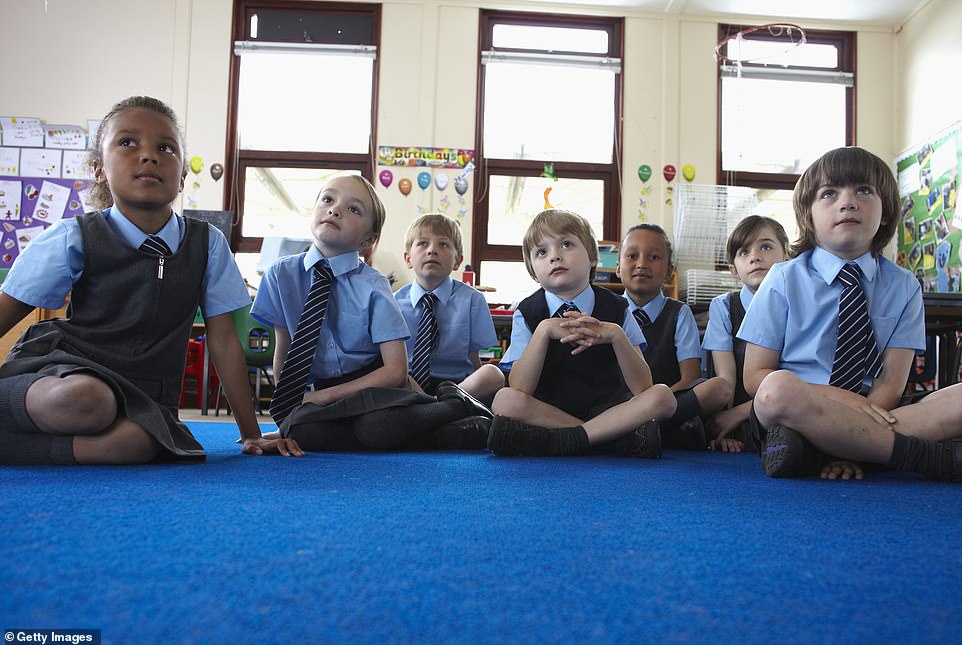 White working-class pupils are one of the worst-achieving groups in the country, and ‘feel anything but privileged’, MPs said in a report 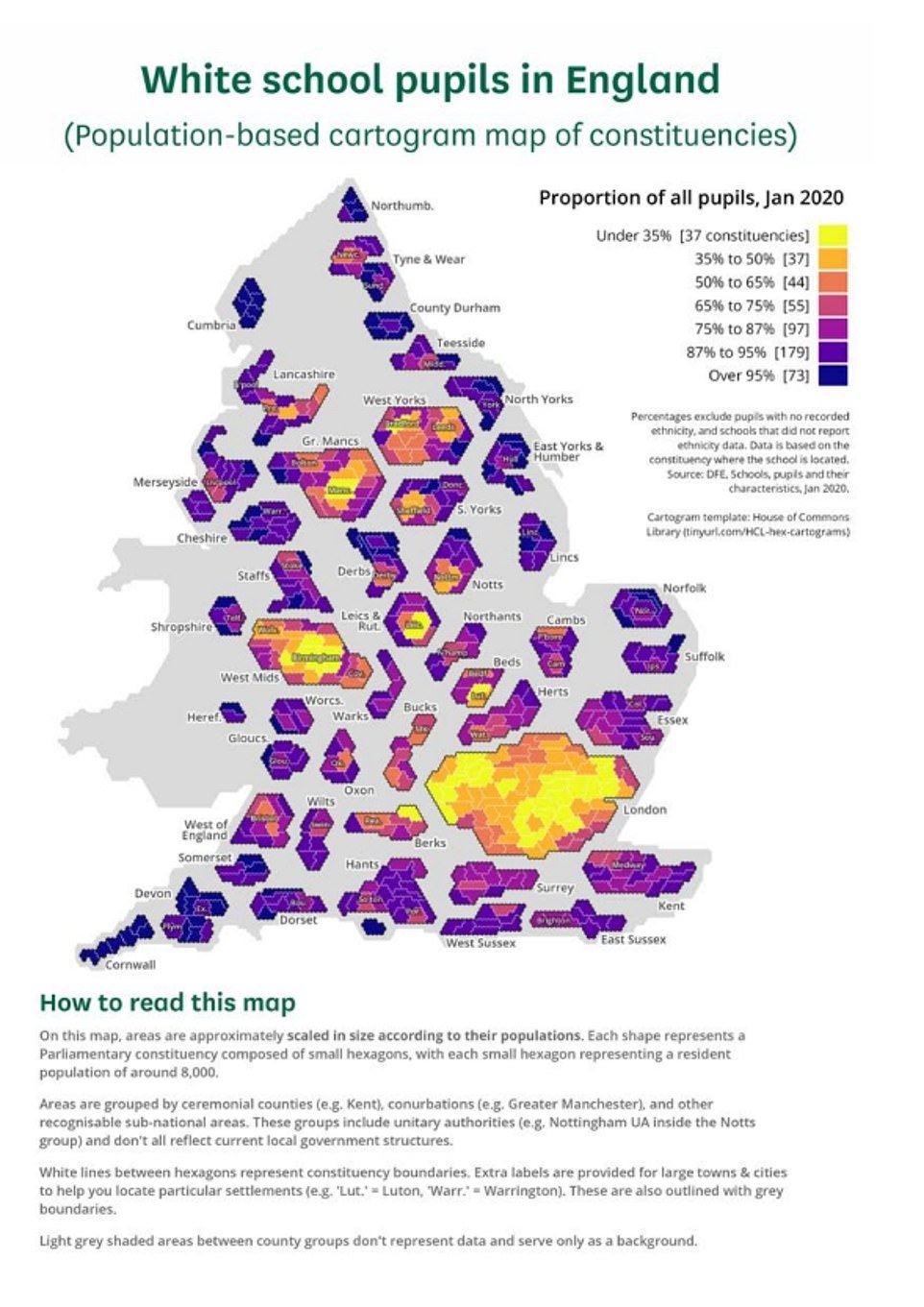 Speaking to the BBC this morning, Robert Halfon said there are a number of factors at play, including geography – where white working-class pupils live in towns that have been ‘left behind because all the money, all the focus has been spent on the big cities’ 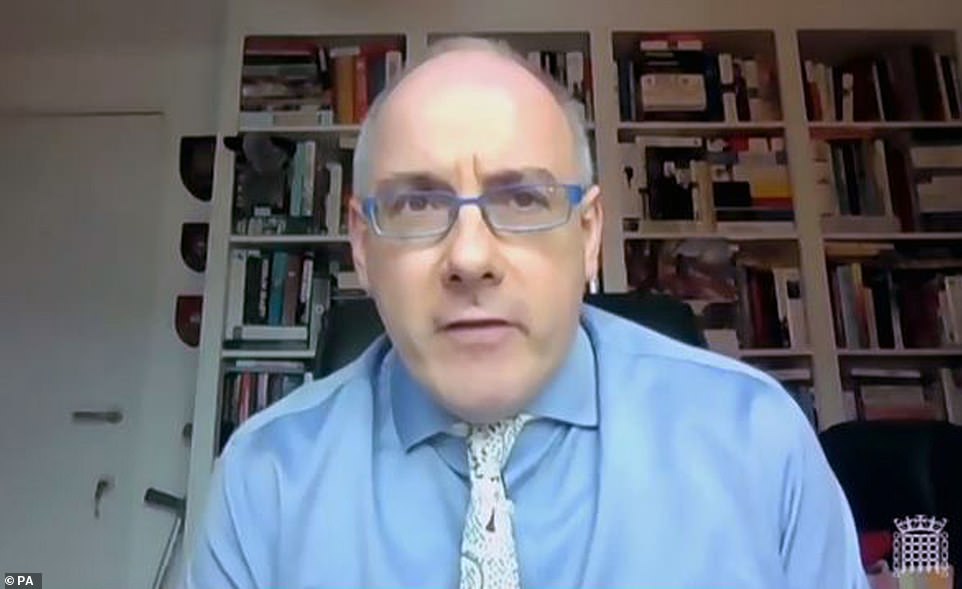 Nearly two in five disadvantaged students are not confident they will receive fair grades that reflect their ability, under the teacher assessment system this summer, a report suggests.

A survey by the Social Mobility Foundation (SMF) charity suggests 52% of high-achieving poorer pupils do not believe they will be able to successfully appeal against any grades that they believe to be wrong this year.

More than a third (36%) of young people questioned are not confident they will receive the grades they need for their chosen career path, or to secure a university place this autumn, the poll found.

The findings come after teachers across England have finalised decisions on their pupils’ GCSE and A-level grades after this summer’s exams were cancelled for the second year in a row.

Teachers are able to draw on a range of evidence when determining pupils’ grades this summer, including mock exams, coursework, and in-class assessments using questions by exam boards.

But the poll, which included more than 1,300 high-achieving disadvantaged sixth formers across the UK, found 38% are not confident they personally will receive fair grades reflective of their ability.

The charity is calling for all UK governments to ensure all Year 13 pupils can repeat a year if deemed appropriate by their schools, and those opting to take exams in the autumn – rather than accepting their teacher-assessed grades – can do so free of charge.

The phrase ‘white privilege’ is used to describe the inherent advantages possessed by a white person on the basis of their race.

It can apply where people are living under the same social, political or economic circumstances, or in a society where there is racial inequality.

He said the term was ‘wrong-headed’ because it ‘says there is collective guilt when it should be individual responsibility for racists acts’.

‘Its wrong-headed because it says there is collective guilt when it should be individual responsibility for racist acts.

‘All the data shows white working-class boys and girls on free school meals from disadvantaged backgrounds underperform at every stage of the education system compared to most other ethnic cohorts.’

Asked how ‘white privilege’ could be relevant, he went on: ‘What were saying is that is the wrong way, it’s a wrong-headed way to describe and deal with racism because it pits one group against another. One of the reasons we found that white working-class boys and girls are struggling in education is because the families have been disengaged from the education system, and we believe this concept of ‘white privilege’ perpetuates that.’

When asked if he was trying to create a culture war, Mr Halfon said: ‘I’ve never engaged in the culture wars, all I care about is, as our committee does, is addressing the decades of neglect that have led to a situation where white working-class boys and girls from disadvantaged backgrounds are underperforming.’

Speaking to the BBC this morning, Mr Halfon also said there are a number of factors at play, including geography – where white working-class pupils live in towns that have been ‘left behind because all the money, all the focus has been spent on the big cities’.

He also warned that some families were ‘disengaged from education’ in areas where ‘there is often a lack of community, a lack of social capital as well’.

Asked if there was a danger of a situation arising in which there were schools for the rich and schools for the poor, Mr Halfon said: ‘That’s exactly what were trying to stop, that’s what’s happening at the moment.

‘The culture of many white working-class communities is vocational, its in favour of skills and apprenticeships and what we’re saying is that subjects like design and technology should be introduced to the curriculum.

‘Schools should teach careers advice properly about apprenticeships and skills, which is not happening.

‘Only 16 per cent of white working-class boys and girls on free school meals go to university. That’s the lowest compared to every other ethnic group. Just 16 per cent.’

Mr Halfon said: ‘So far, the Department for Education (DfE) has been reluctant to recognise the specific challenges faced by the white working class, let alone do anything to tackle this chronic social injustice. This must stop now.

‘We also desperately need to move away from dealing with racial disparity by using divisive concepts like white privilege that pit one group against another.

Disadvantaged white pupils have been badly let down by ‘muddled’ policy thinking, the report said.

It found that among five-year-olds, only 53 per cent of poor white British pupils meet the expected standard of development, one of the lowest percentages for any disadvantaged ethnic group. 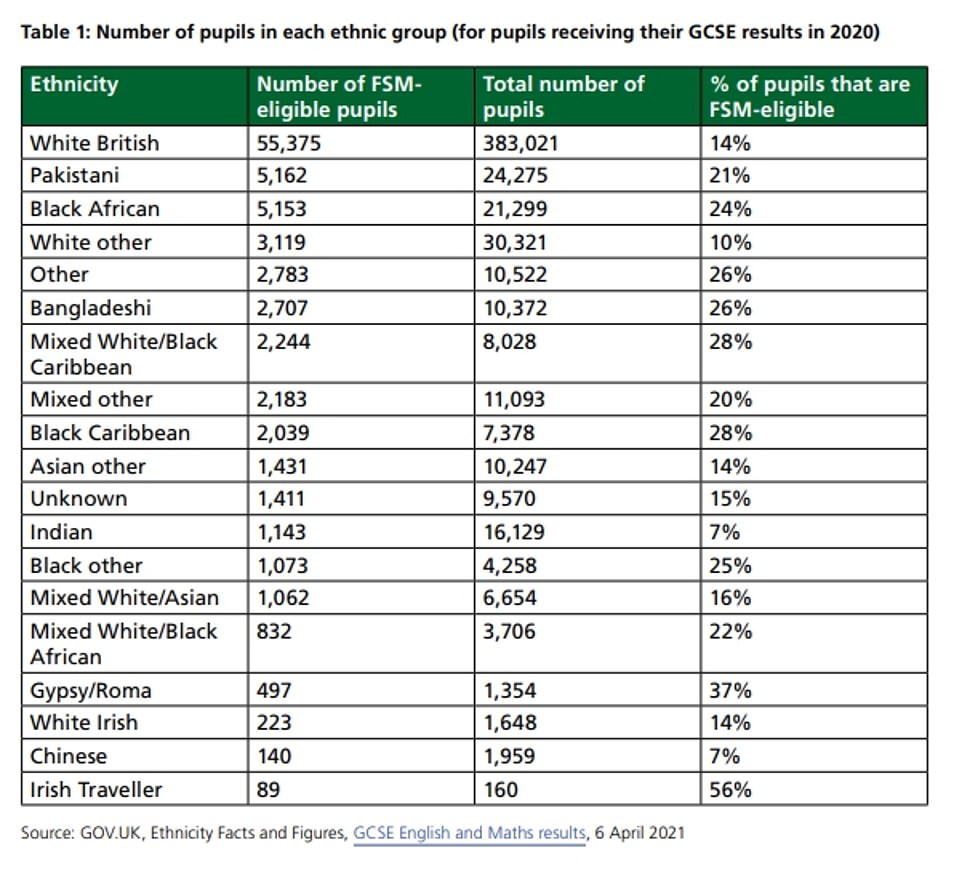 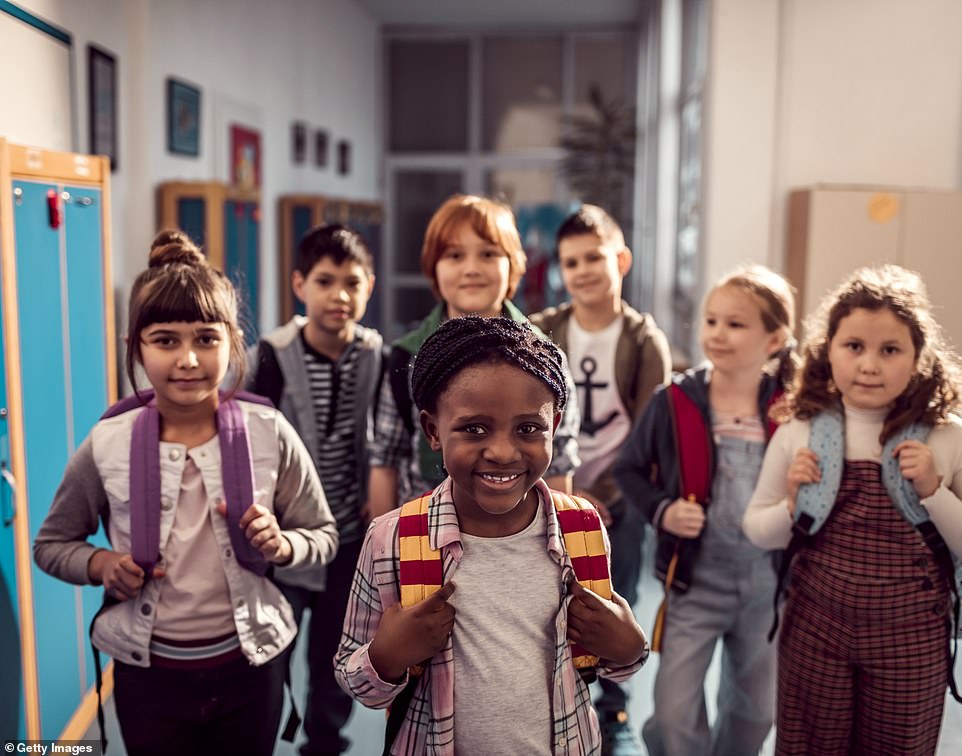 At GCSE, just 17.7 per cent of poor white British pupils achieve grade 5 or above – the equivalent of a C – in English and maths, compared with 22.5 per cent of poor pupils from all ethnicities.

And the proportion of poor white British pupils going to university is 16 per cent, the lowest of any ethnic group other than travellers.

The inquiry authors defined ‘poor pupils’ as those who were eligible for free school meals.

The MPs said they were not convinced by the DfE’s claim that the gap in attainment can be attributed to poverty alone. Other factors include poor parental experience of education and multi- generational disadvantage.

Tory MP Mr Halfon added: ‘For decades now white working-class pupils have been let down and neglected by an education system that condemns them to falling behind their peers every step of the way.

‘There has been muddled thinking from all governments and a lack of attention and care to help these disadvantaged white pupils in towns across our country.’

He called on ministers to stop ‘sweeping the problem under the carpet’ and find ways of closing the attainment gap. 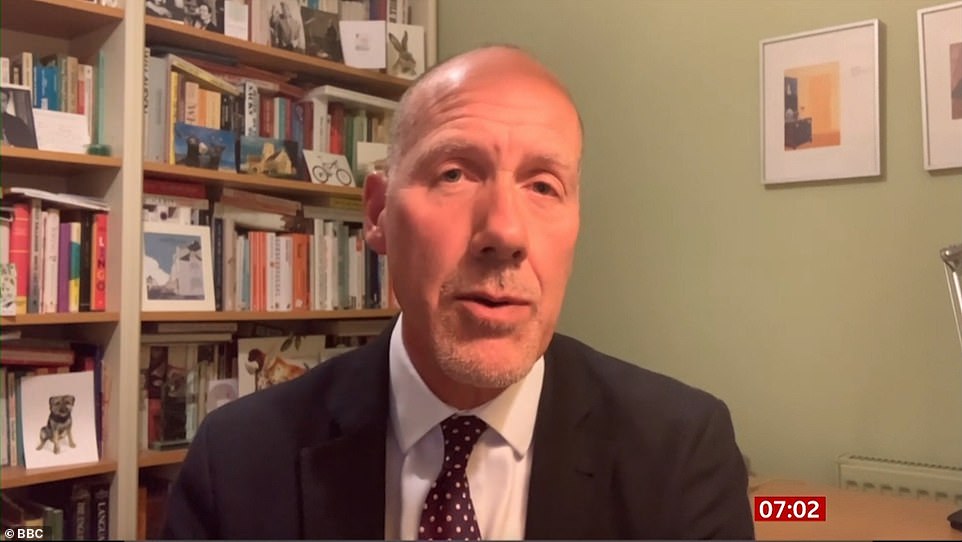 Geoff Barton, general secretary of the Association of School and College Leaders, said schools ‘do a very good job in providing opportunities for discussion around issues in a sensitive, balanced and measured way’

‘Never again should we lazily put the gap down to poverty alone, given that we know free school meal eligible pupils from other ethnic groups consistently outperform their white British peers,’ he added.

The committee recommended setting up a network of ‘family hubs’ to help parents engage in their child’s education.

Geoff Barton, general secretary of the Association of School and College Leaders, said: ‘We’re not quite sure why the committee has chosen to enter the debate about the widely discredited report from the Commission on Race and Ethnic Disparities, and the term ‘white privilege’.

‘This does not seem helpful and is likely to divert attention from the rest of the report.

‘Schools are well aware of their responsibilities and do a very good job in providing opportunities for discussion around issues in a sensitive, balanced and measured way.’

A Department for Education spokesman said: ‘This Government is focused on levelling up opportunity so that no young person is left behind.

‘That’s why we are providing the biggest uplift to school funding in a decade – £14 billion over three years – investing in early years education and targeting our ambitious recovery funding, worth £3 billion to date, to support disadvantaged pupils aged two to 19 with their attainment.’