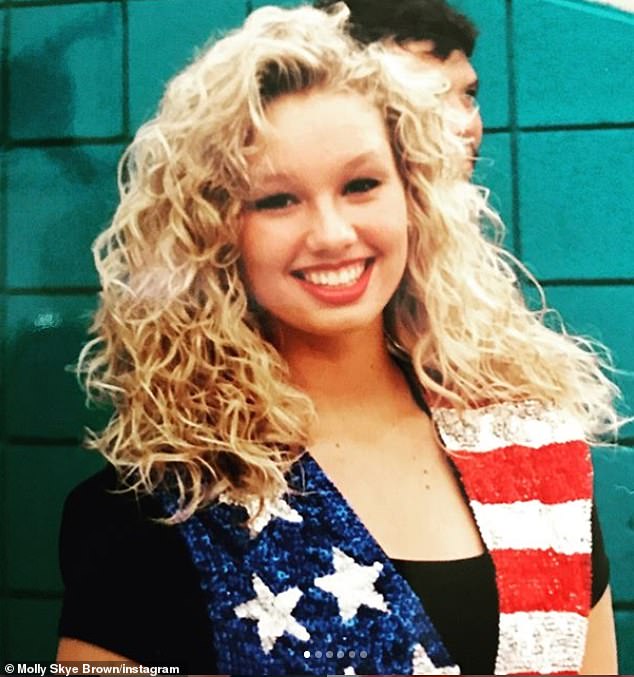 A former teen beauty queen claims Ghislaine Maxwell tried to recruit her as a masseuse for Jeffrey Epstein while she was working out at a Florida gym when she was just 14.

Molly Skye Brown, now 42, went to the FBI last year to tell her tale of meeting Maxwell, Epstein’s alleged madam who is currently jailed on sex trafficking charges, in 1992, when she was still in high school.

She said the encounter took place at a gym inside a childcare facility in Palm Beach, near the billionaire pedophile’s mansion, where she had a part time job that gave her a free membership to the workout facility.

‘I was 14, I was starting to get more into modeling, acting, singing and pageants with the expectation of making some scholarship money or grant money to further my education,’ Brown, a child rape survivor who hosts a podcast called ‘Let’s Be Frank’, told The Sun.

‘I was on the elliptical machine working out, which is by the front window. I was half-naked, a young girl with an exercise outfit on, showing my body. I saw Maxwell walk by and she stopped. I was the only one in there.’ 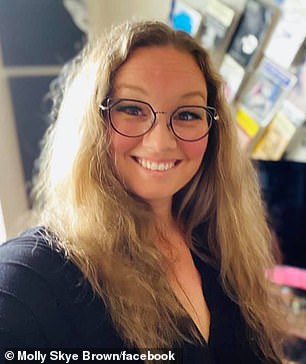 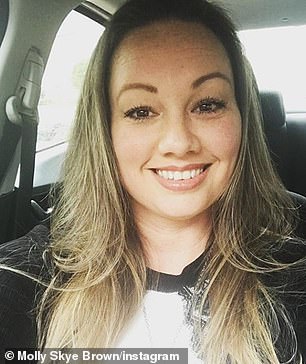 Brown, now 42, said she reported Maxwell to the FBI last year – nearly 27 years after their encounter at a gym in Palm Beach. She is pictured in two recent photos 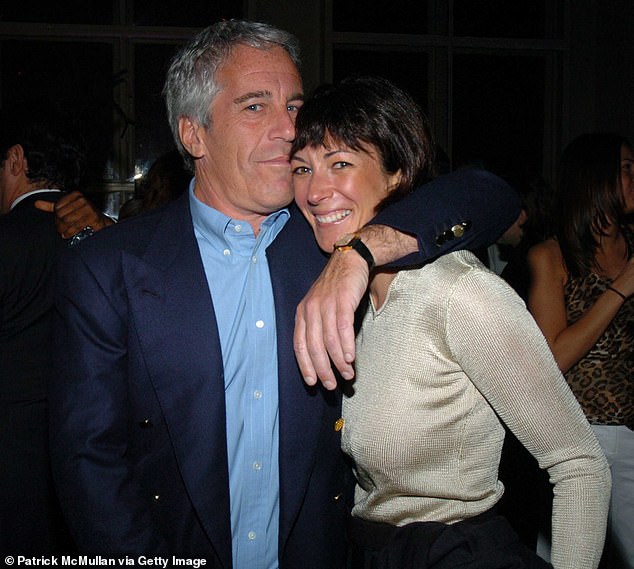 Maxwell is currently behind bars on sex trafficking charges. The British socialite is accused of helping recruit and groom dozens of young girls for Epstein (pictured together in 2005)

Brown continued: ‘[Maxwell] looked me up and down, then came into the gym, walked to the front counter and I could hear her say: “I’m not going to be long, I just want to talk to this girl.”‘

She said Maxwell then walked up to her and handed her a business card.

‘She walks towards me and hands me her business card. She introduced herself, said she was a modeling scout and asked: Do I do any modeling? I said I did,’ Brown recounted.

Brown claimed that Maxwell went on to offer her a masseuse job and promised that she could help the teen get a modeling contract from Victoria’s Secret.

But Brown was apprehensive from the start, since she suffered from congenital hip dysplasia and knew she wouldn’t be able to walk as a model.

‘I’ve had reconstructive surgery, but my knees are dislocated, I limp and I’ve already been told by professional agencies that I was never catwalk modeling material,’ she said.

‘I told Maxwell I really preferred acting, singing and musical theater. She said: “Well, if you change your mind, I have a lot of modeling opportunities.”

‘It was going in one ear and out the other.’ 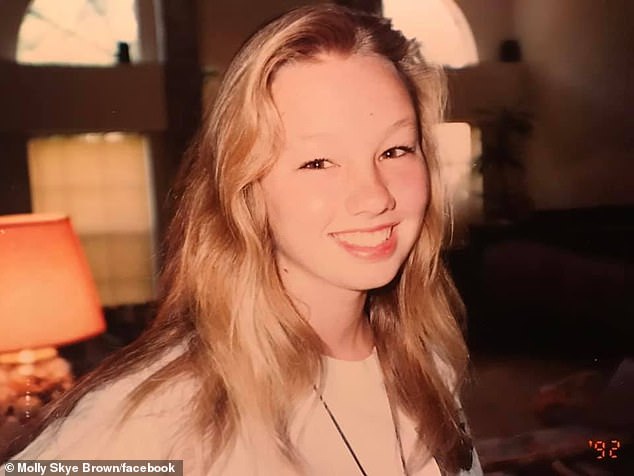 Describing herself at the time when Maxwell approached her, Brown said: ‘I was 14, I was starting to get more into modeling, acting, singing and pageants with the expectation of making some scholarship money or grant money to further my education’ 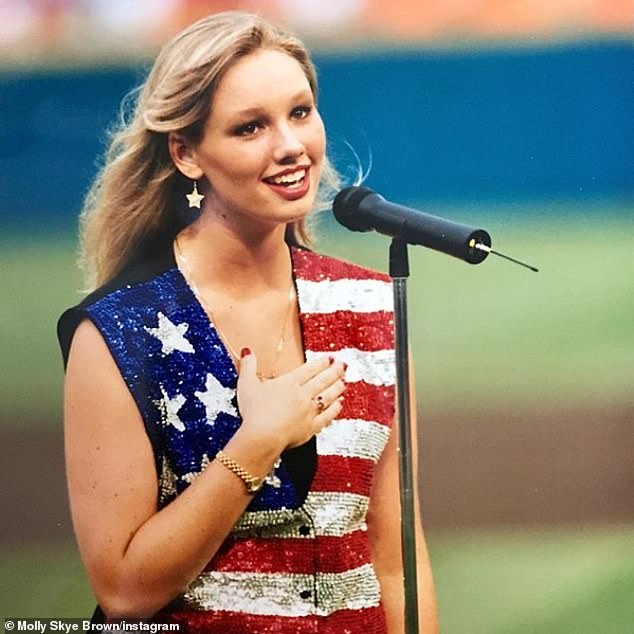 Nearly 30 years later, Brown sees the experience in a whole new light as Maxwell sits behind bars awaiting trial on charges she helped groom dozens of young girls for Epstein.

‘She was just a predator prowling the streets I have no doubt. I’ve now had others tell me that I’m exactly the type. I fit the bill perfectly,’ Brown told the Sun.

She said that she later heard stories about Maxwell prowling around Orlando’s Altamonte Mall making similar promises to other young girls.

‘Another girlfriend of mine told me that Ghislaine used to come up to scout up there. She’d be roaming the shops, handing out her card. It happened regularly,’ Brown said.

Brown hopes that by sharing her story she can help encourage other sexual assault victims to come forward and seek justice.

Dozens of women have accused Epstein of raping them at his many properties around the world, and many have described Maxwell as the millionaire’s chief enabler.

Epstein, 66, was facing sex trafficking charges in Manhattan when he killed himself in August 2019 while awaiting trial.

Ghislaine, 58, went on the run after Epstein’s suicide and was finally arrested at her compound in New Hampshire in July.

She is accused of enticing underage girls to travel for sex, actually having sex with them and Epstein and later lying about it under oath in depositions when she was being sued by Virginia Giuffre Roberts, one of Epstein’s accusers who says she had sex with Prince Andrew when she was 17.

Maxwell pleaded not guilty to the charges against her and is being held at the Metropolitan Detention Center in Brooklyn until her trial. 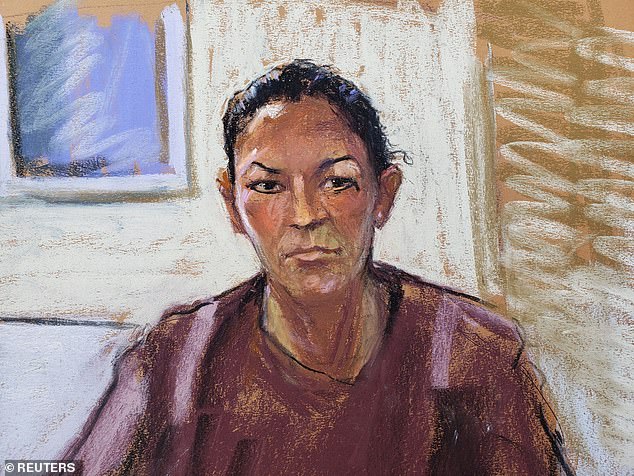 Latest Hawaii travel restrictions: What you need to know